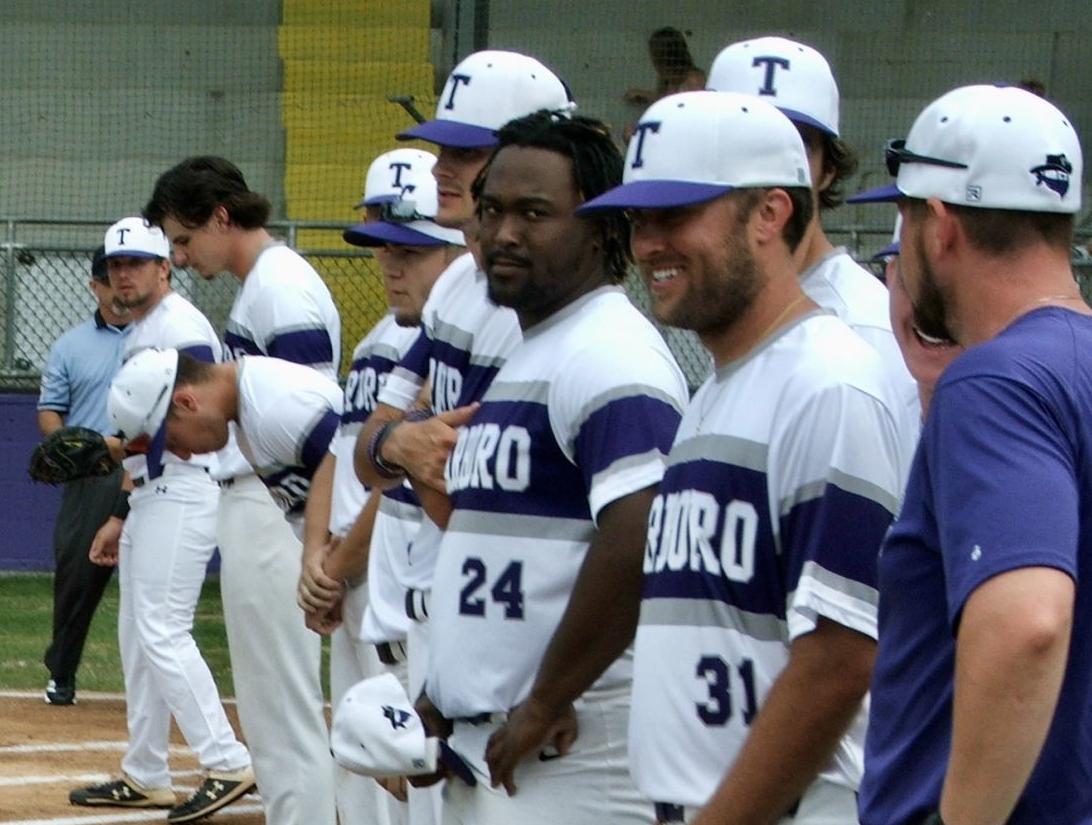 The Tarboro River Bandits line up down the third base line prior to the start of Wednesday’s home opener against the Wake Forest Fungo. The River Bandits swept the Fungo, 12-2 and 15-5. 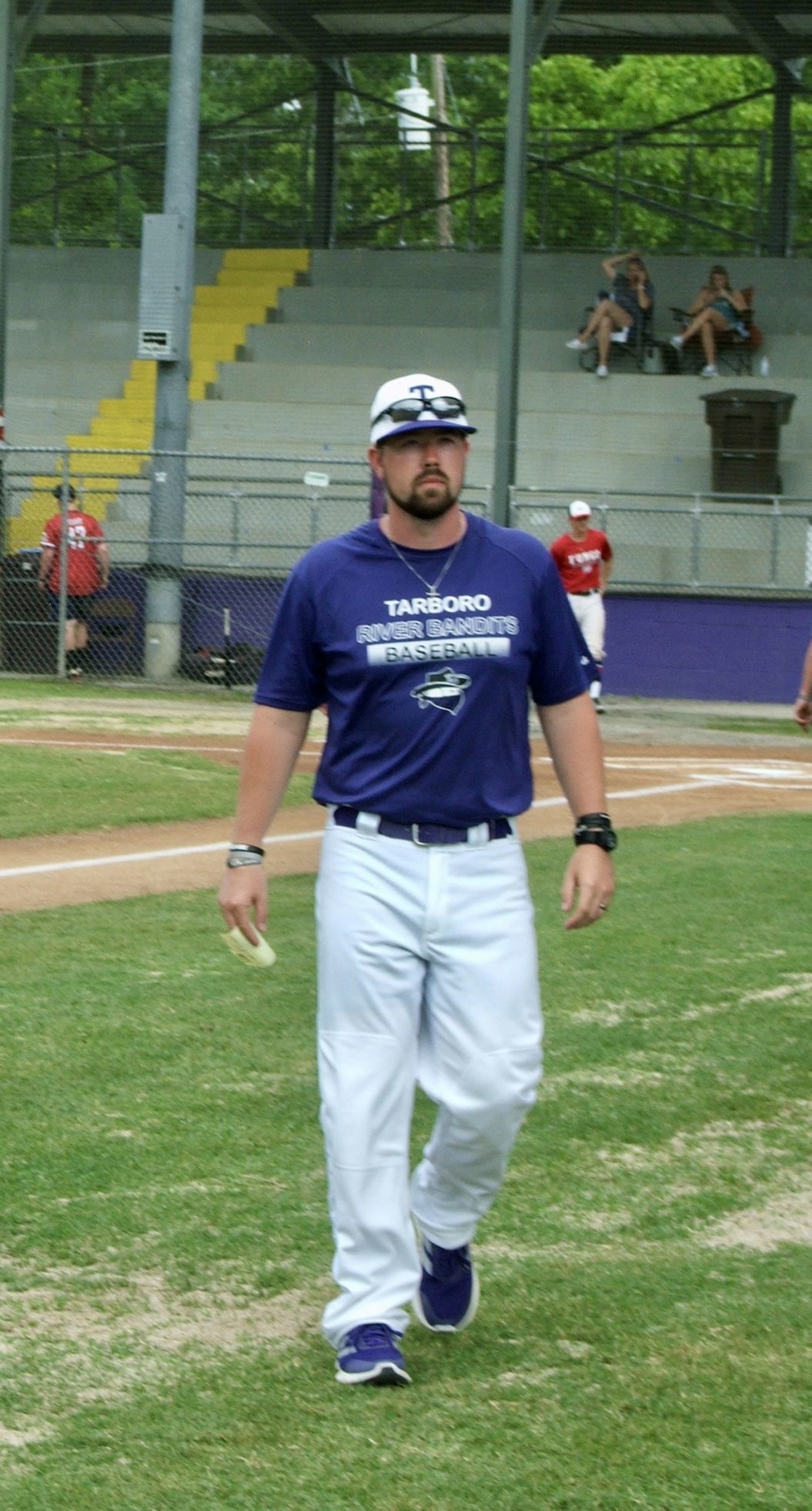 Tarboro River Bandits Head Coach Brandon Matthews walks back to the dugout after the pregame meetings with the umpires before Wednesday's home opener. 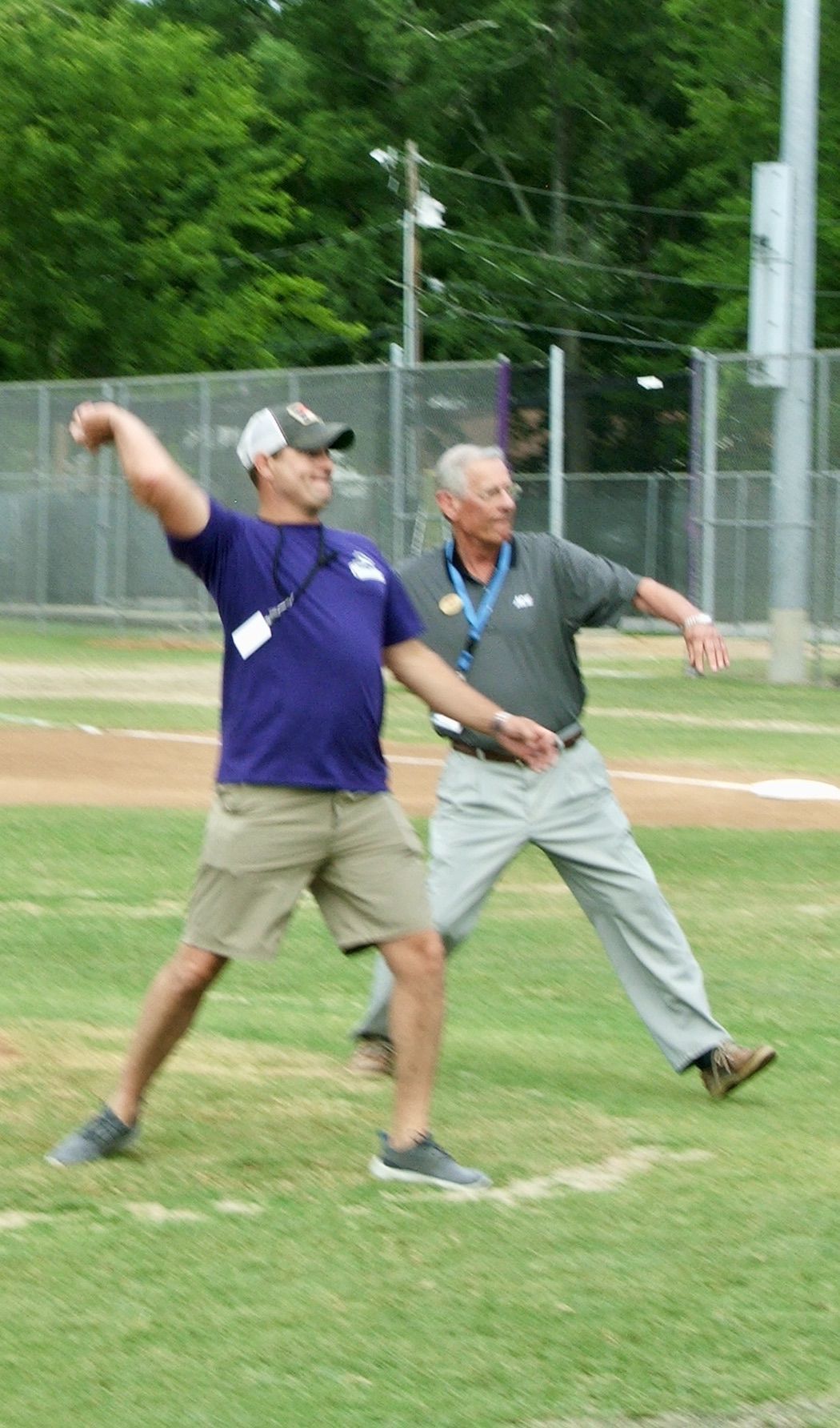 The Tarboro River Bandits line up down the third base line prior to the start of Wednesday’s home opener against the Wake Forest Fungo. The River Bandits swept the Fungo, 12-2 and 15-5.

Tarboro River Bandits Head Coach Brandon Matthews walks back to the dugout after the pregame meetings with the umpires before Wednesday's home opener.

The Tarboro River Bandits got strong pitching, solid fielding and were aggressive at the plate as they won their home opener Wednesday night against the Wake Forest Fungo in a pair of 10-run rule games, 12-2 an 15-5.

“Like I told the guys, I have no criticisms of the way they played ball tonight,” Coach Brandon Matthews said. “Our pitchers just carry the load until it’s time to hand off to the next guy and they do the same. Our batters were aggressive and swung the bat extremely well.”

With the sweep, Tarboro improves to 4-0 heading into a big weekend series against the Fuquay-Varina Twins. The Bandits and Twins will play back-to-back doubleheaders Saturday and Sunday in a pair of 5 p.m. starts.

In the first game, Thomas Fox (Paul Camp C.C.) got the Bandits going in the first as he reached first on a walk, advanced to second on a passed ball, and scored when Phillip Boykin (North Pitt/Norfolk State) doubled to center.

The Bandits added a run in the third when Jarod Bingaman tripled into the deep right outfield corner, then scored on a sacrifice fly to left by Fox.

Then, in the fourth, the Bandits played long ball with the Fungo pitchers as first Caleb Fluno (Lenoir-Rhyne) and then Gage Riddick (Eastern Mennonite) hit two-run homers, each to left-center field, Fluno drove in Jake Brown (Pfieffer), who had walked, while Riddick plated Rufus Hurdle (Paul Camp), who reached on a fielding error by the third baseman.

Wake took advantage of an error and back-to-back singles in the fifth to close the gap to 6-2, but the Bandits put the game away in the sixth with six runs off of a single, a trio of doubles, a stolen base, a sacrifice fly, and six walks. At one point, a pair of Wake Forest pitchers threw 10 straight balls.

Riddick, Fox, Boykin, and Patrick Rogan (Camp) all had hits in the inning.

On the mound, Tripp Barfield (NC State) got the start and pitched four innings of no-hit ball, striking out three and walking nine. Barfield got Fungo batters to hit into seven ground outs.

He was relieved by Taite Hensley (Centralia), who gave up two runs after a throwing error by Bingaman at short kept the Fungo alive long enough to get a pair of unearned runs.

A stellar defensive play in center field by Boykin helped kept the Fungo from scoring more runs when he snagged a deep fly, then fired a shot to Brown at the plate to keep the runner at third from tagging.

In game two, Tarboro Tok a 1-0 lead in the bottom of the first when Zack Whitacre (Potomac State) led off with a walk, stole second, and came around to score when Riddick hit a looping single to left.

The Bandits added to that lead in the second, as nine batters went to the plate and five scored — including four when Whitacre hit a grand slam to left to open a 6-0 lead after two innings.

A walk to Grant Jarman (J.H. Rose/UNCG) plated Cutler before Whitacre’s drive cleared the bases and opened a 6-0 lead.

Wake Forest chipped away at the lead, scoring three in the third and one each in the fourth and fifth innings to close to within one, at 6-5 after five.

It was in the fifth that the Fungo had scored a run and had the bases loaded with one out when Cale Bolton (Brunswick CC) shut them down and ended the threat. Bolton retired the Fungo 1-2-3 in the sixth.

In Tarboro’s half of the sixth, 10 batters went to the plate and really began to play long ball.

Whitacre opened with a double to the wall in right-center, took third on a passed ball, and scored on a wild pitch.

Matthew Mangum (Glenville State) walked and went to second on the run-scoring wild pitch, then moved to third on Boykin’s single to right. Riddick and Kasey Caras (Messiah) both walked before Rogan cleared the bases with a three-run double off the left-centerfield wall

Brow followed Rogan with another double off the wall and Hurdle followed with a walk before Bingaman hit a three-run shot to left to end the game.

Trey Jernigan (North Pitt/UNC-Asheville), who played youth baseball in Tarboro before heading to North Pitt, got the start in game two and pitched two innings, allowing a looping single to open the game and striking out one. He recorded five ground outs.

Until the state moves into Stage 3 of the COVID-19 recovery plan, attendance at games is limited to player families and host families. Tickets are $8 for adults and $5 for children six and older.

Games are being live-streamed on Facebook so that distant families and fans of players can watch, as can local and area fans.

“I think this is gonna be a tremendous home-field advantage for us when the fans can come out,” Matthews said after the sweep.