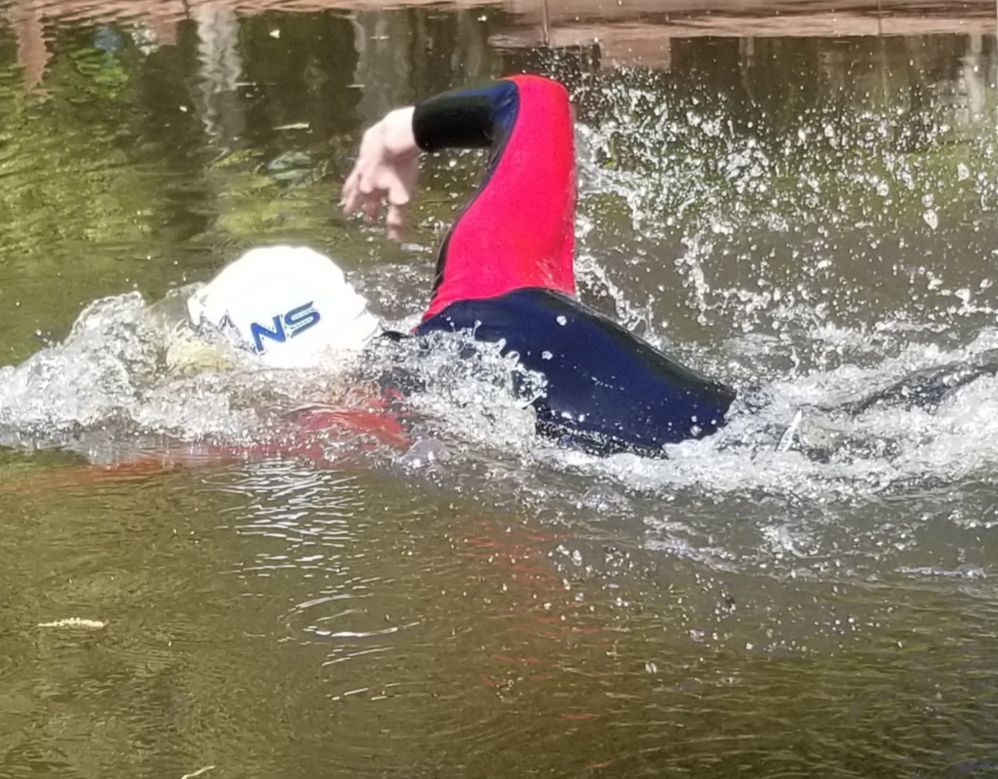 Nash Central student Lance Norris swims in the Tar River Reservoir. Norris, who was close to a trio of U.S. Olympic Trials cuts, has been swimming there since March while pools and aquatic centers have been closed due to the ongoing pandemic. 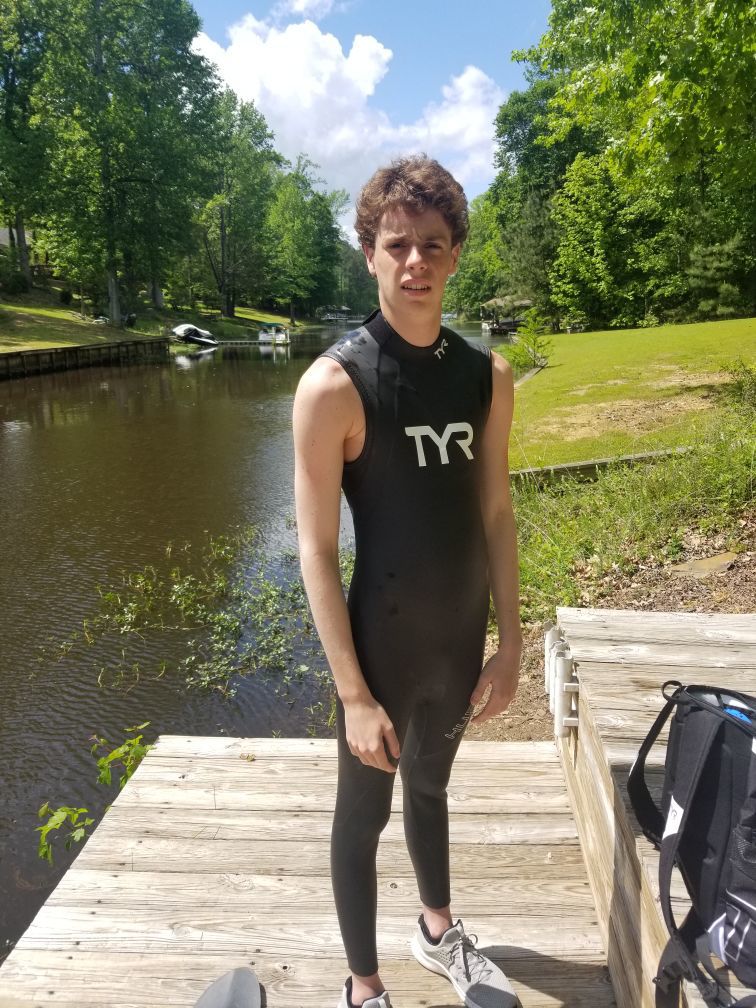 Nash Central student Lance Norris stands on a dock near an access point to the Tar River Reservoir. Norris, who was close to a trio of U.S. Olympic Trials cuts, has been swimming there since March while pools and aquatic centers have been closed due to the ongoing pandemic.

Nash Central student Lance Norris swims in the Tar River Reservoir. Norris, who was close to a trio of U.S. Olympic Trials cuts, has been swimming there since March while pools and aquatic centers have been closed due to the ongoing pandemic.

Nash Central student Lance Norris stands on a dock near an access point to the Tar River Reservoir. Norris, who was close to a trio of U.S. Olympic Trials cuts, has been swimming there since March while pools and aquatic centers have been closed due to the ongoing pandemic.

Ask Lance Norris to remember the last time he took a break from swimming and the answer is difficult. He doesn’t know.

The 16-year-old Nash Central student began swimming laps at the Rocky Mount YMCA at age 5, and was competing in meets by age 8. Norris hasn’t stopped swimming since, finding time to put in thousands of yards each day.

Lengthy time away from the pool is rare. When an illness in February forced Norris to miss the high school state meet, he worried about how his training would be affected. He was back in the pool the next week.

“I always say he’s addicted to being in the water,” Norris’ father Ron said. “And when he doesn’t get in he gets, like, withdrawal symptoms. It just throws him off. It’s how he’s always been. When he’s not in water it feels like his whole day is off.”

When the COVID-19 pandemic response shuttered workout facilities and aquatic centers in March, Norris didn’t have a choice but to step away from training.

Important championship meets dot the spring and summer swimming schedule, including several opportunities to qualify for international competitions in the summer, like the Olympics, where Norris was on his way to securing time cuts for the U.S. Olympic Trials meet.

In the weeks after the closures the Olympics announced a new 2021 start date, championship meets were postponed or canceled and Norris’ Triangle Aquatic Center club team stopped holding practices. Norris went from swimming an average of 35,000 yards per week to zero.

Norris, who won a state championship his freshman season with the Bulldogs, didn’t fare well with this sudden stoppage. He needed to swim.

“It was an unwanted break,” Norris said. “I was out of the water for three days before I started swimming in the lake.”

Norris waded into the Tar River reservoir on March 28. Wearing a jammer, he soon found that he would need more than a suit that stops at the knees.

The temperature was in the 80s, but the water hadn’t yet warmed up from the winter weather. Walking any deeper into the water wasn’t an option. Expletives flew from Norris’ mouth as he raced up the boat ramp and back onto land.

“It was so cold I barely made it in,” Norris said of that first day. “I had to buy a wetsuit.”

Norris’ parents bought him a wetsuit which solved the water temperature problem. The dark body-length suit with red sleeves kept him warm enough to spend an hour or more in the cold water.

He’s been going back ever since.

On April 22, Norris logged his 26th consecutive day swimming laps in the reservoir. By the 28th consecutive day, Norris had switched to a new black TYR wetsuit without sleeves which allowed for more mobility. A weekend training session at a lake in Cary snapped his reservoir streak, but Norris swam more than 30 consecutive days in all sorts of weather.

During the chilly days of early spring Norris would swim during the hottest parts of the day, around 3 or 4 p.m. Some days he had to wait out rain or wind. As the days passed his window of warmth grew larger, leading to early afternoon swims and longer yardage.

Norris is never alone in the 1,860 acre reservoir. His dad is always nearby, paddling in a family friend’s kayak alongside his son. Ron and the kayak serve as both a safety precaution and a floating reserve of water bottles and snacks.

“He’s been out there every day with me since I started swimming here,” Norris said. “Even when he has to work he’ll be out here. He won’t admit to me that he likes going out there every single day, but I think he enjoys being in nature. On a nice day it’s really peaceful.”

Ron works the night shift at Nash General Hospital and often finds time to sleep in the morning before launching the kayak in hot pursuit of Norris’ windmilling arms.

“I think I went 26 days straight until he went to Jordan Lake in Apex one weekend,” Ron said. “It was: sleep four hours when I get back from work, then go out with him and row. He’s dedicated.”

Norris said that a tough weekend workout on the lake could include more than 10,000 yards broken across two sessions. Other times he’ll swim anywhere from 5,000-7,000 yards. And he’s learned that open water yardage is tougher than pool yardage.

“I thought I’d be fine but I didn’t check the gusts,” he said. “And it was like 45. Going out was fine because the wind was at my back, but on the way back it was the worst feeling. I couldn't get a stroke in without waves pummeling my face. When I’d look at my dad on the kayak you could see it bobbing up and down.”

Norris took the swimming world by storm when he entered his teenage years. At age 14, while attending Nash Central Middle School, Norris laid claim to the fastest 1,000-yard swim nationally in his age group. As a high school freshman on the Nash Central team, Norris won the 1A/2A state title in the 200-yard freestyle and placed second in the 500.

An illness ended the potential for two individual state titles at this year's state meet, but that didn’t stop him from setting records just a few weeks later with his TAC club team at the 2020 Cary Sectionals on March 5.

Earlier this year, USA Swimming named Norris among the world’s top 100 swimmers under the age of 18 in two events. SwimSwam listed Norris as No. 14 among the top college swimming prospects in the class of 2022 — Cotter and Haughey are listed as No. 17 and No. 18, respectively.

This was supposed to be an important summer for Norris as he had his sights on swimming at the U.S. Olympic Trials. His strengths in the distance events and the individual medley — where all four strokes are used — earned him a real shot at having a strong showing.

He was 0.7 seconds away from a cut in the 1,500-meter race, which is just a blink in a race that covers 30 lengths of the pool. He was one second off the 400 IM cut, and a little more than one second away from the 200 backstroke cut.

The shift in schedule means he will have more time to mature and grow as the Trials won’t take place for another year. But that also means the time standards will be lowered come 2021, forcing Norris to shave off more time.

But he isn’t worried.

Norris’ work ethic and dedication to open water swimming during the time away from the pool has kept him in shape, and perhaps increased his strength in the water. He hopes his continued training of about 35,000 yards per week will give him an advantage over his peers who have largely been staying fit with dry-land activities.

“I am in better shape than I have been in my life,” Norris said. “Open water swimming really helped me.”

He added that he is pacing for a sub-15:30 in the 1,500, which would be almost 15 seconds faster than his previous best. Norris is also hopeful that he can return to his club team soon where he will once again train in a pool.

For now, a large body of water will have to do.

“It’s all about commitment and he just has this drive,” Ron said. “He’s that rattlesnake where if he doesn’t get in the water he’s a grumpy kid. That’s just the way it is.”