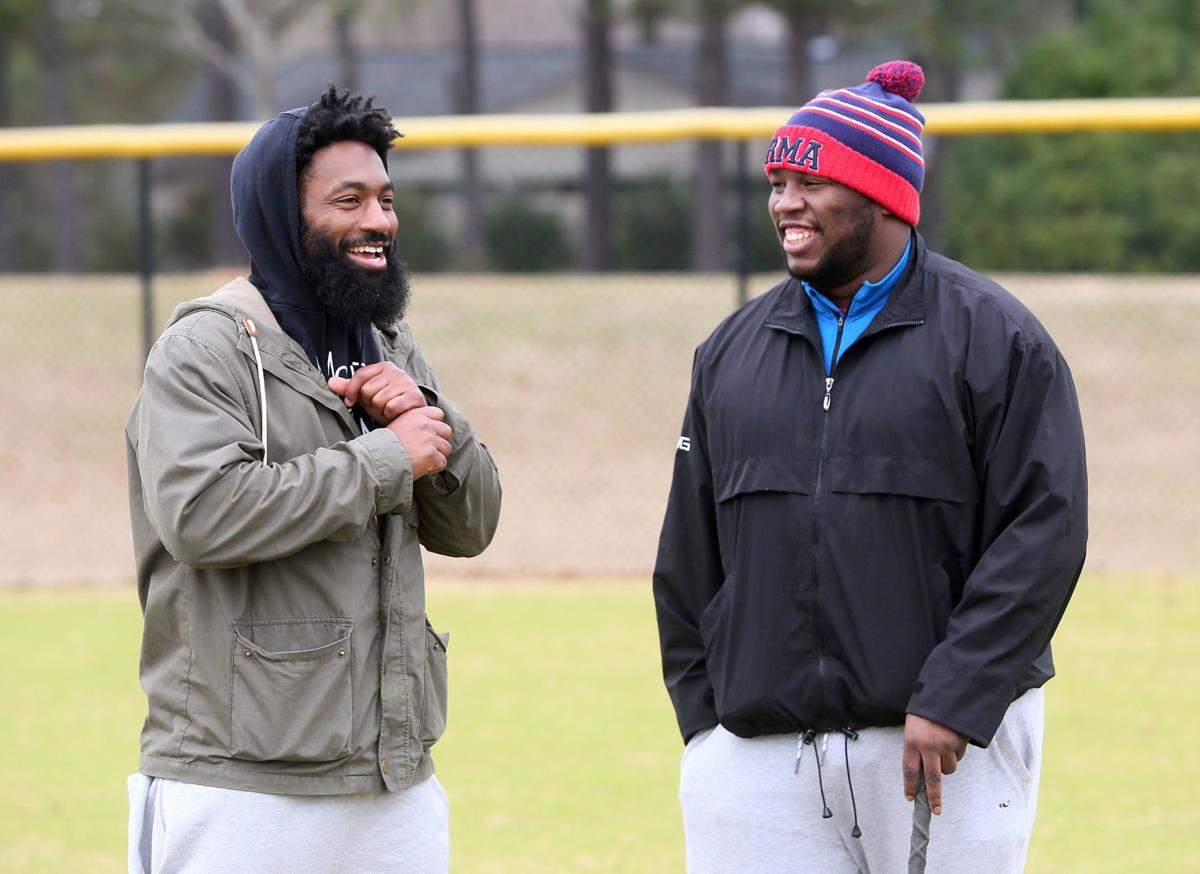 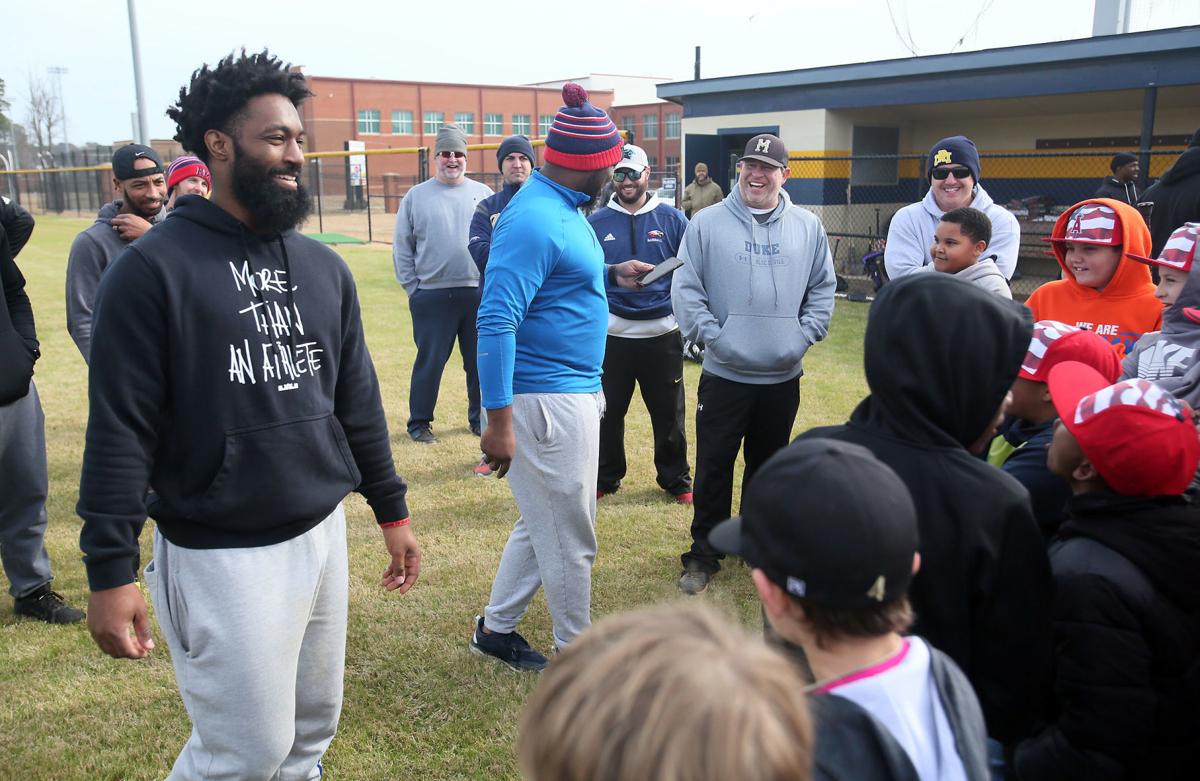 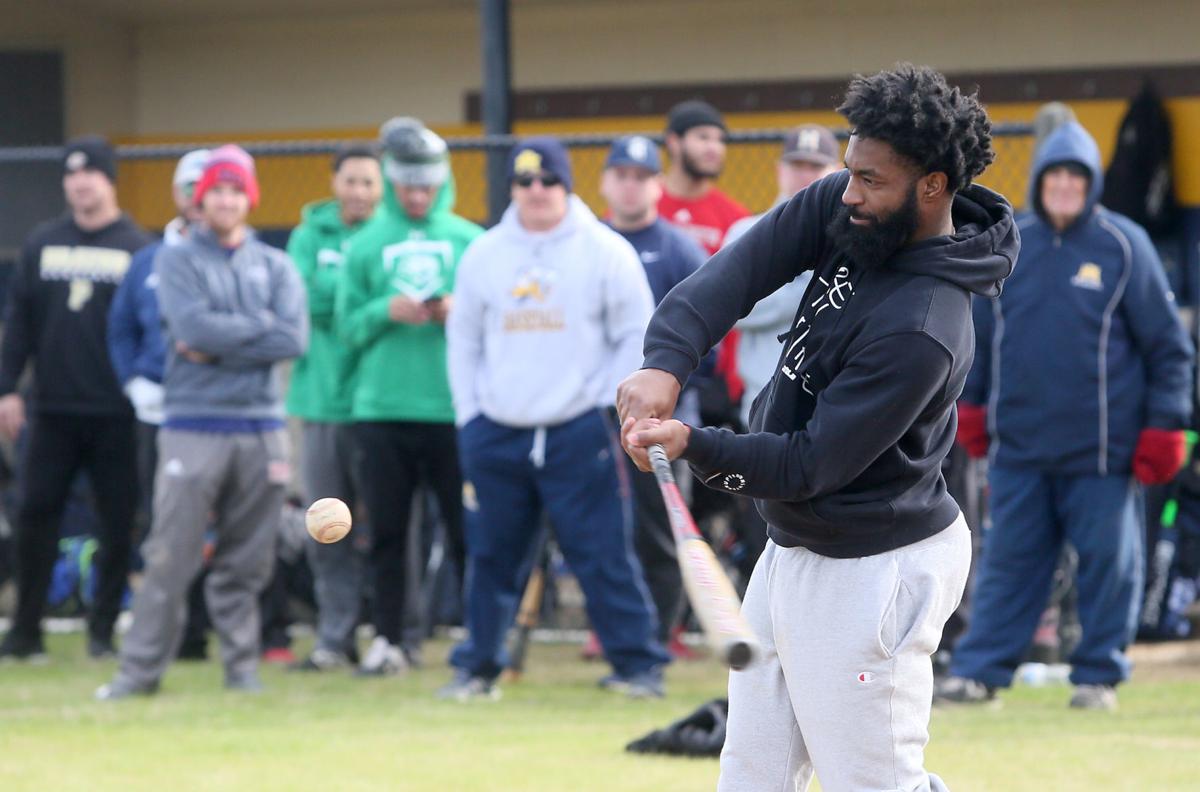 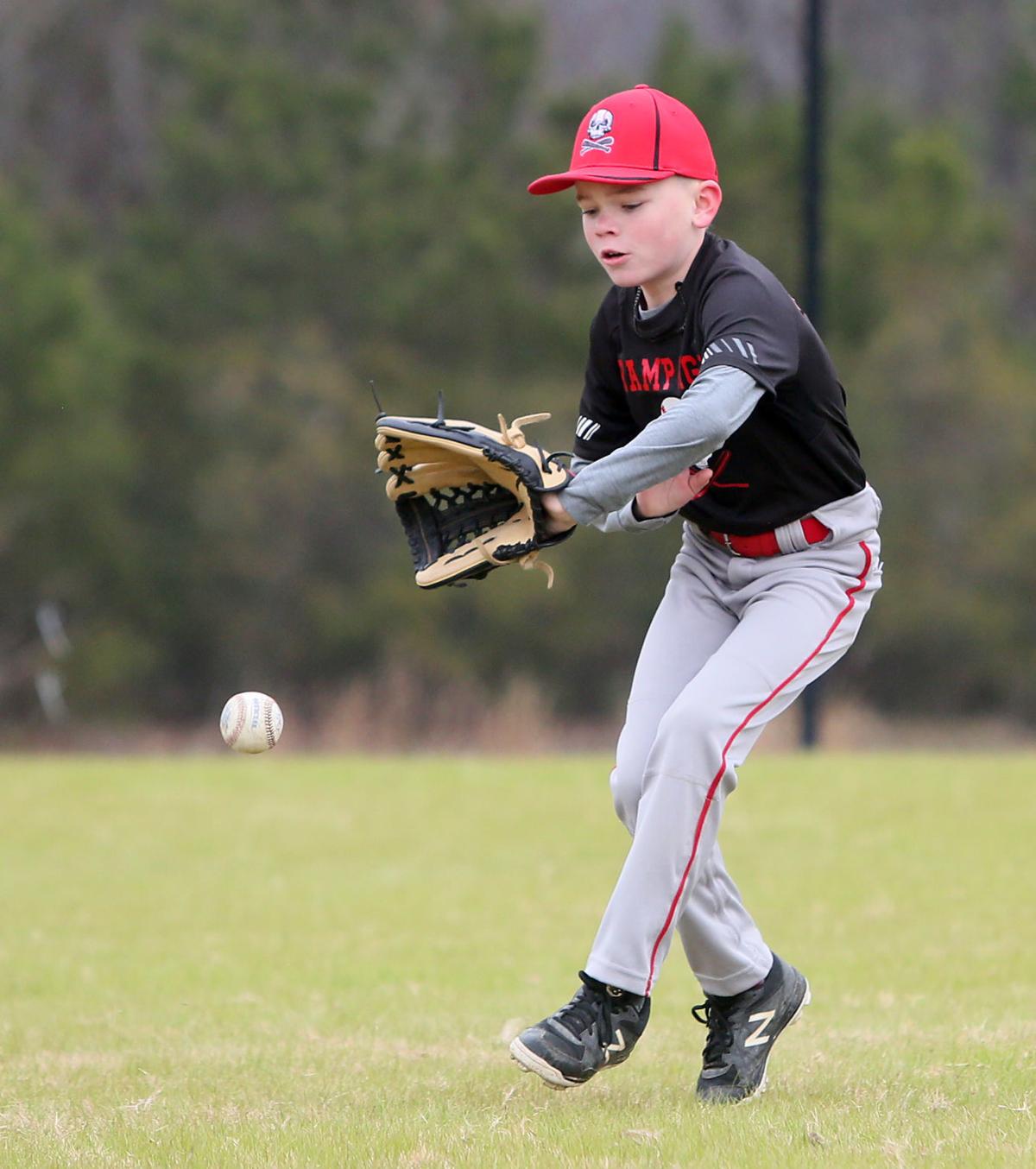 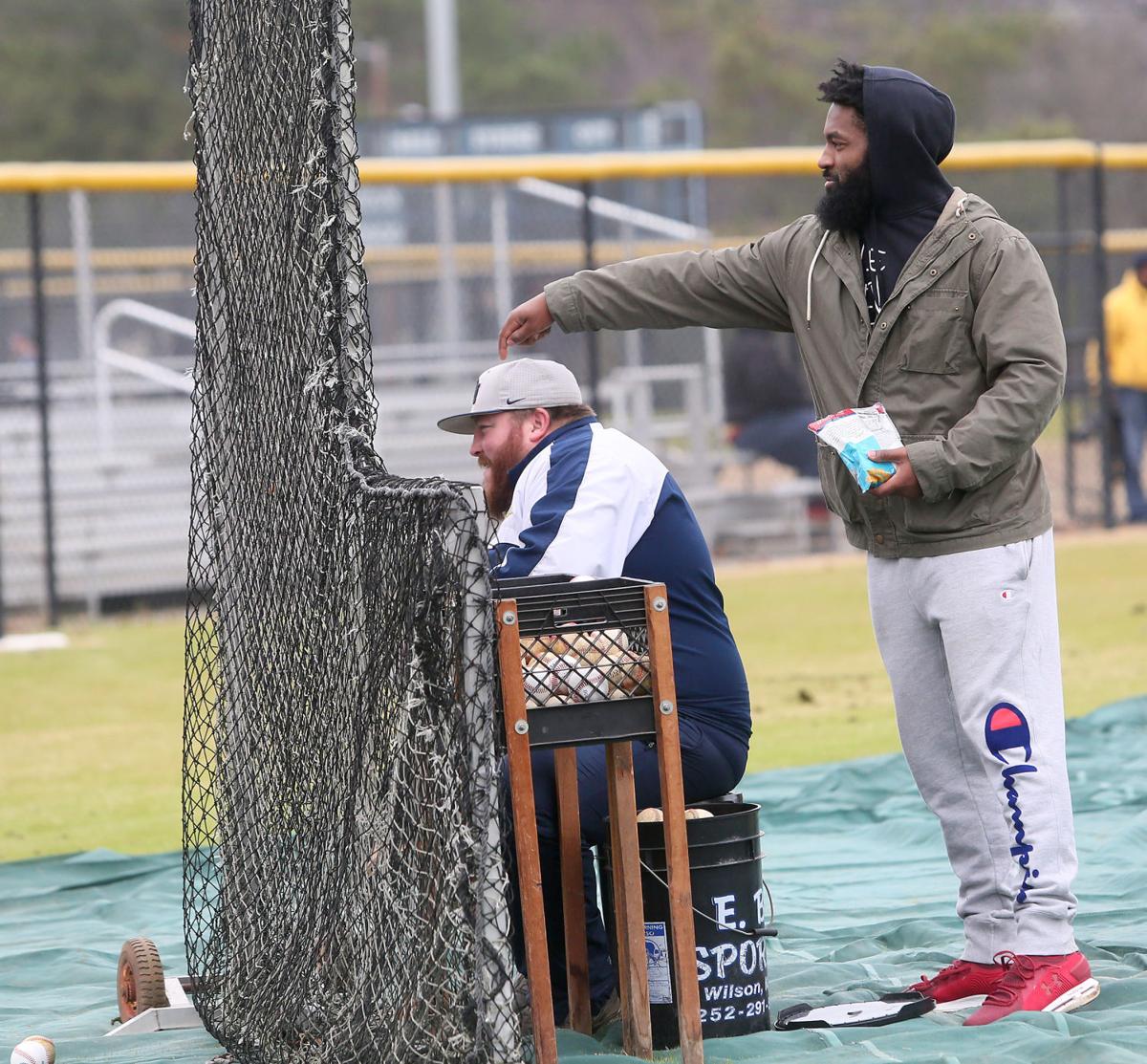 Brian Goodwin pulled off his green jacket and stepped into the left-handed batter’s box to loud cheers.

The kids lined the brick backstop in anticipation of watching their hometown major leaguer hit a few balls around the field. Goodwin obliged.

It was a fitting encore to the three-hour camp held at Rocky Mount High, where kids ages 8 to 14 received instruction from Goodwin and area coaches. Various were set up across the baseball and softball fields where fielding, hitting and baserunning skills were on display.

About 70 kids showed up to the clinic on Saturday, and each left with an Angels hat, a pair of cleats, a drawstring bag and a post-workout meal. Goodwin even signed some items.

“I just feel like there’s a need for getting the kids back into baseball,” said Goodwin, who won a state baseball championship with the Gryphons in 2008. “I think it’s important. The media controls what we see so much and the coverage for basketball and football outweighs baseball so much.

“What I want is for kids to get back to playing baseball. I want them to know that baseball is still a popular sport and it still can take you places.”

Goodwin knows something about the game taking him places. He came up with the Washington Nationals in 2016 where he spent his first two full seasons. He was traded to the Royals in the middle of 2018, and was claimed off waivers by the Angels ahead of the 2019 season.

“I had the East Coast, the Midwest, now the West Coast,” Goodwin said. “So I’ve been a little bit of everywhere. Everywhere is a little different, but L.A. is so laid back. Even down to the fans. Some people get loud and crazy, and we get a little bit of that, but the atmosphere is so different. People are so relaxed.”

Goodwin, too, is relaxed. It’s how he approaches the game. On Saturday, that personality shone through as he wore a big smile and could be seen joking with old teammates and laughing with friends.

He said he tries not to be too serious during games, but also acknowledges that going too far in the other direction isn’t good, either.

“You have to get into the mindset, flip the switch and find a way to get in a zone,” he said. “Sometimes it’s harder than other times. Big crowd, big games and big moments it’s easier to turn it on. Sometimes it’s so laid back, but you need a middle ground of both. It’s a fun game and you have to play it the way you came up playing it.”

He got a chance to play the game with the Angels more than he ever had at his previous two stops. And it was in the Angels outfield where Goodwin finally broke through.

He is coming off his most productive season as a major league player. He had never played in more than 75 games in each of his first three seasons, but saw that number jump to 136 last season with the Angels. He made 101 starts, up from a previous high of 59 with the Nationals in 2007.

Goodwin took advantage of that playing time and turned in career bests in a number of offensive categories, including home runs (17), RBI (47), batting average (.262), stolen bases (6) and doubles (29).

“The opportunity was there,” he said of his 2019 season. “Before, I was waiting my turn and it felt like I was supposed to be out there putting up the numbers but I never had the real chance to do it. That’s what this year felt like — what was supposed to happen, actually had the chance to let it happen. I always knew it was in there, but there’s only so much you can do from the sidelines.”

He figures to be part of the outfield mix moving forward on a team that has spent the offseason solidifying its roster in hopes of making the playoffs for the first time since 2014.

The Angels hired former Cubs manager Joe Maddon to replace Brad Ausmus, and made a big splash by signing third baseman Anthony Rendon who is fresh off guiding the Nationals to a World Series title over L.A.’s AL West division rival Houston Astros.

Rendon led the National league in doubles and RBI, and .319. Also, Shohei Ohtani, the two-way player from Japan, will continue to be a fixture in the middle of the order, while also resuming his pitching duties coming off elbow surgery.

When asked about the offensive upgrades, and potentially new playing-time competition, Goodwin sees it as part of an aggressive offseason that hopefully leads to a postseason berth.

“I’m just having a good time,” he said. “We try to keep that intensity and compete every night, and we’re trying to make it to the playoffs. It’s looking like a good year, good offseason, lot of power bats.”

Goodwin, who will play under a 1-year, $2.1 million contract in 2020, is expected to compete for a starting outfield position, likely in right field. Justin Upton will start in left field as long as he’s healthy, while Mike Trout, who is coming off his third MVP award, will start in center.

Playing alongside Trout, who is among the top players in baseball, Goodwin said he has grown accustomed to the larger-than-life aura that follows Trout.

“I guess it’s different when you’re in the club house with him every day,” Goodwin said. “I looked at him a lot different before I played with him. Just hearing about him, he’s always in the highlights, always in the news, and people go crazy for everything he does, and to witness it up close on a nightly basis is something.

“At the end of the day, we go home and put on our pants the same way, so you really don’t think about it in the moment but when you look back on it and take a step back, people remind me that these are big-time dudes that I’m playing with, so sometimes it’s a little surreal.”