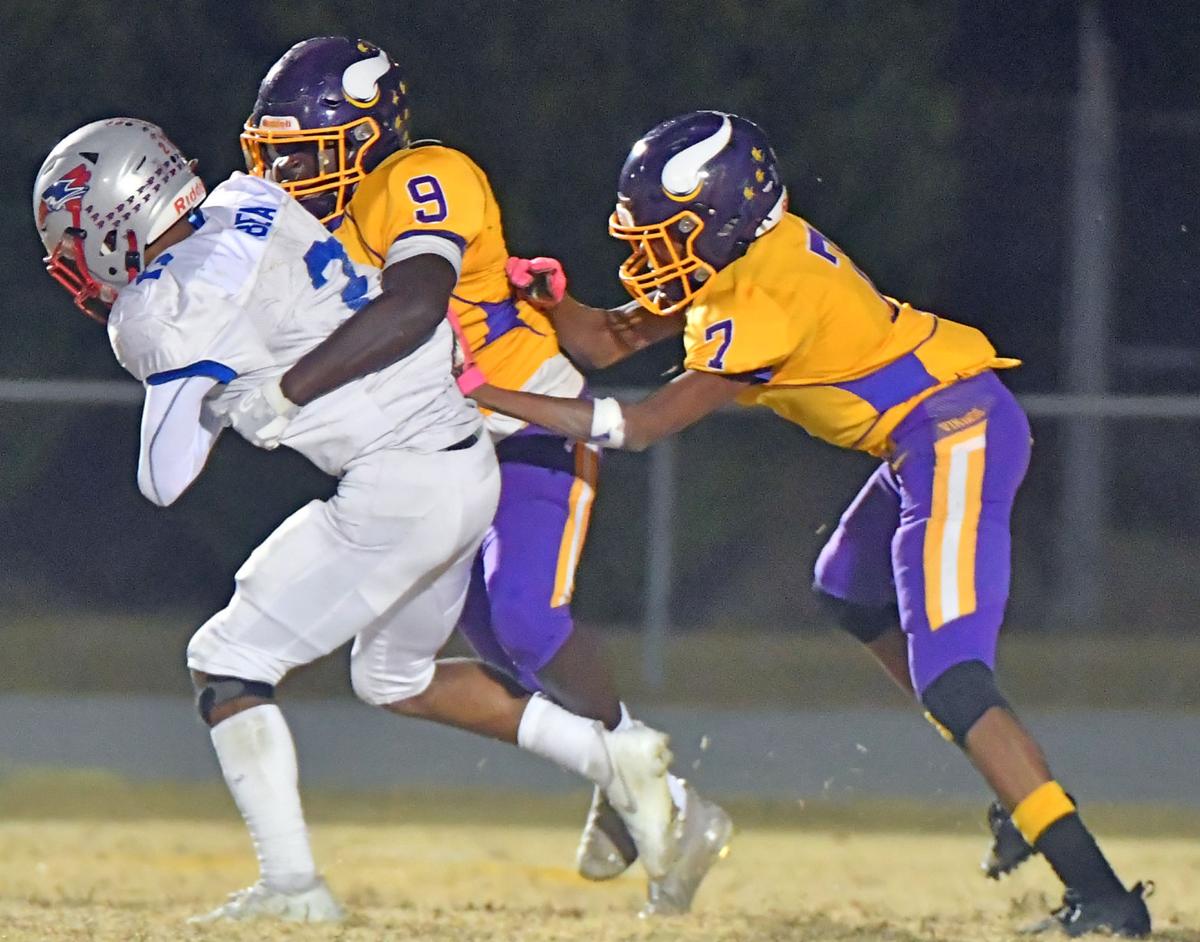 Tarboro defender Amari Battle wraps up Pender quarterback Antonio Bea as Jayshun Higgs (7) closes in during the Vikings’ 22-12 victory in the Eastern Class 1A finals Friday night in Tarboro. 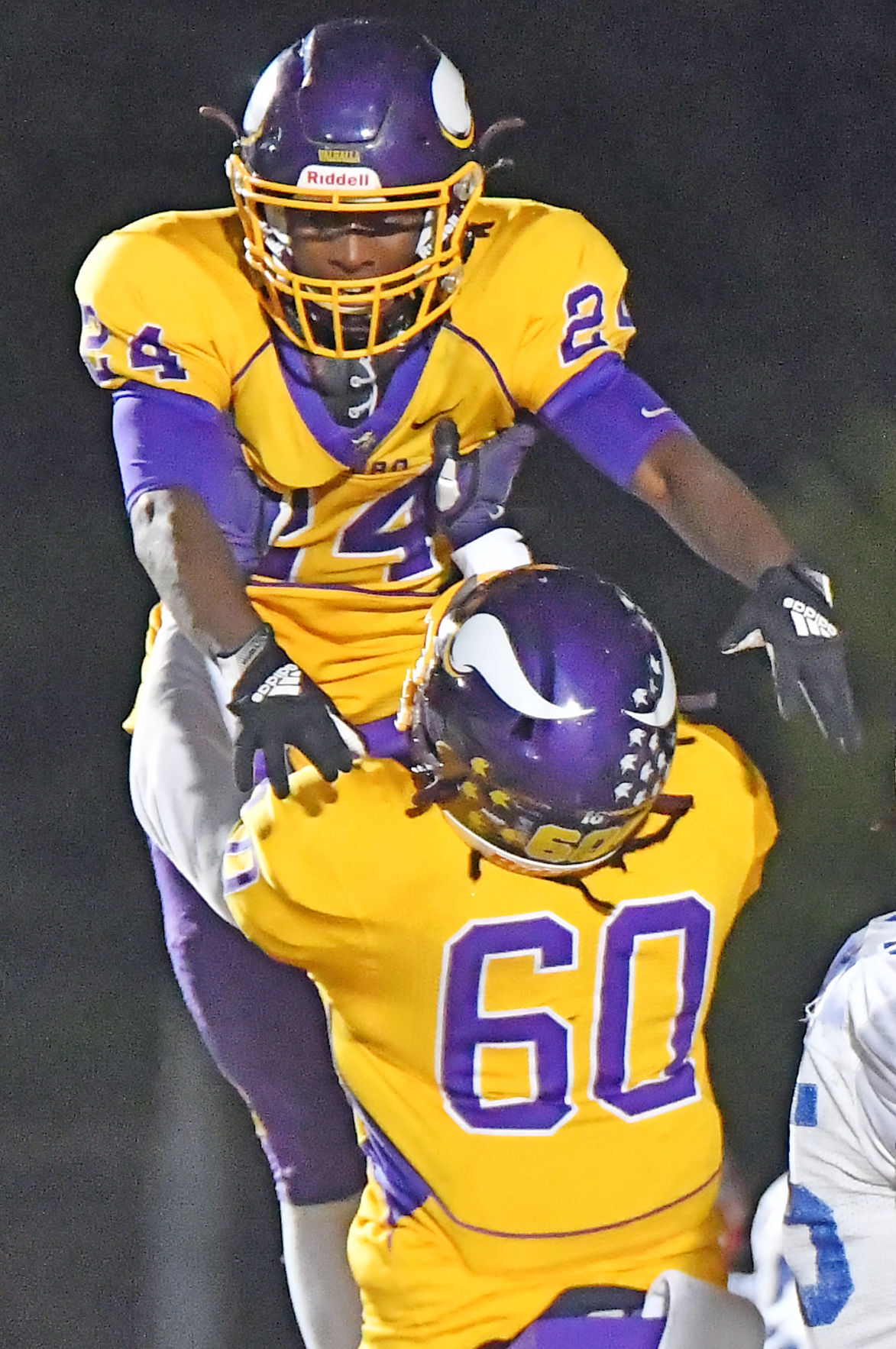 Tarboro running back Tobias Joyner gets a lift from offensive lineman Jaquan Cotten (60) after scoring the clinching touchdown Friday. 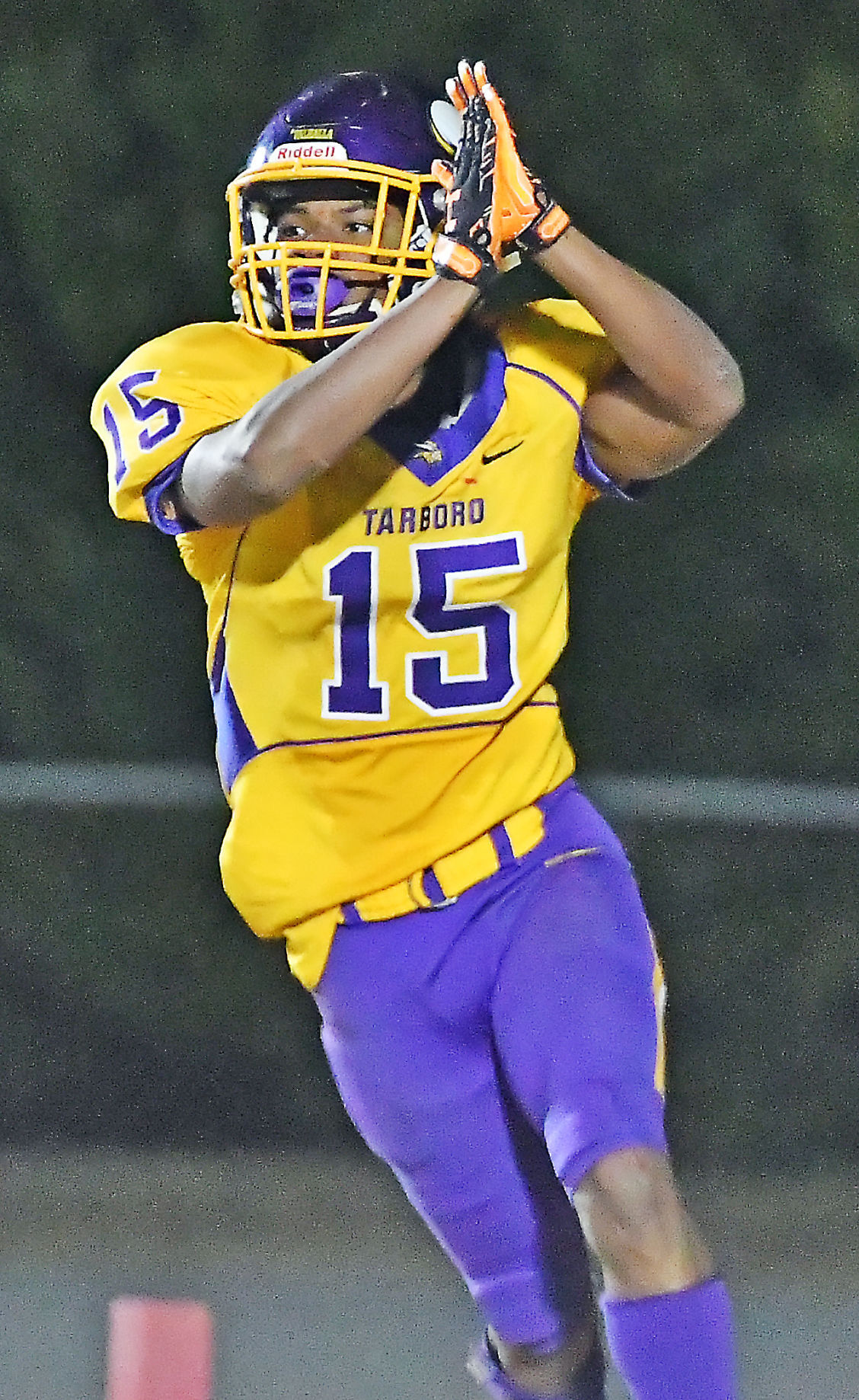 Tarboro linebacker Jamarion Dozier signls the safety that put the Vikings ahead for good during Friday's Eastern 1A Regional finals game against Pender.

Tarboro defender Amari Battle wraps up Pender quarterback Antonio Bea as Jayshun Higgs (7) closes in during the Vikings’ 22-12 victory in the Eastern Class 1A finals Friday night in Tarboro.

Tarboro running back Tobias Joyner gets a lift from offensive lineman Jaquan Cotten (60) after scoring the clinching touchdown Friday.

Tarboro linebacker Jamarion Dozier signls the safety that put the Vikings ahead for good during Friday's Eastern 1A Regional finals game against Pender.

The Tarboro High School football team is returning to the state championship game for the fifth straight season.

The Vikings used a late safety followed by a touchdown in the fourth quarter to thwart Pender 22-12 in the Class 1A East Regional Finals at home Friday night.

Tarboro, the No. 1 seed in the East, improved to 13-1 with its 13th consecutive victory. It will oppose Mitchell, the No. 3 seed out of the West, in the Class 1A state championship game at noon on Dec. 11 at Kenan Stadium in Chapel Hill.

The Vikings were driving toward a potential go-ahead touchdown to start the fourth quarter with the score tied at 12.

A defensive holding penalty on Pender gave Tarboro a first down at the Patriots’ 21-yard line. The drive stalled, and on fourth down from the 15, Pender defensive back Brandon Williams picked off a pass intended for Tobias Joyner at the 1-yard line with 5:28 left in the game.

“Pender had a great season and came in here and played a great game,” Tarboro coach Jeff Craddock said. “At the end of the day, when it was 12-12, our defense got the big safety and the offense finished it off at the end, so that says we are a resilient group here at Tarboro. “Everyone has said we may not be as good this year as we’ve been in the past, and that may be true, but these kids found a way to win the game tonight.”

With the game hanging in the balance, the Viking defense stopped quarterback Antonio Bea three straight times, with the last one a huge tackle made by Joshua Bradley in the end zone for a safety. That put Tarboro ahead 14-12 with 4:04 left.

Pender had to kick from its own 20 following the safety, and Melvin Sherrod recovered for the Vikings at the Patriots’ 31. However, a late hit penalty on the Patriots moved the ball to the 16.

Runs from Ni’Zavion Black and Joyner got Tarboro to the 10. After a one-yard loss, on fourth and goal, Joyner scored from 11 yards with 58.7 seconds remaining to put the Vikings ahead by eight (20-12).

When a pair of offsides penalties moved the ball to the 1, Tarboro opted for a two-point conversion attempt instead of kicking the extra point, and Omarion Lewis pushed his way in to make it a 10-point advantage and essentially end Pender’s season at 9-4 overall.

Two teams with ball control offenses (the vaunted ‘Tarboro T’ against Pender’s triple option attack) battled it out on the gridiron to see who would represent the East in the 1A finals.

Tarboro had the ball for just six plays in the first quarter to 17 for Pender.

The Vikings turned the ball over on a fumbled punt as Pender’s Jassiah Hill recovered at midfield to start the game. The Patriots then covered the distance in 16 plays, as Kelvin Robinson went in from the 1 with 1:05 left in the quarter. The two-point conversion failed, leaving the visitors up 6-0.

Tarboro tied it at 6-all with a 74-yard drive in nine plays, with the capper being a six-yard pass from Omarion Lewis to Joyner. The extra point was unsuccessful with 9:04 remaining in the first half.

Pender was forced to punt on its next possession, and the Vikings drove 78 yards in eight plays using its ‘Green’ (hurry-up) offense. Tremaine McDaniels broke tackles for a 14-yard TD run, leaving Tarboro ahead 12-6 after the conversion failed.

The Patriots received the second-half kickoff and drove 59 yards in six plays. A 22-yard run from Christian Hayes tied the score at 12. The conversion was thwarted by Tarboro’s Amari Battle with 9:29 left in the third quarter.

After an exchange of punts, the Vikings then marched 70 yards in 18 plays and chewed up nearly 10 minutes off the clock before Williams’ interception.

But Bradley broke through and swallowed up Antonio Bea on Pender’s third play following the turnover, and the safety put Tarboro ahead for good.

Joyner led the way for the Vikings with 71 yards on 17 carries while Black added 59 on 14 attempts.

Tarboro will be going for its fourth state championship in the past five seasons. The Vikings won the Class 1-AA title in the pandemic-shortened spring season by beating East Surry 25-7. They also won championships in 2017 and 2018 in this current five-year run.