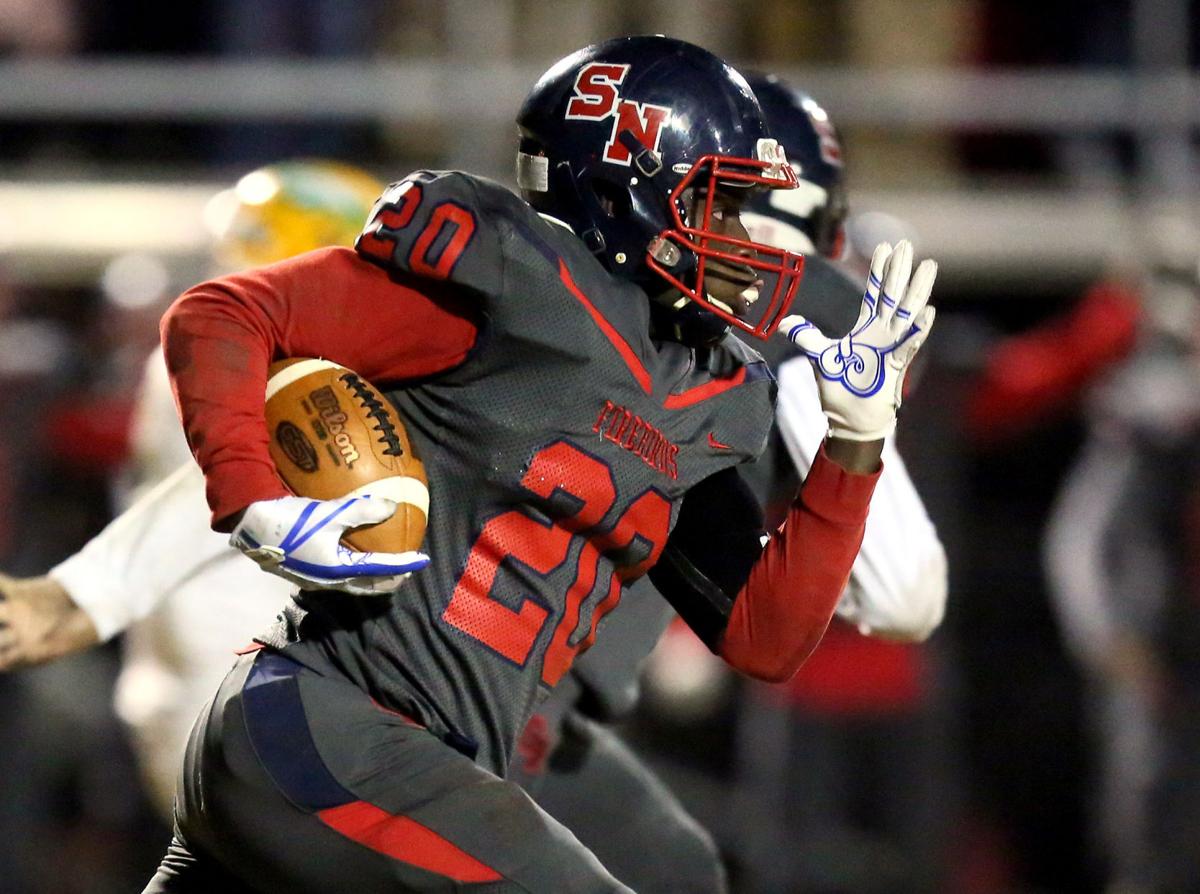 Southern Nash's Quinton Cooley runs for a touchdown Friday during the second round NCHSAA 3-A state playoffs game against Eastern Alamance at Southern Nash High School. 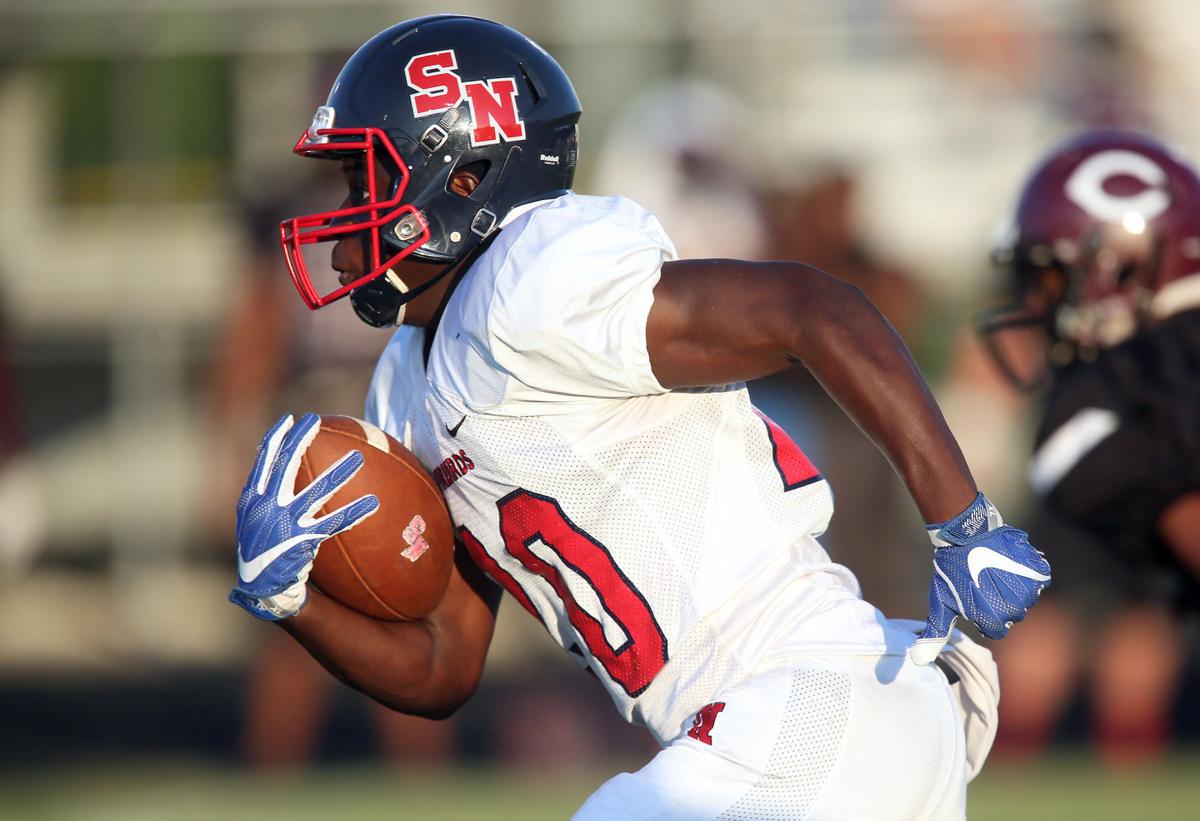 Southern Nash's Quinton Cooley runs for a touchdown Friday during the second round NCHSAA 3-A state playoffs game against Eastern Alamance at Southern Nash High School.

Zach Baker didn’t play a snap of football until his sophomore year at Southern Nash.

Baker, now a senior offensive tackle, said he has always been a big kid and people would urge him to play football. He liked the team component of the game so he agreed. Baker spent his first season on the JV squad, then started at offensive guard during a record-setting season for the offense a year ago.

Baker, at 6-foot-2, 300 pounds, was a key cog in an offensive line that paved the way for 4,850 total rushing yards and 72 touchdowns. But Baker still finds himself wondering if the offense could have found a way to do more at the end of the season.

“When you have a dude rush for 400 yards and lose, it’s nice but it makes you think you could do better somewhere,” Baker said, referring to running back Quinton Cooley’s 413 rushing yards in that game. “We had two of the best running backs in the state last year and we weren't as good as we could have been.”

The remedy? For Baker, it seems to be a cruel form of self torture in the form of watching that loss on film at least once a week since the end of last season.

It was an especially painful loss that never seemed possible until the end. The Firebirds held a 35-28 lead at halftime, which expanded to its largest margin at 56-35 with 6:11 minutes remaining in the game.

Many Southern Nash fans might want to escape the memories of Eastern Alamance scoring the next 22 points, including a game-clinching two-point conversion, yet this is where Baker pays the most attention.

“I always think about it and think, ‘What if?’” Baker said. “Offensively, I don’t know if we could have done anything more but this is a whole team thing. We didn’t score on those two drives and if we get points on just one could have won the game.

“I go back and watch it at least every week and it makes me really mad when I watch it. It keeps that motivation alive. I’ll watch it before Friday’s game, too.”

Southern Nash returns plenty of players who went through that loss, including quarterback Matt Foster and running back Quinton Cooley. Fullback Daylon Whitley, who added seven touchdowns and 338 yards, will also return for his senior year, while sophomore running back and defensive back Jackson Vick will get a more prominent role running the ball.

Cooley, a senior, will be the feature running back this season, and if the way he ended last season is any indication of future success then the Firebirds won’t have too many problems moving the ball on the ground.

Cooley was the main source of offense during that playoff loss. He turned 38 carries into a Southern Nash single-game record of 413 rushing yards and four touchdowns. The performance was part of Cooley’s breakout season, despite sharing the bulk of carries with current N.C. State running back Zonovan Knight.

Cooley was named the Telegram’s 2018 offensive player of the year after scoring a team-high 30 rushing touchdowns to go with 1,756 rushing yards.

“This year, it’ll be fun because everybody is saying now that Bam (Knight) is gone what’s going to happen?” linebacker Jason Bland said. “We’re hoping we'll be good, and with Bam gone we know that our work is really going to show now.”

Knight finished his four-year stint in the Firebirds backfield by claiming the career rushing record at the school. He gained at least 100 rushing yards in each game last season except for an injury-shortened playoff game, and routinely put games out of reach early with his quick-score ability.

Despite the loss of Knight, the Firebirds return many key pieces from an offense that scored an average of 58 points per game. The defensive side of the ball didn’t get so lucky.

Southern Nash graduated its top four tacklers from last season, and the secondary took a hit as well.

Defensive back Darius Edmundson, who gained a flash of internet fame when video of an acrobatic interception and return was picked up by Bleacher Report, is now on the Louisburg College roster. Edmundson collected a team-high six interceptions and seven pass breakups, as the Telegram’s basketball player of the year brought an athleticism to the secondary that will be difficult to replace.

Bland, a senior who will be playing closer to the line of scrimmage, will help to fill the tackles void as the former safety will play outside linebacker this season. Bland was one of two non-seniors — along with then-freshman Jackson Vick — to record an interception last season.

Bland and Vick are also the top two returning tacklers, and will be counted on to guide a younger group.

“It’s easier because safety,” Bland said of his new position. “I feel like I'm better at tackling and at outside linebacker that’s what you do. It’s just, see ball and go. The thing is that safety is more mental. You have a lot of jobs that at outside linebacker you don’t have to worry about like calling this play or making sure this thing happens. You just go out and do your job.”

Southern Nash opens the season with three consecutive home games. Week 1 begins on Friday when its hosts Warren County, then welcomes Nash Central and Bunn before playing at South Granville on Sept. 13.

Fast fact: Southern Nash has won at least nine games in every season since 2012. What’s more, the Firebirds are one of the true locks in the area to be counted on to turn in winning seasons. The last season to end with a losing record was a 4-6 mark in 2008. Southern Nash hasn’t lost more than four games in a single season since then.