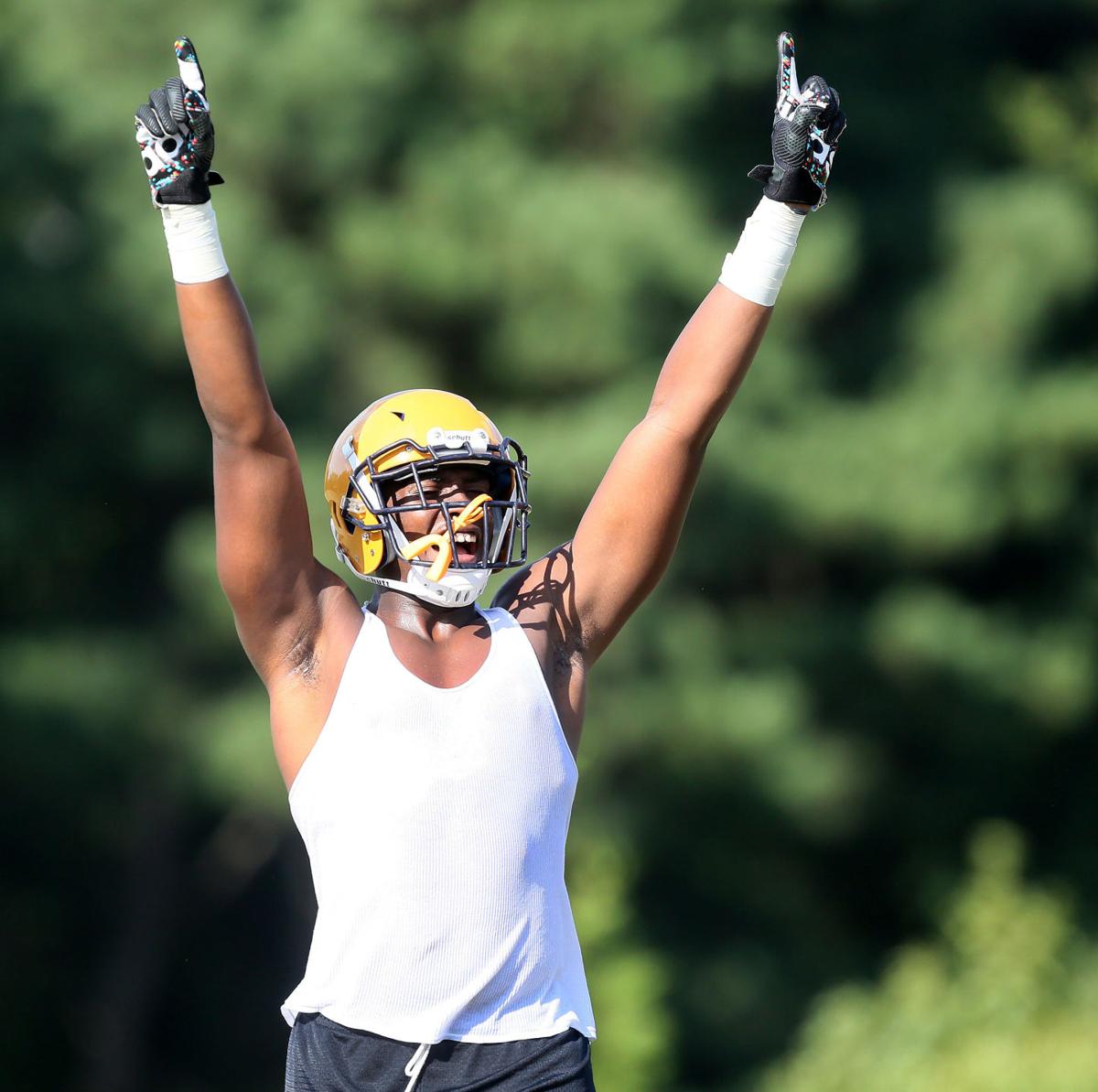 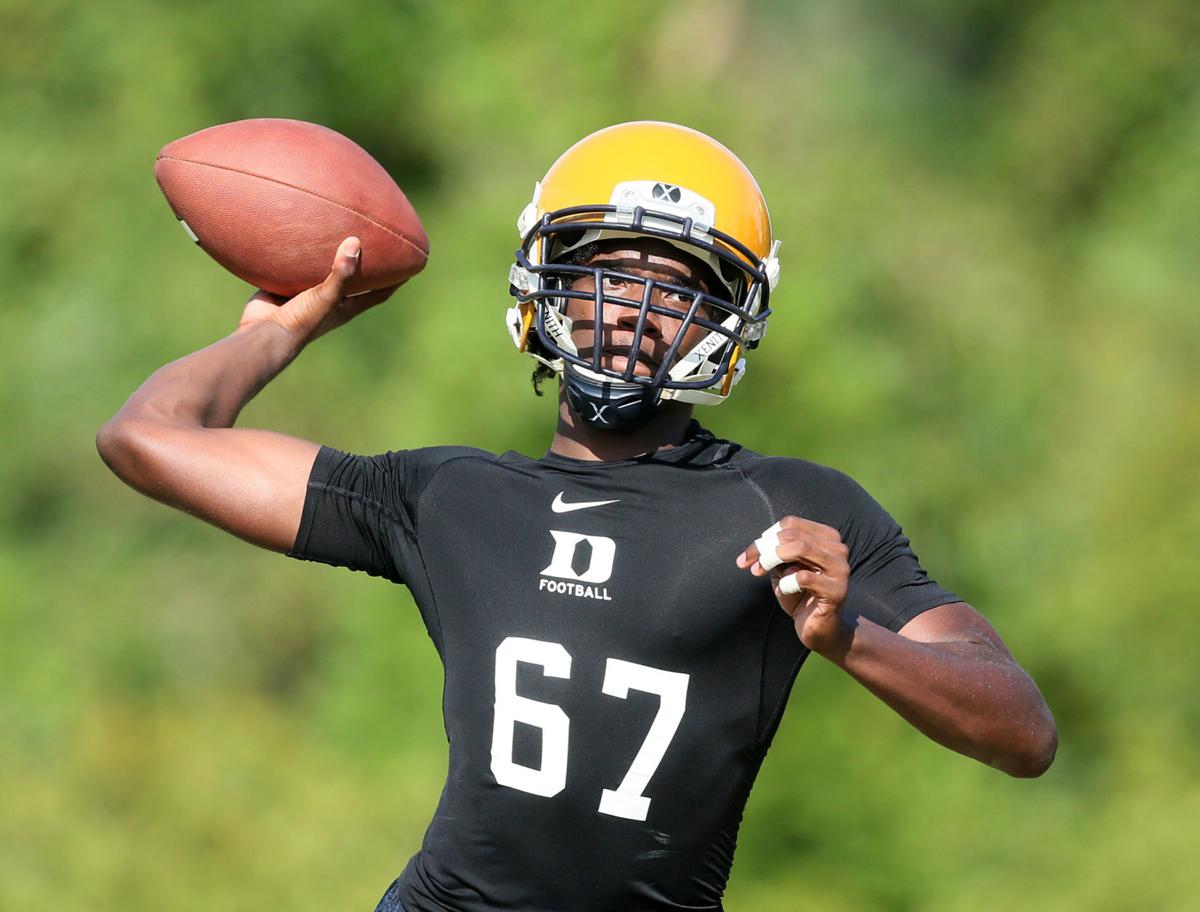 Jaquan Lynch was directing the offense near the end of a recent hot and humid practice. He was wearing a bright No. 16 practice jersey, and the Rocky Mount High quarterback zipped the ball all over the field. He threw a couple quick passes, and peppered in a few deep shots.

Lynch hit every throw to his receivers running down the sideline with a flick of his wrist. Though his yellow practice jersey indicated he was exempt from taking hits, the senior looked sharp. All according to plan.

Lynch is entering his third season as the Gryphons quarterback, and Lynch and his right arm will have an important say in how far Rocky Mount High goes this season.

“I came into this season knowing the offense more and it makes you feel comfortable,” Lynch said. “Coach Battle teaches me a lot about reading defenses and stuff like that, and we’ve been going over that stuff a lot. Comfortability means a lot at quarterback, just knowing that you can get the ball to go places when you need it to go there is huge.”

When coach Jason Battle named Lynch the starting quarterback two seasons ago, the longtime coach did so with a three-year plan in mind that crescendos to limitless possibilities 2019.

Lynch showed promise during his sophomore season by throwing for 1,415 yards and 16 touchdowns. As a second-year starter last season he threw for 1,283 yards and 10 touchdowns, guiding the Gryphons to the second round of the 3-A playoffs.

Now, as a senior, Lynch is poised to make the Gryphons go this season with a deep understanding of the offense and a talent-level that continues to rise.

“It’s worked thus far. That’s how we planned it when we took him as a sophomore,” Battle said. “We lived with some of the growing pains early. I’m not telling you anything that he wouldn't admit, but we went through games like Middle Creek when he first came up, like he just knew that if he would have made some different plays that would’ve changed that game around. But I’ve watched him grow and get better, and grow into what we expect him to be.”

Lynch will get to work with much of the same backfield and receiving group as last season, except for Rodell Bridges who graduated. Bridges was the team’s top rusher (802 yards and nine touchdowns) and receiver (18 receptions, 387 yards and three touchdowns).

Returning for their senior seasons are agile running back Tashaun Lawrence and Antwain Dunston, while junior McKenly Hines steps into a more prominent role running the ball. Top returning receivers Jalen Powell and Mar’Quevion bring back a combined 323 receiving yards.

Despite the relatively inexperienced receivers, Battle still intends to throw the ball to take advantage of Lynch’s talents.

“They've had an offseason together where they had a chance to grow and get a chemistry,” Battle said of the quarterback and receiver relationship. “So I'm hoping from that aspect we get better. But being able to make those connections in games is important in order for us to be effective. I really hate to waste a kid, because I like to be balanced as much as possible.”

On defense, the Gryphons have to replace the production of leading tackler Cedric Baker, but return plenty of production at linebacker and on the line. Starting free safety Matthew Cherry returns, and he’ll see time at linebacker as well. Also, Keeshawn Silver will be a player to watch his season as the incoming junior has received scholarship offers from a number of Division I programs.

The Gryphons are hoping the 6-foot-5, 250-pound defensive end, who is also seeing time at tight end, will make a leap this year in terms of his on-field production and leadership.

Silver made 31 tackles last year including 3.5 sacks. Battle said that what he has seen out of Silver during workouts this offseason is that the player is more cerebral. Silver has a better understanding of what his responsibilities are on a given play, as well as what techniques blockers were using to neutralize him in previous seasons.

“We had were having a conversation recently where last year there was a lot of frustration and thinking,” Battle said of Silver. “He was looking at film wondering why he wasn’t playing as well as he expected. Now he watches film and he understands, ‘This is what I'm supposed to be doing and here’s how I do it.’ It’s starting to click.

“He can watch himself on tape and understand what he needs to do now. He has high expectations of himself and he expects to produce. I want him to meet his goal, if he can do that within the scheme of what we ask him to do, we’ll be pretty good.”

RMH opens the season on Friday on the road against Tarboro, the reigning back-to-back 1-AA state champions. Tarboro is on a 30-game winning streak. Friday’s game against the Vikings kicks off a tough non-conference schedule for the Gryphons, who will play five playoff teams from last year in their first six games.

The difficult early-season schedule is by design as Battle hopes to figure out where his team is at by the time Big East Conference play begins.

“You go through the spring, summer, and the anticipation is here,” Battle said. “Like, man, I want to go out and find out exactly what we got.”

As for the season-opener against perennial power Tarboro, the hype isn’t lost on the participants.

“The lead up to this ballgame is so crazy because you have two communities that are filled with people who want to see it,” Battle said. “We haven't done it in a while, and now that it’s back it’s all you hear everywhere you go.”

Fast fact: The Gryphons have had just one losing season under coach Jason Battle. Battle is entering his eighth season after taking over in 2012. Since then Rocky Mount High has been to two state championship games with one title, and has a 65-27 record across Battle’s first seven years as coach.