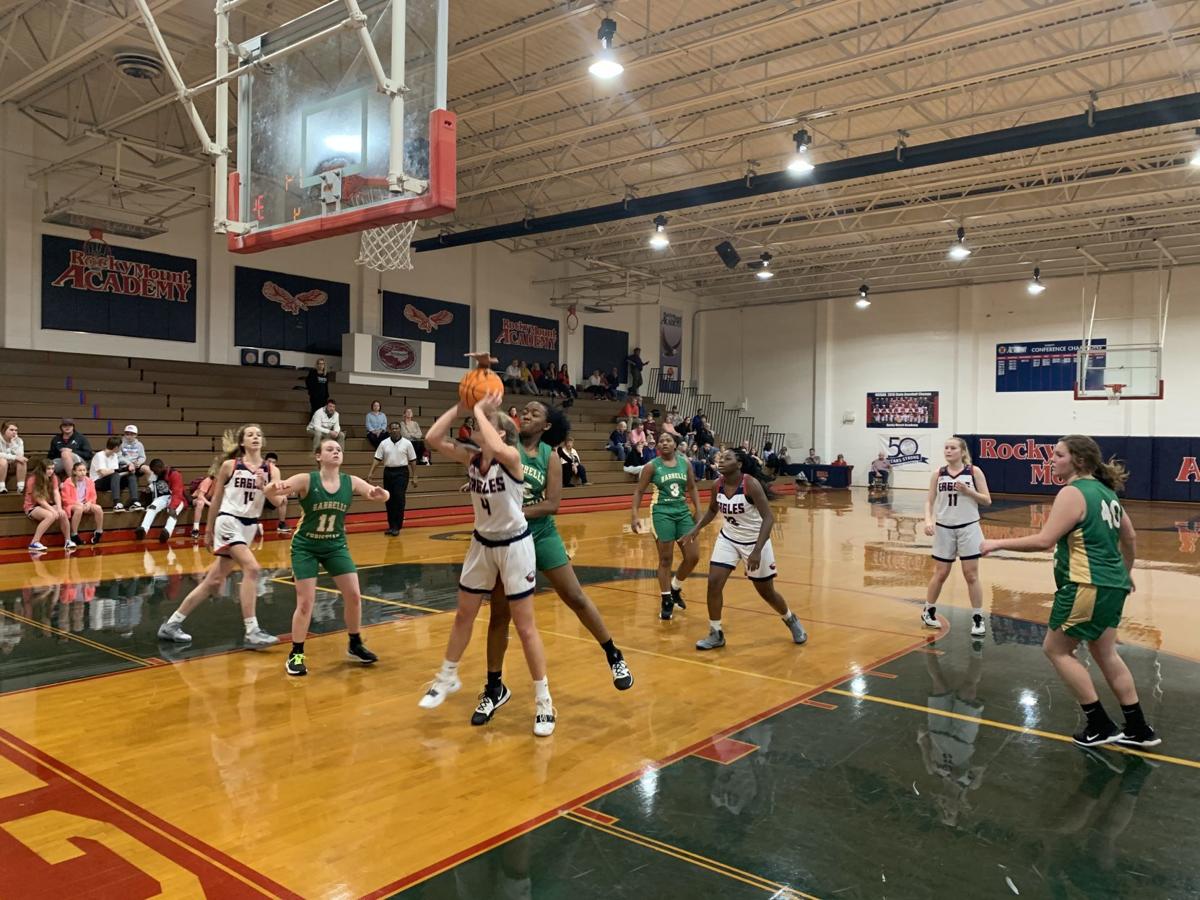 Rocky Mount Academy’s Ada Everette shoots while a Harrells Christian Academy player defends on Tuesday during the first round of the NCISAA 2-A state playoffs. The Eagles won, 52-36, and will travel to Trinity Academy on Thursday. 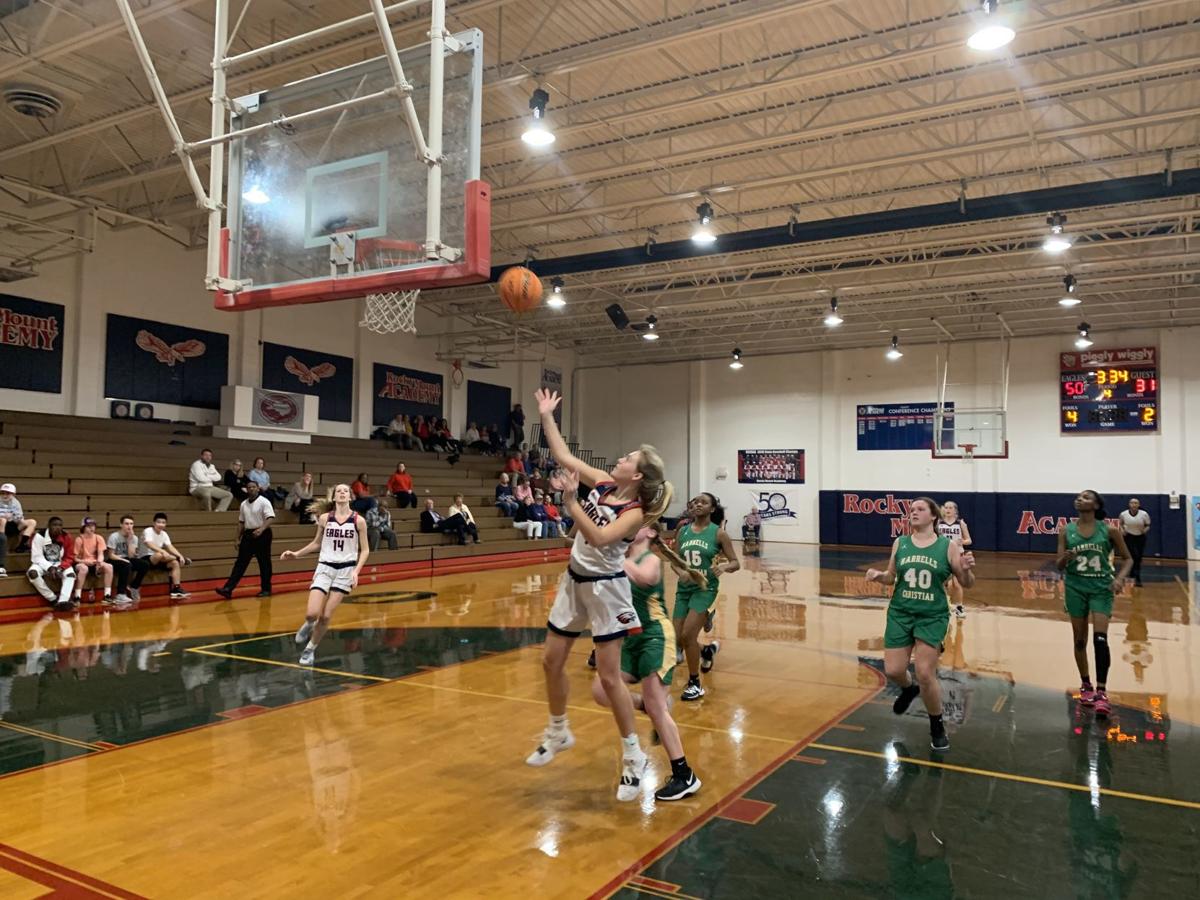 Rocky Mount Academy’s Ada Everette shoots a layup on Tuesday against Harrells Christian Academy in the first round of the NCISAA 2-A playoffs. RMA won, 52-36.

Rocky Mount Academy’s Ada Everette shoots while a Harrells Christian Academy player defends on Tuesday during the first round of the NCISAA 2-A state playoffs. The Eagles won, 52-36, and will travel to Trinity Academy on Thursday.

Rocky Mount Academy’s Ada Everette shoots a layup on Tuesday against Harrells Christian Academy in the first round of the NCISAA 2-A playoffs. RMA won, 52-36.

Mackenzie Davis understands that she should keep shooting. Especially when the shots aren’t falling.

Her coach, Katherine Johnston, tells the Rocky Mount Academy freshman to not be discouraged when the points aren’t flowing. Because when Davis does find the bottom of the net, the Eagles are in good shape.

The Eagles were in good shape before lone on Tuesday in the opening round of the NCISAA 2-A state playoffs. Davis started slow before finding her range in a second quarter that gave RMA a lead it wouldn’t give back in a 52-36 home win over Harrells Christian Academy.

“It was kind of rough in the first quarter, but I caught it eventually,” Davis said of her shooting. “My coach kept telling me to shoot and I had to work at it. But when they went in I was like, ‘I got it now.’”

Davis didn’t score in the first quarter, but kept at it and used a smooth jumper to drain shot after shot in the second quarter. It was in the second frame where she scored 14 of her game-high 16 points in helping RMA to the opening-round win.

“She’s a really good, athletic, instinctual basketball player. It seems to come easy,” Johnston said. “She is able to analyze her own shot, and fix what’s not working to make it work. She just has a natural jump shot. You don’t see a lot of girls with natural, untrained jump shots. I want her to shoot the ball.”

The victory advanced the Eagles to Thursday’s second round where they will play fifth-seeded Raleigh Trinity Academy (13-8), which had a first-round bye.

Tuesday’s game was the first in at least three games where RMA didn’t need to mount a second-half comeback. The Eagles led all the way.

They had trailed at the start of the third quarter in three of the past four games. In the CIC tournament, RMA mounted a comeback to squeak out a one-point win over Halifax Academy in the semifinals, then needed another comeback to earn a two-point win over Faith Christian in the title game.

“The harder games definitely pushed us to play harder,” Davis said of the second half of the close tournament games. “There’s no doubt in my mind it pushed us. I think it got us ready for (the playoffs) because there’s a different intensity. We had our heads in the game from the start.”

RMA led 10-9 after the first quarter, then pulled away with a 20-point second quarter while holding Harrells to seven points, good enough for a 30-16 halftime lead. The Eagles’ trap defense made it tough on their opponent to set up a halfcourt offense, and allowed just seven points in the third quarter, clamping down after the Crusaders scored the first four points of the quarter.

Harrells never drew closer than a nine-point deficit at 34-23.

And it’s that defensive effort that has been the Eagles’ identity all season long that has the players and Johnston thinking opportunistically moving forward. And when on the road, defense is something that travels well.

“We’ll play our style of defense and our style of game, and all we can do is be us,” Johnston said. “The longer the season goes on, the more trapping we’ve done. That’s how I coach. The more games we play, the more the girls have bought into playing aggressive defense.”

Added Davis: “With our defense, we’re comfortable anywhere. We got this.”