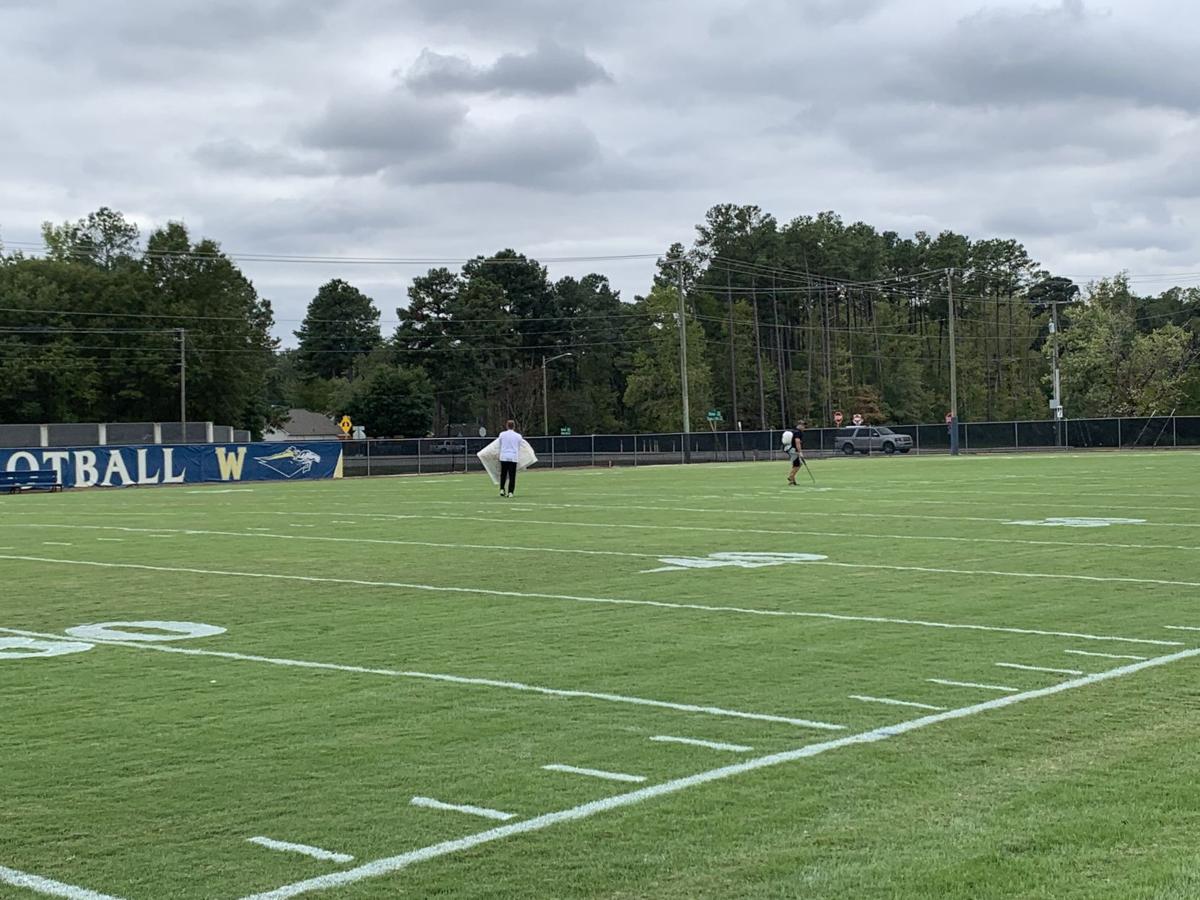 Workers paint N.C. Wesleyan's football practice field on Wednesday in anticipation of the Bishops' first home game on campus. The school transformed its practice facility into a game-ready field with plans to bring in bleachers and concessions. The team normally plays at the Rocky Mount Athletic Stadium. 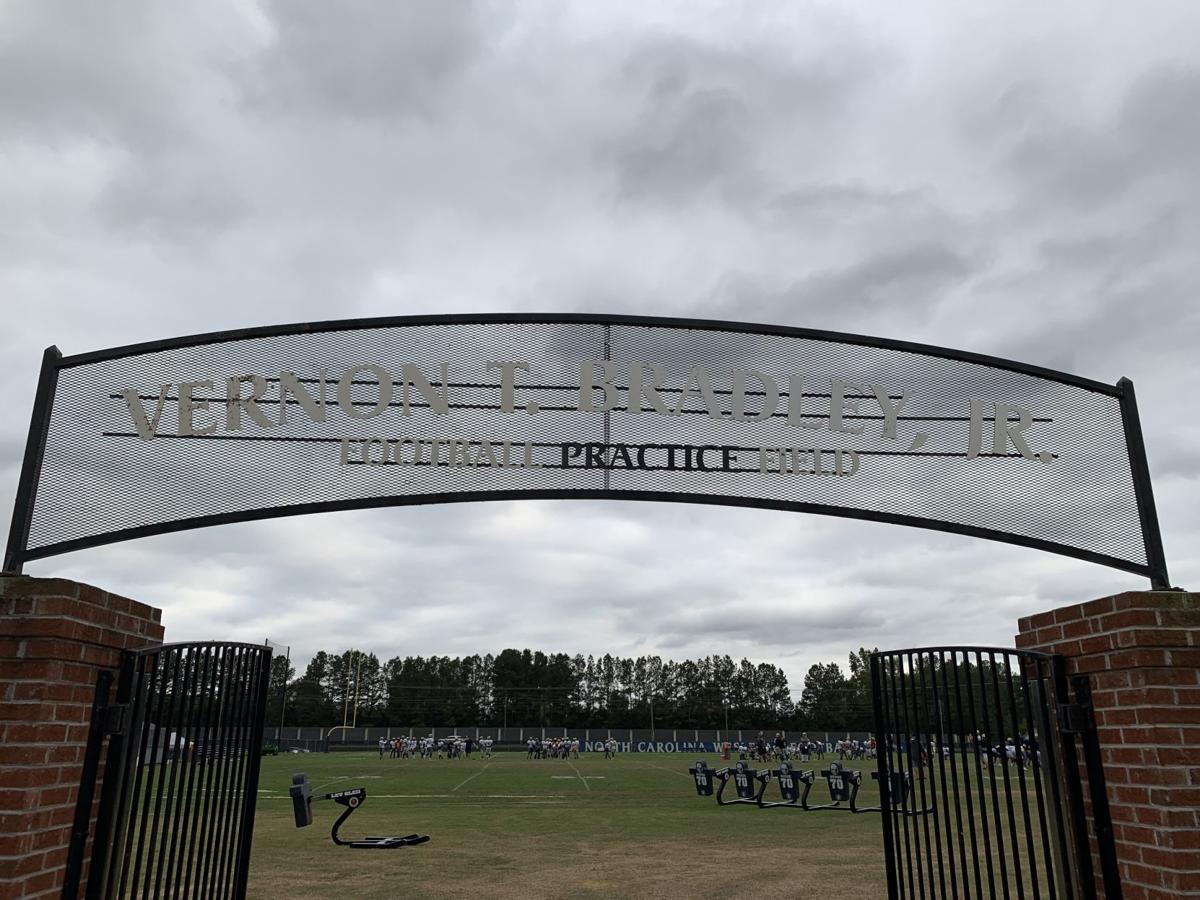 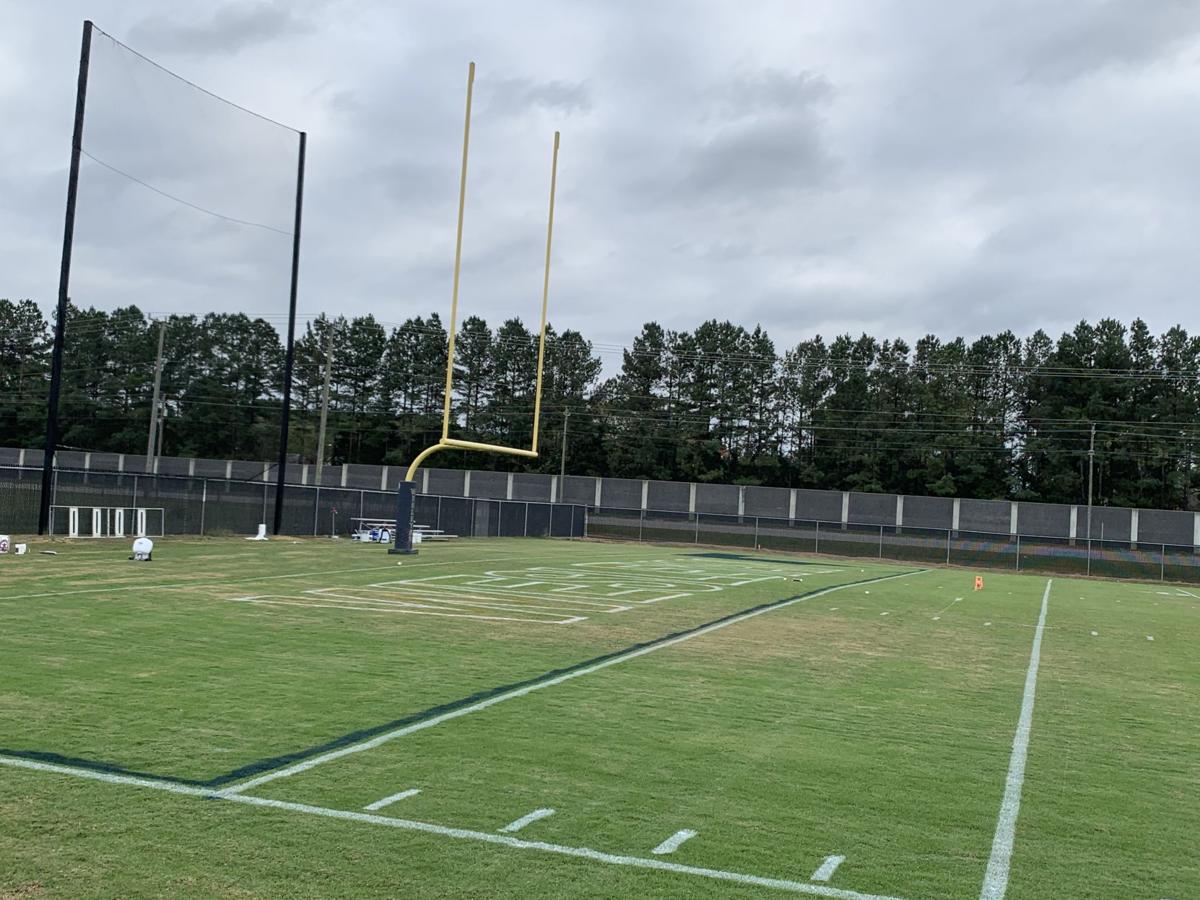 A look at the East end zone

Workers paint N.C. Wesleyan's football practice field on Wednesday in anticipation of the Bishops' first home game on campus. The school transformed its practice facility into a game-ready field with plans to bring in bleachers and concessions. The team normally plays at the Rocky Mount Athletic Stadium.

A look at the East end zone

Antonio Johnson is playing his fourth season of football for N.C. Wesleyan, and over that time he has walked onto the team’s practice field located on the school’s campus countless times.

Yet when Johnson heads out to that same patch of grass on Saturday everything will look different. The linebacker and his teammates will be in full uniform, and the field will be dressed up, too.

On Saturday, NCWC will play its first true home game in program history on the college’s campus when they host Greensboro College at noon.

“It will be a lot nicer to walk out here from the locker room to something that’s yours,” Johnson said at practice on Wednesday. “It’s going to be a change. A good change. I think it will be a big boost for the school, and it will be really fun and exciting to see what happens.”

The Bishops have used the Vernon T. Bradley Jr. football practice field — a large, open field situated behind the softball diamond — as their workplace between games and throughout the offseason.

Normally for each home game the team loads up a bus and drives 4.2 miles from campus to the Rocky Mount Sports Complex where NCWC hosts opponents in the 5,000 spectator capacity stadium.

On Saturday, no travel is required. The players will be able to stay on campus and walk out of the locker room to the game. The students who consume football won't have to drive, either.

“It will be a different feeling to walk out on this field not for practice but to play an actual game,” senior quarterback Donielle Totten said. “That’s what pumps us up the most. It’s a blessing and an honor to have this opportunity and to be a part of the first team that gets a chance to do this.”

The college transformed half of the team’s practice space into a game-ready field. Workers could be seen putting the finishing touches on the field Wednesday afternoon. The yard lines had already been painted, the end zone stencils were in place, and the Bishops’ team logo at midfield was next up to be placed and painted.

A net was erected behind each goal post to keep field goal attempts from soaring into Bishop Road on the West end, and out of a barren field on the East end. Mobile bleachers, which looked like life-sized Transformer toys halfway through their conversion, were ready to be placed alongside the field.

The bleachers can hold more than 700 fans, and NCWC estimates the entire available seating capacity to be around 1,100. The student body will have its own section behind one of the end zones, while fans will be able to bring folding chairs as well. A concessions stand will be set up, as well as accessible bathrooms.

The scoreboard isn't yet up to par, but everything else looks well-thought out and game ready.

Athletic director Aaron Denton said that Saturday’s game is a test run of sorts as the plan to play football games full-time on campus is a goal for the college in the coming years.

At halftime, the classes of 1969 and 1994 will be honored as part of the homecoming activities. The cost to attend the game is $6, and kids 6-and-under get in free.

And with the game a few days away, the athletes are looking forward to the atmosphere that comes with playing football on campus.

“It looks good. They did a lot in a short period of time and I appreciate everybody helping us out,” Johnson said of the field. “It will make for a better football game, playing it here. It will have a real college football feel to it. That’s how a lot of other schools are set up on their campus, and it’s a fun atmosphere for them, so I like that we’re trying to transform into that.”

The hope is that the game is well-attended by the student body, which hasn’t yet been able to walk from dorm to game. That will change.

As for Totten, who also plays on campus as part of the NCWC baseball team, he thinks that the students have been craving a football game on campus.

“We have a different type of fan that come out to baseball," Totten said. "You have football fanatics all across campus, so this is something that I feel like they can really enjoy. And it’s a first for them as well as for us to see a game on campus, so I think it’s good for the student body and for us as football players.”