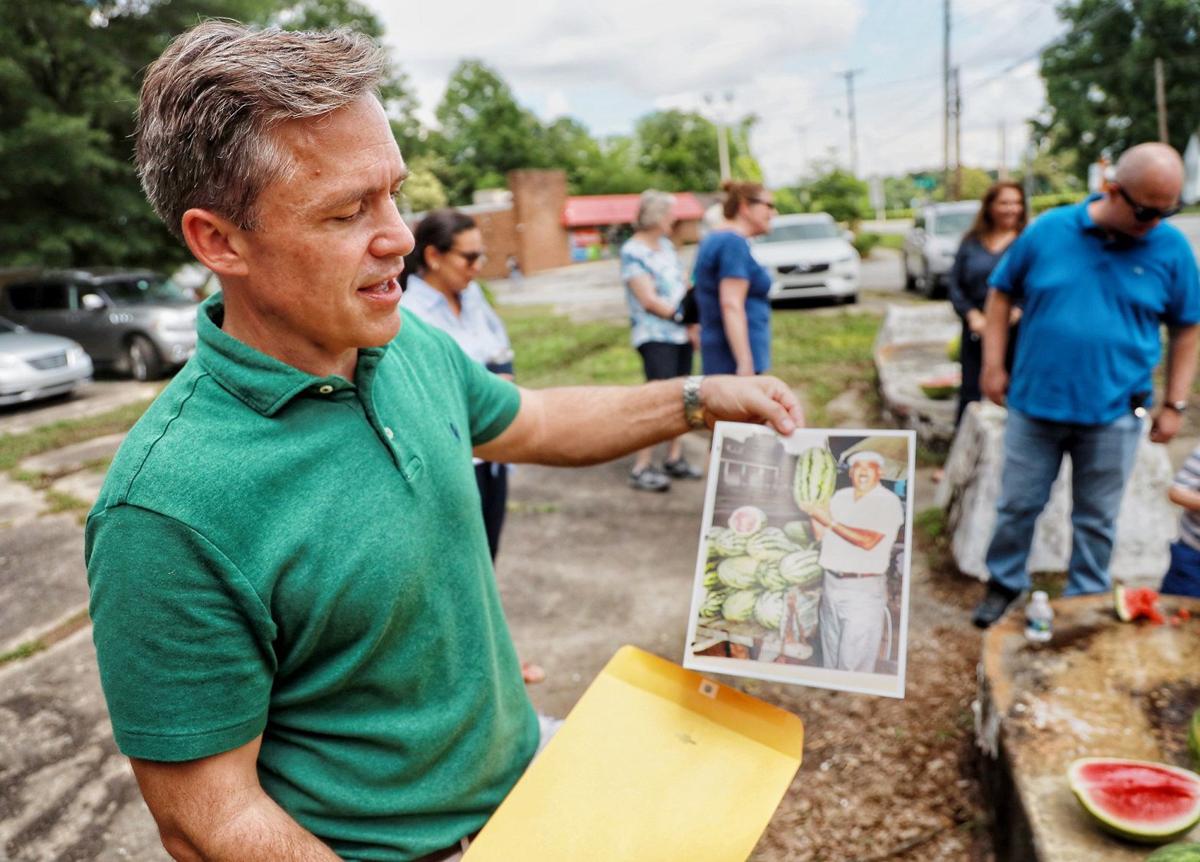 Yezen Hamad holds a photograph of his father, Sobhi Mohamed ‘Mack’ Hamad, known as the ‘Watermelon Man,’ on Saturday at the original Mack’s Produce Stand on East Raleigh Boulevard. Below, Yezen Hamad gives a piece of watermelon to Gabe Geoffrion at the stand. 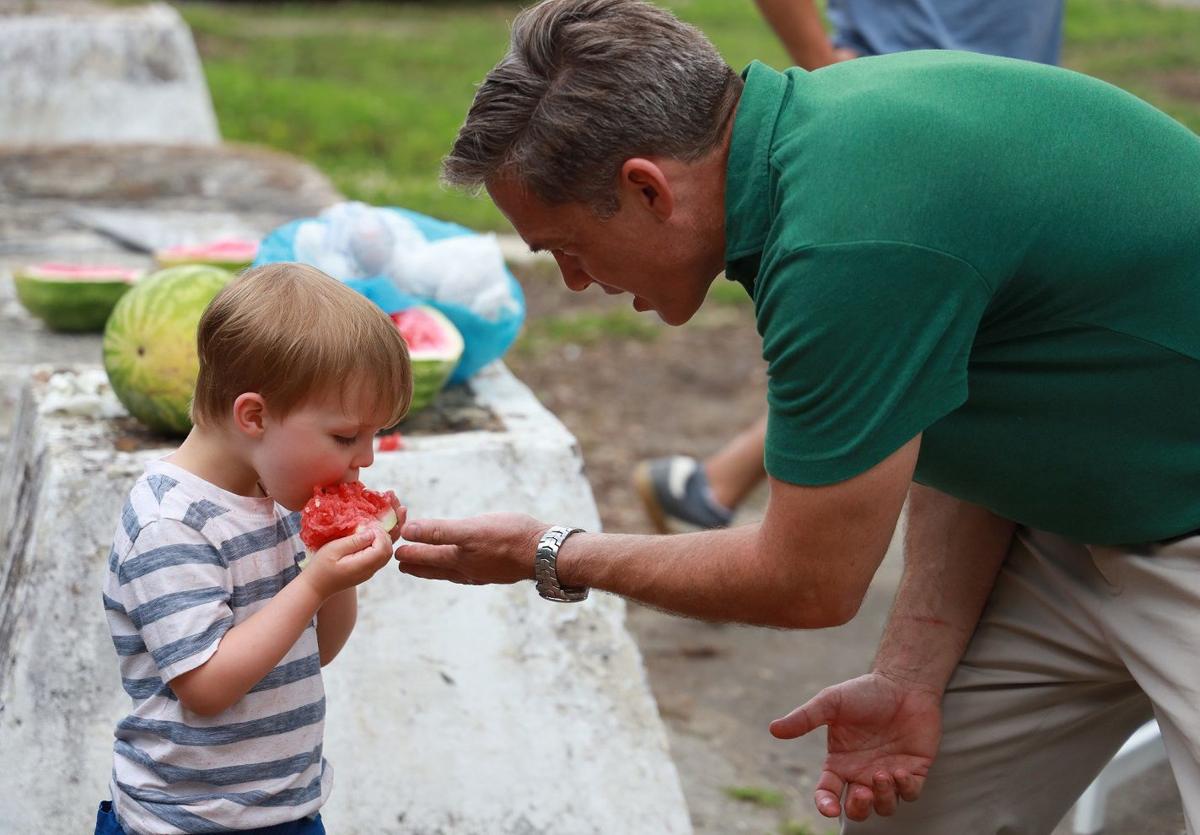 Yezen Hamad gives a piece of watermelon to Gabe Geoffrion on Saturday at the orignal Mack’s Produce Stand on East Raleigh Boulevard. 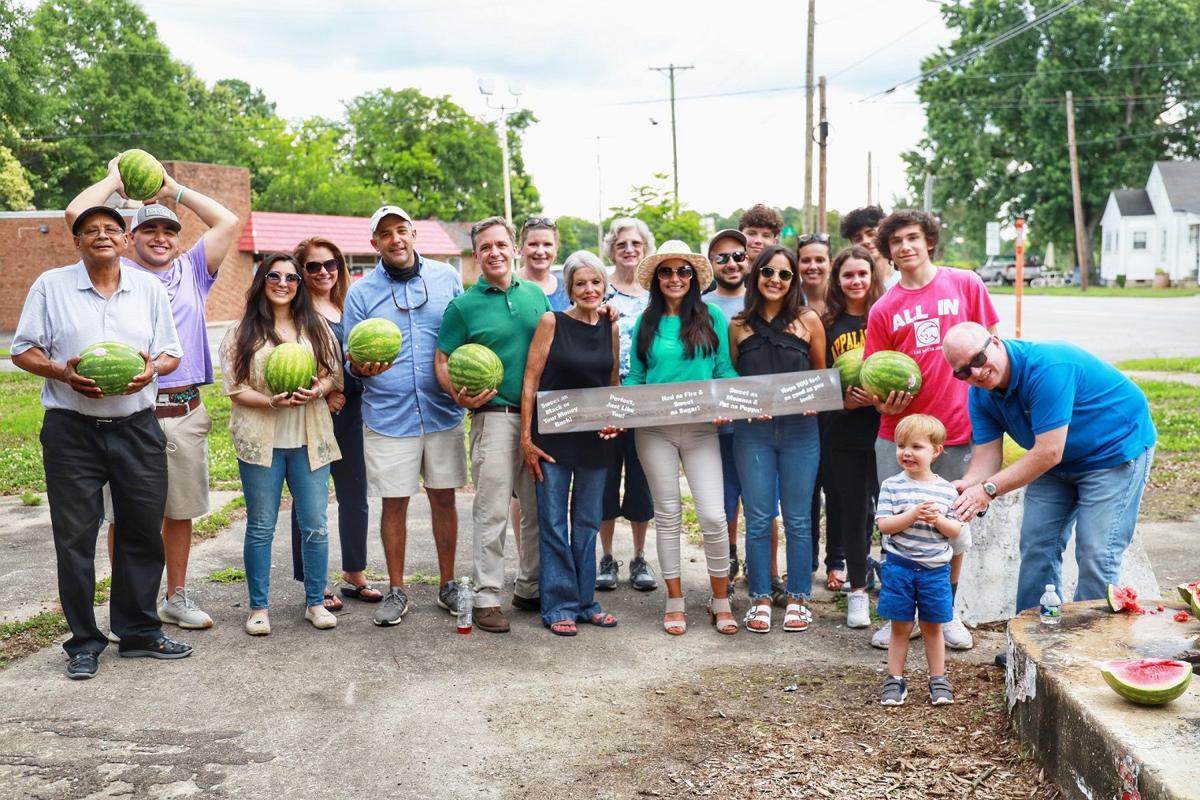 Friends and family gather on Saturday to remember and honor Sobhi Mohamed ‘Mack’ Hamad, known as the ‘Watermelon Man,’ at the original Mack’s Produce Stand on East Raleigh Boulevard.

Yezen Hamad holds a photograph of his father, Sobhi Mohamed ‘Mack’ Hamad, known as the ‘Watermelon Man,’ on Saturday at the original Mack’s Produce Stand on East Raleigh Boulevard. Below, Yezen Hamad gives a piece of watermelon to Gabe Geoffrion at the stand.

Yezen Hamad gives a piece of watermelon to Gabe Geoffrion on Saturday at the orignal Mack’s Produce Stand on East Raleigh Boulevard.

Friends and family gather on Saturday to remember and honor Sobhi Mohamed ‘Mack’ Hamad, known as the ‘Watermelon Man,’ at the original Mack’s Produce Stand on East Raleigh Boulevard.

As children, many of us are taught that things appreciate in value over the years.

Obviously, some things grow more in value than others, while some things, which might seem to be of little worth, turn out to be priceless.

He and his family operated a neighborhood store in the Little Raleigh area of Rocky Mount named Mack’s Superette & Fresh Fish Market and operated Mack’s Produce Stands throughout Rocky Mount and Wilson for over 40 years. He was known for having the best watermelons in town.

Back in July 1983, Hamad and his son, Yezen, were headed out on North Mercer Street in Rocky Mount to the farm to gather a load of watermelons to sell on a very hot day.

It was a common practice for Hamad, who was known as Rocky Mount’s “Watermelon Man,” and they headed out in Hamad’s two-ton Ford F-150 pickup to all of their neighborhood hot spots.

On this particular day, young Yezen was especially interested in selling watermelons, as he had negotiated a deal with his Yaba (dad) to get 10 percent of the day’s sales to go toward a coveted Diamond Back BMX Viper bicycle.

Yezen recalls that his then-current bike was equipped with one of those “not-very-cool-looking” double seats.

“I clearly wasn’t earning any cool points with the neighborhood kids by having an ‘extra’ seat,” he told the Telegram.

Yezen also recalled that his Yaba never really cared much about having a lot of money.

“He just tried to make sure he and the people he cared about had enough,” he said.

Still, Yezen said he was not about to let what he felt to be a relaxed fiscal attitude prolong his extra-seat status.

“I wanted that Diamond Back Viper ASAP,” he recounted.

Thus, the 10-year-old designated himself as the CFO — chief financial officer — of the Hamad family’s one truck, one-and-a-half-man watermelon empire.

Yezen remembered keeping up with what he called the “in and outs,” or debits and credits, and stored the money he and his Yaba collected in a Captain Black Tobacco can.

“We paid for our watermelon load for the day from yesterday’s earnings,” he recalled. “Dad would let me pay the farmer from the tin can.”

He said his dad “was awesome about including me in every step of the process. He even let me go to the field to pick the watermelons so I could appreciate the entire process. We left the farm with our bumper scraping about every 100 yards.”

The sales day started strong, with nearly half the load going in just a couple of hours.

“Everyone knew Mack had the best watermelons in town, and it was pay day, so that made it easier,” he said.

Yezen said the move to the second neighborhood was not that good.

“I was getting a little nervous, too, because we had not even made back what we paid for the load and I had not really done the exact math on what 10 percent of a negative number — my share — would be,” he recalled, “but I was pretty sure whatever the amount, it was not going to help me get rid of that extra seat on my bike.”

As no one was buying watermelons, he said his dad pulled his truck over and sounded the special air horn he had installed.

He remembered that the horn would only play one song, “Dixie.”

“We just knew it was loud and it worked,” he said.

Young Yezen appreciated it because it allowed him to take a break from screaming out the back of the truck, “Watermelon, watermelon, red as fire and sweet as sugar!”

Sales picked up a bit, but not enough.

“I hopped in the back of the truck ready to unload the rest of the watermelons. We sold a few, but not enough for me to get that Diamond Back Viper and not enough to break even,” Yezen said.

He said a woman came to the back of the truck and looked at his father with worry in her eyes.

“Mack, I really would like to get a watermelon, but I haven’t gotten paid in a while. Are you coming back next week?” she asked.

His father said he would be back, but told her to go ahead and take the melon so that she and her family could enjoy it immediately.

“Pay me when you can and if you can,” he told her.

All the time, young Yezen was trying to get his attention to convey the message that they were not in business to give watermelons away.

“Before I could finish my sentence,” he said, “Dad cut his eyes at me in a way that clearly meant, ‘You better not say another word.’”

Waiting quietly, Yezen said he listened closely to the rest of their conversation.

With their sales day over, father and son got back into the cab of the truck.

“I was fuming,” Yezen recalled. “We were working backwards. We were giving away produce and we still had not turned a profit.”

He said he felt the need to explain the process to his dad: “Yaba, if we don’t sell the load of watermelons for more than we paid for them, then we will not make any money. We have to sell each watermelon for what it’s worth. We cannot give watermelons away.”

He recalled a determined look in his dad’s eyes as he asked, “Did you hear what that lady said after we gave her the watermelon?”

His dad noted, “That’s right. How much do you think a blessing from God is worth? Now, you tell me how much one watermelon is really worth? I think we got a bargain. How about you put that in your tin can.”

Yezen said his dad paused to let that lesson sink in before adding, ”We did not have to sell the entire load of watermelons today, son. We only had to sell enough to make room for your new bike. Let’s go get it.”

Yezen said that his dad did not care whether the woman was telling the truth about not being able to afford the watermelon.

“All he knew was his intentions,” he said. “That’s all any of us know — our own intentions. And with the best of intentions and a little action, the rewards are immeasurable. Dad may have, in some instances, given away more watermelons than he sold because he saw great worth in people.”

What about that Diamond Back Viper BMX bike?

“I loved that bike for about three months, tops,” he admitted.

But the lesson learned from that day and with the help of that Diamond Back Viper BMX bike and a truckload of watermelons has lasted more than 35 years.

The Hamad family on Saturday hosted a special watermelon giveaway to honor the life and legacy of “Mack” Hamad at the original Mack’s Produce Stand on East Raleigh Boulevard.

Yezen Hamad said the family wants to offer special thanks to the Jackson Farming Co., Dean’s Farm & Market in Wilson and Lynda Loveland of the N.C. Farm Bureau for their help with the event.