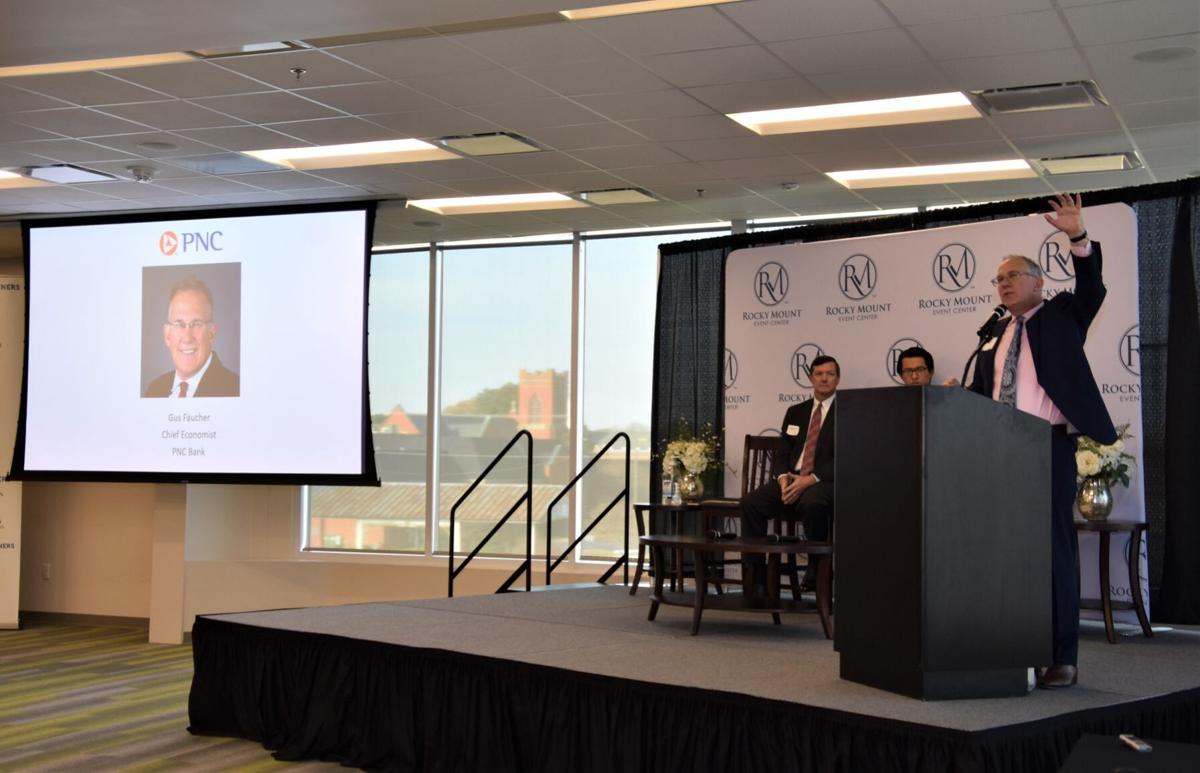 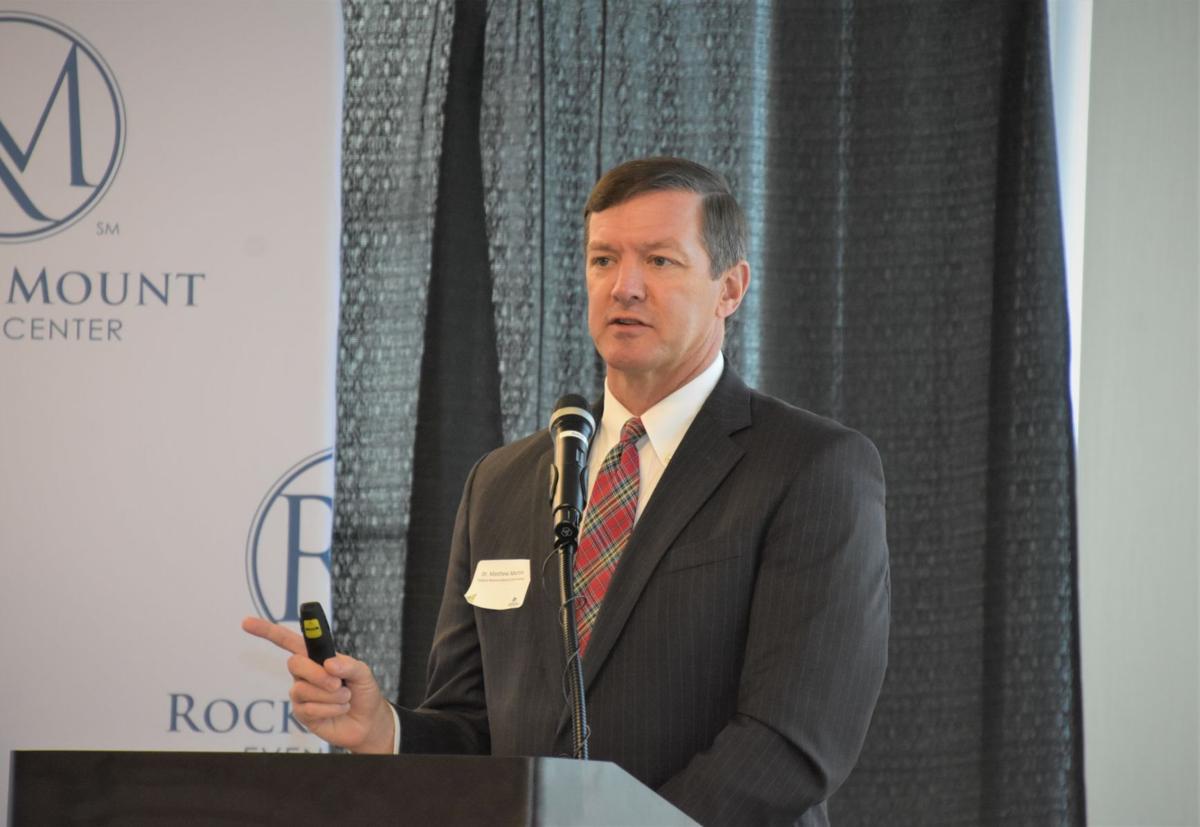 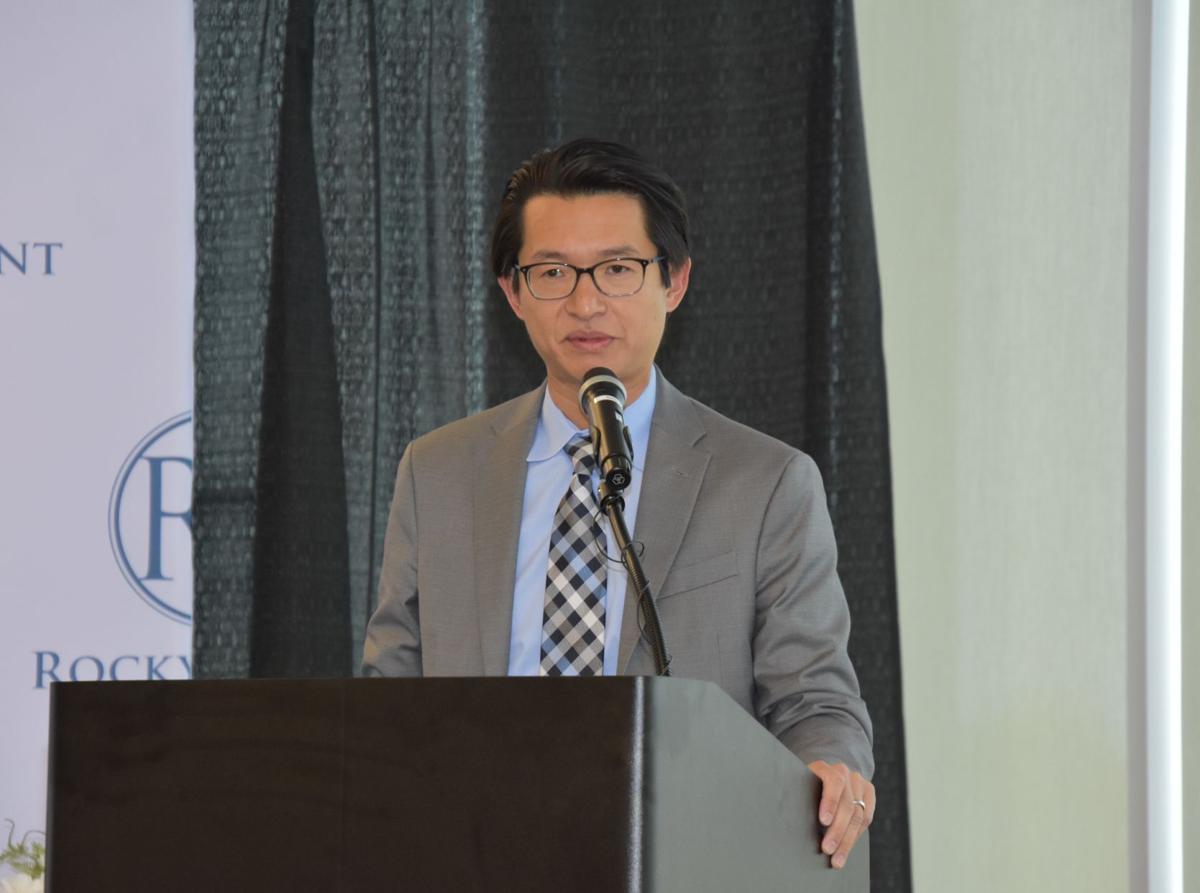 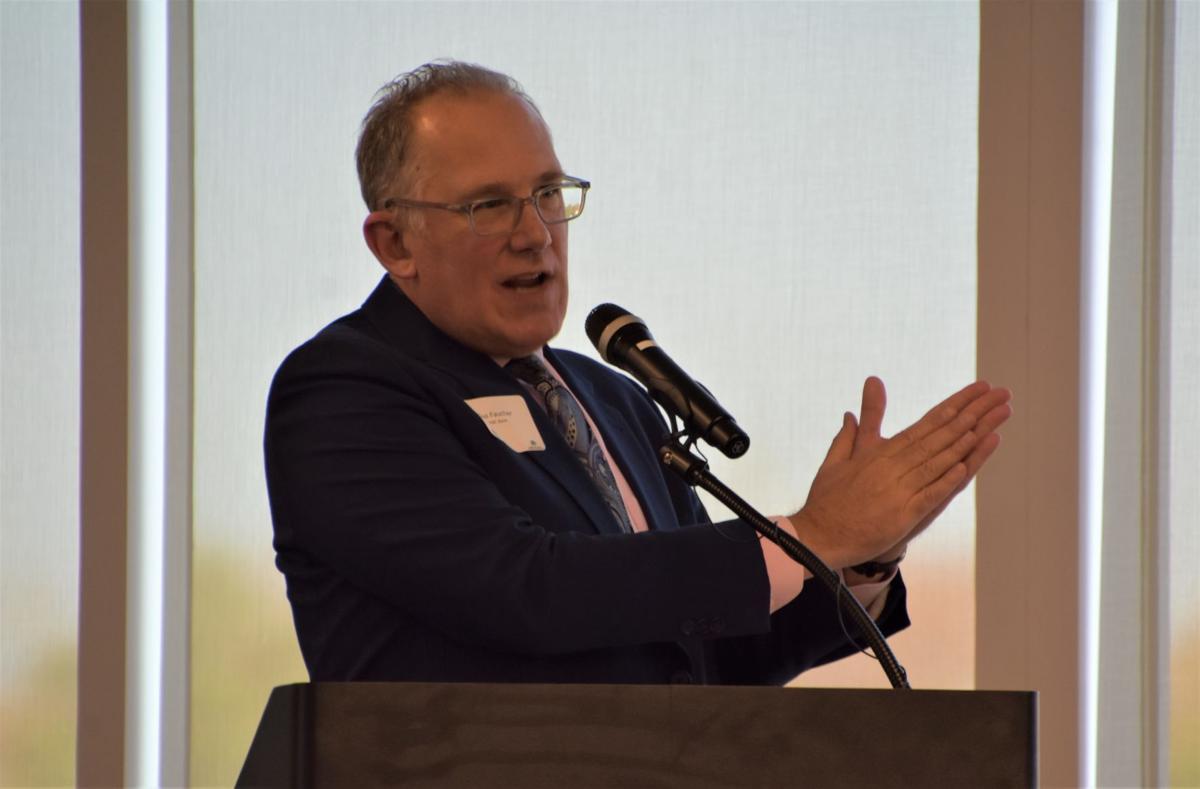 The Rocky Mount Area Chamber of Commerce’s annual economic summit Thursday morning included PNC Financial Services Group’s chief economist, who told a gathering at the Rocky Mount Event Center he believes the outlook nationally is for continued and solid improvement in the economy the next couple of years.

The economist, Gus Faucher, said he is forecasting continued improvement in the labor market, with the unemployment rate gradually falling and people returning to the labor force.

Faucher also said he believes probably sometime late this year or early next year that, “We’re likely to see inflation peak and then start to recede as businesses figure out a way to work through some of these supply chain issues, as we start to see more people come back into the labor market — and perhaps reduce some of these wage pressures.”

Faucher told the gathering that the economy nationwide is in recovery, but that recovery does not necessarily mean the economy is good.

Rather, Faucher said, “It’s just that the economy is better now than it was if you think back to the spring of 2020” amid the spread of the coronavirus.

Faucher noted that the nation produced 10 percent fewer goods and services in the second quarter of 2020 than prior to the pandemic and that employment fell by roughly 22 million people in the span of a couple of months.

He said the good news is the economy is recovering thanks to low interest rates and financial support from the federal government.

He cited the Paycheck Protection Program that provided low-interest loans to small- and medium-sized businesses, along with expanded unemployment insurance benefits and rounds of government-issued economic stimulus paychecks to American households.

He also said there is about $2 trillion that households have resulting from having put money aside in extra savings.

At the same time, Faucher emphasized the recovery is incomplete in some ways, with consumer spending on goods well above the pre-pandemic level and with consumers buying a lot of physical things, which, in turn, helps explain why there are difficulties in the supply chain.

“Producers have not been able to keep up with that much stronger demand for goods that we are seeing in the U.S. economy,” Faucher said.

Faucher also said consumer spending on services is still down about 2 percent prior to the pandemic and said some of this is because of a continued reluctance of people to go out in public.

Faucher also cited the difficulties those in the service industry have in finding workers.

Faucher said that one of the big concerns with the recovery is the state of the labor market and that there are roughly three million fewer people in the U.S. labor force than prior to the pandemic.

He said a lot of people dropped out of the labor force for a variety of reasons.

He also said he believes that some of them dropped out of the labor force because of the greater availability of assistance from the federal government.

Faucher said what subsequently has been happening is that businesses, in order to recruit workers, have been having to raise wages, which has, in turn, meant a strong growth in hourly pay to lower- and middle-income groups.

Martin said regionally, North Carolina as a state tends to outperform the nation as a whole.

“We’re a fast-growth state, but most of that growth tends to happen in our largest metro areas, right?” Martin said.

Martin noted that in most years the Research Triangle and Charlotte-Mecklenburg areas probably account for more than half of that growth.

He said what is interesting about a place like Rocky Mount is that, “You’re sort of in the orbit of one of those fast-growth areas and finding that connection sort of to get your piece of it.”

Martin said one thing he is hearing about that perhaps is not being captured in surveys is that more and more people are becoming self-employed, with the number of new businesses having formed skyrocketing.

Martin said this might be because of people being in the gig economy — that is, working as freelancers or based on short-term contracts — while they figure something else out, but he also said he hears from people in the professional crowd who have started their own businesses for one reason or another.

The organization is a nonprofit that contracts with the state Commerce Department and also is the state’s tourism promotion agency.

Chung said he does not believe he can recall a time when there has been so much activity in terms of companies looking to set up some kind of a new location for distribution fulfillment, food processing or manufacturing.

“I worry about burnout, frankly, for our team because it’s that level of activity,” Chung said.

Chung also said the sizes of the types of prospects being considered for North Carolina are larger than he and his team have seen as an organization. In fact, he said, there are easily a dozen prospects proposing to spend at least $1 billion.

He also made clear there has been a triggering of a demand for new manufacturing capacities, including to fill critical gaps in the supply chain.

He said there has been a problem getting international firms to expand into and set up new operations in the U.S.

He cited difficulties of representatives of those companies being able to travel to the U.S. from around the world amid the coronavirus pandemic, which, in turn, affects their ability to consider spending millions of dollars on a new location in the U.S.

“They can’t do that over Zoom, right?” Chung said of the internet-powered telecommunications application. “They have to come here. They have to extensively evaluate different locations to figure out the best fit.”

Chung said there has been quite a strong rebound in tourism spending in the state.

Chung said he believes part of the reason is probably because people, due to safety reasons resulting from the pandemic, have greater flexibility to work wherever they want to do so.

“So they can go rent a home for a couple of weeks in the Outer Banks and do their work from there,” he said.

Chung said another reason could be because people cannot travel or do not want to travel via airline because they are still worried about the coronavirus.

“We’re a great drive destination, which makes us very attractive for those leisure travelers,” he said.

The summit lasted more than two hours and the Telegram intends to provide more coverage over the coming days about what else was said.