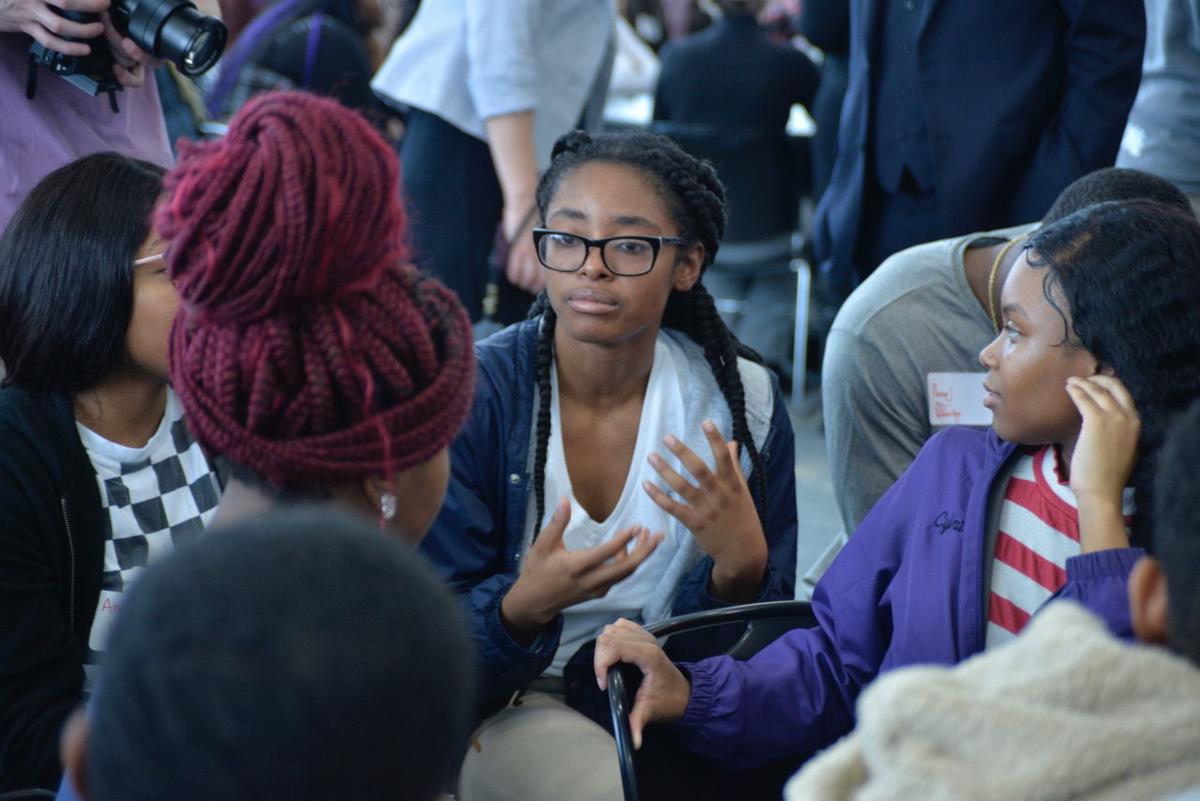 Tarboro High School junior Nyla Guilford asks a question Tuesday during the roundtable session of the Rural Student Forum at Edgecombe Community College in Tarboro. Below, superintendent of public instruction candidate Craig Horn answers questions from students during the forum. 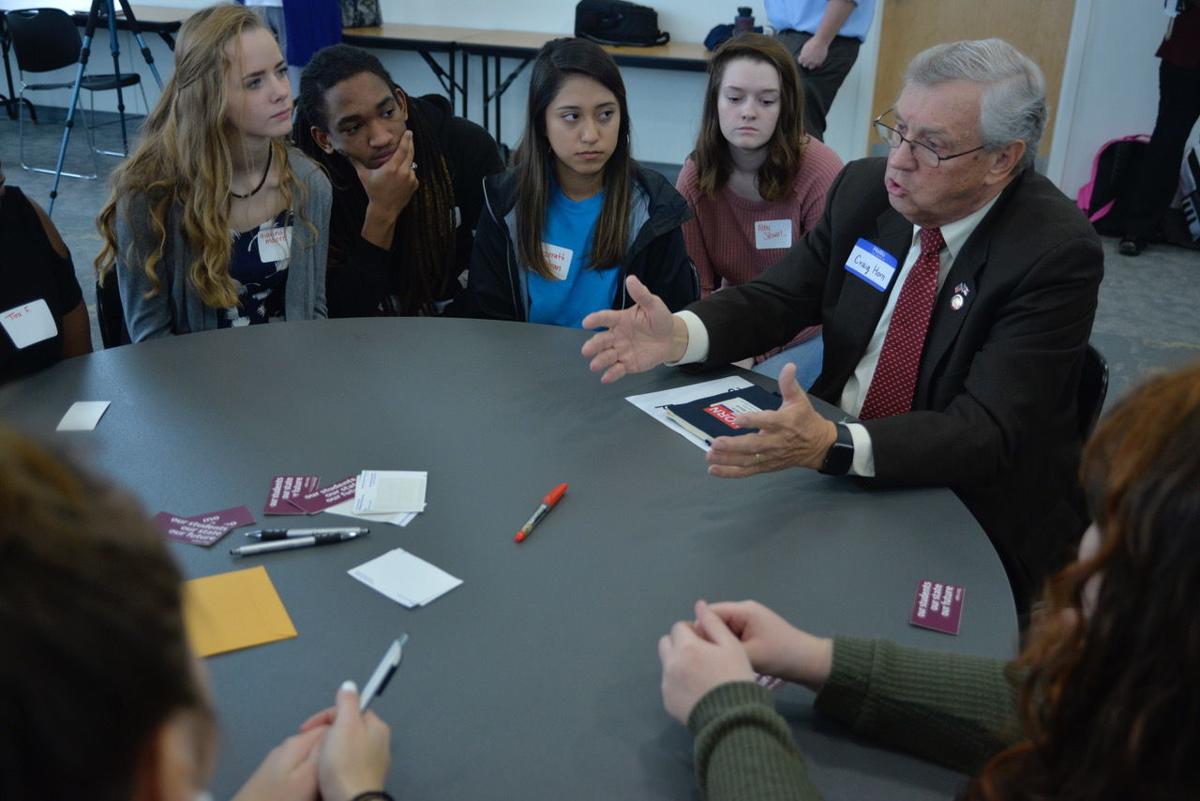 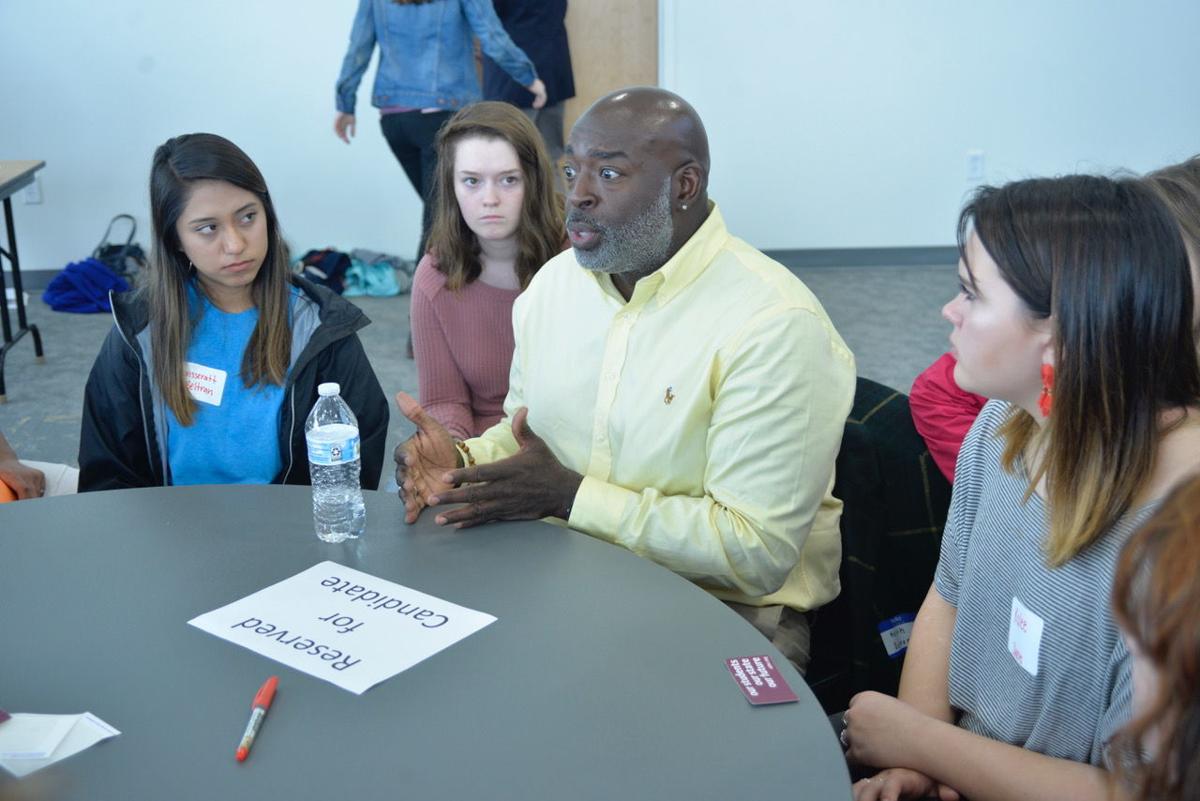 Tarboro High School junior Nyla Guilford asks a question Tuesday during the roundtable session of the Rural Student Forum at Edgecombe Community College in Tarboro. Below, superintendent of public instruction candidate Craig Horn answers questions from students during the forum.

TARBORO — Some Edgecombe County students had the opportunity Tuesday to participate in a first-of-its-kind town hall meeting that allowed them to meet with candidates for state superintendent of public instruction and discuss issues relevant to public education.

Roughly 100 student representatives from Edgecombe County’s four high schools attended the forum where five of the seven candidates for the office came to speak on issues chosen by students in the school district and to listen to their concerns about their futures and the future of public education in the state.

The candidates who participated in the event included Republicans Craig Horn and Catherine Truitt and Democrats James Barrett, Michael Maher and Keith Sutton.

The Rural Student Forum was jointly hosted by Edgecombe County Public Schools and EducationNC, an educational research and media organization that focuses on educational issues in the state.

Mebane Rash, CEO and editor-in-chief of EdNC and the N.C. Center for Public Policy Research, was on hand Tuesday to help explain the thought process behind bringing students and candidates together in this way.

“We wanted to pilot a new kind of town hall and think about what that would look like. We wanted to focus on the future of democracy and our students’ role in creating that future. We did six town hall meetings without candidates getting to this point. But we wanted the students to inform the process,” Rash said. “We hope to reiterate this event somewhere in the fall.”

This town hall meeting was not the typical one where candidates drone on about their agendas and answer polite surface questions about their qualifications and ideas. This was a very visual, energized, student-led process that involved personal engagement and forced candidates to listen and dig deep in giving responses.

The event, which was held at the new Center for Innovation on the Tarboro campus of Edgecombe Community College, began with a “Who are you” activity. A student interviewed each candidate in front of the assembly by asking “Who are you?” repeatedly, forcing them to dig down into different aspects of their roles and responsibilities.

“We wanted this event to be authentic to this place,” Rash said. “This is a method that is used here in Edgecombe County to introduce people to each other so they can get to know them in a more authentic and deeper way, so we wanted to include that.”

Another activity involved having the moderator ask candidates their opinions on several different topics that students helped select. The topics ranged from education funding to positions on universal pre-K education. Candidates had to literally take a stance on these issues by moving to different positions on the stage that indicated their degree of approval of the statements.

“This was a quick way of seeing where the candidates stood on these issues,” Rash said.

The final activity was a series of roundtable discussions. The five superintendent candidates rotated among the tables answering questions and hearing student responses on six different topics of discussion that the students themselves helped to craft.

An example of these prompts, many of which focused on education in rural North Carolina, included one on mental health issues.

“Many rural students live in poverty, have mental health issues like anxiety or depression or deal with ‘life challenges’ that have nothing to do with school. How are we supposed to learn or care about our futures when we need help now and can’t get it?” the students asked.

Rash said these prompts were examples of how student-led input helps change the conversation.

Rash said Edgecombe County was chosen as the first site for this new town hall approach not only because Edgecombe County Early High School Principal Matt Smith is the current state Principal of the Year, but also for other reasons as well.

“Edgecombe County is really leading the state — and even the nation — in terms of thinking about student-led redesign of education,” Rash said. “These students have all done deep identity work. They not only know who they are in the world, but who they are in the power structure. So they are very comfortable using their voice.”

The candidates seemed to appreciate this different approach to campaigning. Maher said several of the questions he heard that day were ones he had never been asked before.

“I have been involved in roundtable discussions before, but not with students. This was really unique,” Maher said. “It was fantastic, and I learned a lot. It was much harder being interrogated by students because they live education policies every day, so it is a very different perspective. But it was actually a really energizing event.”

No matter how the election turns out, Edgecombe County Public Schools Superintendent Valerie Bridges said the event was valuable for the students.

“I think this is a great opportunity for our kids because sometimes kids get left out of this process,” Bridges said. “This will be a good lesson for these students. They won’t forget this experience.”