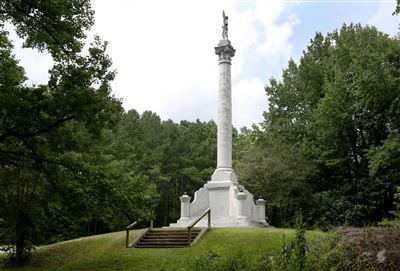 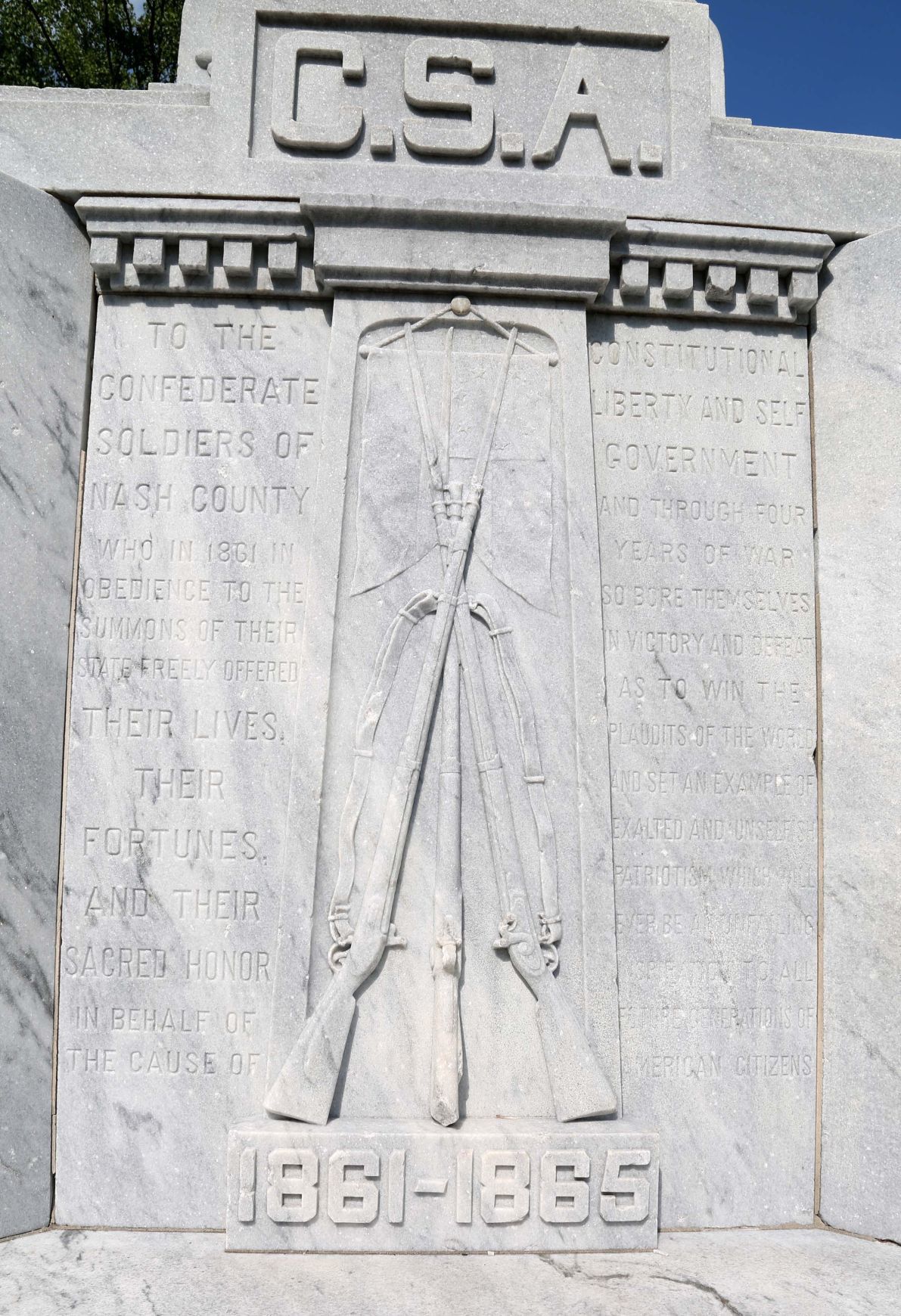 One of the inscriptions on the monument states it is dedicated to the Confederate soldiers of Nash County.

One of the inscriptions on the monument states it is dedicated to the Confederate soldiers of Nash County.

The City Council on Monday heard from a line of speakers about the subject of the Confederate monument just south of the vehicle entrance to Battle Park.

In a 6-1 vote earlier during the regular meeting, the council approved a resolution formalizing the specifics of a 6-1 vote during the June 2 budget work session to remove the statue, which dates to 1917 and is just south of the U.S. 64 interchange with Benvenue Road.

The council’s action calls for putting the statue in storage in a safe place, pending further direction from the council.

Additionally on Monday evening, the council without dissent approved a resolution against racial injustice and declaring black lives matter.

Not long after the votes, the public input phase of Monday evening’s meeting began, with quite a number of supporters of the removal of the monument being whites and African Americans.

The council’s action on June 2 came about 48 hours after a peaceful protest at the monument, with the focus being on George Floyd, the African American who died on May 25 while in police custody in Minneapolis and whose death resulted in riots in cities nationwide.

One of the speakers on Monday evening who supported removing the monument was Mike Parker, who told the council, “We should not be celebrating or honoring the Confederacy. They lost.”

Parker added, “I am white. I’m not a person of color. I cannot stand here and tell you every single emotion and struggle others go through, but I do see the pain. I see the suffering. I hear it. I feel for them.”

Parker said the injustices going on are completely uncalled for in a nation where freedom is the main thing.

“How else will we right the wrongs of my ancestors?” he asked.

“I want my brothers and sisters, my friends, my neighbors, my family and my strangers that I haven’t even met yet, I want them to feel safe in this city like I do when I go walking or when I drive my car or when I go to the movie theaters,” Parker said.

“There are many things that need fixing in this country, even in this state and this city,” Parker said. “Snuffing the flame that is racism is among the top. Four hundred years of oppression does not disappear overnight when the stains are everywhere to be seen.”

Sam Whicker, who also is white, spoke of a longtime love of history yet of transitioning into the real world from high school and learning history is a lot different than what she and others were told.

Whicker said people think history is truth when history rarely is so and that the monument is not a matter of history anymore.

“This is separating us when we need to be building each other up and uniting and loving one another — and this is destroying us,” Whicker said.

A number of African Americans spoke in favor of removing the monument, including Anthony Pittman Jr., who told the council of standing for grandparents who were born in 1932, 1942 and 1945.

“I give you these dates in particular because the same things that are happening now happened then,” Pittman said. “And just as then, our cries are unseen, our pain is unheard and no one does anything.

“We are asking that you remove the monument because it is a constant reminder of what was pillaged upon our people — and that has been passed down from generation to generation,” Pittman said.

Pittman told the council of there being a belief in slavery never having ended, but just having shifted.

Pittman also told the council, “I pledge allegiance to the red, black and green, which means nothing to America, and to the oppression, for which is never seen, black nation, under God, be indivisible and not oppressive.”

Dr. Lisa Nelson, who is an African American, told the council the black community in Rocky Mount does not need another handout, another hand up, rehabilitation or prayers and thoughts.

“What it needs is economic independence of power,” Nelson said. “And that’s land ownership, business ownership and the ability to decide for yourself what is important to your community.

A small number of speakers made clear they wanted the monument to remain in place or wanted to know why there is such a rush to remove the statue.

Randy Adcox praised Councilman W.B. Bullock for casting the lone dissenting votes against removing the monument and also told the council, “I’m not a racist. I’m not a white supremacist. I have no desire to cause harm or discontent to anyone else.

“I’m just a simple man trying to preserve history,” Adcox said. “I realize my speaking to you tonight has no chance of changing anyone’s mind — and that’s OK.”

Adcox did tell the council of being disappointed and saddened after viewing the video of the June 2 budget work session.

“This body has no right, no moral authority and, frankly, no reason to remove this monument, other than a pursuit of a personal agenda by some members of this council,” Adcox said.

George Whitaker, who is white, told the council of having grown up along Falls Road, having been by the monument 9,950 times and never having thought of there having been anything other than a nice statue being at that location.

“Once that statue gets in storage, you know, I know, we all know what’s going to happen,” Whitaker said. “That’s where it’s going to stay.

“Why not move it one time? If that’s the ultimate plan to move it somewhere else, why not drop back, take your time, find out a suitable place to put it?” Whitaker said.