Log In Sign Up
You are the owner of this article.
Edit Article Add New Article
You have permission to edit this article.
Edit
News
Opinion
Sports
Features
Obits
Multimedia
Classifieds
e-Edition
Our Sites
Extras
Share This
1 of 6 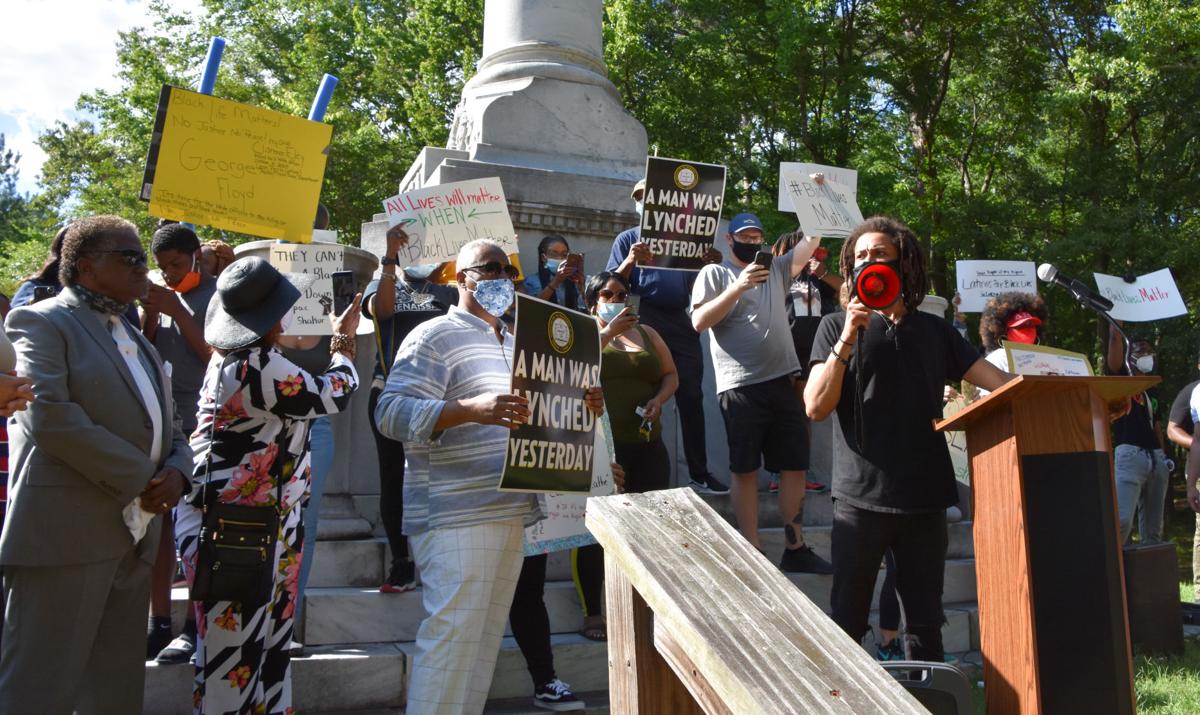 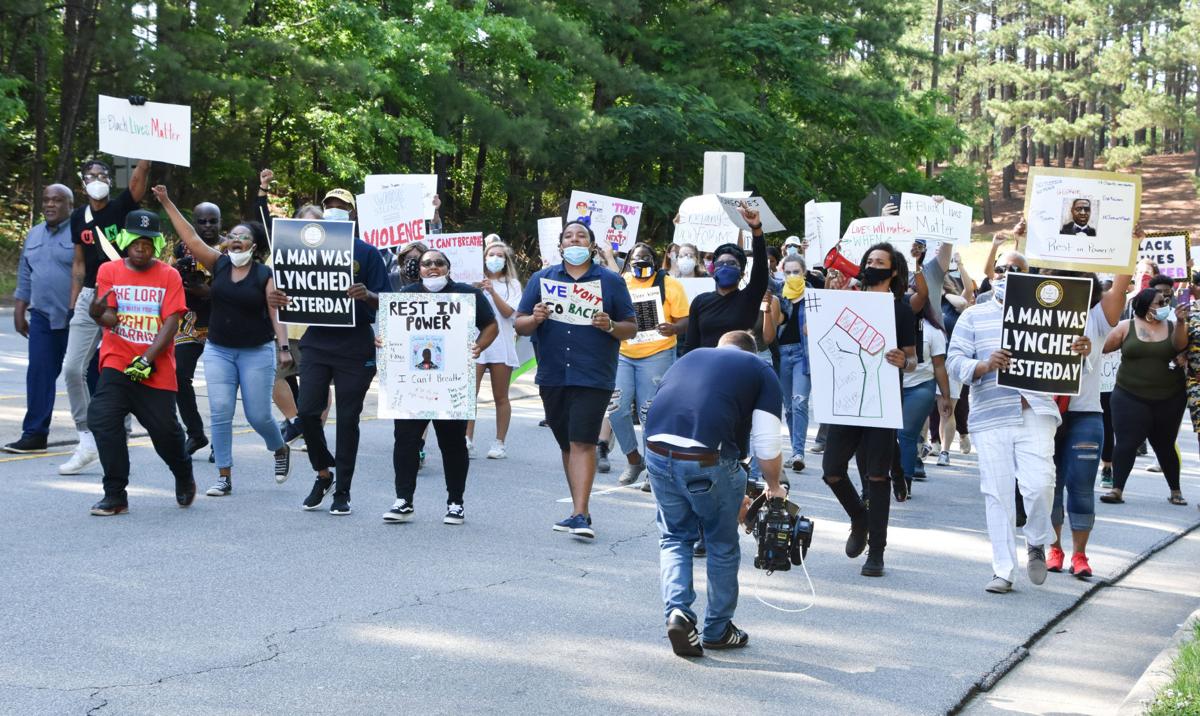 Protestors march down Falls Road on Sunday toward the Confederate monument. 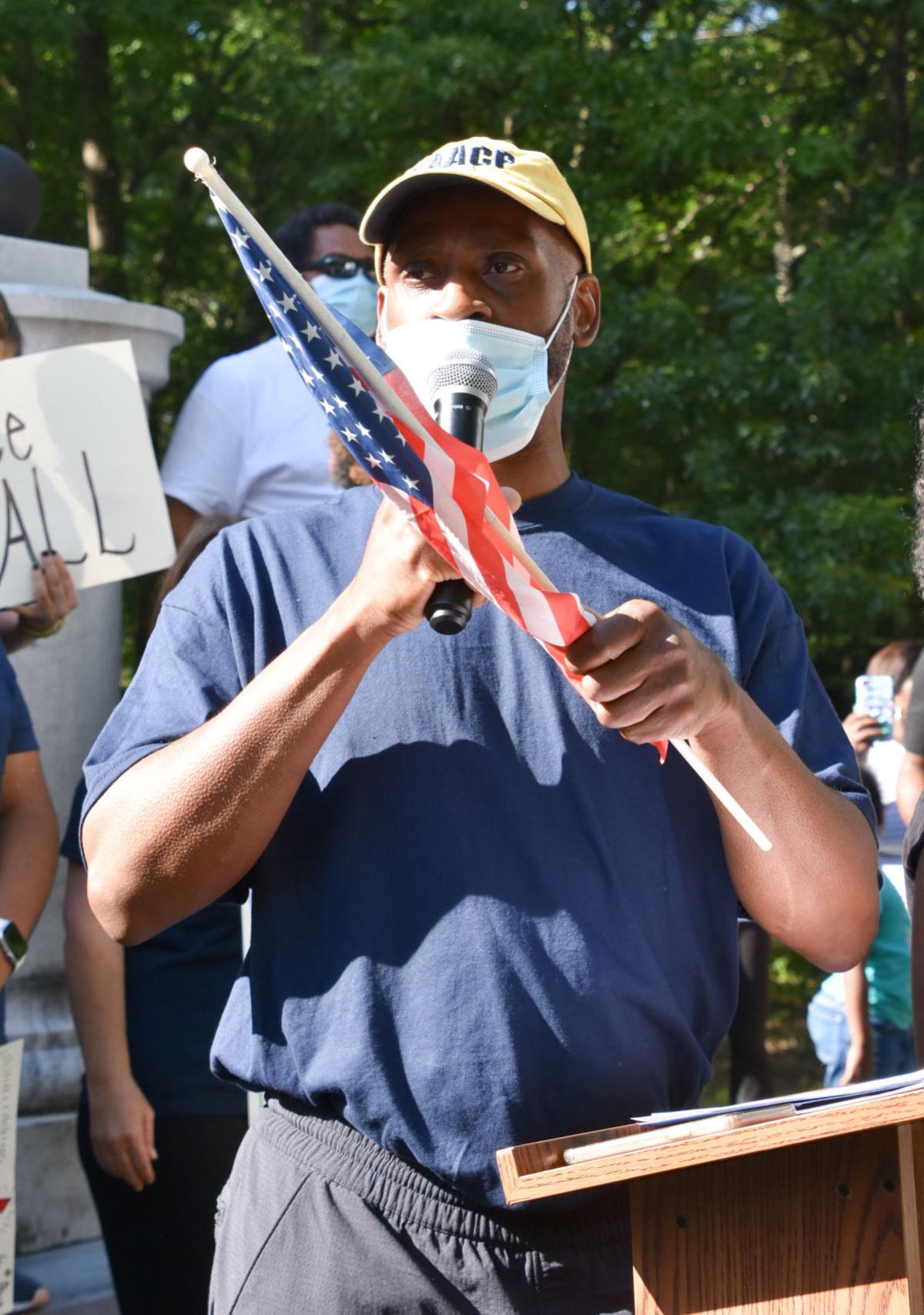 City Councilman Andre Knight speaks Sunday during a protest at the Confederate monument. 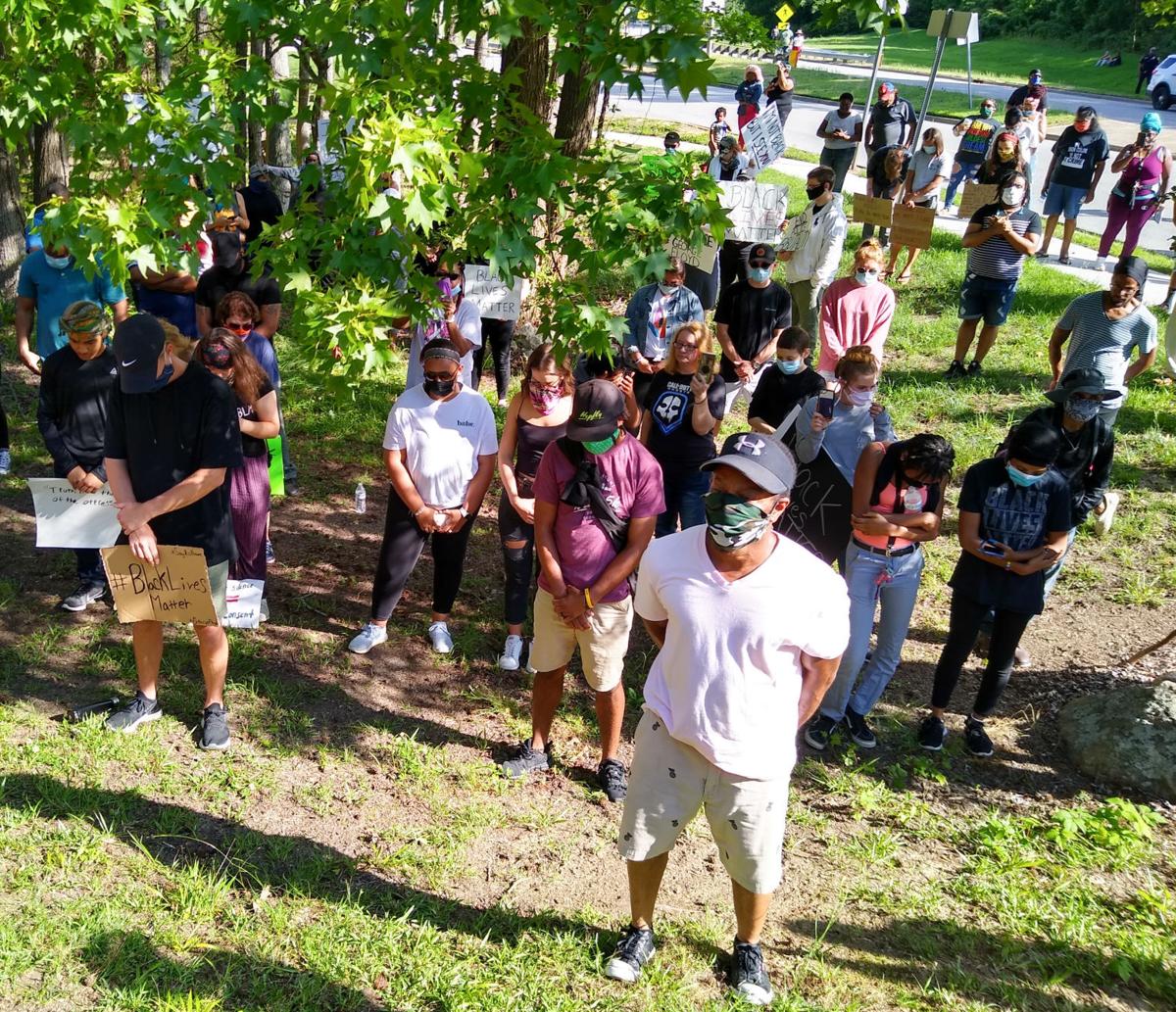 Attendees of a protest on Sunday of the death of George Floyd take a moment of silence for exactly the amount of time Floyd reportedly became unresponsive after a police officer kept him pinned down with a knee to his neck. 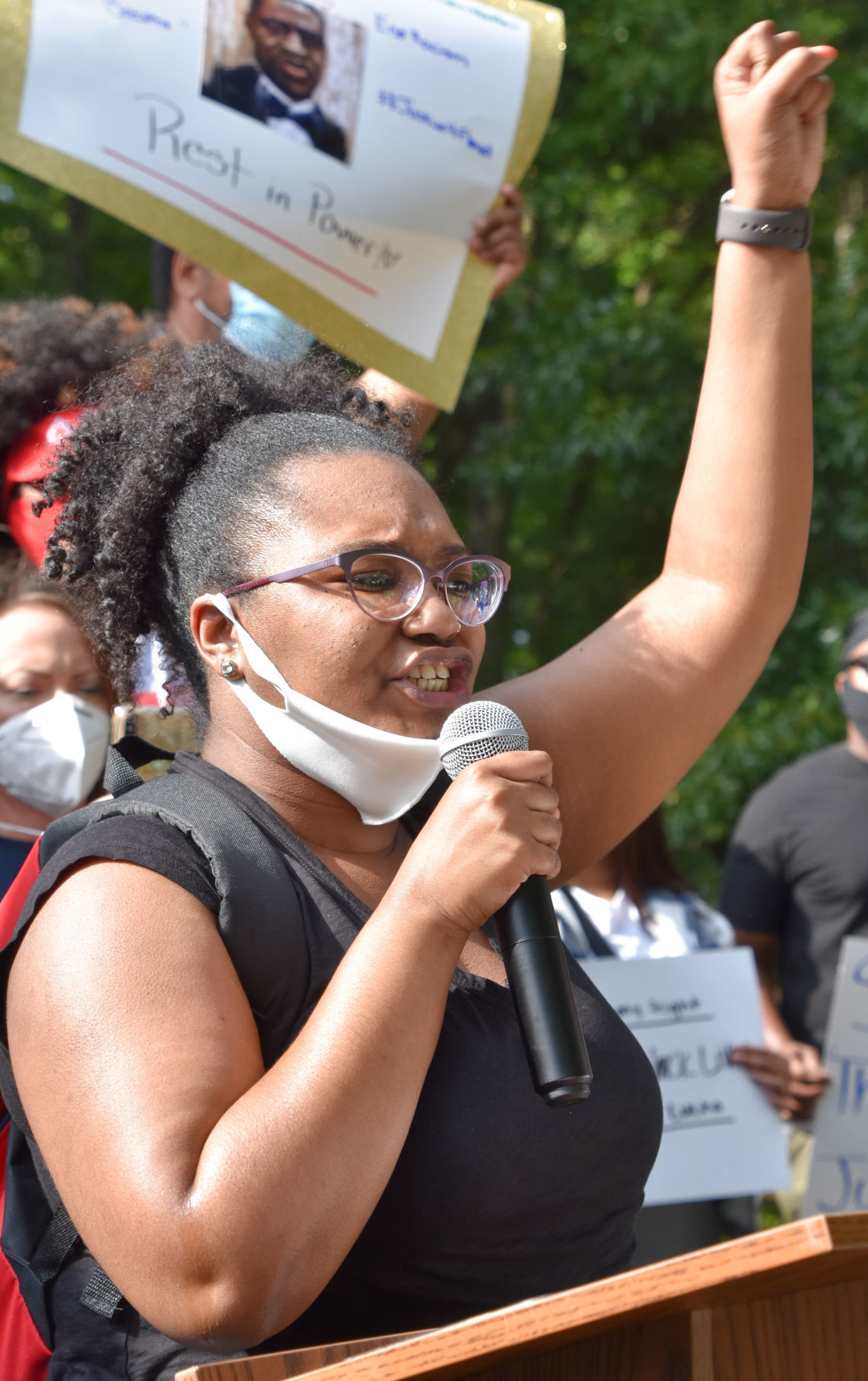 Sydney Meeks speaks Sunday during a protest at the Confederate monument. 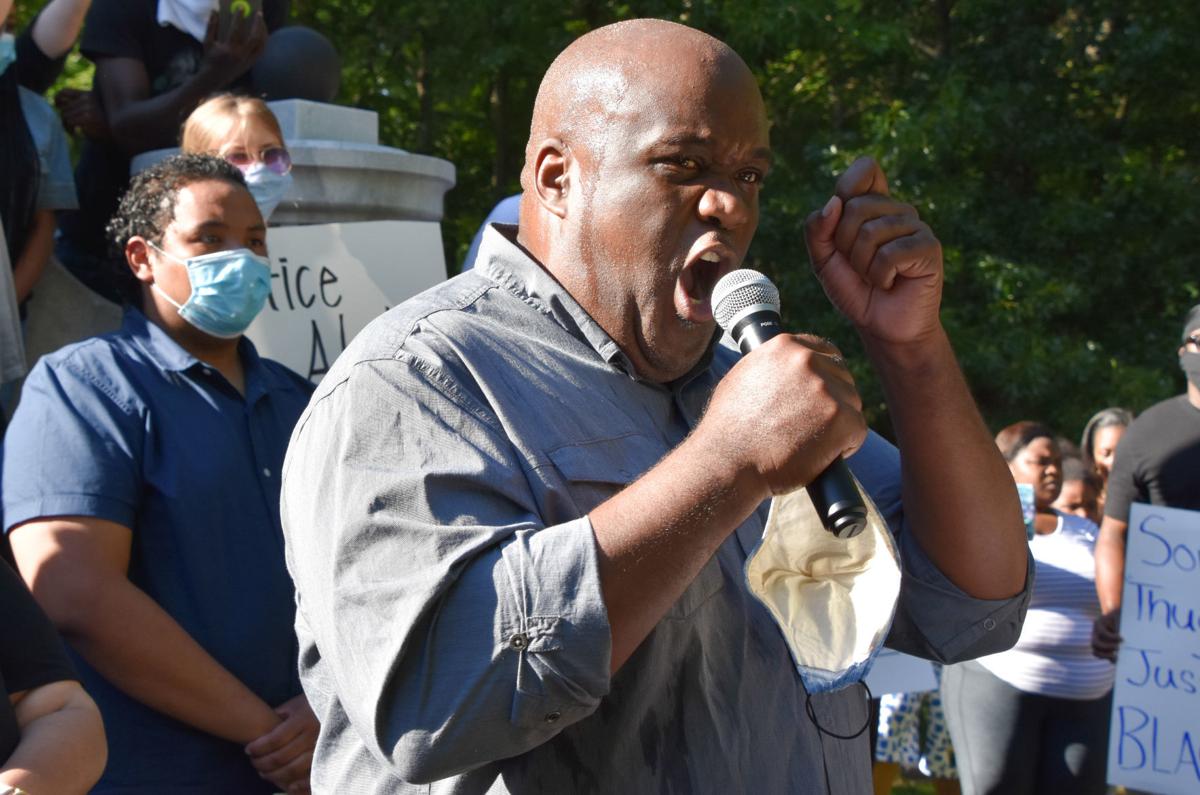 Nehemiah Smith speaks Sunday during a protest at the Confederate monument.

Protestors march down Falls Road on Sunday toward the Confederate monument.

City Councilman Andre Knight speaks Sunday during a protest at the Confederate monument.

Attendees of a protest on Sunday of the death of George Floyd take a moment of silence for exactly the amount of time Floyd reportedly became unresponsive after a police officer kept him pinned down with a knee to his neck.

Sydney Meeks speaks Sunday during a protest at the Confederate monument.

Nehemiah Smith speaks Sunday during a protest at the Confederate monument.

Optics was a key part of the strategy for a peaceful protest on Sunday afternoon in Rocky Mount in the aftermath of the death of George Floyd in Minnesota nearly a week ago.

The Confederate monument, which is on the south side of the interchange with U.S. 64 and Benvenue Road, was used as a gathering place so speakers could give their views about what happened to Floyd on May 25 after being taken into custody by police in Minneapolis — and about subsequent events.

Protests and riots erupted in major cities throughout the nation after video emerged showing an officer, Derek Chauvin, who is white, using one of his knees to keep Floyd, an African-American, pinned down by the neck, with Floyd saying, “I can’t breathe.”

And Chauvin’s wife has stated intentions to seek a divorce from him.

During the protest on Sunday, the tone was quickly set when one of the organizers, Cooper Blackwell, an activist and son of City Councilman Reuben Blackwell, began leading chants of, “No justice, no peace! No racist police!”

One of the most emotional moments came after another organizer, Sydney Meeks, stepped to the podium.

Meeks said of the death of Floyd, “It was, in effect, a modern-day lynching, as those police officers served as judge, jury and executioner on an unarmed, non-violent, handcuffed black man.”

Meeks said although the four officers were fired and Chauvin has been arrested and charged with murdering Floyd, “His family has yet to receive complete justice for the tragic loss they now face.”

Meeks said she believes the remaining three officers must be charged with murder and tried.

Meeks noted she and fellow organizers received much opposition for the choice of the site for the protest on Sunday, but she said, “We are at this monument because this monument of (the) Confederacy glorifies and celebrates the pain and suffering that we have been feeling for 400 years.”

Meeks said she believes that the nation is in a state of emergency and that what happened to Floyd is not an isolated incident.

“We continue to have the knees of racism, systematic oppression and white supremacy on our necks,” Meeks said.

Meeks quoted activist Tamika Mallory, who said, “We are not responsible for the mental illness that has been inflicted upon our people by the American government, institutions and those people who are in positions of power.”

The protest included a moment of silence for two minutes and 53 seconds in memory of Floyd.

Chauvin had a knee on Floyd’s neck for eight minutes and 46 seconds, with two minutes and 53 seconds of that time being after Floyd became unresponsive.

Cooper Blackwell made clear while the protest on Sunday was a program of the youth, the microphone was going to be handed to the elders.

One of them was activist Nehemiah Smith, who often speaks during the public input phase of City Council meetings.

During the protest on Sunday, Smith called on whites to stand up and join in the effort to stop racism.

Smith particularly drew strong responses from attendees when he focused on President Donald Trump, whom he said he believes continues to stoke the fires of racism.

“And we must at all costs tell him that we will not have it,” Smith said. “You’ve got yet a few more months and you’re out of there, jack. See you later, because if you can’t be for everybody, then we don’t need you to be for anybody.”

Smith called for attendees to both fill out the Census 2020 forms and to vote.

Smith particularly focused on those who are going to say, “My vote doesn’t count” by telling them if they do not vote for any other reason, “Guess what? There were some George Floyds before George Floyd who fought that you might have the right to vote.”

Smith told the attendees, “Do what you have to do to make a difference in your community. And what will happen in the end is that God will bless us and he will see us through.”

City Councilman Andre Knight, who is the local president of the National Association for the Advancement of Colored People, also spoke.

Knight told attendees, “We will respect our elders. I stand on the shoulders of those who were killed, murdered, hung from trees like strange fruit — and we shall be respected.”

Knight during his remarks spoke in part about the late Fannie Lou Hamer, who was a civil rights activist from the Mississippi Delta agricultural region.

In 1964, Hamer became a center of major attention as she tried to end the tradition at that time of all-white Mississippi delegations being seated at national Democratic Party conventions.

Knight pulled out a small American flag to make the point of Hamer having once said, “The flag is drenched with our blood.”

Knight also said he believes young people across the nation want to be respected, “’as we know that this country was built on the backs of black people.’”

“’And if we don’t have it, you ain’t going to have it, either, because we are going to tear it up’,” Knight said.

“That’s what the young people are saying — and people ought to understand that,” Knight said.

And Knight said, “The youth was a very important part of the civil rights movement. The youth will remain a necessary voice for social change.”

The Rocky Mount Black Action Committee organized a Black Lives Matter rally on May 31 at the Confederate monument on Falls Road.