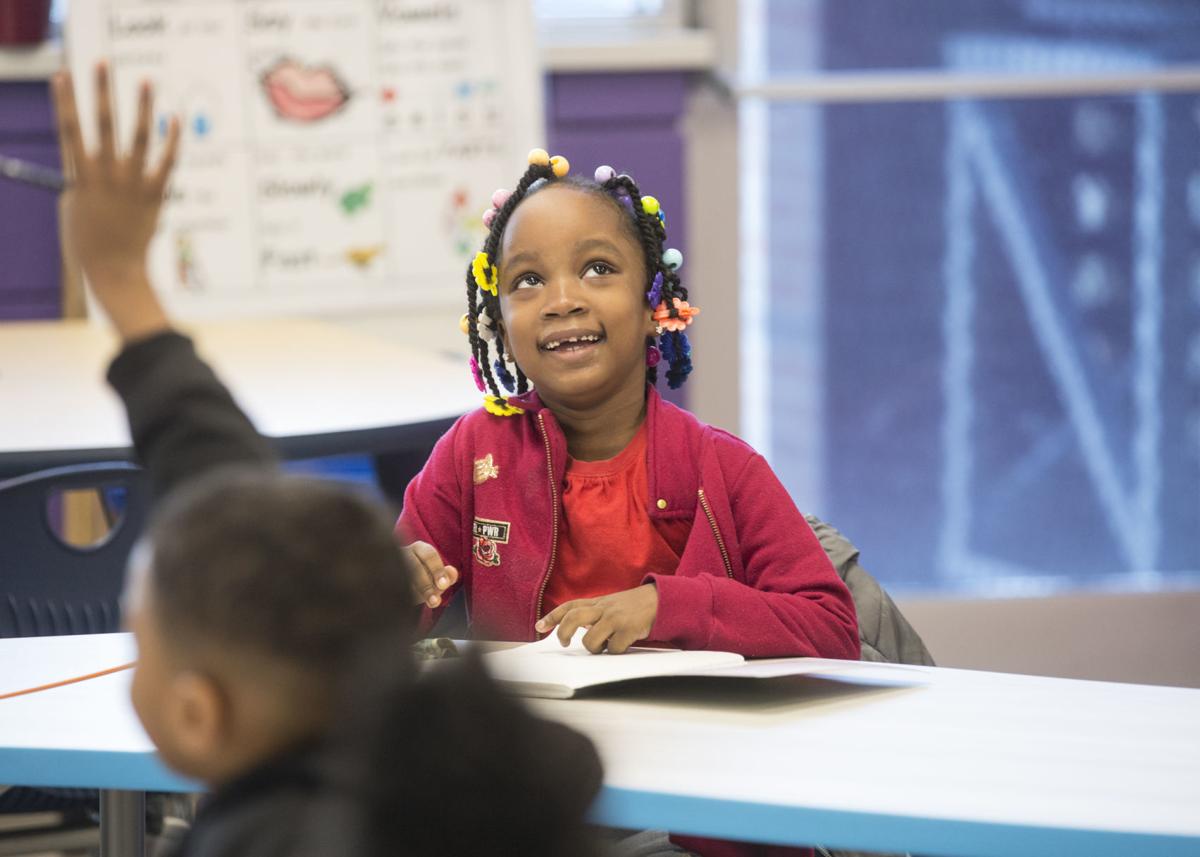 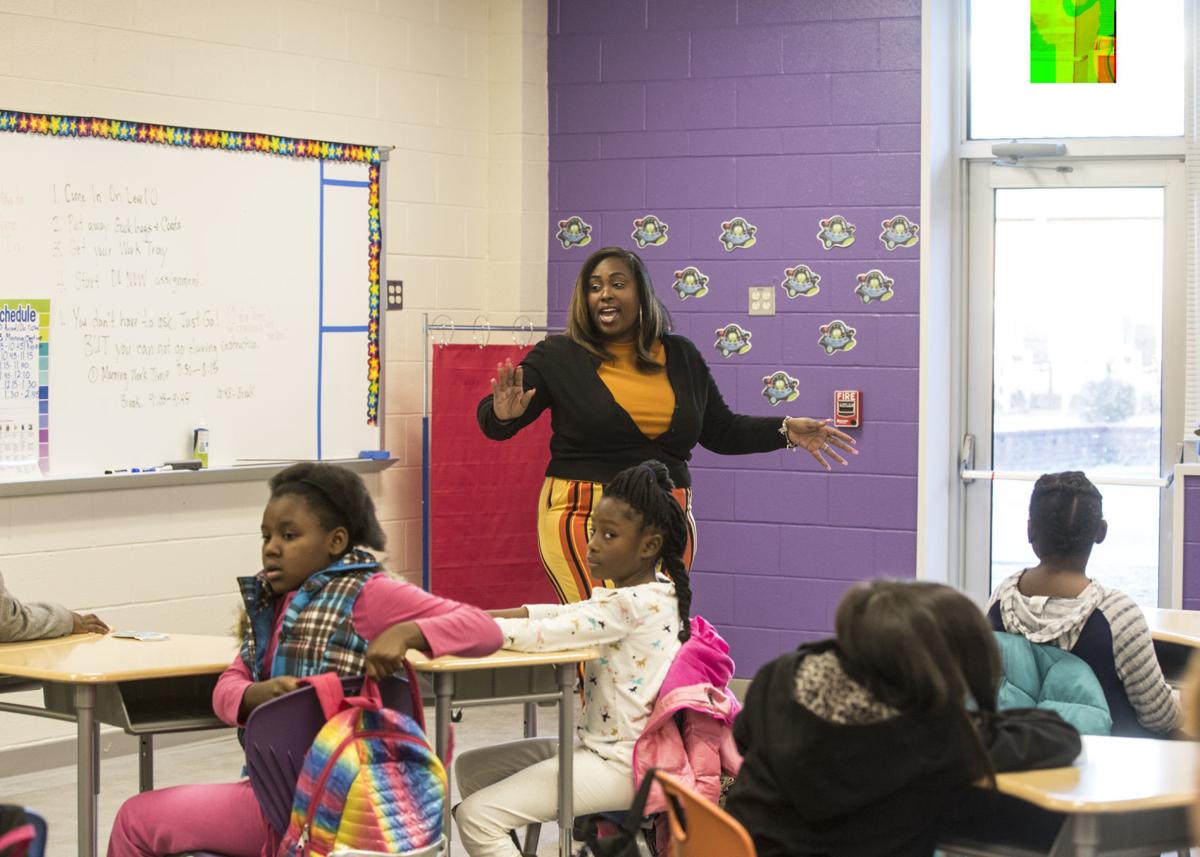 Kaiesha Whitaker talks to a third-grade class on Thursday at Princeville Elementary School in Princeville.

Kaiesha Whitaker talks to a third-grade class on Thursday at Princeville Elementary School in Princeville.

PRINCEVILLE — The return to Princeville Elementary School on Thursday was a mix of nervous energy and anxious excitement — for both staff and students — as the facility reopened following a $6 million-plus makeover after being damaged by Hurricane Matthew more than three years ago.

Keep in mind that a large number of the school’s current students were in the building for the first time, as pre-K through second grade students always had attended school at the Bridgers Building, located on the eastern end of Tarboro’s Town Common.

That is why Yolanda Hagans was so excited that the school was ready for classes.

After Hagans and her daughter, Yakirah, stopped to receive a hug from Principal Annette Walker as they arrived at Wednesday’s open house, she looked around the entrance to the learning commons with a big smile on her face.

“I went here,” she said proudly. “(I) lived right over there (pointing across Walston Street) with my grandmother and grandfather. I’ve got two older girls who walked (across the street) to school and now, Yakirah.”

Hagans’ comments mirrored those of Walker from an earlier Telegram interview in which she said she felt the biggest loss while the school remained closed was the connection with the community.

“It will be good to have that again,” she said.

That reconnection was evidenced time and again at both the open house and first day of classes, as “Welcome Homes” reverberated up and down the hallways as teachers greeted both students and parents with hugs.

The “new” school is light years away from the old one, technology-wise, and from the other schools in the district.

At Princeville Elementary, students will begin their STEM (science, technology, engineering and mathematics) education in kindergarten and follow an accelerated path as they head toward fifth grade.

In addition, the lab is equipped with a 3D printer where students will send projects after they learn coding.

“We want them to be hands-on and know how to do things,” Edgecombe County Public Schools Technology Director Matthew Mayo said. “We want them to learn that it is OK to fail ... to have something turn out differently than you expected. That helps them learn and grow.”

School board Chairwoman Evelyn Wilson, who toured the building, said the district purposely had scheduled the return to classes for two days after the rest of the district.

“We wanted the staff to have the time to get in and make sure everything was ready,” she said.

Wilson said she wondered about what people, who several years ago questioned whether the school should reopen, would think now.

“My thought is that most of them have probably never been to the school and had no connection (to the community),” she said. “We had great discussions about this and we wanted to do it the very best we could, because this is going to be the model ... not just for Edgecombe County, but other districts as well.”

What once was the library and grew into the media center has evolved again and now is the learning commons.

At first glance, it still looks like a library, but it is one on steroids.

“It is a library first, then a blend of technology,” Mayo said, noting flexible tables that can be moved as the teacher needs, contemporary seating and curved bookshelves on casters.

The flexible tables allow for seating students so as to allow for conversation.

“We don’t want them always looking down, but talking to each other about what they are reading,” Mayo said. “We want to hook them on reading.”

Mayo also noted there are charging stations for students to use to re-energize their electronic devices. He said the Princeville results will become the model for the rest of the district.

The classrooms also are technology driven, with large, flatscreen monitors mounted on the wall and that same high-tech furniture as in the learning commons so that teachers can redefine their classrooms as needed.

Both Wilson and Mayo talked about the journey to get from October 2016 to Thursday.

Independently, both said the effort is to change the mindset of those who think things cannot be accomplished because it is Edgecombe County to one of, “They’re doing some really neat things in Edgecombe County.”

Wilson said the board knew they would have but one shot to get the most bang for their buck, and they took it.

“We talked, we planned, we prayed ... and at times, we struggled with what to do and how to do it,” she said. “In the end, I think it looks great and we’re going to move forward.”