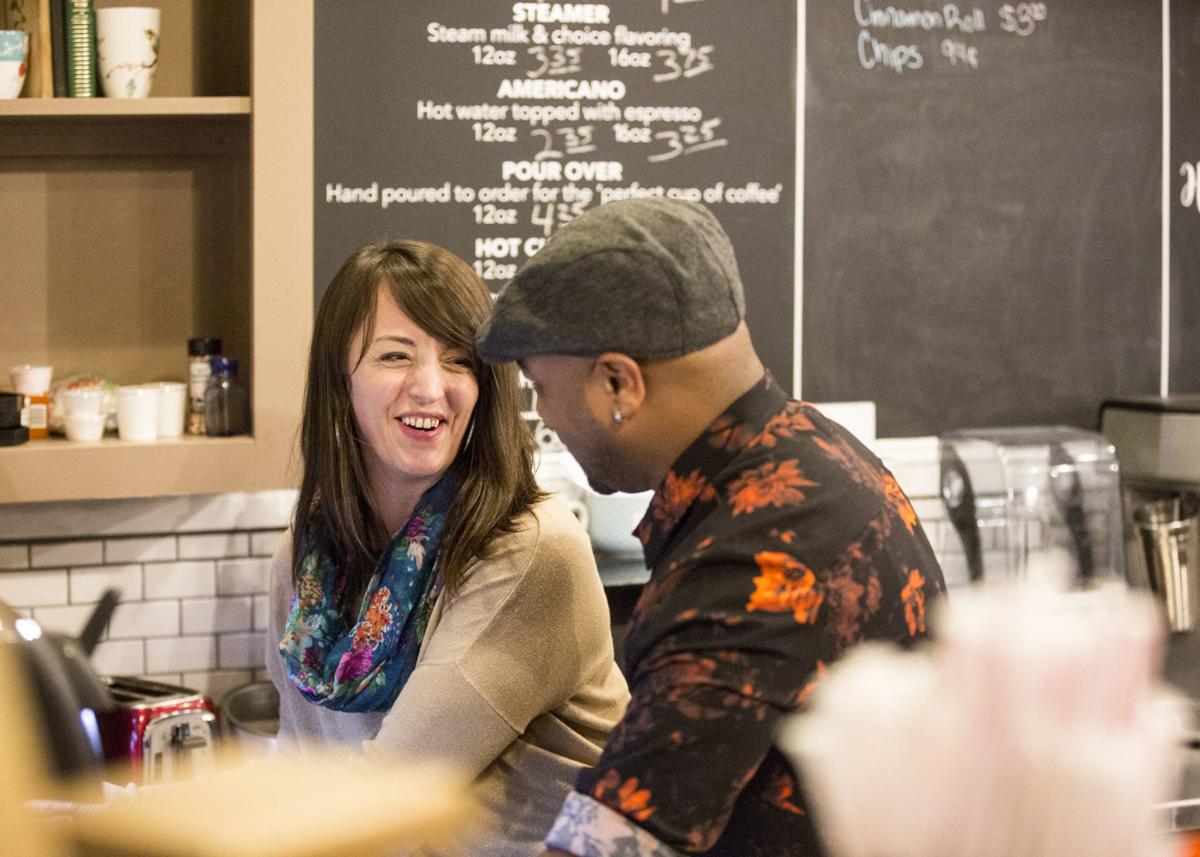 Charity Ruiter, left, shows Marcus Anderson, the new owner of Trax Coffee Bar, how to make a drink Tuesday at Trax Coffee Bar. Below, Anderson stands in front of the coffee bar. 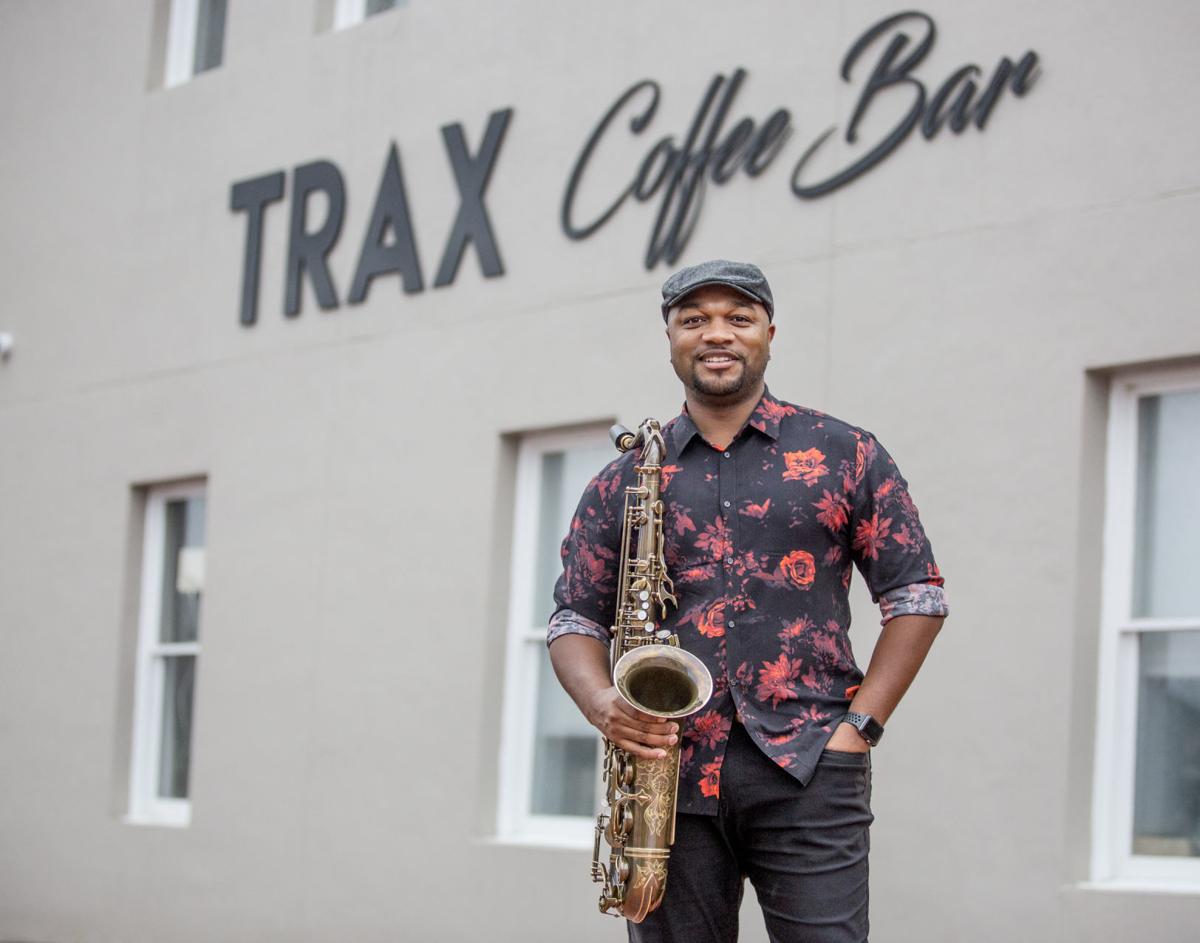 Marcus Anderson is the new owner of Trax Coffee Bar.

Charity Ruiter, left, shows Marcus Anderson, the new owner of Trax Coffee Bar, how to make a drink Tuesday at Trax Coffee Bar. Below, Anderson stands in front of the coffee bar.

Marcus Anderson is the new owner of Trax Coffee Bar.

A popular downtown business has a jazz musician and his business manager as new owners and operators.

Anderson, who spoke with the Telegram, brought his saxophone and gave a brief impromptu performance just outside Trax.

The scene quickly turned into something one would immediately see and hear at the iconic Jackson Square in New Orleans.

Anderson originally is from Spartanburg, S.C., and presently lives in Raleigh.

Anderson said he became a lover of coffee in roughly the 2013-14 timeframe and began writing songs about his coffee-drinking experiences.

“So I thought about, ‘What could I do to package this music with this idea of coffee?’ So I started researching coffee,” Anderson said.

Anderson said he ended up partnering with Dilworth Coffee in Raleigh and creating a brand, called “AND Coffee,” which is a play on the first three letters of his last name.

Asked why he became a coffee drinker, he said, with a smile and a laugh, “I was on energy drinks. And I needed to get off it because energy drinks were not healthy at all.”

He said, “Whenever I need something, I drink a good cup of Joe.”

As for how he became interested in Trax and why, he said, “Well, I’ve always kind of wanted to own my own coffee shop.”

He said Willis had been researching coffee shops and that he and Willis have friends in the coffee business who told them about Trax being available.

“I love everything about Trax Coffee. I just kind of want to take the brand and make it a little bit more well known, use my brand as an artist and a musician to bring a little bit more attention to not just Trax Coffee, but also Rocky Mount because it’s a great place to be,” Anderson said.

Anderson said he wants to have musicians play in Trax and plans on performing there himself.

“Oh yeah, it’s just up the street,” Anderson said of making the drive from the Raleigh-Durham area. “That’s an album playing — put it in a car and at the end of the album, I’m here.”

Willis, 52, of Durham, also is an interesting story.

Willis told the Telegram of having been “an extreme commuter” because he lived in an apartment in the Bluff City on the weekdays and traveled by plane back to the Raleigh-Durham area to spend weekends.

Willis’ career in aviation ended because he suffered a massive stroke, but he had been in artist management, so he focused on the latter.

Additionally, he said he wanted to keep his brain active as he recovered, so he was in the food service business for a time, including having been a partner in a chicken eatery in Southaven, Miss., which adjoins Memphis.

“So obviously I know how to run businesses. That’s my forte. And I wanted to use his notoriety to make it popular,” he said.

Willis also spoke of hopes of eventually franchising out.

At Trax, Charity Ruiter has been the manager since March and has three baristas working for her.

Ruiter told the Telegram she plans to stick with Anderson and Willis, saying, “Well, music is my passion as well. So I’m really excited to have a musician coming in here.”

Ruiter, 38, originally is from near Youngstown, Ohio, and presently lives in Rocky Mount. Ruiter has previous experience working in the Twin Counties area as a bartender and a waitress.

Landlord Ben Braddock told the Telegram the previous owners and operators moved on due to personal reasons.

Braddock, 39, spoke of the importance to him and his team from Day One of having a convening anchor at the entrance to Station Square.

The complex is across Church Street from City Hall and the police station and is within about five blocks of downtown business.

“And to me, a coffee shop is a convening space and an anchor,” Braddock said. “And so it was part of my original vision to see a coffee shop come in here.”

Braddock told of the area just outside Trax having been a flower bed before being replaced with a patio to provide extra space for outdoor seating.

“So for us, we have been looking for and waiting for the right operator/owner for Trax who would really make it all that it can be,” Braddock said. “And I feel like Marcus brings his talents and energy and creativity to this space.”