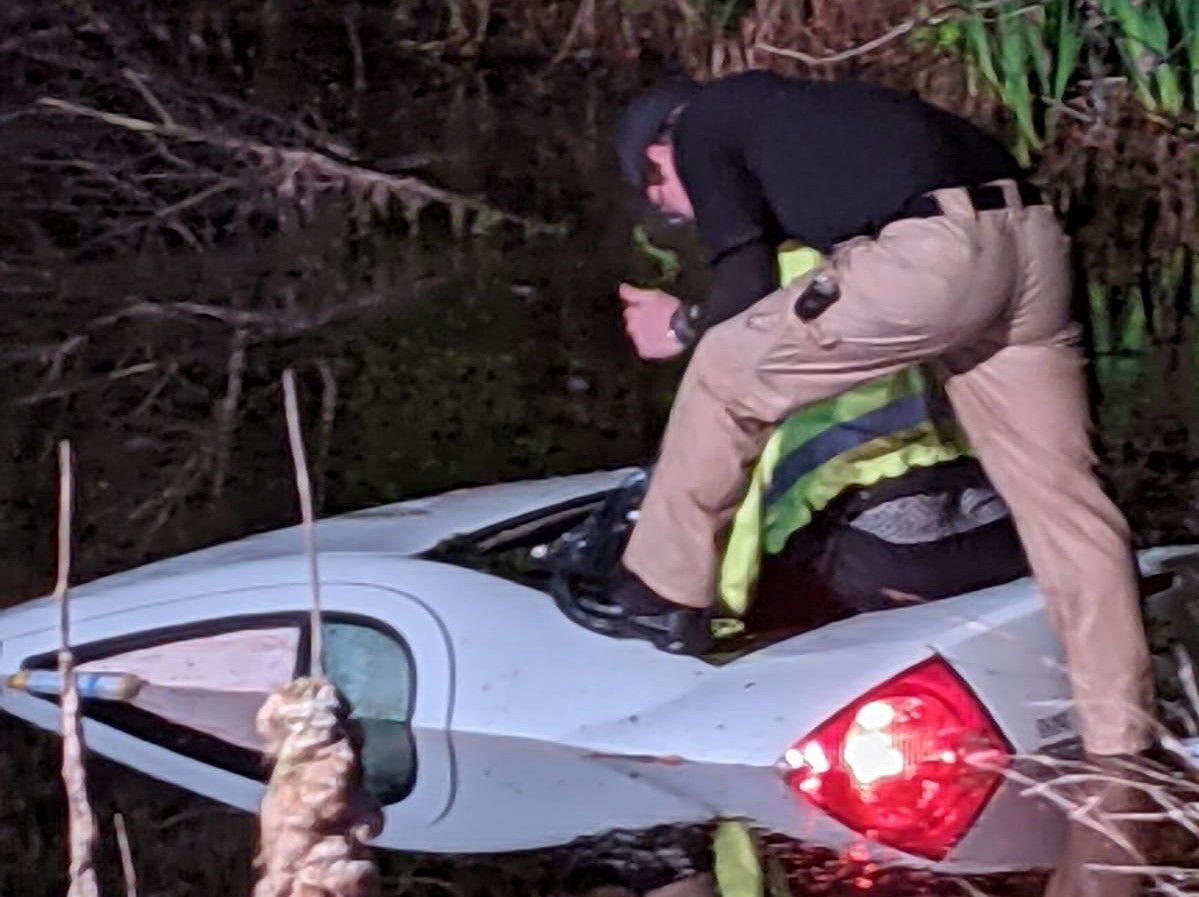 Deputy Andrew Hughes helps free a Nash County woman just after midnight Tuesday whose car crashed into a canal on Monday along U.S. 64 between State Road 1229 and the Alligator River Bridge in Tyrrell County. 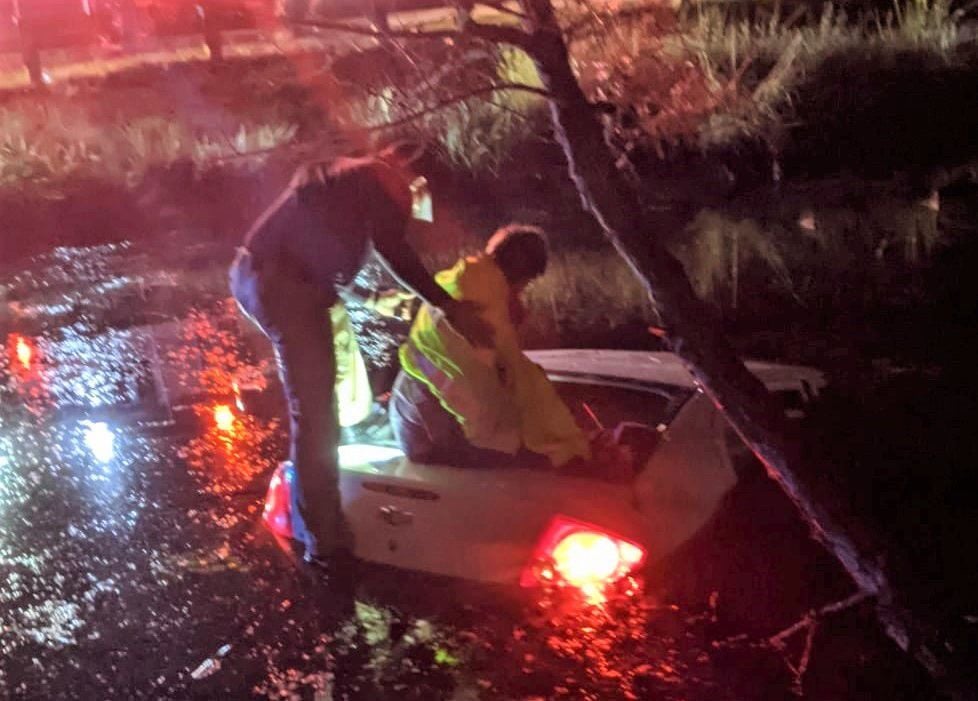 Tammy Blythe is helped from her submerged vehicle just after midnight Tuesday along U.S. 64 between State Road 1229 and the Alligator River Bridge in Tyrrell County.

Deputy Andrew Hughes helps free a Nash County woman just after midnight Tuesday whose car crashed into a canal on Monday along U.S. 64 between State Road 1229 and the Alligator River Bridge in Tyrrell County.

Tammy Blythe is helped from her submerged vehicle just after midnight Tuesday along U.S. 64 between State Road 1229 and the Alligator River Bridge in Tyrrell County.

Tammy Blythe left her home on Swift Creek Road about noon Monday and headed toward her destination in Kill Devil Hills. When she did not arrive on time, her family became worried and contacted the Nash County Sheriff’s Office.

Chief Deputy Brandon Medina said when his office was notified about 10 p.m. about the overdue motorist, they began trying to track down the last location of her cell phone. With the help of the Nash County 911 Communications Center and Verizon, the sheriff’s office was able to plot a general location for her cell phone.

“All we did was figure out where her phone was and notify the Tyrrell County Sheriff’s Office. We made a lot of calls, but the communications center and Verizon helped us a lot. The Tyrrell County sheriff’s deputies are the real heroes in this amazing story,” Medina said Thursday in an interview.

According to information provided by the Tyrrell County Sheriff’s Office, Deputy Andrew Hughes, who has served about two years with the sheriff’s office, and Deputy Melissa Spence, who has served about 14 years, were alerted to the report of the overdue motorist or missing person from Nash County who possibly could have been broken down along U.S. 64. The deputies began searching the area for Blythe’s vehicle.

“They had already searched the area once and were searching for a second time when they finally spotted a break on the guardrail that separates the highway from the canal,” Sgt. Frank Mitchell of the Tyrrell County Sheriff’s Office said Thursday in an interview. “That is a long, dark stretch of the highway. On one side, we have these canals that are 5 to 6 feet deep and always full of water. They also have snakes and turtles and other animals as well.”

The deputies took a closer look and spotted the back end of the missing vehicle protruding from the water alongside U.S. 64 between State Road 1229 and the Alligator River Bridge in Tyrrell County.

“With no concern for his own personal safety, Deputy Hughes jumped into the water to find that the driver was huddled in a small air pocket in the back window of the car. The deputies broke the back window out and rescued the driver from certain death,” the Tyrrell County Sheriff’s Office said in a Facebook post.

With the help of volunteers from the Tyrrell County Fire Department and Washington Tyrrell County EMS, Blythe was rescued and transported to a nearby hospital for evaluation.

Mitchell said the vehicle sunk beneath the water soon after Blythe was pulled from it.

Medina said Blythe appears to have made it only about two hours on the road before the incident occurred. He estimates that she spent roughly 10 hours in that situation before she was rescued shortly after midnight Tuesday morning.

Blythe reportedly is now at home in Nash County with no apparent injuries from her ordeal but with a story of an adventure she is likely never to forget. The concerns of her family and friends and the combined efforts of multiple agencies resulted in a happy ending to what could have been a tragic tale.