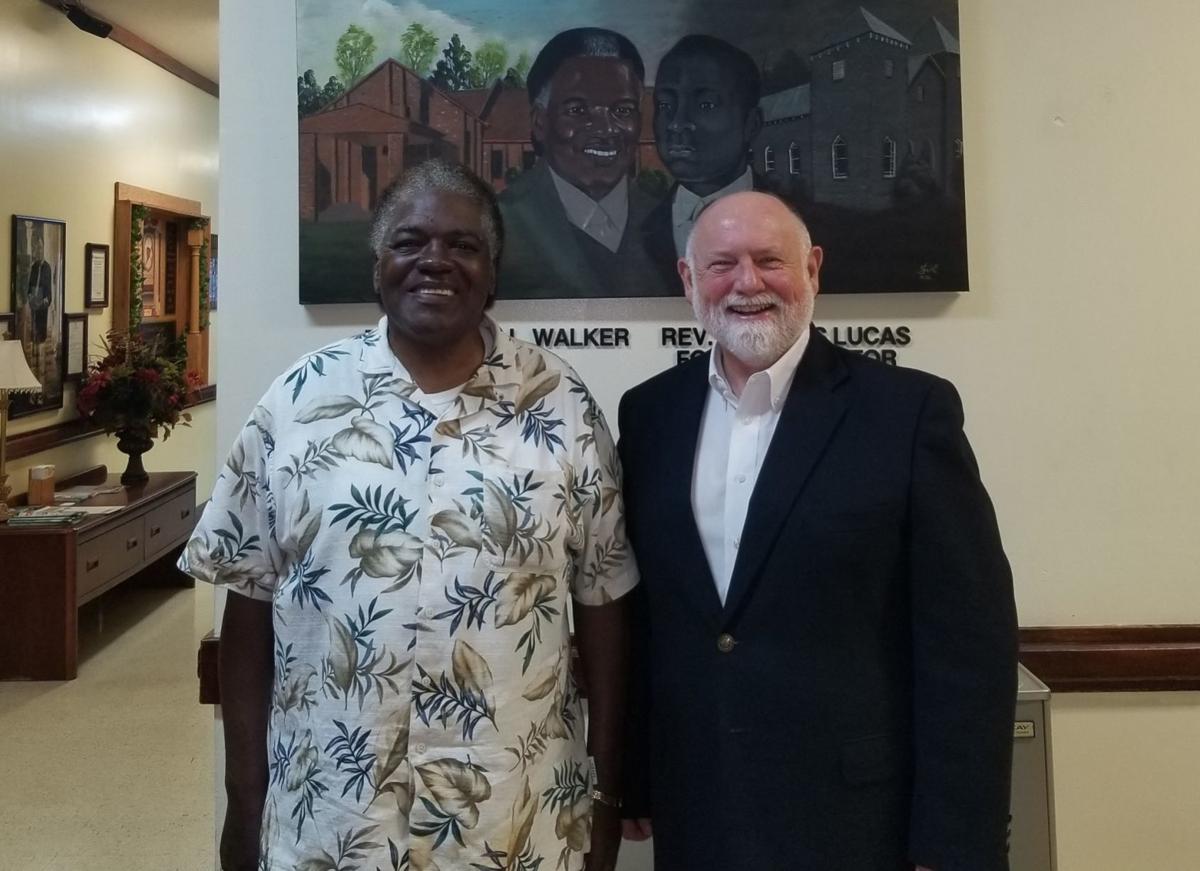 The Rev. Thomas Walker, left, and the Rev. Michael Cloer issued a joint statement Friday expressing support for the relocation of the Confederate monument and urging a more aggressive fight against racism. 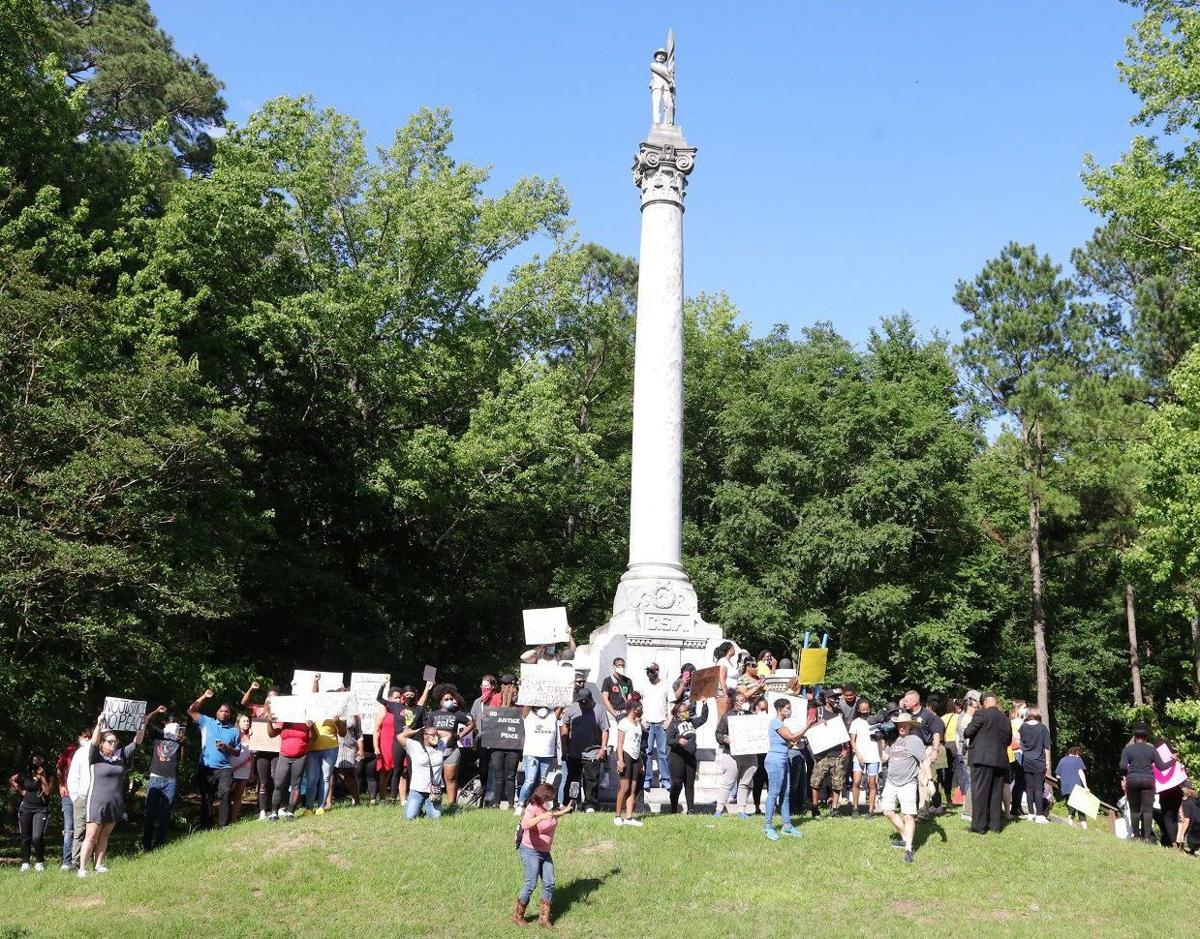 Protestors stage a Black Lives Matter rally on May 31 in front of the Confederate monument.

The Rev. Thomas Walker, left, and the Rev. Michael Cloer issued a joint statement Friday expressing support for the relocation of the Confederate monument and urging a more aggressive fight against racism.

Protestors stage a Black Lives Matter rally on May 31 in front of the Confederate monument.

The leaders of two of the most influential churches in the Rocky Mount community — one predominately black and one predominately white — have come together to issue a joint statement in support of moving the Confederate monument in front of Battle Park.

“As followers of the Lord Jesus Christ, the final authority for our beliefs and behavior must be Holy Scriptures,” the statement began.

“Recent events that have captured international attention serve as a reminder that our nation is in a dark place. The human heart has unspeakable darkness inside of it. Too many of us have forgotten how dark it is. We cannot trust the human heart to solve the problems of our communities. As our nation secularizes, many trust in the human heart to establish truth, govern law and provide liberty. The human heart is too dark to be our place of confidence,” the statement continued.

The statement addressed the need for human institutions, like governments, to “challenge the darkness instead of being neutral or even endorsing it.”

“Governments should follow God’s moral law: ‘Righteousness exalts a nation, but sin is reproach to any people’ as is stated in Proverbs 14:34. Governments should condemn the evildoer and reward those who do good.”

The statement then addresses the issue of racism.

“America’s deepest and darkest wound from our inception has been racism. The nation has slowly taken steps to attempt to repent of the hideous sin. These attempts have been deficient or minimal more often than aggressive. Oppression continued unabated by our society and was legitimatized long after emancipation through segregation, extreme injustice and outright hatred,” the joint statement read.

That is where the church comes in, the statement said.

“The inability of society to correct racism has reminded us that the church is the institution that must take the lead in reconciliation. The church has the solution for hate — the love of Jesus Christ. In Matthew 5:13-14, Jesus told His followers, ‘You are the light of the world. You are the salt of the earth.’ The only deterrent to the darkness and the decay of racism, prejudice and injustice is the Church,” the document stated.

The statement then addressed the recent vote by the Rocky Mount City Count concerning the Confederate monument.

“Signs of progress appear to be a reality in light of the recent Rocky Mount City Council’s vote 6-1 in favor of the removal of the Confederate monument at Battle Park. As long-tenured pastors, Christian brothers and taxpayers in this city, we stand in support of this vote. We applaud this council for their efforts to right a wrong. We pray for the council as it decides how to best utilize the existing park property,” the statement read.

The joint statement also addressed concerns of people who see this move as an affront to history.

“By no means are we seeking to erase history. It is imperative that we understand history; the foundations of our country and our faith traditions are built on that. But it is also important that we understand historical figures and events in their full context. It was not until 1905 — half a century after the Civil War and in the throes of the implementation of Jim Crow laws across the South — that the statue of this Confederate soldier was placed in what was known then as Riverside Park,” the statement said.

“This monument does not represent the principles of who we are as people of faith, or what our nation was founded upon: ‘We hold these truths to be self-evident, that all men are created equal, that they are endowed by their Creator with certain unalienable Rights, that among these are Life, Liberty and the pursuit of Happiness,’” the statement concluded.

In an interview, the two pastors discussed why they felt the joint statement is necessary at this time.

“This is not a political or even a racial issue,” Cloer said. “This is a humane issue. We thought we should issue this statement now because of what is going on around the country. There has not really been anything publicly said in Rocky Mount from the Christian community that encompasses both sides of it.”

Walker has 50 years of experience serving in the ministry in the Rocky Mount community. He agrees that the time has come for the two Christian communities to come together.

“I agree that it is a humane issue,” Walker said. “And we need to continue to try to lift up the whole moral piece of that. God himself said, ‘Let judgment run down as waters, and righteousness as a mighty stream.’ When we do things, if we don’t take into consideration the pain that it creates in humanity, ultimately it will cause dissent in the community.”

Both Walker and Cloer praised each other’s efforts. Cloer said that Walker has been instrumental in making Rocky Mount a more peaceful and positive community.

“And some of us have come on much later. But the salt of the earth has held back the corruption. Because of Dr. Walker’s work here, the gospel has been preached among the people in the community for years, and Rocky Mount has a different climate about it than some of these other communities that have reacted more violently,” Cloer said.

Walker said that Cloer is a man of courage and character.

“It is so encouraging to us that Dr. Cloer is standing with us. We have found him to be a man of courage and deep spiritual values. This statement is a very important part of history. Dr. Martin Luther King spoke of the tragedy of silence — so, it is so important that we speak out. We are the light of the world, and it is incumbent upon us as Christians to respond,” Walker said.