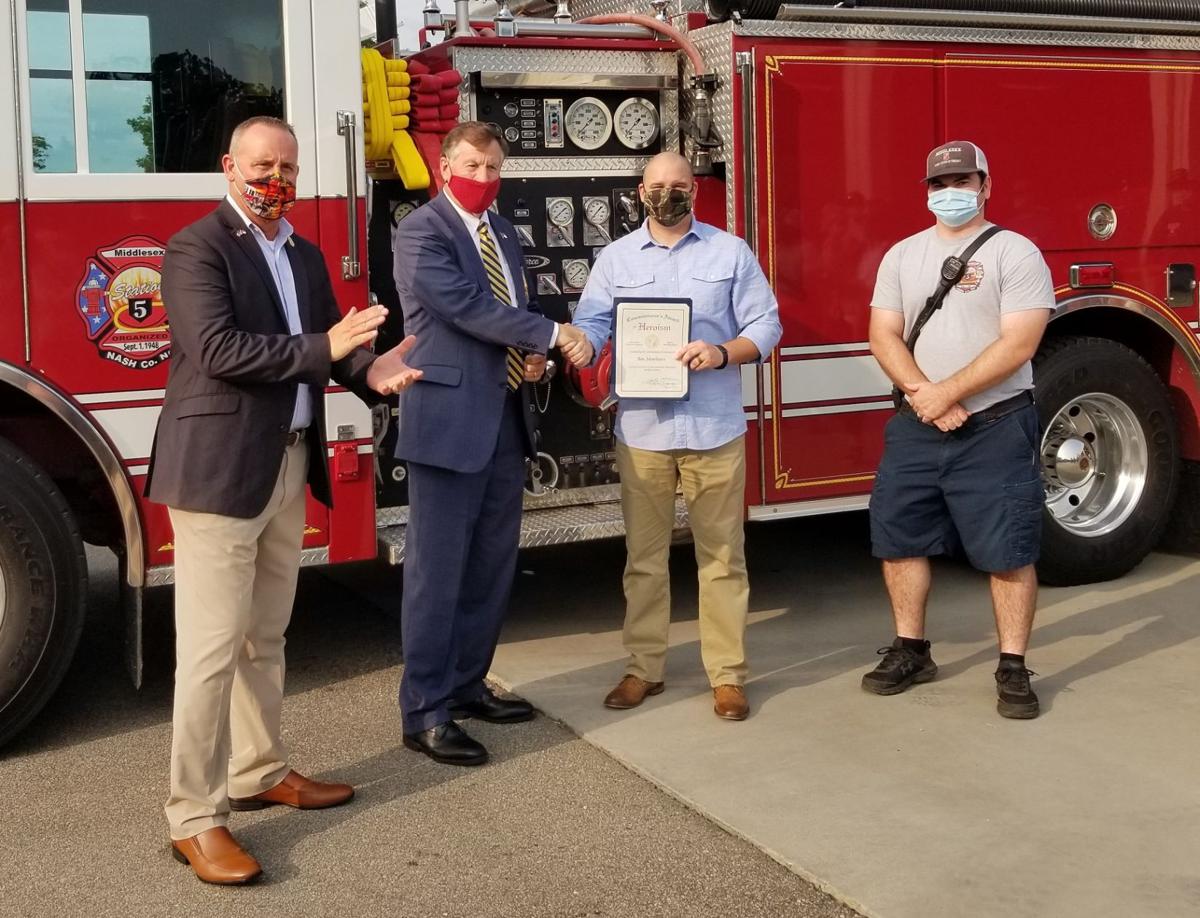 From left, Chief State Fire Marshal Brian Taylor and State Insurance Commissioner Mike Causey present a Heroism Award to Ben Matthews, a civilian who pulled a man from a burning vehicle. Next to Matthews is Garrett Strickland, a Middlesex firefighter who extinguished the blaze. 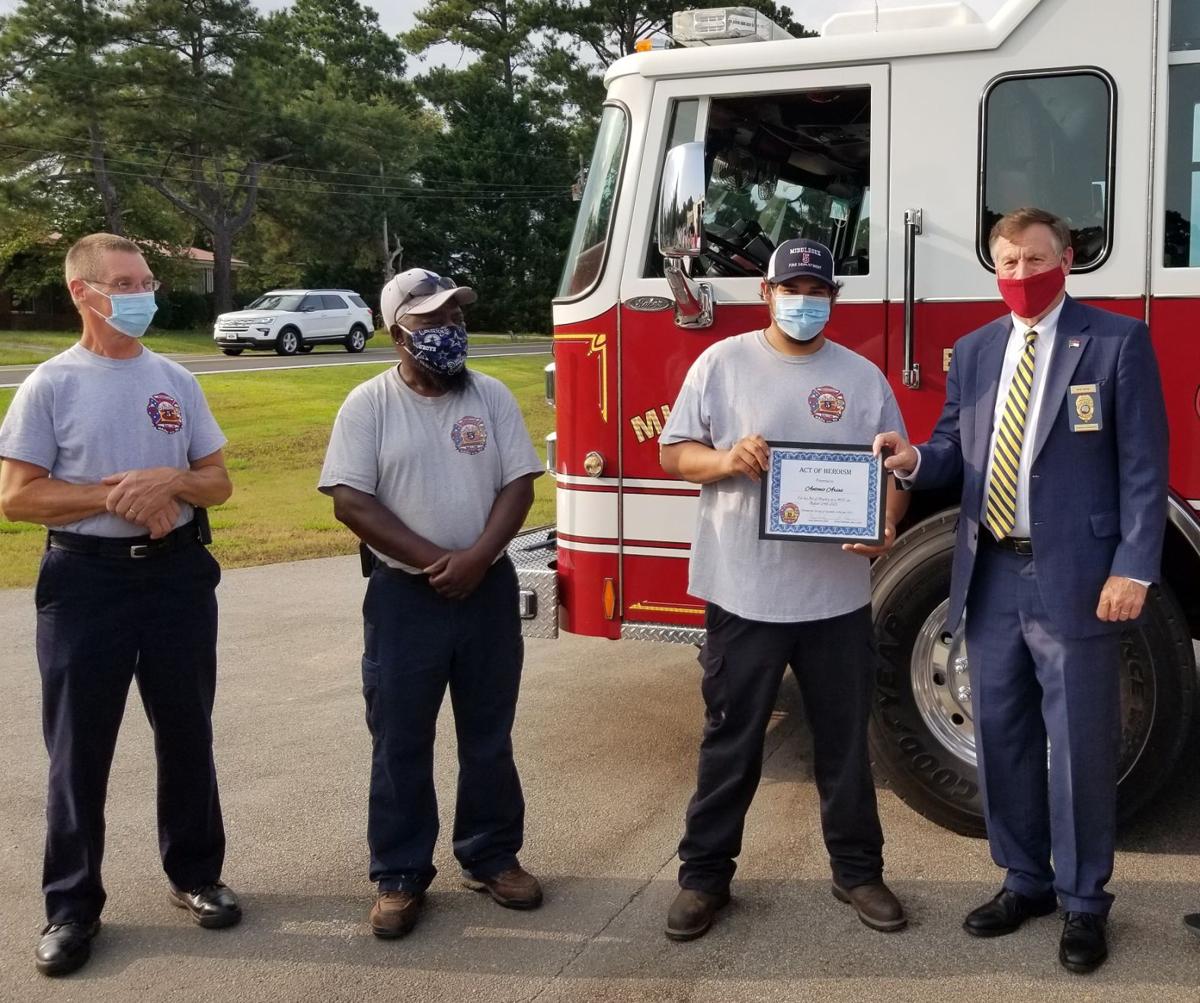 State Insurance Commissioner Mike Causey, right, presents a Save Award to Antonio Arias, a Middlesex volunteer firefigher, while other firefighters look on at left.

From left, Chief State Fire Marshal Brian Taylor and State Insurance Commissioner Mike Causey present a Heroism Award to Ben Matthews, a civilian who pulled a man from a burning vehicle. Next to Matthews is Garrett Strickland, a Middlesex firefighter who extinguished the blaze.

State Insurance Commissioner Mike Causey, right, presents a Save Award to Antonio Arias, a Middlesex volunteer firefigher, while other firefighters look on at left.

MIDDLESEX — State Insurance Commissioner Mike Causey stopped by the Middlesex Fire Department on Monday to give awards to two local heroes who were instrumental in saving the lives of others.

Causey, who also serves as the state fire marshal, presented a Heroism Award to Ben Matthews, a retired veteran, and another award to Antonio Arias, a volunteer firefighter with the Middlesex Fire Department who performed an especially heroic action while he was off duty.

Causey presented the awards on behalf of the state Department of Insurance.

“I would like to thank you for your actions in helping others,” Causey said.

Causey said the department only gives out a handful of awards like this each year.

Brian Taylor, who serves as the chief state fire marshal under Causey, said the department goes through a vetting process on these requests.

“Firefighters are heroes every day, but we look at whether they went above and beyond the call of duty,” Taylor said.

Taylor said that both men were in situations where they were not on the job at the time of the event and were not obligated to help. In both cases, they saved the lives of others. Each local hero was presented with a certificate and a gold-plated valor coin as a token of appreciation from the state.

Matthews was presented with the Heroism Award for his acts as a good Samaritan in coming to the rescue of a disoriented motorist who was suffering from extremely low blood sugar and was involved in a wreck. The wreck occurred on Aug. 18 on N.C. 231 on a bridge that crosses from Nash County to Johnston County.

The car was against the bridge on the driver’s side and Matthews pulled the driver from the burning vehicle before the local fire department could arrive on the scene. Matthews was credited with preventing injury and potentially saving the motorist’s life.

Matthews does not currently work for any agency, having just ended a stint in the military. He was just finishing his training as an emergency medical technician when the incident took place. He also has participated in search and rescue operations while serving in the Air Force and Coast Guard. He currently is interviewing for jobs in the emergency medical field. His eventual goal is to be a flight paramedic.

Matthews said he was glad to receive the award.

“It is absolutely incredible,” Matthews said. “You never stop to think, ‘I’m going to get something out of this.’ You just see someone in need, you jump in and the training kind of takes over. To get recognized for just doing the right thing when no one else is around is just reassuring and means a lot.”

Antonio Arias was presented with a Save Award for his role in the rescue of a man and his son on Aug. 24. The incident occurred on Earpsboro Road near N.C. 39 at the border of Nash and Johnston counties.

Arias, a volunteer firefighter who lives in Middlesex, was off duty crossing into Johnson County to go to a gas station. He came upon an accident and found a man lying in the car with a head injury. His legs were obviously badly broken and were wrapped around the steering column, Arias said.

The man’s son was in a car seat that was pinned between the vehicle’s open door and the frame of the car. Arias rescued the child and went back for the father, managing to pull him from the car just before the car exploded and was engulfed in flames.

Arias also was glad to receive the award, but said it was not necessary.

“The award is great, but I was just doing my job. I didn’t do anything special,” he said.