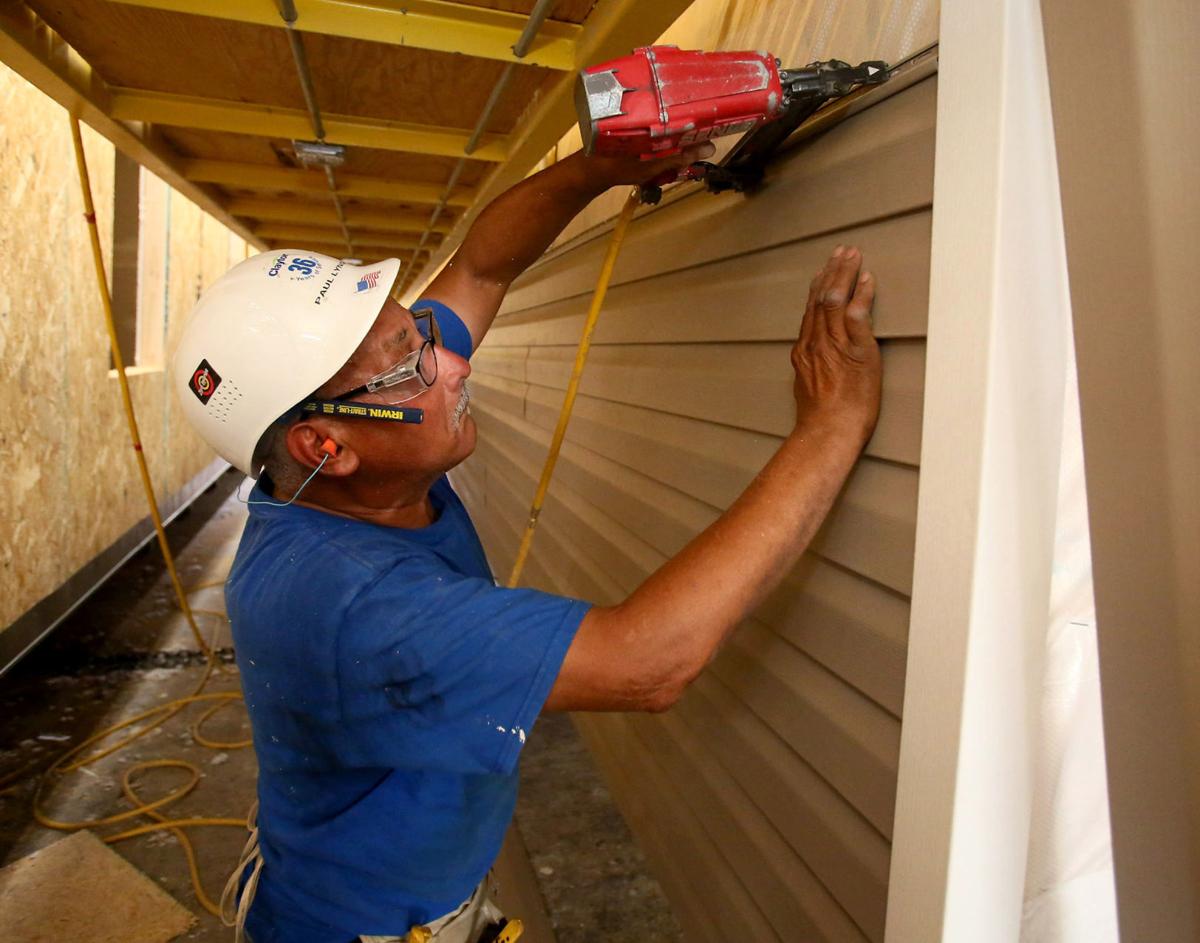 Paul Lynch, a 36-year employee with Clayton Homes of Nashville, installs vinyl siding on Tuesday at the business in Nashville. 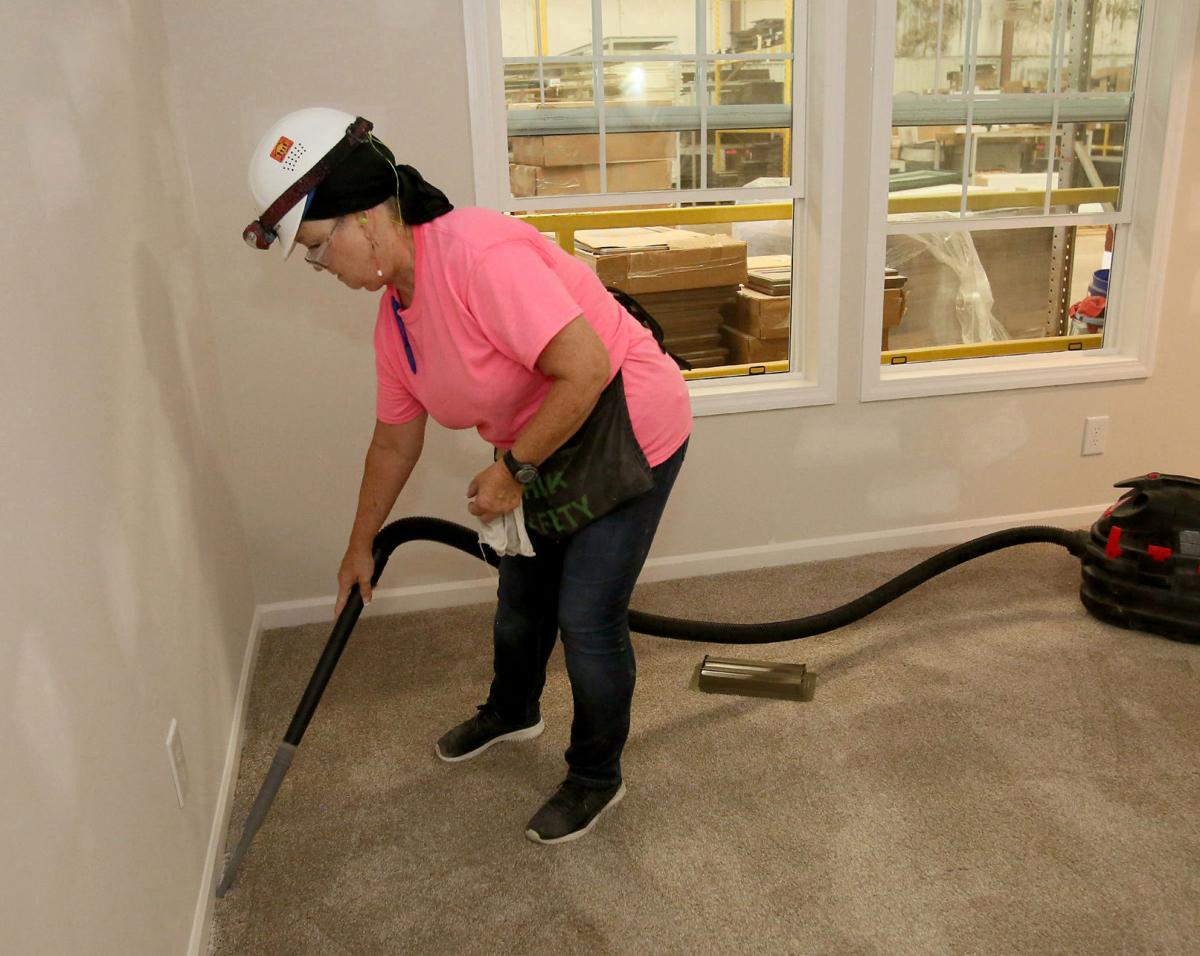 Janet Walker, a 27-year employee with Clayton Homes of Nashville, vacuums inside a new home on Tuesday at the business in Nashville.

Paul Lynch, a 36-year employee with Clayton Homes of Nashville, installs vinyl siding on Tuesday at the business in Nashville.

Janet Walker, a 27-year employee with Clayton Homes of Nashville, vacuums inside a new home on Tuesday at the business in Nashville.

The human resources manager at the Clayton Homes facility off Eastern Avenue in Nashville recently told a business and education gathering about her company’s efforts to hire and keep good employees.

Ashley Miles was one of a group of corporate officials who spoke at the recent summit of the Strategic Twin-Counties Education Partnership at Nash Community College.

Clayton Homes dates back to 1956 and since 2003 has been part of billionaire investor Warren Buffett’s Berkshire Hathaway conglomerate.

The Clayton Homes facility in Nashville employs about 225 people and is one of many Clayton Homes manufacturing locations throughout the nation.

Miles wears a second hat as team experience manager with Clayton Homes in Nashville, with the company as a whole having added a team experience department less than two years ago.

Miles told the STEP gathering that Clayton Homes understands if the company focuses on the team member experience in making the company the best place to be, then everything will follow.

Miles emphasized to the STEP gathering the importance of having a career with Clayton Homes instead of just a job.

She told of recently presenting a 42-year anniversary hat to an employee, which she noted was quite an awesome experience.

“So there actually can be a career within Clayton Homes in Nashville,” she said. “A large percentage of our workforce is tenured.”

She also noted Clayton Homes gives out a lot of anniversary hats to employees with more than 20 years of service.

“And it speaks to the nature of the work that we do at Clayton Homes in Nashville,” she said.

Miles emphasized the importance of team members being able to communicate with each other, particularly when working shoulder to shoulder building modular homes in open and large metal structures.

Miles said there are times when the temperatures are 100 degrees and above.

As for additional needs at the Nashville facility, she noted the importance of using basic tools.

“It was an eye-opener to me when I came to the facility that we had people from the community that were not able to use tape measures properly or nail guns and things of that nature,” she said. “So we have taken our training program and we have stepped it backwards a little bit. And we are going back to the basics so that we can start at the foundation and build up.”

She said Nash Community College has been phenomenal in listening to the needs of the Clayton Homes Nashville facility.

She also emphasized what she sees as a need for the education system to teach financial management, so employees do not end up unemployed due to a lack of money to pay for the gasoline to be able to drive to and from work.

She also told of the facility struggling with transportation-related issues.

“I’ve got one individual who walks over two hours to get to work,” she said. “My hat is off to him. I am so appreciative that he is there.

“A large percentage of my people actually carpool if they’re lucky enough to have a friend who works with us to carpool,” she said.

She said the company seeks trade workers, shingle layers, carpenters, plumbers, welders and anything it takes to build a home.

She told the STEP gathering of the importance of the community college as a by-the-telephone resource, with a recent example being the company needing welders.

“I was receiving phone calls back from instructors saying, ‘What do you need and how can I get ’em for you?’” she said.

As for the future, she said as employees finish their careers, Clayton Homes needs a succession plan.

She said Clayton Homes is trying to build a workforce varied in age and skill set so the company can move people right on up.

“We don’t need to be scrambling when they’re retiring,” she said.

The STEP gathering was held on Aug. 1.

STEP seeks to facilitate a workforce talent pipeline by creating and supporting initiatives about career awareness and career preparedness. A focus is on what the jobs are and what the credentials and skill sets are for them.