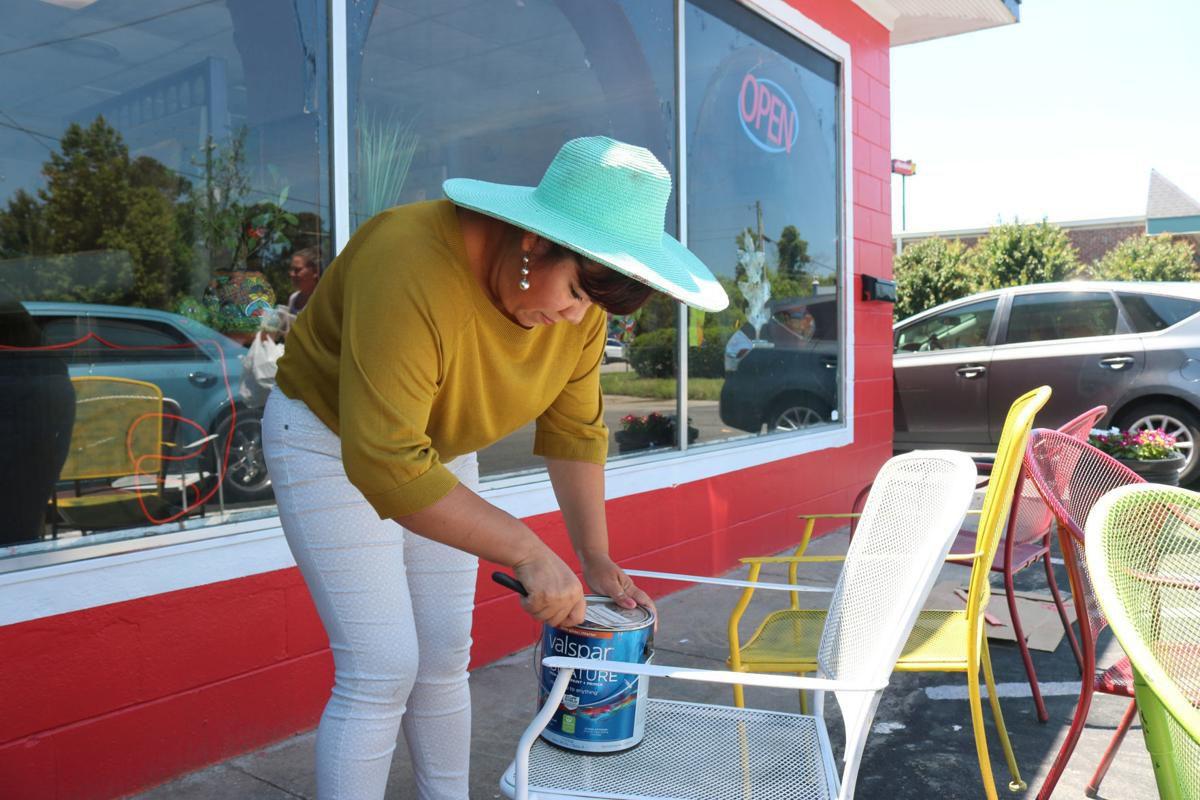 Monica Yañez, co-owner of Dos Hermanos Mexican Restaurant, opens a can of paint as she works to repair the flood-damaged restaurant on June 24 in Nashville. Below, booths and chairs are stacked up inside the restaurant as Yañez and her family work to clean it up. 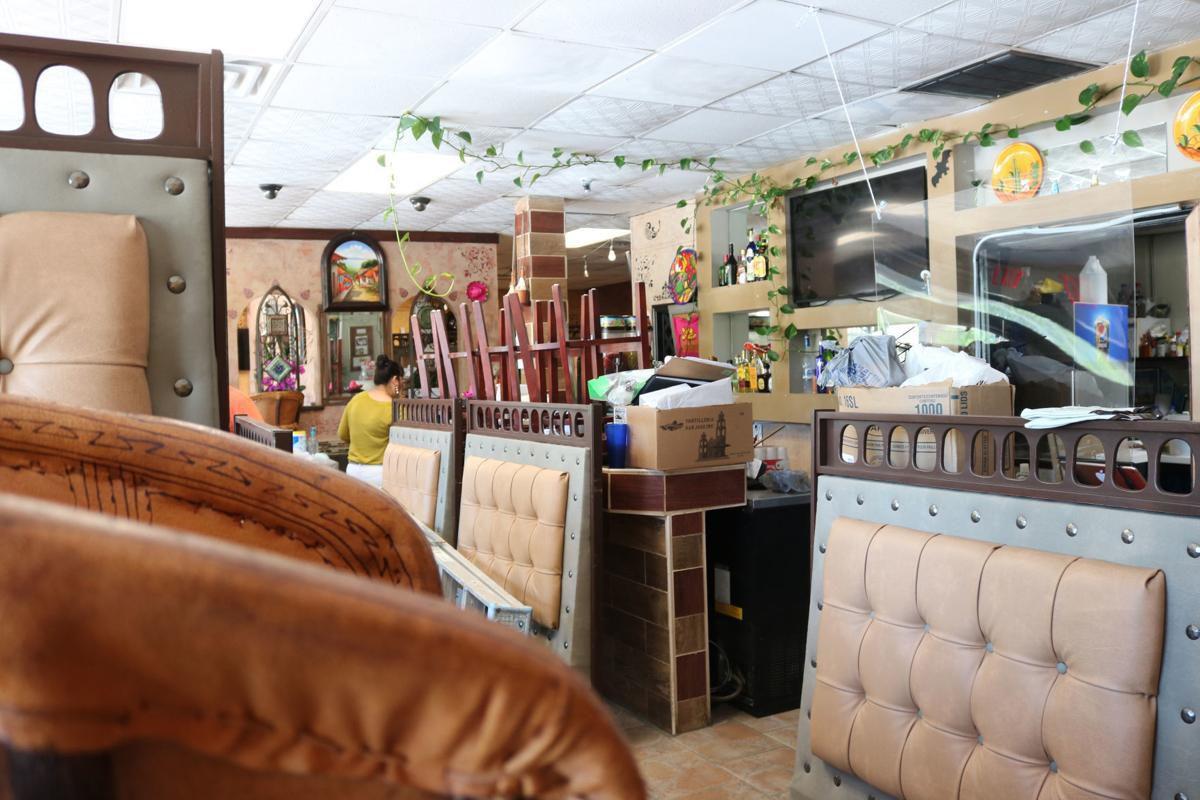 Booths and chairs are stacked up inside Dos Hermanos Mexican Restaurant as Monica Yanez and her family work to clean up the flood-damaged restaurant on June 24 in Nashville.

Monica Yañez, co-owner of Dos Hermanos Mexican Restaurant, opens a can of paint as she works to repair the flood-damaged restaurant on June 24 in Nashville. Below, booths and chairs are stacked up inside the restaurant as Yañez and her family work to clean it up.

Booths and chairs are stacked up inside Dos Hermanos Mexican Restaurant as Monica Yanez and her family work to clean up the flood-damaged restaurant on June 24 in Nashville.

NASHVILLE — Standing among a cluttered mess of booths and chairs in the middle of her recently flooded restaurant, Monica Yañez couldn’t help but get emotional.

“It gets your spirits down,” she said. “But at the end of the day there’s always a light.”

Dos Hermanos, the Nashville Mexican restaurant Yañez operates with her brother Pedro, was flooded on June 16 after a week of heavy rain. The timing couldn’t be much worse.

The state’s Latino residents, in addition to experiencing disproportionately high rates of unemployment and infection from the COVID-19 pandemic, also are at higher risk of losing their businesses.

A May study by consulting firm McKinsey & Co. said that 31 percent of Hispanic-owned businesses were labeled “at risk” based on profitability, credit scores and because they use retained earnings as a primary funding source, among other factors.

This is about 10 percent higher than the percentage of businesses labeled “at risk” which are owned by non-Hispanic white people (22 percent) and non-Hispanic Asian people (23 percent), but less than non-Hispanic Black business owners (37 percent).

Because many businesses owned by Hispanic people are in the food or service industry like Yañez’s, they are more heavily affected by quarantine-related measures and more likely to go out of business completely.

A study by the Stanford Institute for Economic Policy Research said that from February to March, the number of Latino business owners in the U.S. decreased 32 percent to 1.4 million people from 2.1 million people. This was more than the loss of both white business owners and Asian business owners, which saw a 17 percent and 26 percent decrease respectively during the same time period.

Despite the odds of going out of business, Yañez is hopeful that the restaurant will recover. This is not the first time the restaurant has been flooded by Stoney Creek, which flows about 400 feet behind the restaurant.

In 1999, before Dos Hermanos occupied the building, Yañez said Hurricane Floyd completely sunk the structure. After Dos Hermanos moved in, Hurricane Matthew flooded the restaurant slightly more than it did last week.

“This was a surprise because we never imagined that this would happen just because of rain,” Yañez said.

The flooding broke two refrigerators in the kitchen, and much of the lower sections of walls need to be replaced to avoid mold growth. The building owners, Donnie and Lana Langley, said they have flood insurance and will be paying for the repairs, but until the restaurant is repaired and reopened, Yañez and her family are out of work.

The restaurant is the lifeblood of the Mexican immigrant family. Yañez’s brother, husband, sister-in-law and Yañez’s children all work there in some capacity and they have no other source of income.

Yañez, who came to the United States from Mexico almost 30 years ago, worked in food service for many years. About six years ago, she and her brother saved up enough to rent the location on West Washington Street and fulfill their dream of operating a restaurant.

As restaurant owners, Monica and her brother believe in giving back to the community. Even though the COVID-19 pandemic decreased business, they still offered a 50 percent discount to health care workers.

Benjamin Alvarez, a family friend, said this gesture shows just how kind and caring the family is.

Alvarez set up a donation page on Facebook to raise money for the family and hopes that the community will help them out in their time of need.

To open the restaurant as soon as possible, Yañez and her family are replacing the walls and cleaning the space on their own.

Yañez said the last time the restaurant flooded they were closed for almost four months, and that it will be some time before they will be able to open again.

As she scrolled through the comments on the restaurant’s Facebook page, Yañez saw an outpouring of support from customers and friends.

“Some customers have asked us how we’re doing and have said they’re sorry for what happened,” Yañez said. “Honestly, those words will help us come back from this.”

To donate to the Yañez family, visit https://bit.ly/2BEpVKa.

The NC News Intern Corps is a program of the NC Local News Workshop, funded by the North Carolina Local News Lab Fund and housed at Elon University’s School of Communications.