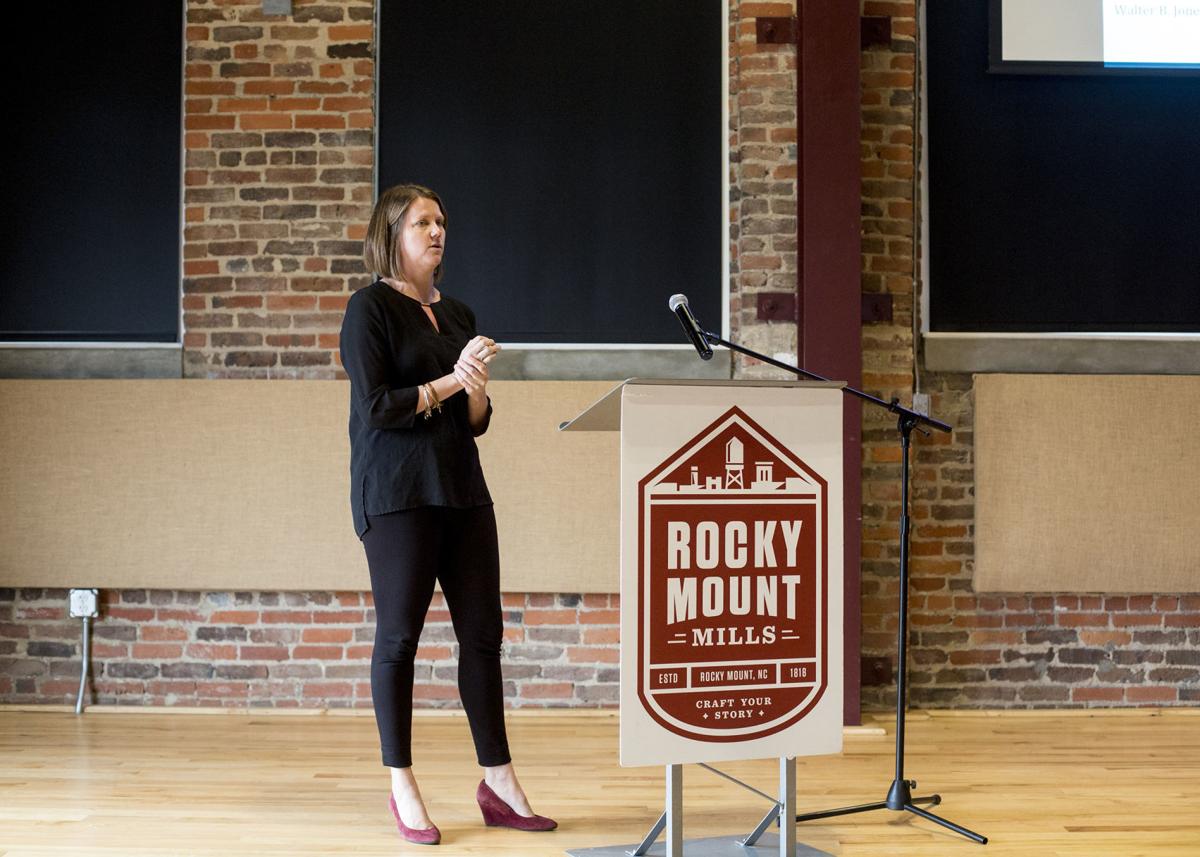 Jennifer Harrup, director of East Coast Counseling, talks to the crowd Wednesday at a Heroin and Opioid Awareness Event at the Power House at Rocky Mount Mills. The event also included members of the U.S. Attorney’s Heroin Education Action Team, or USA HEAT, which educates community members about the growing harm to families and communities caused by substance abuse. 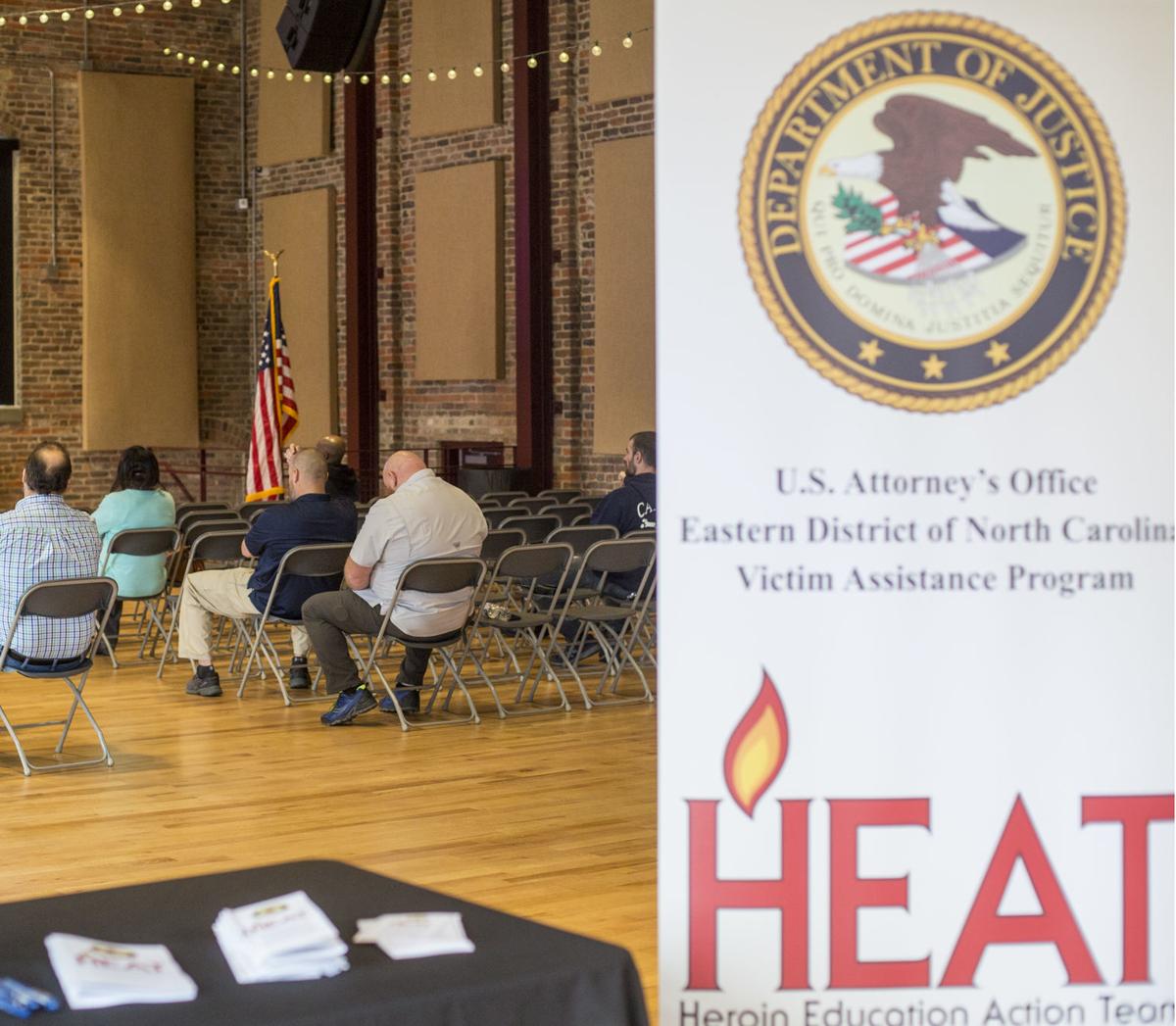 HEAT educates community members about the growing harm to families and communities caused by substance abuse.

Jennifer Harrup, director of East Coast Counseling, talks to the crowd Wednesday at a Heroin and Opioid Awareness Event at the Power House at Rocky Mount Mills. The event also included members of the U.S. Attorney’s Heroin Education Action Team, or USA HEAT, which educates community members about the growing harm to families and communities caused by substance abuse.

HEAT educates community members about the growing harm to families and communities caused by substance abuse.

Members of the U.S. Attorney’s Heroin Education Action Team came to the Rocky Mount Mills on Wednesday for a Heroin and Opioid Awareness Event sponsored by the Rocky Mount Police Department.

Other presenters included Jennifer Harrup, director of East Coast Counseling, and Jason Corprew, a detective with the Wilson Police Department and a DEA Task Force officer. Becky and Mike Cannon of Wilson, founders of JCANS, also were on hand to discuss the devastation of losing a child to opioid abuse and their ongoing mission to support individuals and their families who are struggling with the effects of addiction.

King said the U.S. Attorney’s Office engages in this effort because they are concerned about getting the word out.

“There are some people who have the impression that if we don’t talk about this issue, it doesn’t exist,” King said. “But the reality is that it does exist, and we are in a crisis. And unfortunately, this side of the state has stark numbers as it relates to overdose.”

King said USA HEAT is committed to presenting information about heroin and opioid issues to as many groups as possible.

“We are passionate about sharing this information with law enforcement agencies, community members and medical professionals,” King said. “This year, we are planning to also speak to young people in middle school and high school because they are often the ones who are getting approached with this.”

Corprew shared the story of a heroin overdose death that occurred in 2015 in Wilson and resulted in the charging of three people in connection with that death. Tim Allan Barkley, 43, died on March 27, 2015, at a home in Wilson. Elton Wayne Walston, the person who sold him the drugs that led to his death, was convicted in federal court in 2017. Walston was sentenced to 327 months in prison for his part in Barkley’s death.

Corprew said that one of the biggest concerns in prosecuting this case was the stigma that can be attached to addiction.

“The biggest hurdle was that we had to break the stigma of an addict,” Corprew said. “There is a stigma that goes on with being an addict, which is somewhat changing now, thanks to programs like this. Some people feel that addicts don’t really matter because they made their choice ... What you are dealing with is a person who, through whatever circumstances, have found themselves in this situation.”

Though this case was prosecuted at the federal level, Corprew said that a new state law is making it easier for these crimes to be prosecuted at the state level. The law, which took effect in December, removes the element of “malice” from the requirements to convict when drug distribution leads to the death of someone from an overdose.

Brian Meyers, an executive assistant with the U.S. Attorney’s Office, said his office is working with law enforcement agencies to train officers in investigating these crimes more efficiently. Meyer was a prosecutor in drug cases before assuming his current role.

“These are often hard cases to prove, but we are helping to train law enforcement agencies and law enforcement is getting better at investigating these cases,” Meyers said. “That is a major contributing factor in our ability to charge people in more of these cases that result in death.”

Mike and Becky Cannon gave a moving presentation of what it was like to lose a son to overdose and shared strategies of ways to work with families who are facing the addiction of a loved one.

“As a parent, I can’t tell you how deep that loss is,” Mike Cannon said. “The struggle is real. The opioid crisis is affecting people of all ages, races and economic levels.”

“We are in this together. We are going to fight it together,” Cannon said. “No one person and no one group can fix this. It is going to take all of us.”