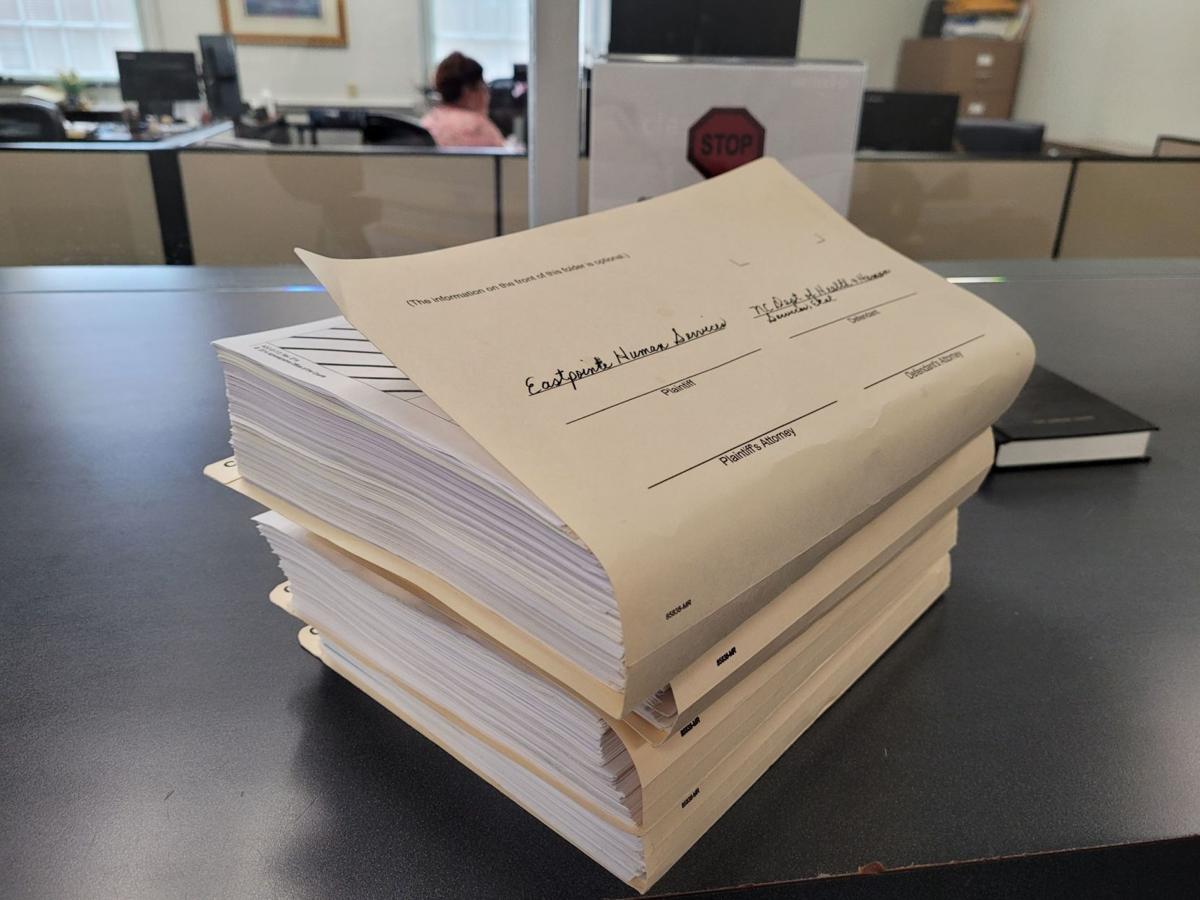 Documents from the ongoing legal battle involving Eastpointe, Nash County, Edgecombe County and the state Department of Health and Human Services sit on a counter at the Nash County Clerk of Court’s Office in Nashville. Eastpointe, as part of its lawsuit, lays claim to the building pictured below at 500 Nash Medical Arts Mall on the Nash UNC Health Care campus. 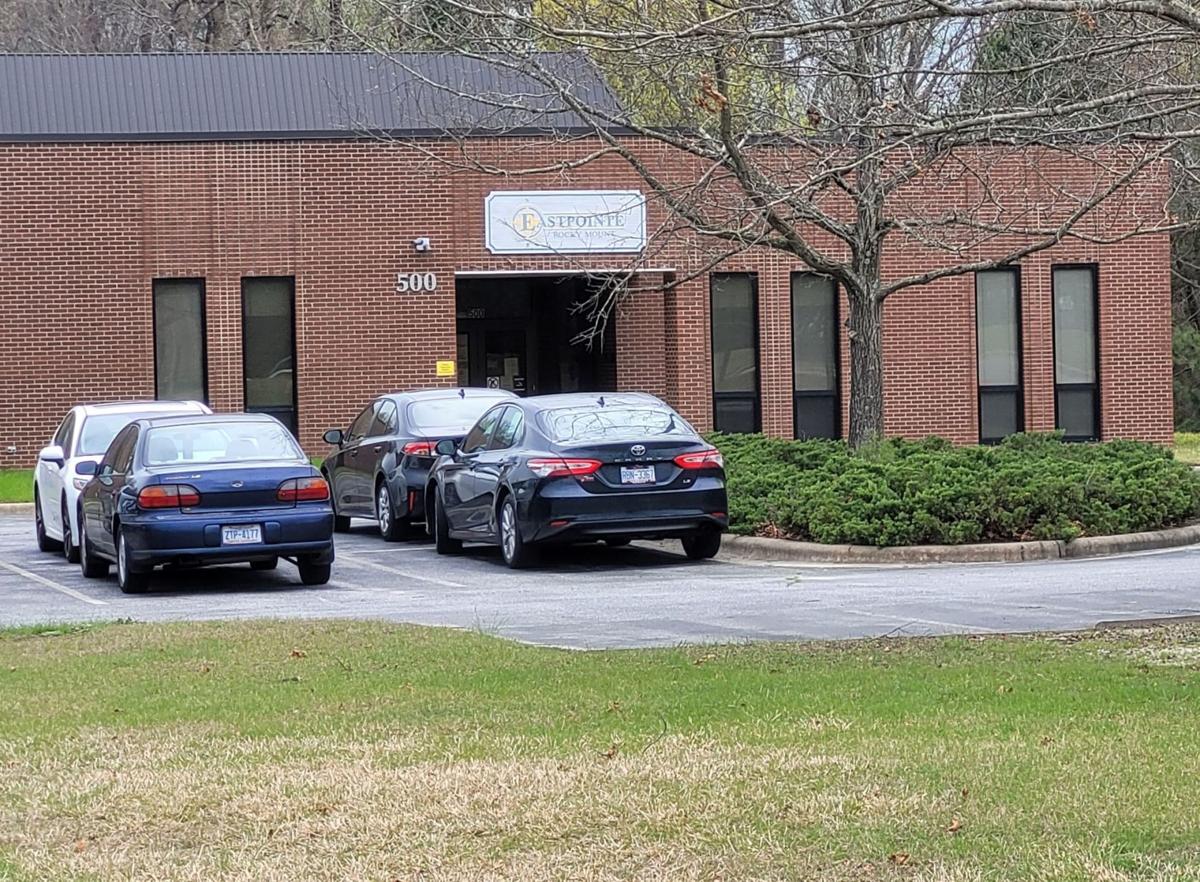 Eastpointe as part of its lawsuit lays claim to this building at 500 Nash Medical Arts Mall on the campus of Nash UNC Health Care campus.

Documents from the ongoing legal battle involving Eastpointe, Nash County, Edgecombe County and the state Department of Health and Human Services sit on a counter at the Nash County Clerk of Court’s Office in Nashville. Eastpointe, as part of its lawsuit, lays claim to the building pictured below at 500 Nash Medical Arts Mall on the Nash UNC Health Care campus.

Eastpointe as part of its lawsuit lays claim to this building at 500 Nash Medical Arts Mall on the campus of Nash UNC Health Care campus.

Though Nash County severed its relationship with Eastpointe Human Services in 2017, the county has spent nearly a quarter of a million dollars in legal fees defending itself from a massive lawsuit that now affects Edgecombe County coffers as well.

Nash County commissioners voted on a budget adjustment in March that would allot another $125,000 to be available to defend the county for the remainder of the fiscal year as the Eastpointe lawsuit is once again draining the allotted budget for legal services for the county.

Eastpointe Human Services is a managed care organization that coordinates health care for people in eastern North Carolina who struggle with mental illness, substance abuse and intellectual developmental disabilities, according to its website.

“This whole lawsuit really isn’t newsworthy except for the fact that it has gone on for so long,” Nash County Attorney Vince Durham said. “We are frustrated with this situation and the county commissioners are frustrated with it. I have lost some sleep and some hair over this lawsuit.”

A brief history of mental health care in the Twin Counties is needed to better understand the complex issues surrounding the lawsuit.

The Edgecombe-Nash Mental Health Authority began in the late 1970s. It merged with Wilson and Greene counties in 2007 to form the Beacon Center. Beacon joined Eastpointe in 2012. Nash County joined Trillium Health Resources on July 1, 2017. A federal lawsuit was filed by Eastpointe in May 2017 to try to prevent Nash County from leaving Eastpointe and engaging with Trillium.

“We have been in litigation with Eastpointe since then,” Durham said in a recent interview.

Nash County commissioners had good reasons to begin re-examining their relationship with Eastpointe in 2015. One of the factors was the Eastpointe financial scandal that erupted in June 2015.

More information about that audit report can be found at http://compassnews360.com/wp-content/uploads/2015/06/State-_Auditors-_Report.pdf.

In December of that year, the State Bureau of Investigation arrested former Eastpointe Human Services Chief Financial Officer William Robert Canupp on nine charges of felony financial-transaction card fraud and embezzlement. In August 2017, Cannup reportedly was sentenced to 42 months in prison, supervised release and required to pay restitution of $731,180 in connection with the Eastpointe financial crimes.

About that same time, Nash County commissioners also discovered that Eastpointe was charging Nash County more for its services than it was for services provided to other counties in its “catchment” that had similar populations, said Attorney Dee Whitley in a recent interview. Whitley, an attorney with Battle Winlsow, has been spearheading the legal efforts for Nash County in this case.

Nash County asked to “disengage” from Eastpointe and partner with Trillium Health Resources instead. That decision had to be approved by the state Department of Health and Human Services, which agreed to the plan. The move to leave Eastpointe and align with Trillium became effective on July 1, 2017.

Before that move was finalized, Eastpointe filed a federal lawsuit against Nash County in May 2017 in an attempt to prevent the “disengagement” from happening. That attempt failed.

“One of the arguments Eastpointe is trying to argue is that a county is never allowed to leave once they agree to merge,” Whitley said.

The lawsuit filed by Eastpointe was not only filed against Nash County. It was also filed against the state Department of Health and Human Services and the current and former secretaries of that department. These people and entities are being sued for their part in allowing Nash County’s disengagement from Eastpointe to take place, Whitley said.

When the federal lawsuit was quickly dismissed, Eastpointe filed a lawsuit in Duplin County, Eastpointe’s home base. That lawsuit was moved in an amended form to Nash County in September 2020, where its massive files continue to grow.

The lawsuit also seeks $600,000 from Nash County. This money is funds that Nash County withheld from payments to Eastpointe over the past two years because of concerns that money was being misspent. Durham said that roughly $160,000 of those funds were paid in the past year by Nash County directly to providers of mental health services because commissioners did not trust Eastpointe to pay them.

The final party being sued by Eastpointe in the legal action is Edgecombe County. In May 2019, Edgecombe County was added to the amended lawsuit even though the county still is paying Eastpointe to manage its mental health services.

Eastpointe’s complaint was amended to lay claim to the building at 500 Nash Medical Arts Mall on the campus of Nash UNC Health Care. Eastpointe argued that the building, which is co-owned by Nash County and Edgecombe County, should have been given to Nash-Edgecombe Mental Health Authority and later passed on to Beacon and then to Eastpointe.

Even though Eastpointe no longer has any association with Nash County, it still has a base of operations in that building and pays no rent to either Nash or Edgecombe counties, which are on record as the owners of the facility, Nash County Manager Zee Lamb said.

As a result, Edgecombe County has had to pay for lawyers on both sides of the lawsuit, Durham said. As members of the Eastpointe catchment, Edgecombe County is contributing financially to Eastpointe’s legal position. As a defendant in the case, it also is having to pay lawyers to defend its claims to the building it co-owns.

Edgecombe County also is being negatively affected because Nash County already has set aside roughly $2 million to buy out Edgecombe’s interest in the building. Because of the looming lawsuit, that deal is on hold.

Over the past nearly four years, legal motions have been filed and refiled, dismissed and appealed.

“Eastpointe has lost every time we have gone to court,” Dunham said.

The legal actions against Nash County, Edgecombe County and the state DHHS have been meandering along for nearly four years and seem to have no end in sight. In the meantime, Nash County alone has spent about $230,000 in defending itself against the legal actions that now fill more than 1,500 pages of documents related to the case.

The issues seem to be no closer to being settled, and it appears that no one, except the many lawyers involved in the case, is benefitting from the legal battle.

It remains unknown how much money Edgecombe County and the State of North Carolina have spent in this massive legal battle. The Telegram is looking into these issues and has filed a public information request to learn how much Eastpointe itself has spent in waging this legal war.

What is clear is that most of the money spent in the legal battle comes, in some form or other, from taxpayers’ pockets.

Despite the legal battle, Nash County leaders said they are thrilled to be aligned with Trillium.

“Nash County is very happy with our affiliation with Trillium,” Lamb said.

“The biggest difference is that we get tremendously better service for our citizens with Trillium,” Davis said in a recent interview. “Plus, we got a $750,000 grant for Miracle Park from Trillium. It has been a great move.”

State Sen. Lisa Barnes, R-Nash, said she also is glad that Nash County made the move. Barnes is in a unique position because she served on the boards of Nash County and Eastpointe as the original issues were being decided.

Barnes said she is urging Eastpointe to put an end to the legal madness.

“I’m at a loss when trying to understand how a lawsuit against Nash County and DHHS that was filed in 2017, appealed twice by Eastpointe and has cost taxpayers over $1 million is beneficial to the recipients of Eastpointe Human Services,” she said. “This ongoing legal action is an extraordinary waste of public resources. I’m calling on the Eastpointe Board of Directors to exercise oversight and fiduciary responsibility by ending this lawsuit.”