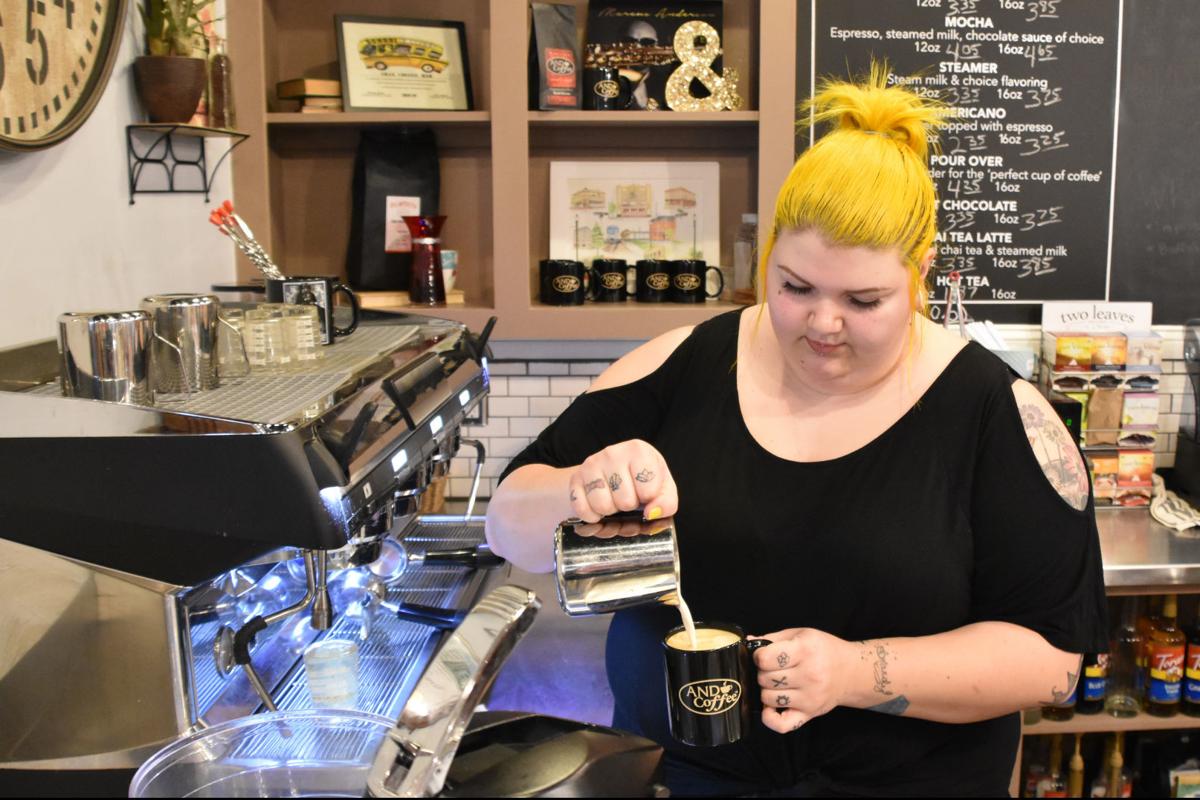 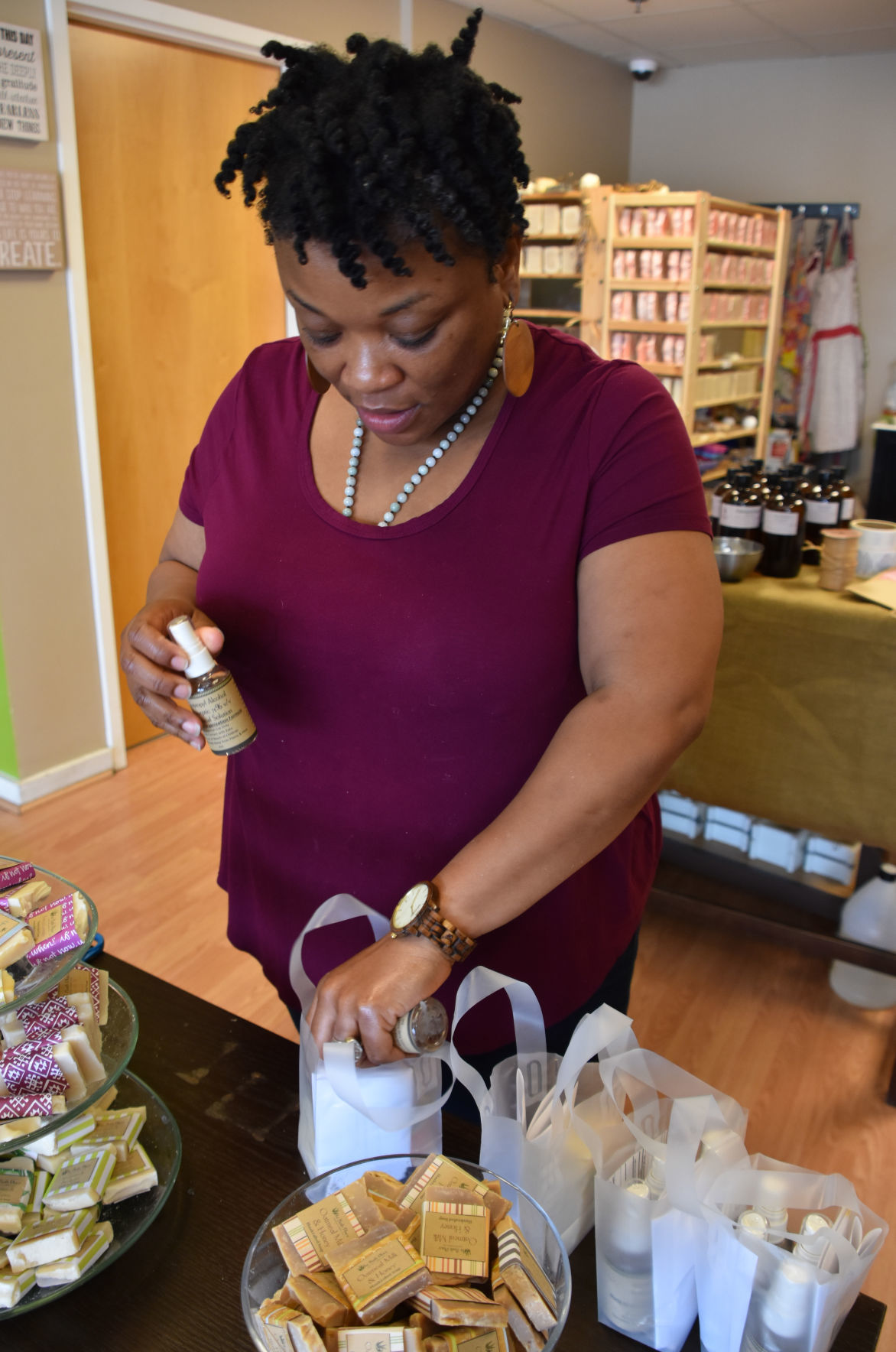 Kimberly Clayton, owner of The Bath Place, has been making hand sanitizer for sale in two-ounce containers, one of which is in her right hand. 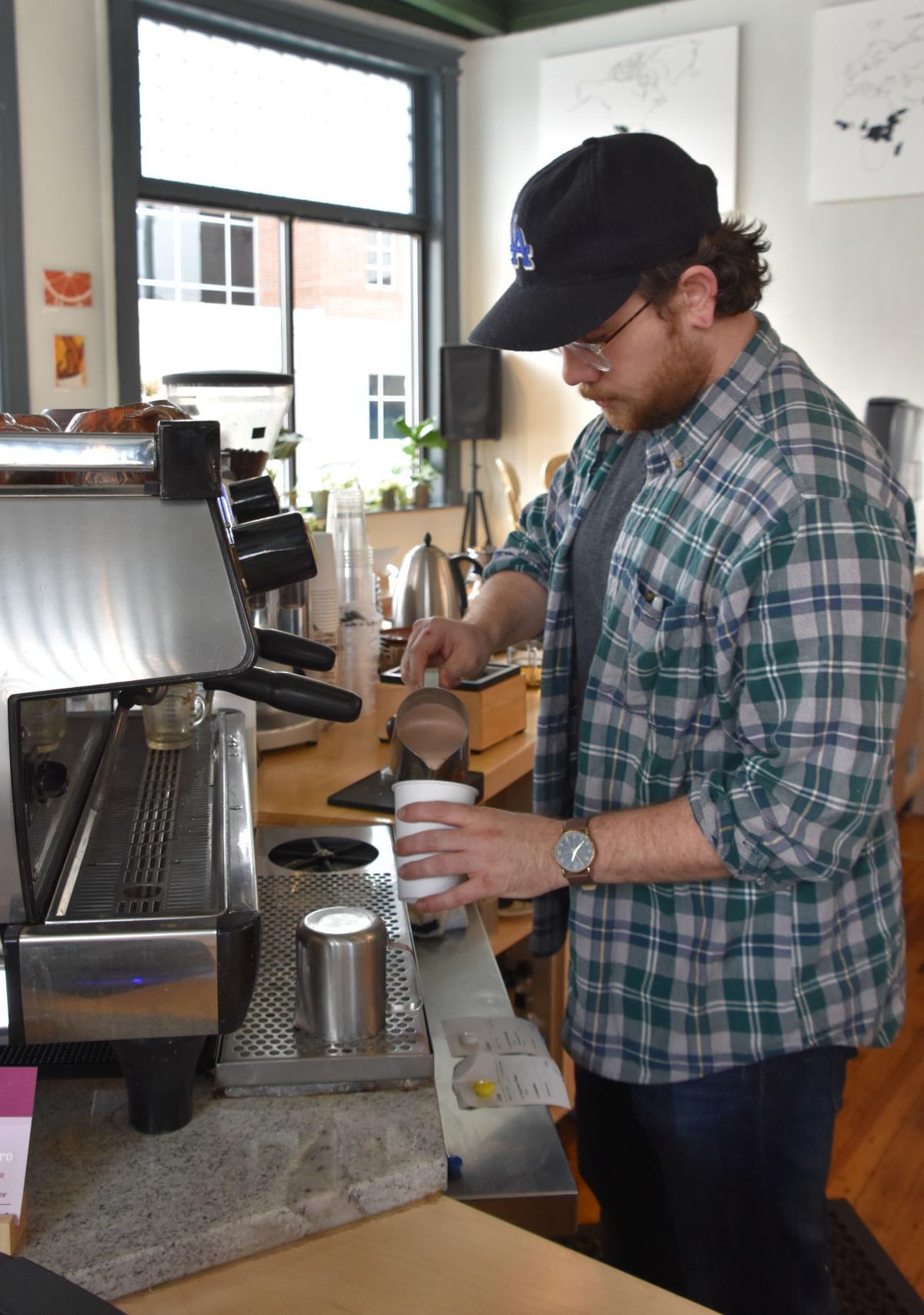 Kimberly Clayton, owner of The Bath Place, has been making hand sanitizer for sale in two-ounce containers, one of which is in her right hand.

The old saying about being able to go with the flow and roll with the punches certainly can apply to Kimberly Clayton.

Clayton is founder of The Bath Place, which is in the Douglas Block and which sells soaps and body care items.

Clayton is remaining open for business because she came up with a product in quite high demand in the midst of the coronavirus: Hand sanitizer.

“It has been overwhelming but satisfying,” Clayton said on Friday of the experience of being able to sell the product.

Clayton has been making and offering the product in two-ounce spray containers and in three-pound tote jugs.

Clayton said a key component of her product is glycerol, a supply of which she already had on hand, and she also said the product includes distilled water, eucalyptus essential oil and tea tree oil.

And Clayton said she makes the product in large batches at a time.

Clayton said she worked with Boys and Girls Clubs of the Tar River Region CEO Ron Green and with Green’s wife, Robbie, an entrepreneur, in helping get the product ready for distribution.

“And so as I make it, they have been helping me to meet the demand with bottling and labeling, because really it has been crazy,” Clayton said.

Clayton said she had not been making hand sanitizer prior to the pandemic, but she said one day Ron Green entered the business and asked her to consider making the product because supplies of hand sanitizer were running low locally.

News of Clayton’s product appeared on March 21 on Facebook.

Clayton on Friday did not immediately have more of the two-ounce containers of the product left to sell in person because they all have been ordered in advance.

Clayton said that in the meantime, former Twin Counties residents living as far south as New Orleans have gotten wind of what she is doing and have been asking whether they can purchase the product.

Clayton said she was continuing to work the same business hours, which are from noon to 6 p.m. Tuesdays through Fridays and from 10 a.m. to 6 p.m. on Saturdays.

A few other downtown businesses could be seen open on Friday.

“Things have definitely slowed down a lot, but we’re thankful for the support of the community,” McLaughlin said. “The regulars are continuing to come.”

McLaughlin said he has been able to keep his team in place, but he said he adjusted the business hours.

Larema had previously been open from 7 a.m. to 8 p.m. Mondays through Fridays and from 8 a.m. to 8 p.m. on Saturdays and also had remained open later at times to accommodate comers from events.

McLaughlin said he and his team added Sunday hours to be of service to the community in offering coffees and healthy food options.

McLaughlin said the menu continues to include different pastries in the morning, sandwiches and wraps at lunchtime, in-house made soups and desserts.

And McLaughlin said Larema is selling beer and wine to go.

While McLaughlin is thankful for the support he and his team have received, he said the situation has been hard.

“I’m concerned that it’s only going get more difficult for us,” he said.

At the Trax Coffee Bar in the Station Square building, Amber Phillips, a barista anda manager of the business, said, “Things actually haven’t stopped that much.”

“Most of our business is takeout anyway,” she said, “so it has been pretty steady still.”

Phillips attributed the inflow to having loyal customers to people working in Station Square and to people from throughout downtown.

Phillips said the only major change is Trax cannot offer lunches and wraps for the time being because of the loss of their supplier, the Rocky Mount Event Center, due to the pandemic.

Phillips said she is concerned about other downtown businesses and noted, “I’ve been trying to support ‘em when I can.”

Just off the railroad tracks, Davis Furniture Co. part-owner Melanie Davis was working at a desk, but she said her team was disinfecting the door knobs and the hand railings every few hours to ensure safety.

Davis said as a result of people spending more time in their homes due to the pandemic, “We’ve sold several beds.”

And Davis said there also has been an increase in sales of mattresses.

Although appliance sales are a small part of the business at Davis Furniture, Davis said she is sold out of freezers due to people buying them to stock up on frozen foods.

And Davis said more freezers have been ordered and are going to be coming.

Davis said she is keeping her team in place and said the business hours remain the same, from 9 a.m. to 5 p.m. Mondays through Fridays and from 9 a.m. to 2 p.m. on Saturdays.

Overall, Davis said, “We really cannot afford to close until we’re told we have to.”

As for the reason why, Davis said, “We are a family owned business and we rely on our sales to just be able to keep on going.”