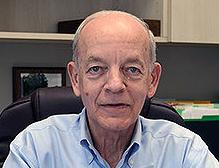 A historically African-American church in the Little Raleigh area of the city — and long led by a civil rights activist — is claiming a longtime developer is a racist who has long been landlocking the house of worship.

Ebenezer Missionary Baptist Church, whose senior pastor is the Rev. Thomas L. Walker, said in a press release that for too long, there have been people who have found it necessary to figuratively put their “knee on the neck” of African-American progress in the nation, and in this instance, the church.

The prepared text said that the church, which is in the 700 block of West Raleigh Boulevard, has not been exempted from this same type of constraint in being “landlocked” by Jim Rabil, who is CEO of Chambliss & Rabil.

Walker, when reached on Tuesday by the Telegram, said that “yes-sir, a hundred percent” he stands by the text of the press release.

Additionally, the plan is for a press conference at noon on Saturday at the church, followed by a march.

Rabil, when reached on Tuesday by the Telegram, said that he already had read the press release and that “I certainly do not consider myself a racist.”

As for what the text said about him, Rabil said that, “Well, I think it’s very unfortunate that someone would resort to that kind of language, but it’s a free country — and they can express themselves any way that they like.”

As for whether he is angry or upset he would labeled as such like this in the press release, Rabil said, “Disappointed is a better term.”

Rabil has been doing business in the community since 1975 and Chambliss & Rabil has an office in the 800 block of Country Club Road in the Hunter Hill area.

Rabil told the Telegram that he always has supported the work of Ebenezer Missionary Baptist and that he believes the church does quite nice community work via the church’s programs.

Near the end of the church’s press release, the prepared text said that, “In an effort to grow the church into the 21st Century, combined with proposing a collaborative community development partnership, Ebenezer Missionary Baptist Church again faces the challenge of a ‘Rabil knee’ on the church’s neck that is seeking to cut off the opportunity for the church to breathe new life into the Little Raleigh community.”

This is in reference to the church wanting to construct a family life center.

According to the press release, the plan is for rooms for senior center activities, multiple facilities for youth development and facilities for the development of young adults, the latter of which would include entrepreneurship training.

“And we were unable to reach an agreement — and this is the result,” Rabil said.

Rabil also said that he gave the church the first chance to purchase the shopping center before that location was placed on the real estate market.

Rabil said he told the church that if the church’s long-range planning included a larger area around the church, then the church would need the shopping center.

Rabil said he in turn proposed that if the church would purchase the shopping center, then he would give the church the land adjacent to the church.

Walker told the Telegram that Rabil is trying to sell the church the shopping center when that property is not in the church’s equation right now.

Rather, Walker made clear that the church is interested in the area adjacent to the church and that once the church acquires that property, the church would be happy to work with the City of Rocky Mount and whoever else in developing the shopping center.

The “knee on the neck” is a reference to video showing then-Minneapolis police officer Derek Chauvin, who is white, using one of his knees to keep George Floyd, who is African-American, pinned down by the neck on May 25, with Floyd saying, “I can’t breathe.”

The press release quotes church Deacons Ministry Chairman Paul Allen Jr. as saying that the church had been operating in good faith with Rabil until a conflict began years ago.

The press release said that Rabil has been unrelenting in his attempts to “strong arm” the church and that, “We see this as racism, not reason.”

The press release said that although the church has experienced phenomenal growth for more than a century and during Walker’s pastorate, he inherited a congregation held hostage by “the egregious disrespect” by Rabil for the church’s mission and ministry in the Little Raleigh community.

The press release also said that, “As unbelievable as it was, Rabil orchestrated an aggressive move to landlock a poor, struggling African-American congregation by purchasing the surrounding homes at an extremely low price.”

Walker also told the Telegram about a three-room structure that had long ago been used to provide education for African Americans in the community and had both historic and sentimental value.

Walker told the Telegram that Rabil knocked down the former school without speaking to African Americans beforehand.

The press release also said that the church tried to acquire the adjacent land on the southwest side of the church that now is the church’s parking lot and that Rabil said no.

The press release said that the church eventually was able to make the purchase.

Ebenezer Missionary Baptist was founded in 1916 and Walker began serving as a pastor at the church at the start of the 1970s.