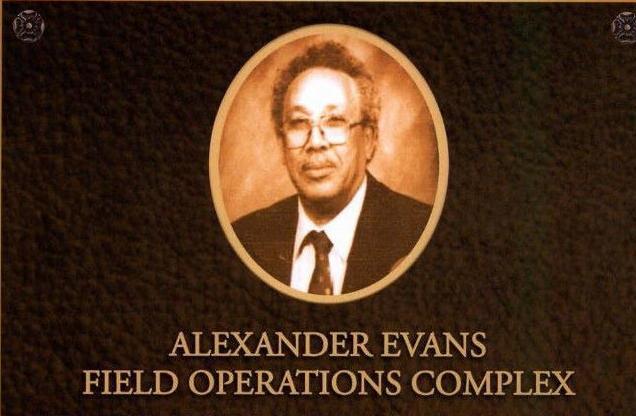 Shown here is an image of a city plaque that is going to honor the late sanitation employee Alexander Evans. 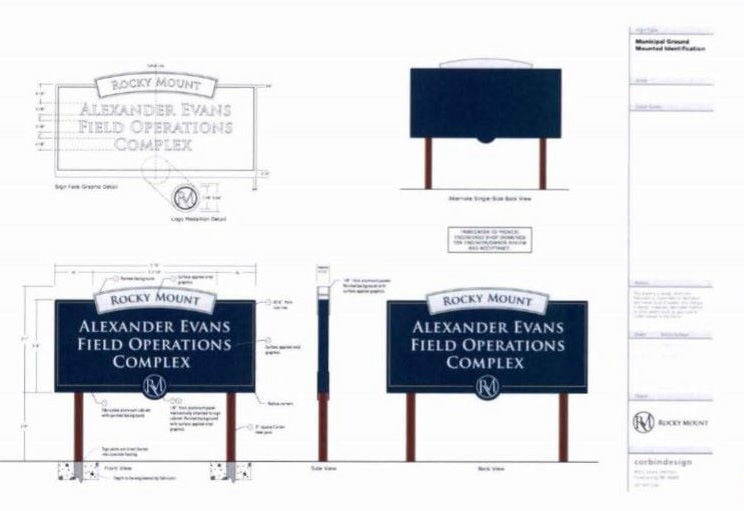 Shown here are illustrations of city signs to be made to show the field operations complex is named in honor of the late sanitation employee Alexander Evans.

Shown here is an image of a city plaque that is going to honor the late sanitation employee Alexander Evans.

Shown here are illustrations of city signs to be made to show the field operations complex is named in honor of the late sanitation employee Alexander Evans.

Alexander Evans, the since-deceased Rocky Mount sanitation employee whose suspension in 1978 prompted a strike, is going to be remembered with signage and a plaque at city facilities.

City Public Works Director Brad Kerr, in a memorandum to City Manager Rochelle Small-Toney in advance of the City Council work session set for Monday, outlined what will happen.

Kerr said the plan is to have signs showing the city field operations complex along Albemarle Avenue is named in honor of Evans and to have a plaque placed inside the city environmental services building along Thorpe Road.

Kerr also said the plan is to have two municipal identification signs for the operations complex. One will be at Albemarle and Grand avenues and the other will be at Atlantic Avenue and Spruce Street.

The second sign will be across from two state historical markers. One marker honors the sanitation workers who walked off the job in 1978 and the other honors the Rev. Martin Luther King Jr.

Kerr said the final part of the plan is to have a dedication ceremony timed with National Public Works Week, which is from May 17-23.

The strike protested the arrest and suspension of Evans, an African-American, for allegedly stealing a man’s suit left out on his garbage route in the predominately white Englewood residential area.

The striking sanitation workers were fired by the municipal government on July 25, 1978, but were reinstated on July 31, 1978.

Evans, of Whitakers, was convicted in Rocky Mount District Court of committing misdemeanor larceny, but eventually he was cleared by a jury in Nash County Superior Court.

Evans resumed working for the sanitation department and remained on the job until his retirement, reportedly never resentful about what had happened to him in 1978.

The strike also became a catalyst for the voting rights lawsuit a group of African-Americans filed in 1983 that eventually led to a fairer and racially balanced ward system for African-Americans to win elections to positions on the City Council.

In October 2018, the council approved a resolution recognizing the 40th anniversary of the strike.

In October 2018, the Phoenix Historical Society also held an event at the Booker T. Washington center recognizing the anniversary of the strike.

In November, the council financially recognized striking sanitation workers and their families with restitution and decided to name the field operations complex in honor of Evans.

Monday’s council work session is set for 5 p.m. in the conference room adjacent to the council chamber.

That application calls for renovating a vacant building off Blue Hawaiian Drive.

Armorock makes corrosion-proof precast structures for sewer and wastewater systems. The company is based in Boulder City, Nev., which is southeast of Las Vegas.

A memorandum from Assistant City Manager Natasha Hampton to Small-Toney, in advance of Monday’s work session, said the total cost of modifications and improvements to Armorock’s future Rocky Mount location will be about $2.3 million.

Hampton said the project is expected to result in roughly 41 full-time jobs.

Hampton said Armorock is requesting $300,000 from the state Commerce Department for the renovations.

Hampton said the Rocky Mount-based Carolinas Gateway Partnership is going to arrange for a local cash match of at least 5 percent of the grant request amount or $15,000. She said the city’s share of the grant match will be $7,500.

The work session agenda also calls for City Budget and Evaluation Manager Kenneth Hunter to provide a report of revenues and expenditures for the second quarter of fiscal year 2020.

The council also is scheduled to go into closed session, citing the need to discuss economic development and attorney-client privilege as the exemptions to the state Open Meetings Law.

The council is going to follow with the regular council meeting, which is set for 7 p.m. in the council chamber.