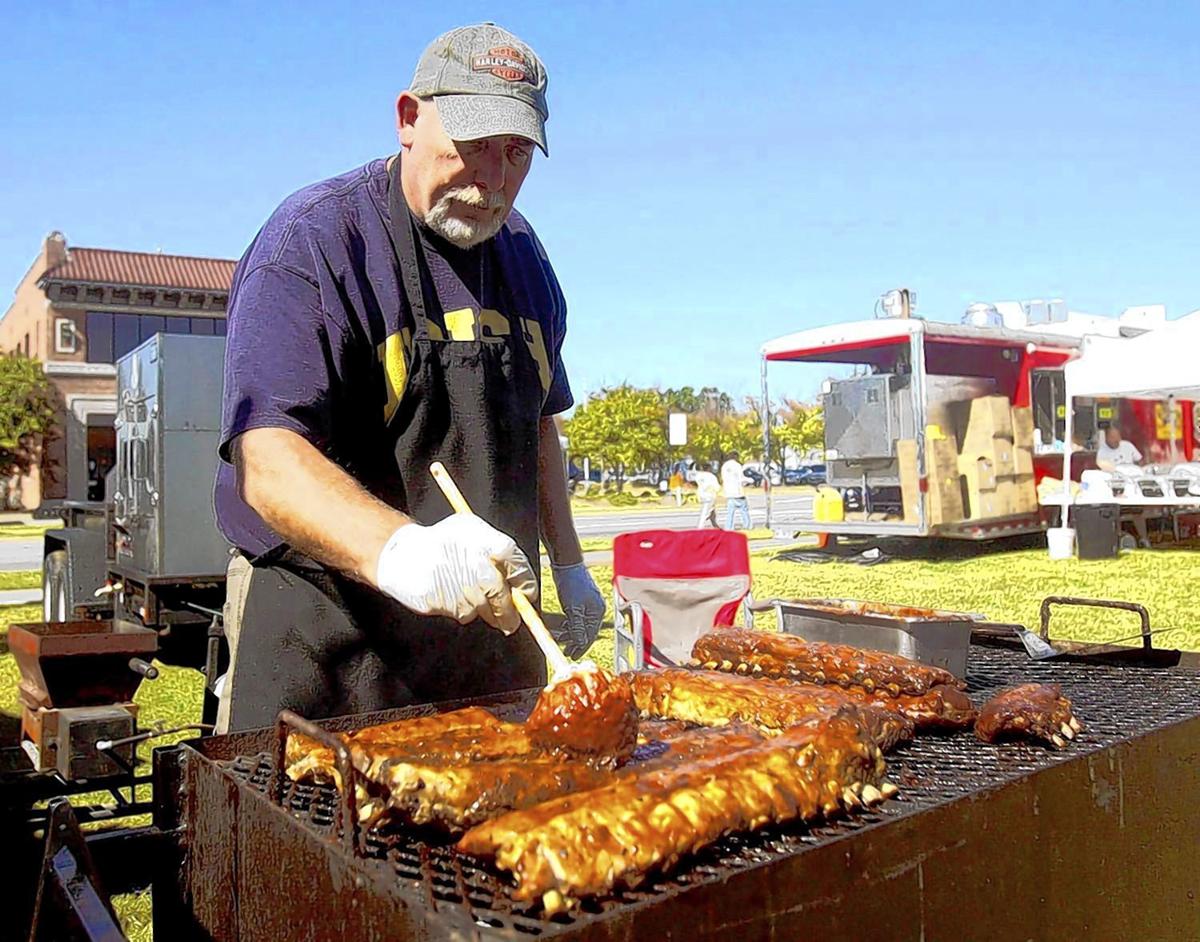 Tim Hommel adds sauce to baby back ribs on Oct. 13, 2012, during the fifth annual Eastern Carolina BBQ Throw Down in downtown Rocky Mount. 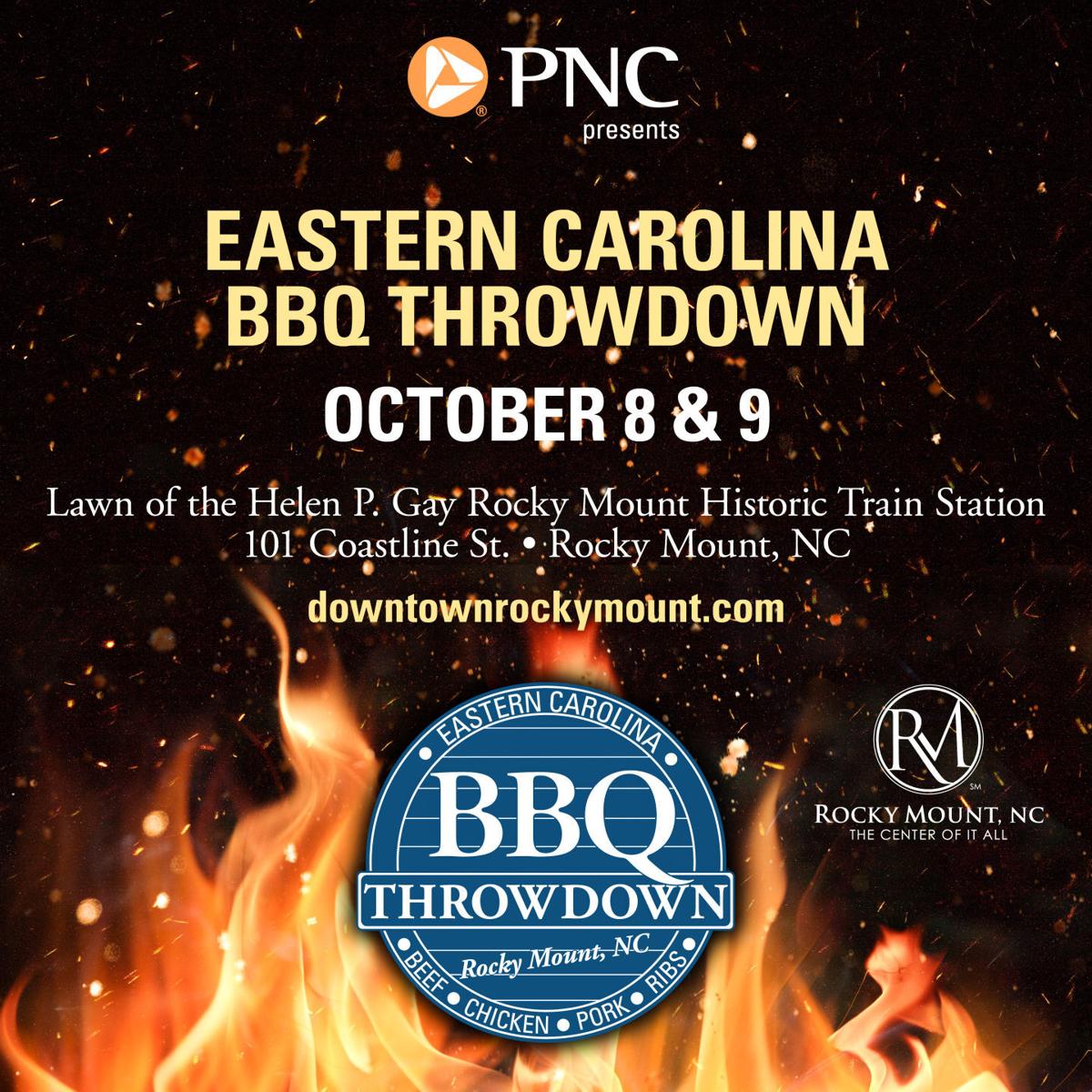 After having been canceled last year due to the spread of the coronavirus, the annual Eastern North Carolina BBQ Throw Down is returning to downtown.

The event is set for Friday evening and a large part of the day on Saturday on the lawn of the Helen P. Gay Historic Rocky Mount Train Station.

The event is authorized by the Kansas City Barbeque Society and serves as one of the gateways into the nonprofit organization’s larger endorsed contests.

Rocky Mount Area Chamber of Commerce President and CEO David Farris told the Telegram he and his team are thrilled about what is coming Friday and Saturday.

“That’s, I think, a real turning point in our getting back to normalcy,” Farris said. “And it’s good for our economy.”

Farris was quick to emphasize that there will be, as there has been in the past, a combination of great entertainment and amazing food.

“We’ll have a lot of people coming into Rocky Mount for that event,” Farris said. “Vendors will like it. Our downtown merchants will love it.”

Interim city Communications, Marketing and Public Relations Director Jessie Nunery told the Telegram in an email that the kickoff of the event will be at 5 p.m. on Friday.

Nunery said the scene will include a Kids Zone, food vendors, a beer garden and at 7 p.m. a musical performance by On The Edge.

A list provided to the Telegram by Nunery showed that at least 30 barbecue cooking teams with colorful names are on the list.

There will be Kansas City Barbecue Society-certified judges from across six states, with the judging to be from noon to 2 p.m., Nunery said.

Additionally, he said there will be a People’s Choice part of the event from 1:30-3 p.m., during which the public can purchase tickets to sample the competition barbecue and vote for which one they believe to be the best.

Nunery also said that on Saturday there will be musical performances by Cooper Greer at 11 a.m., the Will McBride Group at 1 p.m. and Trial By Fire at 3 p.m.

The Kansas City Barbeque Society can be traced back to 1985 and is the world’s largest organization of barbecue and grilling enthusiasts with roughly 20,000 members worldwide.

The Eastern North Carolina BBQ Throw Down can be traced back to 2008 and started as part of what had been the Down East Festival that attracted scores of people to downtown.

The Down East Festival was started in 1983 to broaden community interest in the arts, increase public awareness in downtown revitalization efforts and foster community spirit.

As for the origin of the Eastern North Carolina BBQ Throw Down, Farris told the Telegram he and banker Mike Bryant were guests of Cummins Rocky Mount Engine Plant to travel to Memphis, Tenn., to see the Memphis in May championship barbecue cooking contest.

Although there was no way locally there could be such an event on the level of the colossal one held in the Mid-South region, Farris said, “We started looking at it and thinking: ‘Well, we love barbecue in Rocky Mount and in eastern North Carolina.’

“And we talked to the city about it,” Farris said of municipal officials being approached about having a barbecue gathering. “And the city picked up that ball and ran with it — and really has done a great job.”

Mayor Sandy Roberson was asked by the Telegram about his thoughts about the upcoming return of the Eastern North Carolina BBQ Throw Down and what it will mean for downtown and the community.

“Well, let me tell you something: I’m a frustrated pig barbecue cooker,” Roberson replied in a good-humored tone.

Roberson said he keeps saying to himself that every year he will join the cookoff.

“But every year it comes. It slips up on me — and this year I am delighted to be able to go eat all these fine pieces of barbecue. And I’m excited about it. I’m super excited it’s going to be downtown,” he said.

“Damn the COVID and full steam ahead,” he said.

Roberson said of the event overall, “What it does is I think it creates an awareness of the potential that we have downtown — and that’s what we really need to be focused on.”

Kevin McLaughlin, who has the Larema Coffee House at the Five Points intersection, told the Telegram via texting, “We look forward to seeing more people out and about getting to experience our beautiful downtown.”

McLaughlin said his business will be open and excited to serve the community, both residents and visitors alike.

Moe Deloach, who has the Moe & D’s Restaurant, Grill & Bar along South Church Street, told the Telegram of the situation having been difficult for the past year and said he loves things happening everywhere in Rocky Mount and especially downtown.

Deloach is angling in to take advantage of his business being in proximity to the scene of the Eastern North Carolina BBQ Throw Down. More specifically, Deloach said the plan is to have a block party with food, games and music in the parking lot alongside his business on Saturday evening after the close of the goings-on at the train station lawn.

“So it’s going to help out a lot, being that people are already going to be downtown,” he said of the impact on his business.

To see the list of the barbecue contestants, read the online version of this story at www.rockymounttelegram.com.