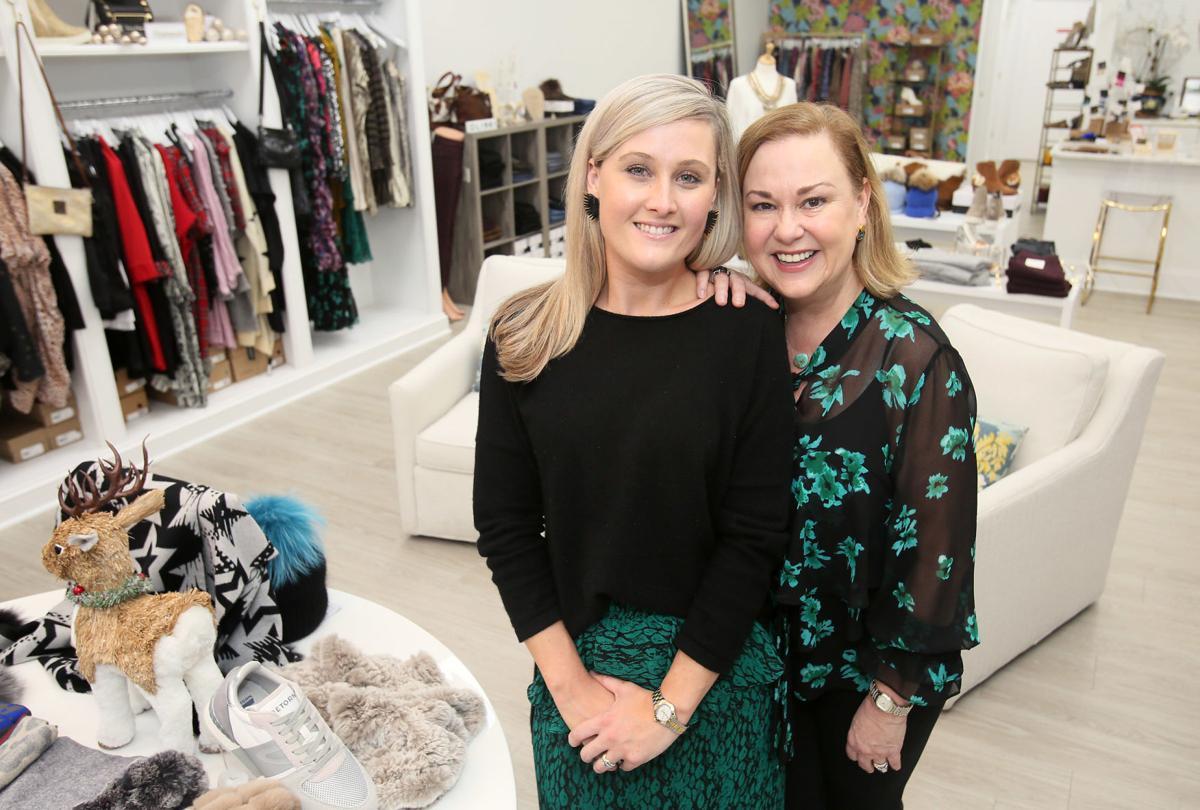 Amanda Blanton, left, and her mother, Jerri Blanton, co-owners of Clair de Lune, pose for a portrait Tuesday at their new boutique at the Shoppes at Stoney Creek. 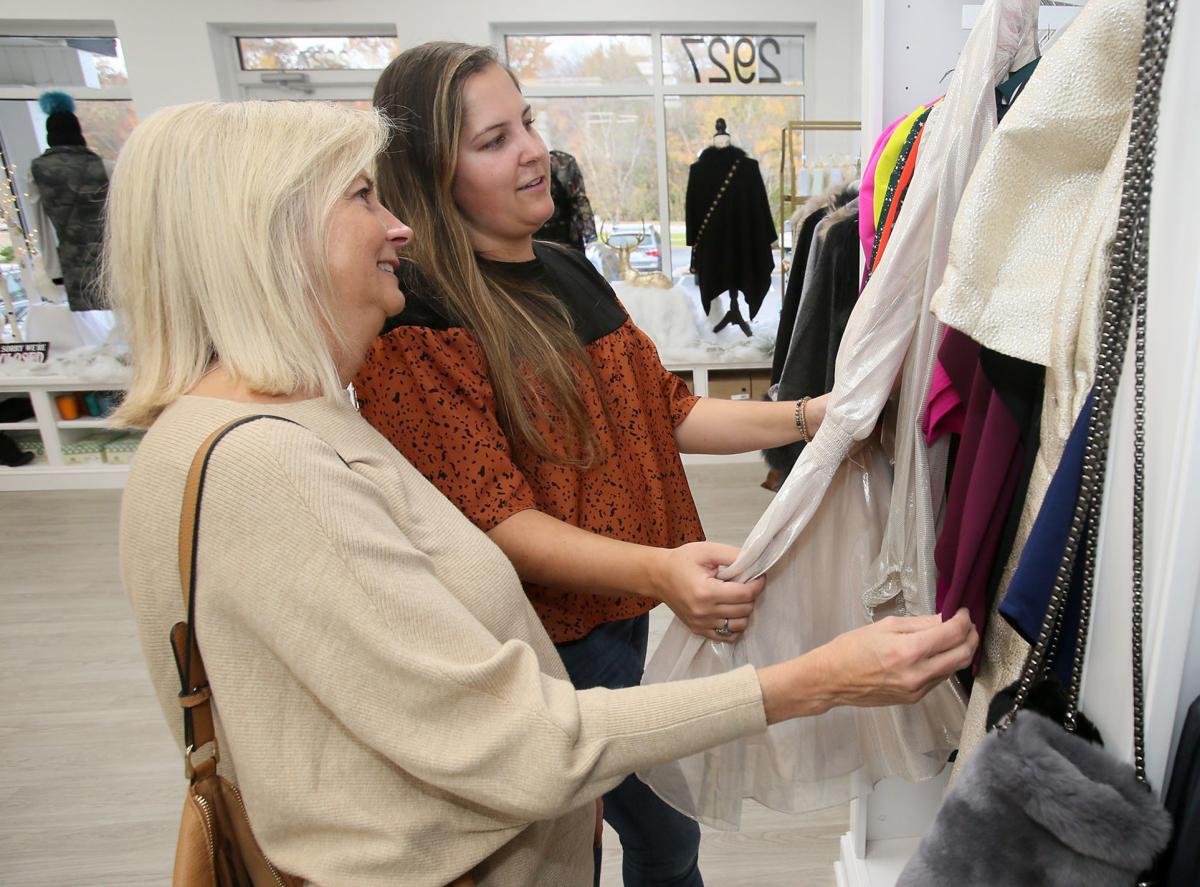 Sherry Roberts, left, and her daughter, Eliza Roberts, look at clothing on Tuesday while shopping at Clair de Lune at the Shoppes at Stoney Creek. 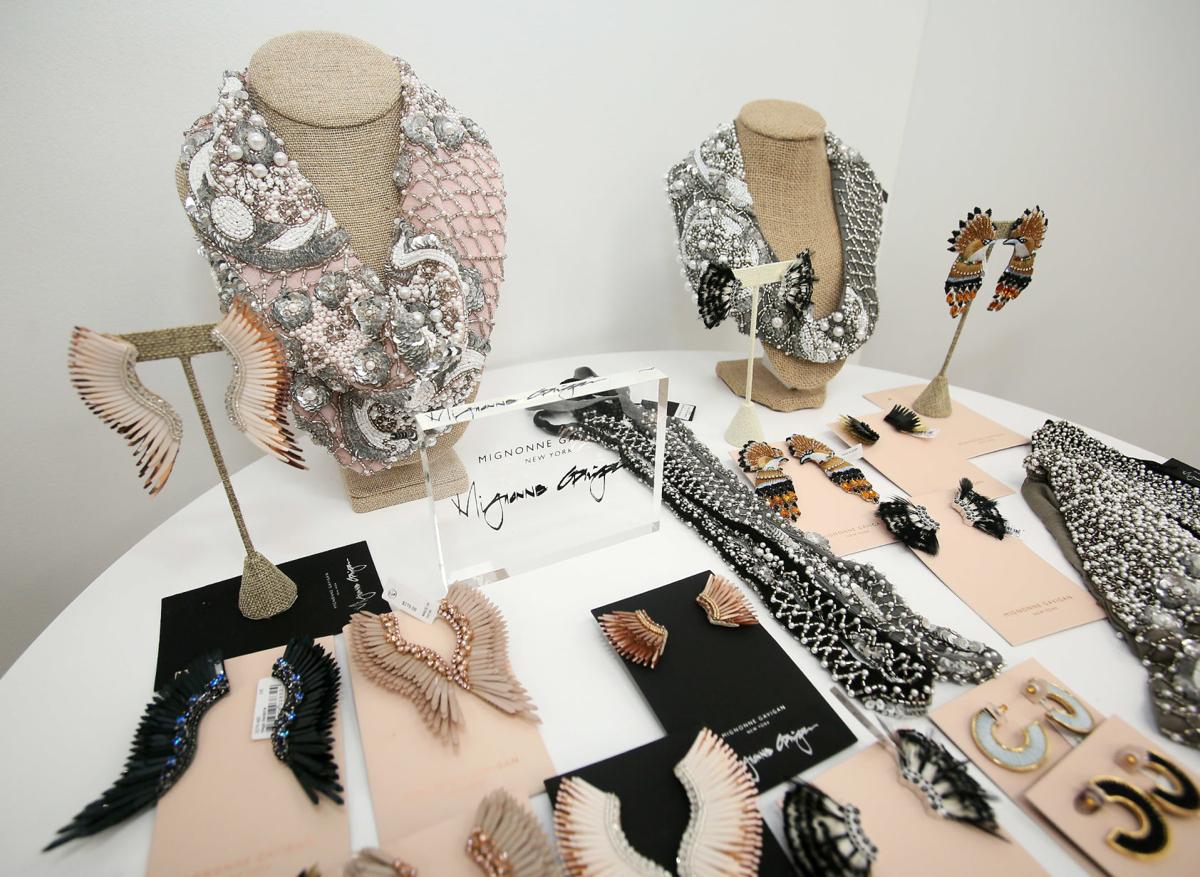 A display of scarf necklaces and earrings by Mignonne Gavigan on Tuesday at Clair de Lune.

Amanda Blanton, left, and her mother, Jerri Blanton, co-owners of Clair de Lune, pose for a portrait Tuesday at their new boutique at the Shoppes at Stoney Creek.

Sherry Roberts, left, and her daughter, Eliza Roberts, look at clothing on Tuesday while shopping at Clair de Lune at the Shoppes at Stoney Creek.

A display of scarf necklaces and earrings by Mignonne Gavigan on Tuesday at Clair de Lune.

After working in fashion merchandising and for an interior designer in Raleigh, Amanda Blanton has returned to Rocky Mount to open a boutique, Clair de Lune.

Blanton, 29, a 2013 graduate of Meredith College, has been in business for approximately seven weeks in space she extensively renovated at the Shoppes at Stoney Creek in the 2900 block of Zebulon Road.

Clair de Lune is just steps away from where Blanton had started working in retail for Susan Sabiston, who had owned what was Stephanie’s.

“Growing up at a very young age, I was obsessed with fashion,” Blanton said. “I saw it as an art, more or less — and the textures, the colors and fabrics is what intrigued me.”

Blanton said she started working at Stephanie’s when she was 16 and said that as a student at Meredith, she majored in fashion merchandising and minored in business and French.

Blanton said her résumé includes having worked at Monkee’s and Uniquities when she was a Meredith student and worked at Nest Interiors after she graduated.

She said she considers Rocky Mount near and dear to her heart and added, “I’m a big homebody.”

She also said she sees a pattern of young people from Rocky Mount returning to live in the city.

And she said she likes the slower pace, the lighter traffic and the tight-knit sense of community in Rocky Mount compared to the “zoom-zoom-zoom” life in Raleigh.

As for where she got the name for the boutique, she said she has long had a fascination for astronomy and the moon and said Clair de Lune stands for light of the moon or moonlight.

She said she seeks to offer both forward-thinking and traditional clothing and accessories and said the shoppers are quite diverse.

Blanton has been relying on social media, specifically Facebook and Instagram, to help get the word out about the boutique.

“Actually, we’ve done zero advertising,” Blanton said. “I started an Instagram page before we opened up. And the majority of the customers that come in recognized us through the Instagram page, so that’s how they knew about us.”

Blanton said the boutique being in the same business center with the popular Barley and Burger restaurant helps.

“What I tell people is you can go grab a burger, get your nails done, get your hair done and then come shop with us,” she said.

Blanton said she has been receiving shoppers from Tarboro, Wilson and Raleigh.

After a Telegram reporter recently stopped by the boutique to interview her, the place soon began filling up with shoppers, including Rocky Mount resident Sherry Roberts and her daughter Eliza Roberts of Charlotte.

The mother and daughter are friends of the Blanton family.

The Roberts family lived for a time in the Wilmington area before returning to Rocky Mount, so their entering Clair de Lune was also a bolt-from-the-blue reunion.

“Everybody is talking about it in town,” Sherry Roberts said of the boutique. “It looks great.”

Eliza Roberts said, “It’s a great setup — and it’s so bright in here.”

“And we’ll be back a lot,” Sherry Roberts said.

Assisting Blanton at Clair de Lune is her mother, Jerri Blanton, who was once an educator in Nash County.

Amanda Blanton said of her mother, “She herself has never worked in retail, but you would never know it because she’s such a people person.”

Jerri Blanton said, “Amanda wanted to move back to Rocky Mount because she sees good things happening in Rocky Mount — and she just felt this was really needed here. In Raleigh, the market is saturated with clothing stores. They’re everywhere.

“And she just thought this was the best location to do it because it was needed,” Jerri Blanton said.

Four high school students are working at the boutique.

Clair de Lune is located at 2927 Zebulon Road and is open from 10 a.m.-5 p.m. Tuesdays through Saturdays.

The boutique can be reached by phone at 252-200-4862 and has a website at www.clairdelunerockymount.com