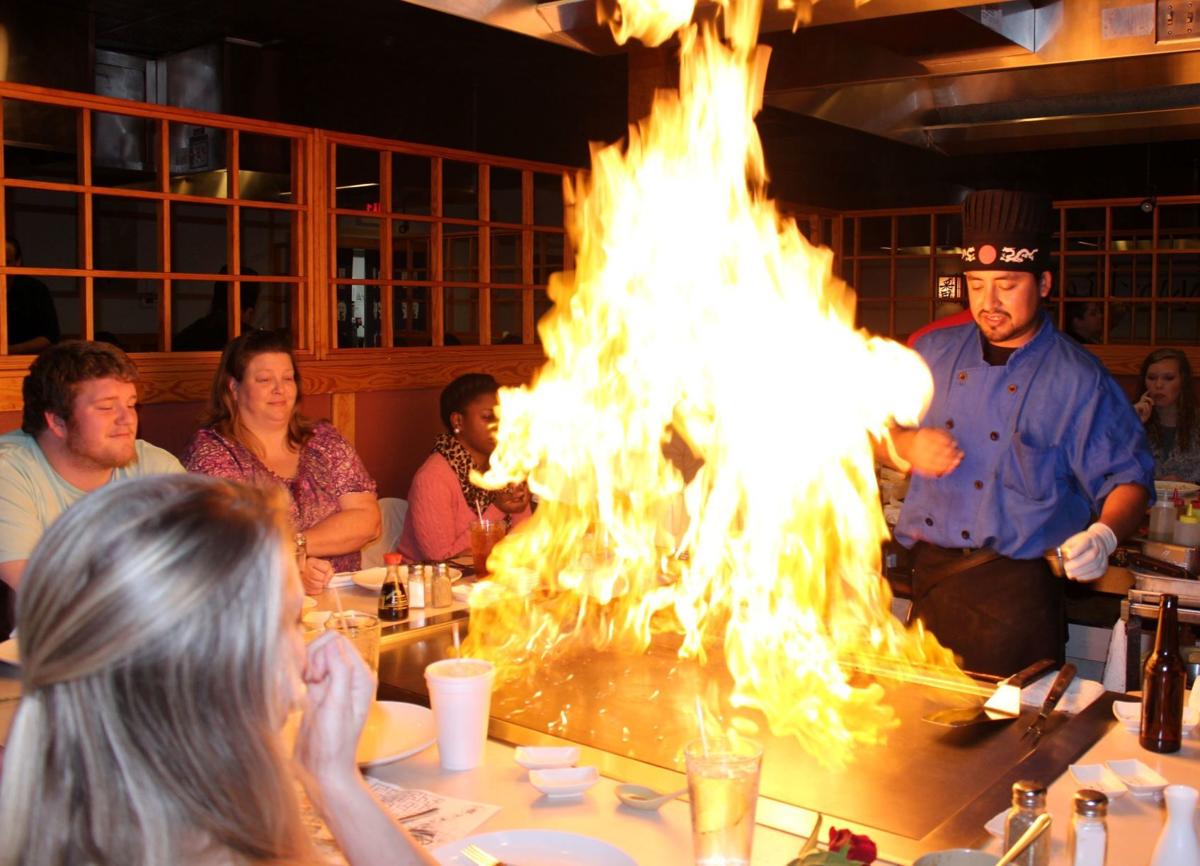 A chef entertains diners at Ichiban Japanese Steakhouse. Below, chefs prepare meals for customers at the restaurant. 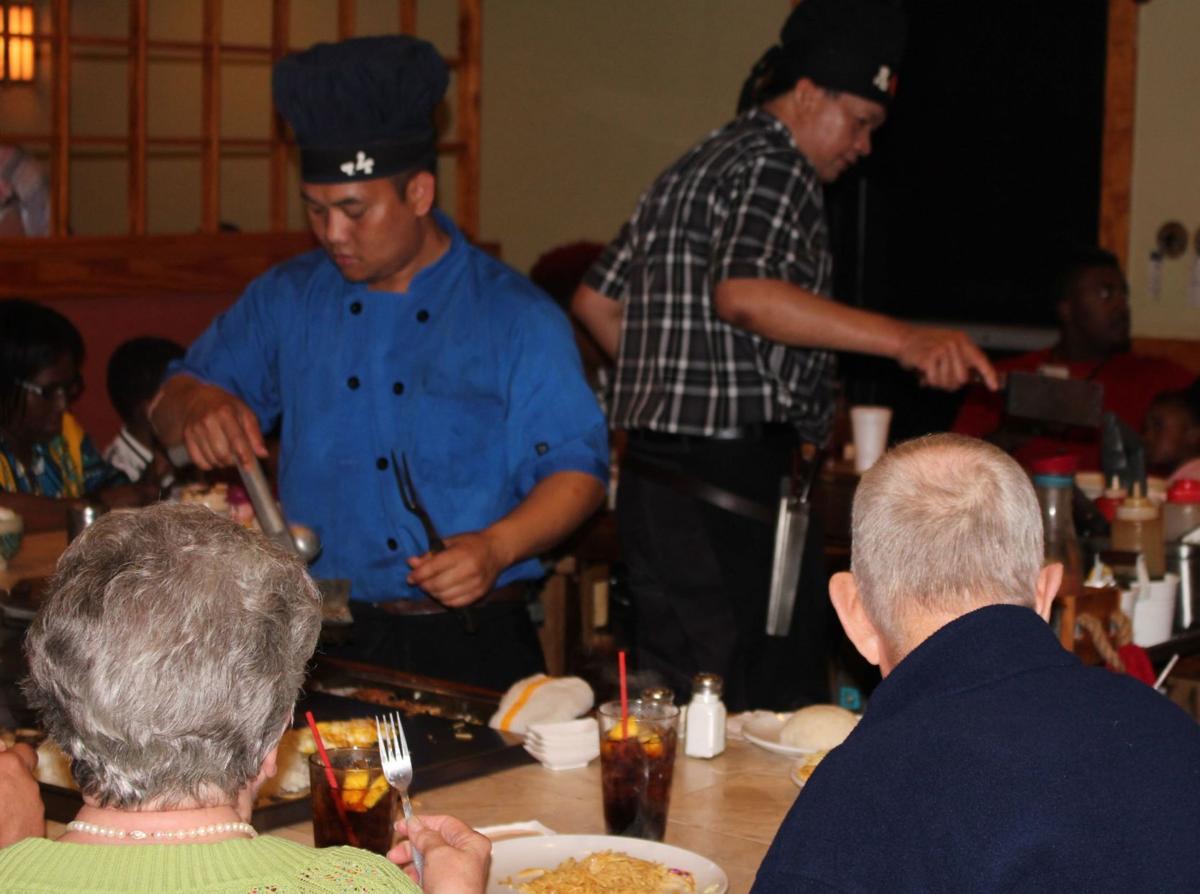 A chef entertains diners at Ichiban Japanese Steakhouse. Below, chefs prepare meals for customers at the restaurant.

In the aftermath of recent media coverage and social media posts about the Ichiban Japanese Steakhouse, the restaurant owner faces a dilemma about how to handle the impact that actions of his employees have had on his business.

On July 16, a television station released information about the actions of restaurant Manager Christen Colbert, who posted sexual images on OnlyFans, a subscriber-based site available only to people who pay to view the content.

Normally, these actions would have fallen with the realm of private behavior. However, because the images involved the use of a banana and were posted from inside the restaurant, one viewer contacted the television station with purported concerns over food safety.

The revelation came on the heels of social media posts by a former employee that included pictures that apparently were designed to harm the reputation of the restaurant. These images, including ones of salad in what was said to be a trash can, were staged or taken out of context by a disgruntled employee who had been hired for a second time, Joon Lee, the owner of the restaurant, told the Telegram. The images were posted earlier in the same week that news of the OnlyFans video broke.

“That was a rough week,” Lee said Monday in an interview.

Since these actions, Lee said that his business has dropped about 40 percent, and he is concerned about the effect the situations are having on the business and his employees. He is trying to be transparent, he said, hoping that others will understand the situation he faces.

The effect of the social media posts is a big concern for him right now, he said. As far as the ”trash can” images go, Lee said that his restaurant, like many, uses large storage containers for food storage. However, he uses separate containers for food and trash. To avoid confusion in the future, he is buying new color-coded containers so that the distinction is clearer to an outside observer.

“This employee went around taking pictures before she left and made up things to put on social media,” Lee said. “Just about every business has a love/hate relationship with social media. This is a prime example. One disgruntled employee can cause so much havoc. For her, this might be a game.”

The restaurant has been cleared by the health department and there is no reason for concerns for food safety, Nash County Health Director Bill Hill said last week in an interview.

“We went to the restaurant on July 12 and found some minor issues that are common in restaurant situations,” Hill said. “Then we got a call that Wednesday about the banana debacle, so Environmental Health went back that Wednesday to check things out again. Then WRAL contacted us, and they were like a dog with a bone, so we went out again on Friday.”

Hill said that from a food standpoint, there were no issues that reach the level of a public health concern.

“The only questionable issue involving the banana would have been if there were any indication of deliberate food tampering. If so, that could be a health and a law enforcement issue. We did discuss this issue with the Nash County Sheriff’s Office and our office determined that this situation did not reach that level of concern,” Hill said.

Nash County Chief Deputy Brandon Medina confirmed that there were no indications of anything illegal about the situation.

The restaurant currently has an A rating from the county health department. Lee said the restaurant has had that rating since Colbert became manager 15 years ago.

Lee is especially troubled about how the situation with Colbert will be resolved. For now, she is on leave and is staying away from the restaurant. But Lee said he is hesitant to fire her.

“I am a firm believer that what is work is work and what is private is private. And I think we have all done things in our life that we regret,” he said. “I am just not sure what will happen in this situation. I have some decisions to make, and Christen does, too.”

“There are many people out there who do not condone Christen’s actions. I don’t condone them either but also feel that I need to stand by her as she has stood by me,” Lee said.

Lee said Colbert has been a hard worker and has proven herself often over those 15 years.

“She has worked here since she was 20 and she has treated this place as her own restaurant. She has been a loyal employee. I know the best thing for my business would probably be to fire her. If she were a regular employee, there would not be any question about firing her for something like this that involves the reputation of the restaurant. But I also believe in second chances,” Lee said.

However, Lee is also wrestling with the effect the situation is having on his restaurant and his other employees.

“I am trying to find a middle ground where the situation does not hurt Christen but also where the situation also does not affect my business and my other 35 employees,” he said. “I am hoping that my customers will have it in their hearts to be compassionate about the situation and come back and support the restaurant. I hope that our food and our service and our team will bring them back.”

“I would like to apologize for the harm I caused Ichiban and my boss/work family, Joon Lee. I never meant to hurt them,” the post said. “Everyone who knows me knows I love my job, my guests and my hard-working employees. I would never purposely harm them.

“I have put 15 years of my life and energy into Ichiban. It’s my second home. I appreciate all of the support, love, texts and Facebook messages. I ask that you guys show Ichiban that same love and support. The employees have children to take care of and bills to pay. Don’t punish them for my mistake,” the post concluded.