Log In Sign Up
You have permission to edit this article.
Edit
News
Opinion
Sports
Features
Obits
Multimedia
Classifieds
e-Edition
Our Sites
Extras
Share This
1 of 4 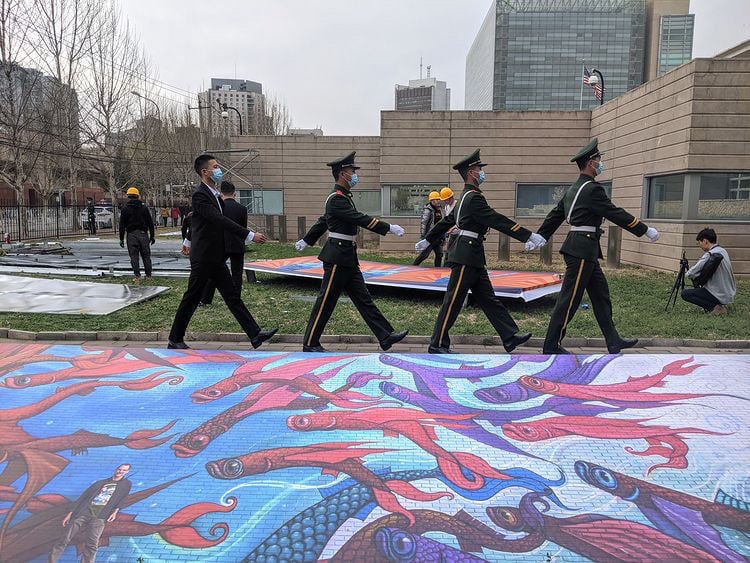 ‘School of Flying Fish’ by Greenville artist Scott Eagle is being exhibited in China as part of the “Art for the People” exhibit. The same mural can be seen in Greenville. 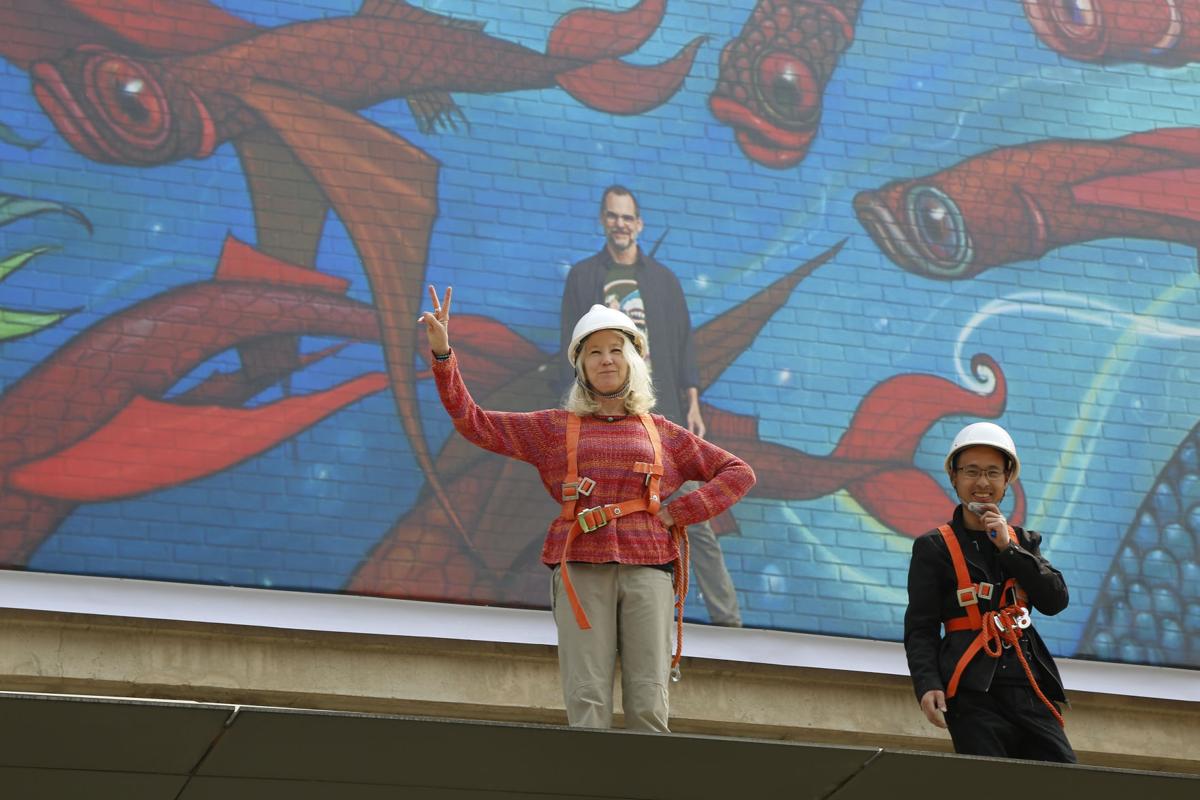 Sanny Wroblewski, a multimedia specialist at the U.S. Embassy in Beijing, center, stands in front of Eagle’s mural, which is on exhibit in China for six months. 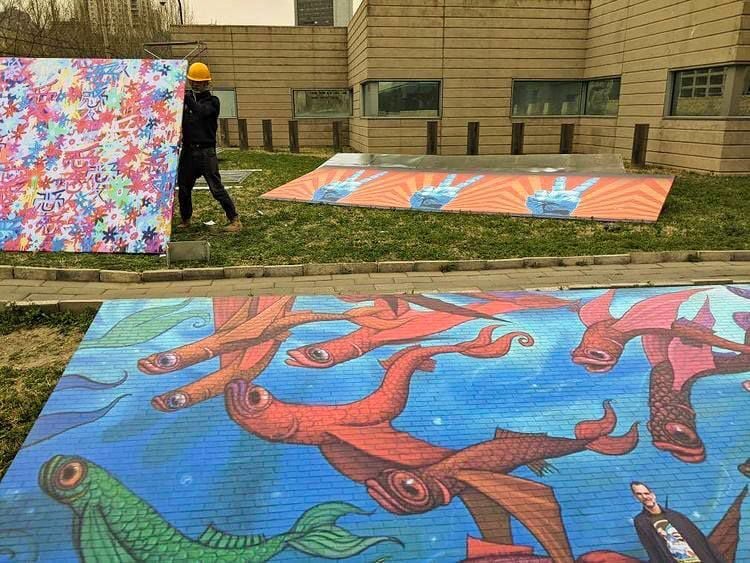 Eagle’s mural, foreground, is among nearly two dozen that are part of a first-of-its kind exhibit on the exterior walls of the U.S. Embassy in Beijing, China. 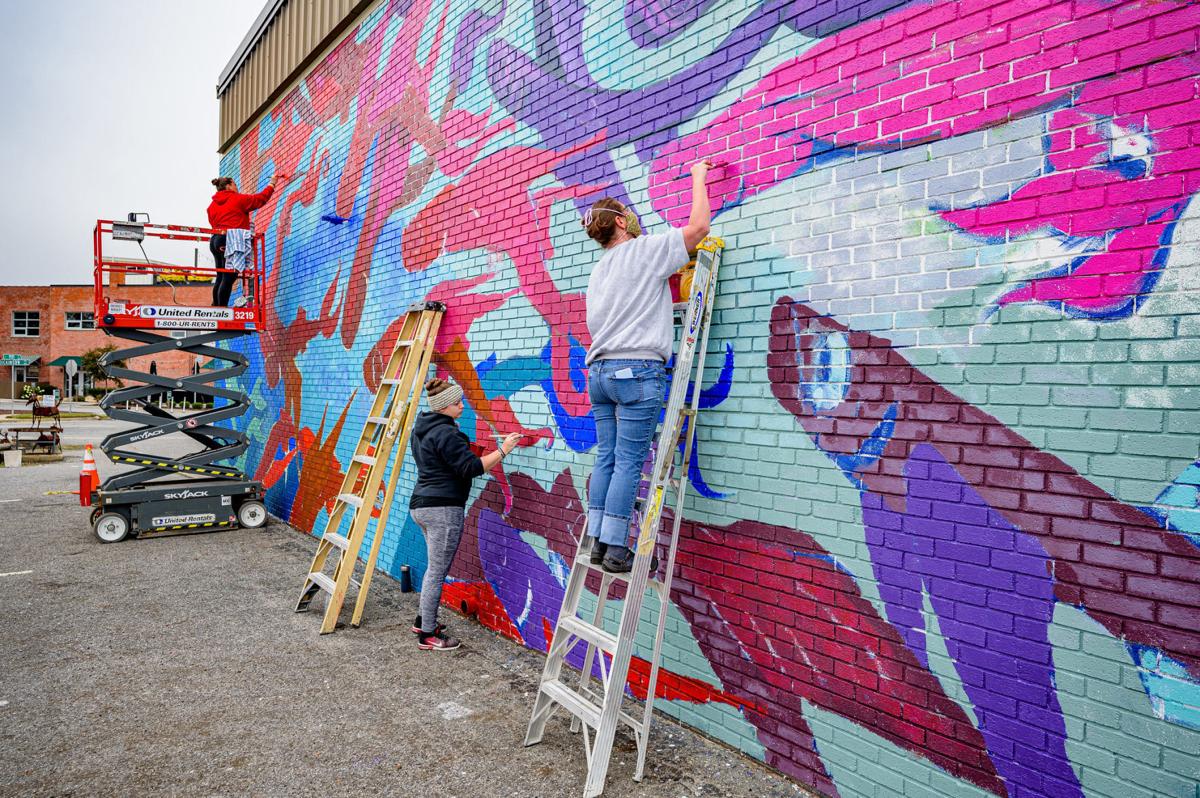 Volunteers assist in the painting of Scott Eagle’s ‘School of Flying Fish.’

‘School of Flying Fish’ by Greenville artist Scott Eagle is being exhibited in China as part of the “Art for the People” exhibit. The same mural can be seen in Greenville.

Sanny Wroblewski, a multimedia specialist at the U.S. Embassy in Beijing, center, stands in front of Eagle’s mural, which is on exhibit in China for six months.

Eagle’s mural, foreground, is among nearly two dozen that are part of a first-of-its kind exhibit on the exterior walls of the U.S. Embassy in Beijing, China.

Volunteers assist in the painting of Scott Eagle’s ‘School of Flying Fish.’

GREENVILLE — An ECU art professor is off to a flying start as a muralist.

Scott Eagle, an associate professor of painting and drawing, completed his first mural, “School of Flying Fish,” in Greenville, where it was dedicated in February. This month, the mural was reproduced for an exhibit in China.

The same larger-than-life, fantastical fish that appear along one side of The Art Lab building on Dickinson Avenue can now be seen outside the U.S. Embassy in Beijing.

Eagle’s work is among nearly two dozen murals selected from American artists for “Art for the People,” a first-of-its-kind exhibit that decorates the exterior walls of the embassy compound.

The artist had no idea when his design was approved by Greenville’s City Council last fall that it would also be viewed this spring in the world’s most populous city.

“If I would have known it was in the works, I probably wouldn’t have painted as well,” he said, “because it would have been too much pressure.”

A Winston-Salem native, Eagle has undergraduate and graduate degrees from East Carolina University, where he has been on faculty in the School of Art and Design for more than two decades. Although he had seen his former students complete murals, he had never taken on a work of this scale himself until now.

“Our job is to teach our students how to paint but then ultimately what are they going to do when they go out into the world?” Eagle said. “This (painting murals) is something that’s become really popular. I thought, well, I needed to know how to do this.

“Whenever I was finally given this opportunity to do a mural, it was way harder than I thought it was,” he said of the work, which took nearly 170 hours to complete.

Sanny Wroblewski, a multimedia specialist at the U.S. Embassy in Beijing, became familiar with Eagle’s work when both were art students at ECU. When she learned about his mural, she thought it would be a good fit for “Art for the People,” an exhibit showcasing street art from the United States.

On view for the next six months, the exhibit is designed to highlight the universal value of freedom of expression.

“I have always admired Scott’s work, and I feel so fortunate to have his consent to use his work here,” Wroblewski said. “This is the first time we’ve done something like this at the embassy, and we want to be sure to work with artists that represent a range of political views and communities from across the country.”

Although Eagle, whose work has been featured in The New York Times and The Oxford American, has had paintings and illustrations to be exhibited internationally, he initially approached Wroblewski’s invitation with some uncertainty.

“I get so many proposals like that that never pan out. I took it with a grain of salt,” he said. “I said, ‘Yeah, sure I’m interested. But I didn’t expect it to happen.”

He sent Wroblewski several images of his work, including a picture taken by photographer Ryan O’neal Harper that shows Eagle standing in front of the mural. The image with the artist at the center is the one that was ultimately selected for the exhibit.

Eagle acknowledges that it is a bit surreal to see a photograph of his painting and himself in the same frame as members of the Chinese military.

While “School of Flying Fish” was never intended to include an image of the artist, the original concept for the work included more than fish. Absent from the mural is a barn swallow that was the inspiration for the painting.

“Several years ago, I came up with this idea of, ‘What if a flying fish fell in love with a barn swallow?’ because I happened to notice that they’re the same shapes,” Eagle said. “My work unfolds for me sometimes in a way that I can’t anticipate. It’s kind of like dreams, where it’s like, ‘Where did that come from?’”

Author Jeff VanderMeer, who selected Eagle to design covers for several of his books, has Eagle’s flying fish and barn swallow painting in his home. It was featured this month in a photograph in The Guardian, which accompanied a feature on VanderMeer.

“Good news and also bad news always seems to come in groups and waves,” Eagle said. “It’s never spread out evenly and nicely so I can anticipate it coming. It’s kind of like boom, all at once. It’s unexpected on the scale.”

Wroblewski said “School of Flying Fish” has been well received in Beijing, where she has been giving tours of “Art for the People.”

“Everyone loves Scott’s piece,” she said. “‘School of Flying Fish’ is so appropriate here in China since fish are considered a sign of good fortune.”

Eagle feels lucky to have had his mural selected for the exhibit, which includes the work of well-known artists David Amoroso and Chris Riggs.

“I tell my students, ‘You should be concerned if people just walk past your work,’” he said, ‘if consistently people just don’t even see what you’re doing.’”

“I’m hoping that people see this image and react to it in a visceral, personal way,” Eagle said. “It’s this tremendous honor. I just feel incredibly fortunate.”

Artist Scott Eagle's work is scheduled to displayed this summer at Pitt Street Brewing Co., 610 S. Pitt St. The exhibit will include a series of images of flying fish that he completed as part of a project with students at ECU prior to painting "School of Flying Fish." For more information about his work, visit scotteagle.com.