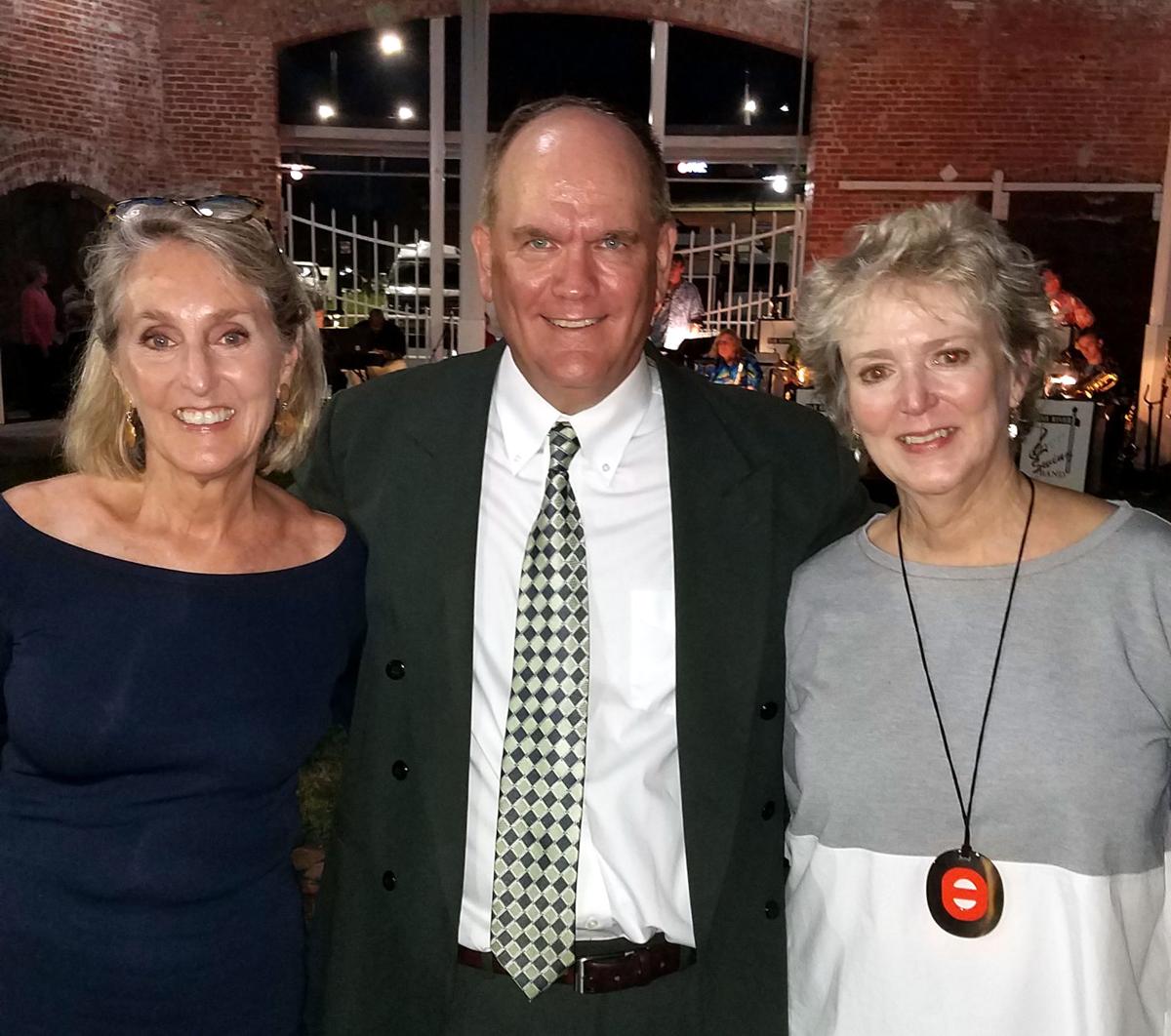 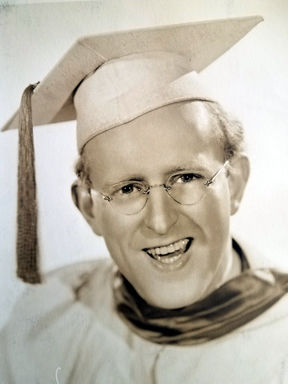 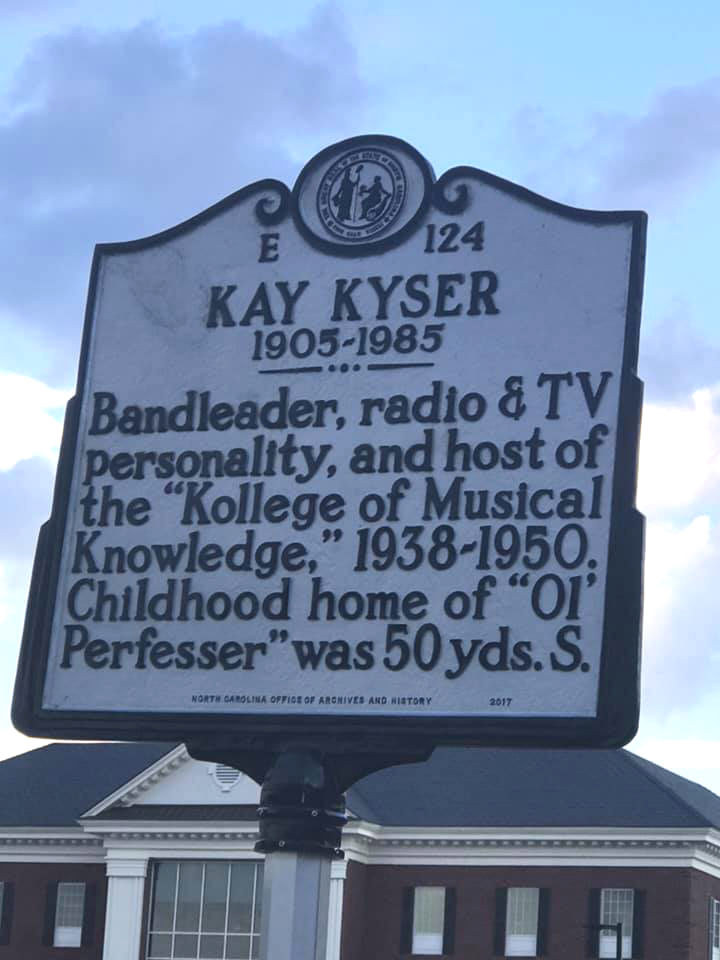 He had a weekly radio show with an audience bigger than the Super Bowl’s.

He received two stars on the Hollywood Walk of Fame. He led the biggest-selling band of the 1940s. And he performed more shows for the troops during World War II than Bob Hope did.

But when Clifton Barnes posted Kay Kyser's picture on a Rocky Mount Facebook page, some people wrote that they had never heard of the Rocky Mount native — despite the fact that Kyser was able to proudly work "Rocky Mount, North Carolina" into his seven feature films.

Others on the Facebook page lamented how Kyser, who dropped out of show business in 1950, had been forgotten — not just around the country but right there in his hometown.

To help alleviate that problem, Barnes, a Rocky Mount native who now lives in Cary, set out to secure a permanent state historical marker in Rocky Mount at the site of his family home, which stood on Sunset Avenue near Church Street, behind First United Methodist Church.

His detailed application was approved by the selection committee on the first read-through — something state officials said is nearly unheard of as only 8-10 markers are approved each year out of hundreds of applications. It is also unusual for individuals not representing a group or organization to apply for historic markers.

Barnes put together a dedication ceremony at the First United Methodist Church and helped coordinate a celebration at the Imperial Centre.

As a result of his efforts, Barnes has been awarded a 2019 Grand Award from the Washington, D.C., area-based Communications Concepts through its Awards for Publication Excellence competition. It’s the highest honor the group gives.

"I am happy to receive the award if for no other reason than to help keep Kay Kyser remembered in his beloved hometown," Barnes said, noting that Oct. 5 is the first anniversary of the historic marker’s unveiling. "It was challenging but it was also the most rewarding thing I've ever done. The laughter I heard and the tears I saw and the heartful thanks I received will be remembered forever."

With the support of the staff at the University of North Carolina library, who oversee the Kay Kyser Collection, Barnes secured memorabilia from Kyser’s career that was displayed at the dedication, at the celebration and at Braswell Memorial Library. It is unusual that pieces of such collections are allowed outside the building.

Culling through hundreds of photographs, many of them rare, Barnes put together a 305-slide PowerPoint presentation of Kyser’s career and showed it prior to the dedication ceremony and at library for several months.

The staff at UNC-TV, a public television station that Kyser helped form, said that Barnes’ greatest contribution may have come by helping save a rare Kyser documentary and TV interview conducted by UNC System President William Friday.

Barnes wanted to get a DVD made of the program to show at the celebration, but when UNC library staff went to make a copy, the tape was ruined — unusable. Instead of dropping the idea, Barnes went to UNC-TV, the original source of the tape, which had the only other known copy of the show.

The program had not been seen in years, so it had not been transferred to newer technology. It too had begun to deteriorate. While it was damaged, it was able to be salvaged and digitized. The technician said the program probably would have been lost forever had Barnes not been “so hard-headed” about getting a copy.

In addition to showing the program on a loop at the celebration, Barnes hopes to share the documentary and interview at Braswell Memorial Library in the future. Plans are in the works to show a Kyser movie and have a Kyser event at the library sometime in 2020.

For posterity, Barnes also videoed the marker dedication, which included Kyser’s two living daughters, who are from Chapel Hill, and the son of Kyser’s best childhood friend, who Barnes tracked down in Virginia.

Dr. Roger Gregory spoke about the relationship his father, Henry Gregory, had with Kyser. Gregory brought some personal items to share, along with touching and funny anecdotes.

Kimberly Kyser also gave an emotional speech about her father and his legacy.

Barnes enlisted the help of Ken Heath to emcee the event. Heath is a pastor and DJ who has a weekly radio program in Virginia. He plays old-time music on his program, which features Kyser’s theme song, "Thinking of You" as his show’s theme. Not only does Heath have a lot of knowledge about Kyser, he imitates Kyser, which he did briefly at the dedication ceremony and did in full costume at the Imperial Centre event.

Barnes was able to track down perhaps the only living person that appeared in his movies — Jean Phelps Veloz, now in her 90s, who danced as a teenager in the movie "Swing Fever." The California native provided a statement, which Heath read, about her fond memories of Kyser.

After the ceremony, everyone moved outside where Kevin Cherry, deputy secretary of the state Department of Natural and Cultural Resources and director of the Office of Archives and History, officially announced the marker as Kyser's daughters pulled the cover off to cheers from the people gathered.

“The Kay Kyser historical marker dedication in Rocky Mount was a blueprint everyone should follow,” said Rocky Mount native Randy Wheeless, who works in corporate communications for Duke Energy in Charlotte. “It paid homage to his life with period handouts and information and showcased speakers with first-hand knowledge of this historic figure.”

At the nighttime event at the Imperial Centre, in addition to the memorabilia and videos, the Tar River Swing band played big band music, including tunes made famous by Kyser.

The entire campaign took nearly two years for Barnes to pull off — between getting the marker, gaining support and interest in the events, dealing with a state funding delay, getting the location approved, coordinating schedules, getting the facilities and generally putting together the events.

“I appreciate all the help I received from those involved, especially the speakers at the event, those individuals in the state Office of Archives and History, Wendi Beck of the First United Methodist Church staff and emcee extraordinaire Ken Heath,” Barnes said. “It would not have been a success without them.”

While this is the top honor he has received, Barnes has now won an award in the Awards for Publication Excellence national competition 10 years in a row.

Barnes, a graduate of Rocky Mount Senior High and UNC-Chapel Hill, served as director of communications for the N.C. Bar Association for 15 years and before that, was sports editor of the then-Rocky Mount Evening Telegram.

Today he is a freelance writer, editor and web developer who owns several websites, including one that chronicles each UNC basketball game and another that aggregates Triangle-area sports.

Barnes is also credited with the idea for the Town of Cary's Hometown Spirit Award, given each year since 2009 to honor those who promote small town Southern values.

Along with his wife Andrea, he raises their 13-year-old son Will Griffin. Barnes is the son of W.C. and Lorraine Barnes of Atlantic Beach.