Get Started
You have permission to edit this page.
Edit 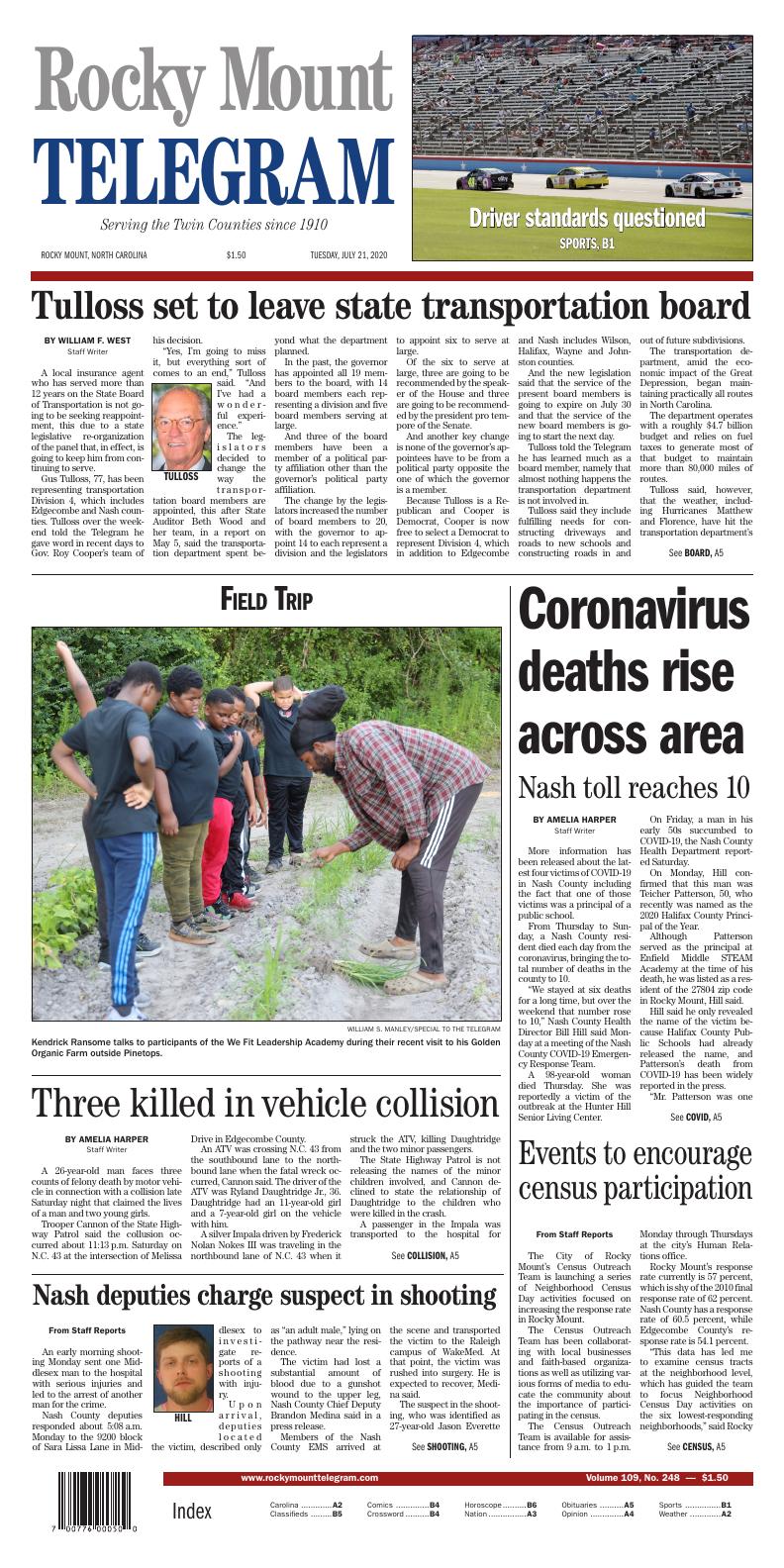 Gus Tulloss receives the Distinguished Citizen of the Year award on Feb. 2, 2016, at the annual Rocky Mount Area Chamber of Commerce meeting at Nash Community College.

A local insurance agent who has served more than 12 years on the State Board of Transportation is not going to be seeking reappointment, this due to a state legislative re-organization of the panel that, in effect, is going to keep him from continuing to serve.

Gus Tulloss, 77, has been representing transportation Division 4, which includes Edgecombe and Nash counties. Tulloss over the weekend told the Telegram he gave word in recent days to Gov. Roy Cooper’s team of his decision.

“Yes, I’m going to miss it, but everything sort of comes to an end,” Tulloss said. “And I’ve had a wonderful experience.”

In the past, the governor has appointed all 19 members to the board, with 14 board members each representing a division and five board members serving at large.

And another key change is none of the governor’s appointees have to be from a political party opposite the one of which the governor is a member.

Because Tulloss is a Republican and Cooper is Democrat, Cooper is now free to select a Democrat to represent Division 4, which in addition to Edgecombe and Nash includes Wilson, Halifax, Wayne and Johnston counties.

Tulloss told the Telegram he has learned much as a board member, namely that almost nothing happens the transportation department is not involved in.

Tulloss said they include fulfilling needs for constructing driveways and roads to new schools and constructing roads in and out of future subdivisions.

The transportation department, amid the economic impact of the Great Depression, began maintaining practically all routes in North Carolina.

The department operates with a roughly $4.7 billion budget and relies on fuel taxes to generate most of that budget to maintain more than 80,000 miles of routes.

Tulloss said, however, that the weather, including Hurricanes Matthew and Florence, have hit the transportation department’s budget quite hard in more recent years.

And Tulloss noted the transportation department spent hundreds of millions of dollars on settlements with property owners, this after the judicial system ruled against a state law that had allowed the department to reserve land for future projects without, in effect, fair compensation.

Tulloss also said he believes the coronavirus pandemic has devastated the transportation department because motorists are not driving as much today, this already in a time when today’s vehicles are more fuel efficient.

At the same time, Tulloss is leaving on a good note in Division 4.

Tulloss was heavily involved in securing state approval to shift the state Division of Motor Vehicles headquarters from Raleigh to the former Hardee’s Food Systems building just on the Nash County side of the Nash County-Edgecombe County line.

And Tulloss speaks with pride about the completion of improvements and upgrades to Wesleyan Boulevard from May Drive just south of a replaced Sunset Avenue overpass to just south of the Benvenue Road interchange.

Tulloss was first appointed to the board in the earlier part of 2008 by then-Gov. Mike Easley, who is a Democrat.

And Tulloss noted Cooper reappointed him earlier this year.

Porter said no decisions have been announced yet regarding appointees.

Department spokesman Andrew Barksdale emailed a statement to the Telegram saying, “Mr. Tulloss has well represented the communities of Division 4 for a dozen years.

“He has been a strong advocate for road improvements — and he has been a good ambassador for the N.C. Board of Transportation,” the statement said.

Tulloss made clear he understands things are moving rapidly and said he wants this to be a win-win.

“He was kind enough to let me to stay on and then appointment me,” Tulloss said of Cooper. 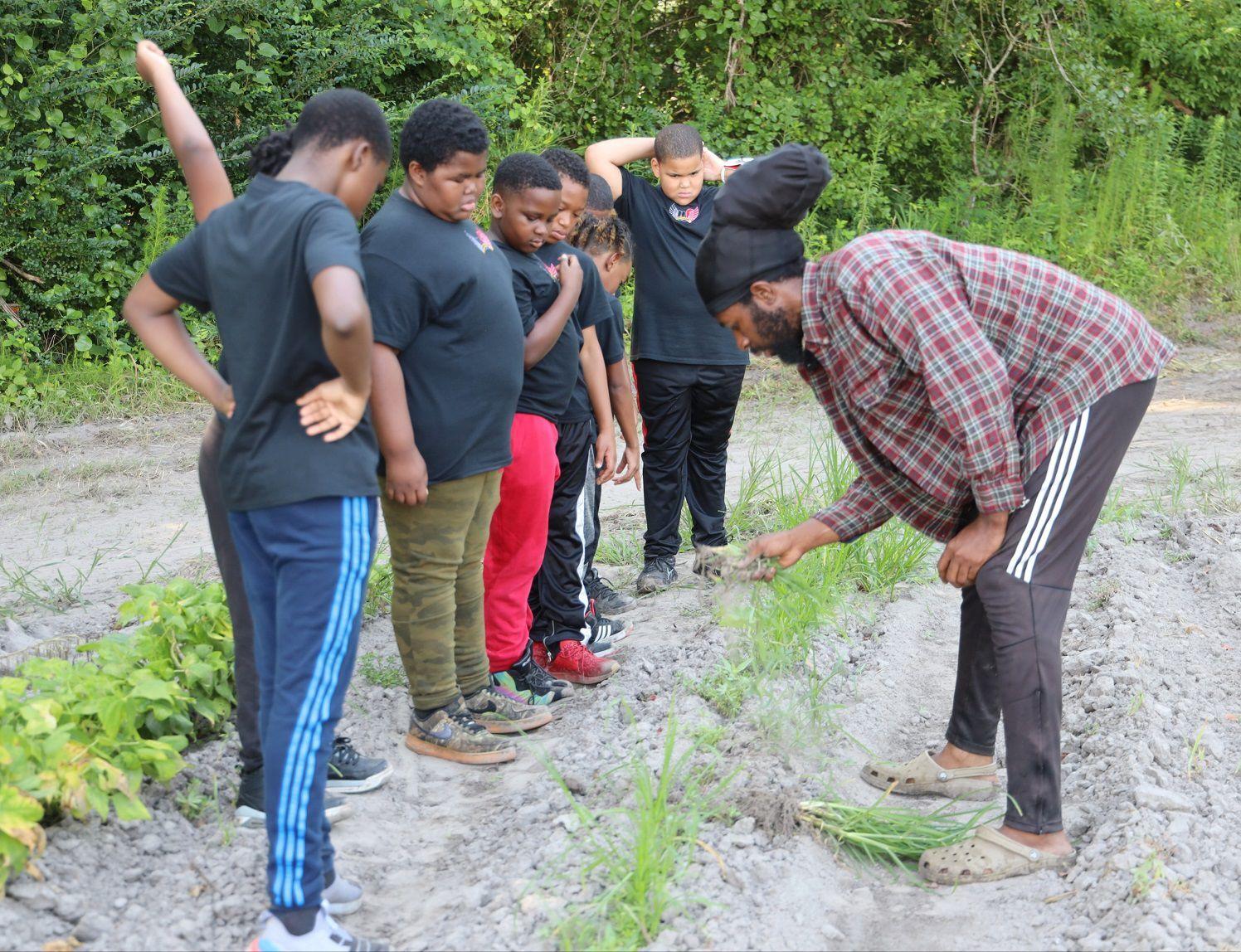 WILLIAM S. MANLEY/SPECIAL TO THE TELEGRAM

Kendrick Ransome talks to participants of the We Fit Leadership Academy during their recent visit to his Golden Organic Farm outside Pinetops.

A 26-year-old man faces three counts of felony death by motor vehicle in connection with a collision late Saturday night that claimed the lives of a man and two young girls.

Trooper Cannon of the State Highway Patrol said the collusion occurred about 11:13 p.m. Saturday on N.C. 43 at the intersection of Melissa Drive in Edgecombe County.

A silver Impala driven by Frederick Nolan Nokes III was traveling in the northbound lane of N.C. 43 when it struck the ATV, killing Daughtridge and the two minor passengers.

The State Highway Patrol is not releasing the names of the minor children involved, and Cannon declined to state the relationship of Daughtridge to the children who were killed in the crash.

A passenger in the Impala was transported to the hospital for treatment of minor injuries and later released.

Nokes initially fled the scene of the crash and was later located with thermal imaging in a nearby wooded area, Cannon said.

Nokes was initially charged with a driving while impaired and felony hit-and-run. He was jailed under a $100,000 bond in the Edgecombe County Detention Center.

The State Highway Patrol Reconstruction Unit was called to the scene to further investigate the crash. By Monday afternoon, Nokes also was charged with the three counts of felony death by motor vehicle.

The details of the collusion are still under investigation.

An early morning shooting Monday sent one Middlesex man to the hospital with serious injuries and led to the arrest of another man for the crime.

Nash County deputies responded about 5:08 a.m. Monday to the 9200 block of Sara Lissa Lane in Middlesex to investigate reports of a shooting with injury.

Upon arrival, deputies located the victim, described only as “an adult male,” lying on the pathway near the residence.

The victim had lost a substantial amount of blood due to a gunshot wound to the upper leg, Nash County Chief Deputy Brandon Medina said in a press release.

Members of the Nash County EMS arrived at the scene and transported the victim to the Raleigh campus of WakeMed. At that point, the victim was rushed into surgery. He is expected to recover, Medina said.

The suspect in the shooting, who was identified as 27-year-old Jason Everette Hill, had already left the scene with his girlfriend by the time deputies arrived. The girlfriend has been identified as Taylor Lynn Walters.

As part of the investigation, investigators with the Nash County Sheriff’s Office were able to locate and seize the firearm used in the incident. That weapon was an AK-47 7.62×39mm rifle.

The motive for the shooting remains under investigation, Medina said.

Hill was jailed under $200,000 secured bond in the Nash County Detention Center. His first appearance is set for Tuesday in District Court in Nashville.

More information has been released about the latest four victims of COVID-19 in Nash County including the fact that one of those victims was a principal of a public school.

From Thursday to Sunday, a Nash County resident died each day from the coronavirus, bringing the total number of deaths in the county to 10.

“We stayed at six deaths for a long time, but over the weekend that number rose to 10,” Nash County Health Director Bill Hill said Monday at a meeting of the Nash County COVID-19 Emergency Response Team.

A 98-year-old woman died Thursday. She was reportedly a victim of the outbreak at the Hunter Hill Senior Living Center.

On Friday, a man in his early 50s succumbed to COVID-19, the Nash County Health Department reported Saturday.

On Monday, Hill confirmed that this man was Teicher Patterson, 50, who recently was named as the 2020 Halifax County Principal of the Year.

Although Patterson served as the principal at Enfield Middle STEAM Academy at the time of his death, he was listed as a resident of the 27804 zip code in Rocky Mount, Hill said.

Hill said he only revealed the name of the victim because Halifax County Public Schools had already released the name, and Patterson’s death from COVID-19 has been widely reported in the press.

“Mr. Patterson was one of our soldiers in the army of righteousness,” Halifax County Superintendent Eric Cunningham wrote on the school district’s Facebook page. “He will be missed but his memory will not be forgotten.”

Before Cunningham assumed the leadership role in Halifax County Public Schools, he served as the associate superintendent of administration and operations for Nash-Rocky Mount Public Schools. Cunningham was reportedly recommending that schools in his district open with online classes only this year.

The tenth COVID-19 victim in Nash County was a woman in her early 90s with underlying health conditions, Wright said in a press release Sunday, the day she died.

Hill said Monday that one of these two victims had been a resident of another assisted living facility in Nash County.

While the death toll rose sharply over the weekend, the number of hospitalizations declined from a high of 32 on Friday to 23 on Monday.

The pace of reports of positive cases of COVID-19 has also slowed over the weekend, though Hill said that may be partially due to an increase in the time for getting lab results as state labs are trying to test greater numbers. As of Monday, 13 new cases were reported over Sunday’s numbers, bringing the total number of cumulative confirmed Nash County cases to 755.

Of that number, 438 people are considered recovered, and 284 are isolated at home.

Edgecombe County has not reported any updated numbers since Thursday. As of Thursday morning, there were 407 cumulative positive cases of COViD-19 reported in that county. Of that number, 344 people are considered recovered and nine have died.

The City of Rocky Mount’s Census Outreach Team is launching a series of Neighborhood Census Day activities focused on increasing the response rate in Rocky Mount.

The Census Outreach Team has been collaborating with local businesses and faith-based organizations as well as utilizing various forms of media to educate the community about the importance of participating in the census.

The Census Outreach Team is available for assistance from 9 a.m. to 1 p.m. Monday through Thursdays at the city’s Human Relations office.

“This data has led me to examine census tracts at the neighborhood level, which has guided the team to focus Neighborhood Census Day activities on the six lowest-responding neighborhoods,” said Rocky Mount Human Relations Director Archie Jones.

The congressional-mandated Census ensures appropriate federal funding for schools, housing, health care, emergency services and more. The estimated federal and state allocation per resident is $1,823. Census forms were mailed in April and can be completed online at www.2020census.gov in less than 10 minutes. In addition, phone options are available in 59 different languages to ensure no one lacks access.

“We hope that this information will help every resident understand the importance of being counted,” said Lois Watkins, community outreach coordinator. “It’s easy, and it’s important to the future of our city.” 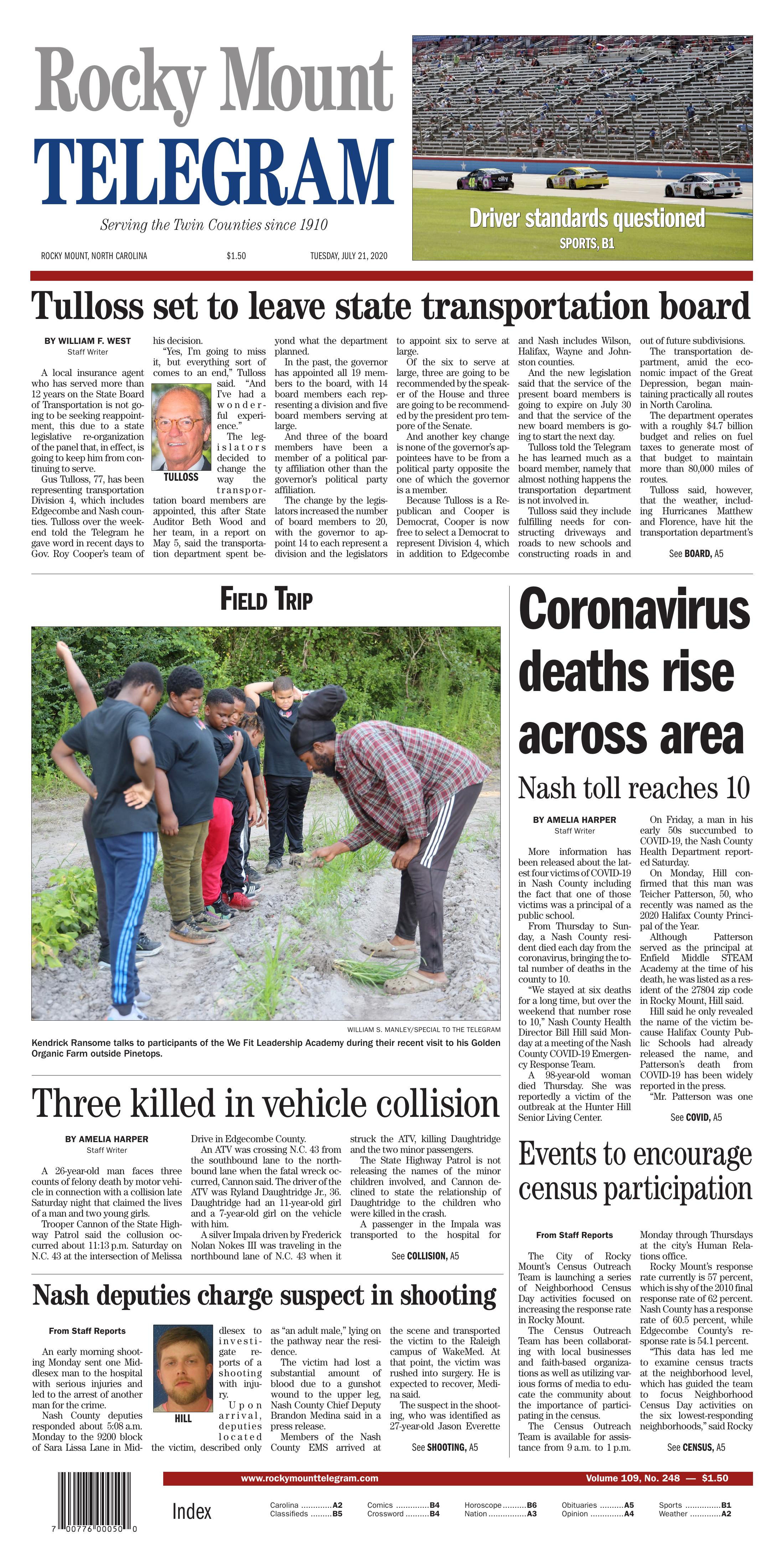