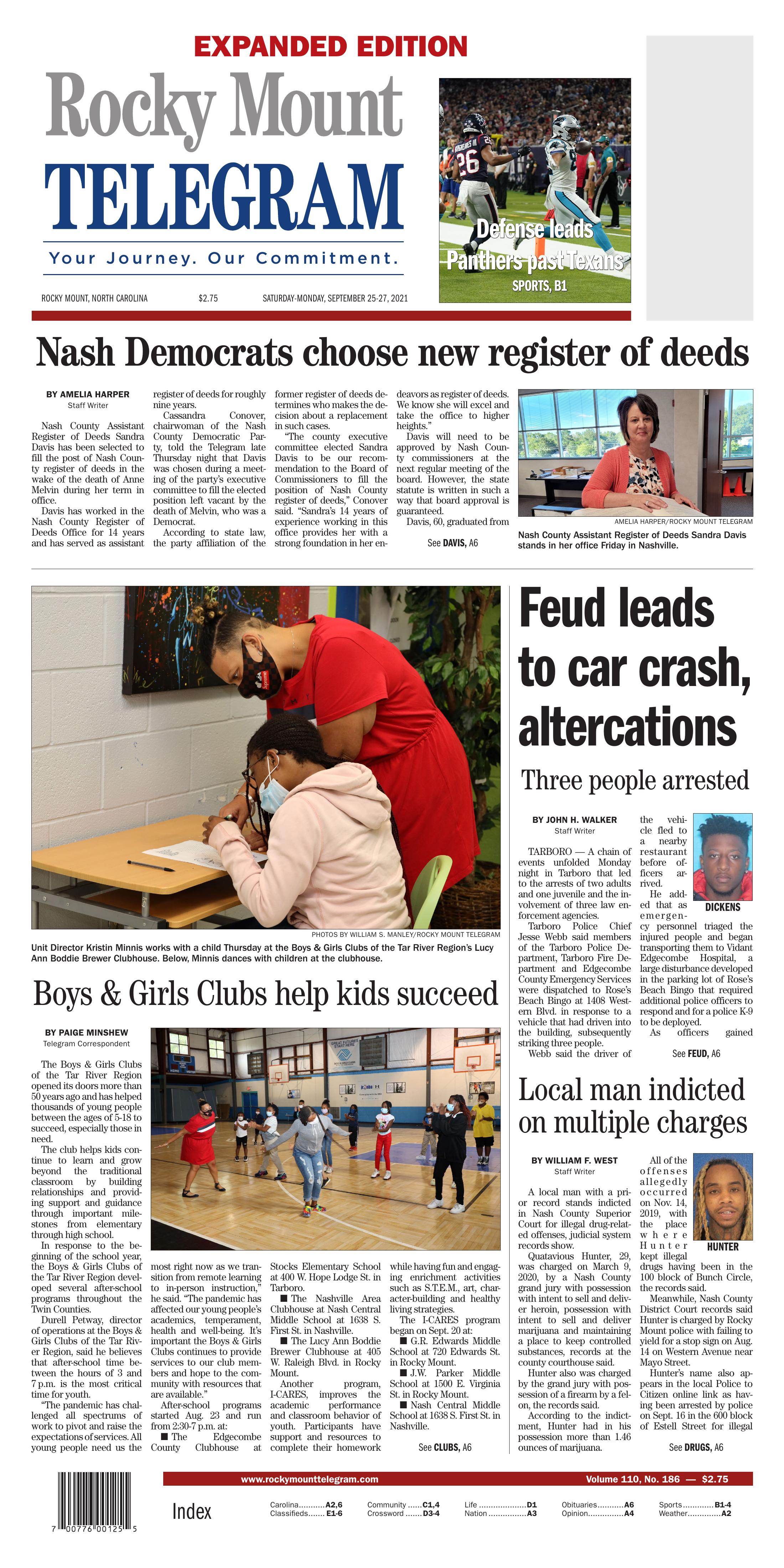 Carolina Panthers tight end Tommy Tremble (82) rushes for a touchdown as Houston Texans cornerback Vernon Hargreaves III (26) defends during the second half of an NFL game Thursday in Houston.

Nash County Assistant Register of Deeds Sandra Davis has been selected to fill the post of Nash County register of deeds in the wake of the death of Anne Melvin during her term in office.

Davis has worked in the Nash County Register of Deeds Office for 14 years and has served as assistant register of deeds for roughly nine years.

Cassandra Conover, chairwoman of the Nash County Democratic Party, told the Telegram late Thursday night that Davis was chosen during a meeting of the party’s executive committee to fill the elected position left vacant by the death of Melvin, who was a Democrat.

According to state law, the party affiliation of the former register of deeds determines who makes the decision about a replacement in such cases.

“The county executive committee elected Sandra Davis to be our recommendation to the Board of Commissioners to fill the position of Nash County register of deeds,” Conover said. “Sandra’s 14 years of experience working in this office provides her with a strong foundation in her endeavors as register of deeds. We know she will excel and take the office to higher heights.”

Davis will need to be approved by Nash County commissioners at the next regular meeting of the board. However, the state statute is written in such a way that board approval is guaranteed.

Davis, 60, graduated from Rocky Mount Senior High School and completed training for the position of register of deeds through the N.C. School of Government at UNC-Chapel Hill.

“I am excited to be about to finish out Anne’s term. I love this job, and I love the people of Nash County,” Davis said Friday in an interview.

Davis said she enjoys her work because she deals daily with the details of people’s lives. Almost every resident of Nash County has had some dealings with the Register of Deeds Office either through birth records, marriage records, death records or deeds to homes and other property. The register of deeds also administers oaths of office for notary publics.

“It is critical that these documents be indexed accurately and maintained so that they can be located when needed while not compromising the integrity of the records,” Davis said Thursday night in a presentation to the executive committee.

Davis said she plans to make some changes to the department as soon as she is able.

“It is my plan to hire someone who speaks Spanish, which can help with the growing number of Hispanic people this office serves,” Davis told the committee. “I will also ensure that the staff is cross-trained and prepared to lead the office in the future. It takes all of us to operate this office efficiently.”

Davis said another nominee also made a presentation to the committee during Thursday night’s meeting. Sandra Cooper, who had worked for Cummins for more than 30 years, was also interested in the position, she said.

“It was a close vote,” Davis said.

Davis said she regrets that the job became hers through Melvin’s death on Sept. 2.

“Anne had been sick for a couple of years before her death, but we all pulled together as a team. It still doesn’t feel real that she isn’t here,” Davis said. “It is an honor to be able to fill out her term. I hope I make her proud.”

Davis said she hopes to run for the position in 2024 when the current term is complete. However, she said she plans to make that decision further down the road.

“A lot can happen in three years,” she said.

The Boys & Girls Clubs of the Tar River Region opened its doors more than 50 years ago and has helped thousands of young people between the ages of 5-18 to succeed, especially those in need.

The club helps kids continue to learn and grow beyond the traditional classroom by building relationships and providing support and guidance through important milestones from elementary through high school.

In response to the beginning of the school year, the Boys & Girls Clubs of the Tar River Region developed several after-school programs throughout the Twin Counties.

Durell Petway, director of operations at the Boys & Girls Clubs of the Tar River Region, said he believes that after-school time between the hours of 3 and 7 p.m. is the most critical time for youth.

“The pandemic has challenged all spectrums of work to pivot and raise the expectations of services. All young people need us the most right now as we transition from remote learning to in-person instruction,” he said. “The pandemic has affected our young people’s academics, temperament, health and well-being. It’s important the Boys & Girls Clubs continues to provide services to our club members and hope to the community with resources that are available.”

Another program, I-CARES, improves the academic performance and classroom behavior of youth. Participants have support and resources to complete their homework while having fun and engaging enrichment activities such as S.T.E.M., art, character-building and healthy living strategies.

The I-CARES program began on Sept. 20 at:

“We are committed more than ever to ensure club staff, members, families and communities have the resources and support they need to navigate these uncertain times while also partnering with local officials and community organizations to do more,” Petway said. “Thanks to our board members, donors and staff we are able to reach our goal to make sure all club members are at or above grade level, practicing good character and citizenship and living a healthy lifestyle.

“Ensuring that our club members have a safe, positive and most importantly fun environment day in and day out is key right now for the young people in our community that have been living in a remote and virtual world,” he added. 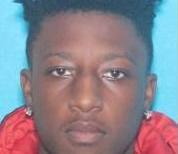 TARBORO — A chain of events unfolded Monday night in Tarboro that led to the arrests of two adults and one juvenile and the involvement of three law enforcement agencies.

Webb said the driver of the vehicle fled to a nearby restaurant before officers arrived.

He added that as emergency personnel triaged the injured people and began transporting them to Vidant Edgecombe Hospital, a large disturbance developed in the parking lot of Rose’s Beach Bingo that required additional police officers to respond and for a police K-9 to be deployed.

As officers gained control of the disturbance, a second disturbance broke out in the waiting room of the Emergency Department at Vidant Edgecombe Hospital after people involved in the first disturbance began showing up at the hospital.

Sharpe approached Quantez Dickens of Greenville, who was concealing an item, and a scuffle ensued. During the scuffle, both Sharpe and Dickens fell to the ground and Sharpe was assaulted from behind by a juvenile female.

Hospital police recovered a handgun allegedly dropped by Dickens during the scuffle and two hospital police officers assisted in taking Dickens and the juvenile into custody.

Webb said investigators learned the initial incident stemmed from an ongoing dispute between the people involved and that the driver of the vehicle intentionally struck the injured pedestrians.

He said that based upon these findings, the driver, 24-year-old Essence Annette Harris, was charged with three counts of aggravated assault and one count of damage to property. She was jailed under a $20,000 bond in the Edgecombe County Detention Center.

According to a Facebook post, Dickens was charged with carrying a concealed weapon, disorderly conduct and resisting a public officer. The juvenile female is being charged through the juvenile court system.

Hunter also was charged by the grand jury with possession of a firearm by a felon, the records said.

According to the indictment, Hunter had in his possession more than 1.46 ounces of marijuana.

All of the offenses allegedly occurred on Nov. 14, 2019, with the place where Hunter kept illegal drugs having been in the 100 block of Bunch Circle, the records said.

Meanwhile, Nash County District Court records said Hunter is charged by Rocky Mount police with failing to yield for a stop sign on Aug. 14 on Western Avenue near Mayo Street.

Hunter’s name also appears in the local Police to Citizen online link as having been arrested by police on Sept. 16 in the 600 block of Estell Street for illegal drug-related violations.

Hunter was released on bond the day after he was arrested for possession with intent to sell and deliver cocaine, possession of cocaine and possession of drug paraphernalia, Medina said.

Hunter had listed his address in the 100 block of Bunch Circle, Medina said.