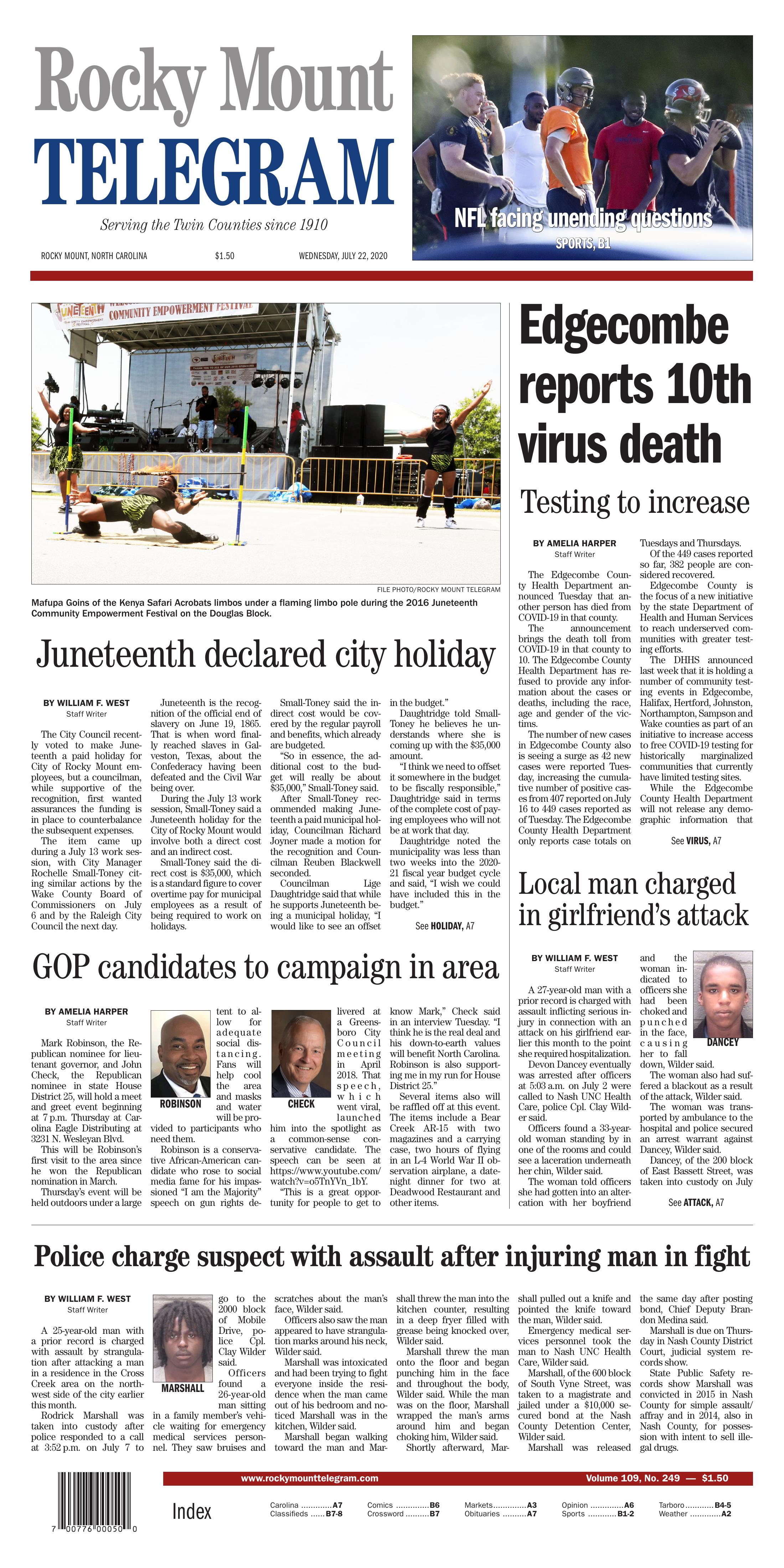 Mafupa Goins of the Kenya Safari Acrobats limbos under a flaming limbo pole during the 2016 Juneteenth Community Empowerment Festival on the Douglas Block.

The City Council recently voted to make Juneteenth a paid holiday for City of Rocky Mount employees, but a councilman, while supportive of the recognition, first wanted assurances the funding is in place to counterbalance the subsequent expenses.

The item came up during a July 13 work session, with City Manager Rochelle Small-Toney citing similar actions by the Wake County Board of Commissioners on July 6 and by the Raleigh City Council the next day.

Juneteenth is the recognition of the official end of slavery on June 19, 1865. That is when word finally reached slaves in Galveston, Texas, about the Confederacy having been defeated and the Civil War being over.

During the July 13 work session, Small-Toney said a Juneteenth holiday for the City of Rocky Mount would involve both a direct cost and an indirect cost.

Small-Toney said the direct cost is $35,000, which is a standard figure to cover overtime pay for municipal employees as a result of being required to work on holidays.

Small-Toney said the indirect cost would be covered by the regular payroll and benefits, which already are budgeted.

“So in essence, the additional cost to the budget will really be about $35,000,” Small-Toney said.

After Small-Toney recommended making Juneteenth a paid municipal holiday, Councilman Richard Joyner made a motion for the recognition and Councilman Reuben Blackwell seconded.

Councilman Lige Daughtridge said that while he supports Juneteenth being a municipal holiday, “I would like to see an offset in the budget.”

Daughtridge told Small-Toney he believes he understands where she is coming up with the $35,000 amount.

“I think we need to offset it somewhere in the budget to be fiscally responsible,” Daughtridge said in terms of the complete cost of paying employees who will not be at work that day.

Daughtridge noted the municipality was less than two weeks into the 2020-21 fiscal year budget cycle and said, “I wish we could have included this in the budget.”

Daughtridge also commented in the context of the economic effect of the coronavirus pandemic.

“We don’t know where we’re going with COVID,” Daughtridge said.

“I just think it would be prudent if we offset it somewhere in the budget,” Daughtridge said.

Small-Toney said she did not come with a request for a supplemental appropriation because the plan is to absorb the cost of the Juneteenth holiday from savings in salaries and benefits.

Small-Toney said that although the city budgets for all employee positions with up to 100 percent funding, the reality is that there will be vacancies throughout the year.

“And so that would be the offset,” Small-Toney said.

Under questioning from Mayor Sandy Roberson, Small-Toney said the municipality recognizes at least 10 holidays, but she said that, regardless of those holidays, there are municipal employees who continue to work.

“And so by our personnel ordinance, we’re required to pay additional for the overtime,” Small-Toney said. “And so that is what the $35,000 represents.”

The item was shifted to the subsequent council regular meeting. When the item came back up, Joyner made the motion, seconded by Councilman Andre Knight, to make Juneteenth a municipal holiday.

Daughtridge stated his support for the recognition, his receiving assurances this could be worked into the budget and his wanting the municipality to be fiscally responsible.

Knight said Small-Toney explained the municipality has the money to make Juneteenth a municipal holiday.

“As far as the question about fiscal responsibility, she did her due diligence and she can speak for herself — and recommended that,” Knight said.

The recognition was approved without any dissenting votes.

A movement to make Juneteenth a holiday in many places has been growing since the May 25 death of African-American George Floyd while he was in police custody in Minneapolis.

On June 29, the Hillsborough Board of Town Commissioners made Juneteenth a holiday in the Orange County municipality.

Additionally, the day after the Rocky Mount City Council’s work session and regular meeting, the Asheville City Council received much publicity by going on record in favor of reparations for Asheville’s African-American residents.

Published news reports made clear the Asheville City Council’s action does not mandate direct payments, but makes clear there will be investments in areas where Black residents face disparities.

This will be Robinson’s first visit to the area since he won the Republican nomination in March.

Thursday’s event will be held outdoors under a large tent to allow for adequate social distancing. Fans will help cool the area and masks and water will be provided to participants who need them.

Robinson is a conservative African-American candidate who rose to social media fame for his impassioned “I am the Majority” speech on gun rights delivered at a Greensboro City Council meeting in April 2018. That speech, which went viral, launched him into the spotlight as a common-sense conservative candidate. The speech can be seen at https://www.youtube.com/watch?v=o5TnYVn_1bY.

“This is a great opportunity for people to get to know Mark,” Check said in an interview Tuesday. “I think he is the real deal and his down-to-earth values will benefit North Carolina. Robinson is also supporting me in my run for House District 25.”

Several items also will be raffled off at this event. The items include a Bear Creek AR-15 with two magazines and a carrying case, two hours of flying in an L-4 World War II observation airplane, a date-night dinner for two at Deadwood Restaurant and other items.

Crime
Suspect charged with assault after injuring man in fight

A 25-year-old man with a prior record is charged with assault by strangulation after attacking a man in a residence in the Cross Creek area on the northwest side of the city earlier this month.

Rodrick Marshall was taken into custody after police responded to a call at 3:52 p.m. on July 7 to go to the 2000 block of Mobile Drive, police Cpl. Clay Wilder said.

Officers also saw the man appeared to have strangulation marks around his neck, Wilder said.

Marshall was intoxicated and had been trying to fight everyone inside the residence when the man came out of his bedroom and noticed Marshall was in the kitchen, Wilder said.

Marshall began walking toward the man and Marshall threw the man into the kitchen counter, resulting in a deep fryer filled with grease being knocked over, Wilder said.

Marshall threw the man onto the floor and began punching him in the face and throughout the body, Wilder said. While the man was on the floor, Marshall wrapped the man’s arms around him and began choking him, Wilder said.

Shortly afterward, Marshall pulled out a knife and pointed the knife toward the man, Wilder said.

Marshall, of the 600 block of South Vyne Street, was taken to a magistrate and jailed under a $10,000 secured bond at the Nash County Detention Center, Wilder said.

State Public Safety records show Marshall was convicted in 2015 in Nash County for simple assault/affray and in 2014, also in Nash County, for possession with intent to sell illegal drugs.

The Edgecombe County Health Department announced Tuesday that another person has died from COVID-19 in that county.

The announcement brings the death toll from COVID-19 in that county to 10. The Edgecombe County Health Department has refused to provide any information about the cases or deaths, including the race, age and gender of the victims.

Of the 449 cases reported so far, 382 people are considered recovered.

Edgecombe County is the focus of a new initiative by the state Department of Health and Human Services to reach underserved communities with greater testing efforts.

The DHHS announced last week that it is holding a number of community testing events in Edgecombe, Halifax, Hertford, Johnston, Northampton, Sampson and Wake counties as part of an initiative to increase access to free COVID-19 testing for historically marginalized communities that currently have limited testing sites.

While the Edgecombe County Health Department will not release any demographic information that informs the public who is most at risk in the county, the DHHS chose Edgecombe County to be part of this effort because it apparently has disproportionate rates of COVID-19 cases among certain demographic groups.

According to a statement from the DHHS, a disproportionately high percentage of North Carolina’s confirmed cases of COVID-19 have occurred among historically marginalized populations. Mounting evidence shows that members of these populations experience higher rates of COVID-19 mortality and serious complications.

“People who may not currently have symptoms but may have been exposed to COVID-19 should get tested — especially people from historically marginalized communities, including Latinx/Hispanic, Black/African American and American Indian populations,” the statement from the DHHS said.

In addition, testing is a priority for anyone who has symptoms or people who may have been exposed to COVID-19, including:

If someone tests positive for COVID-19, the COVID-19 Community Team will reach out to them and connect them with needed supports. People should answer the call when the COVID-19 Community Team reaches out, the statement said. They also may get a text message from the number 45394 or email from NC-ARIAS-NoReply@dhhs.nc.gov with further instructions.

The press release stated that there is no cost for COVID testing through this program.

Several community testing events will be held in Edgecombe County in the next few days, according to the information provided by the DHHS.

The Edgecombe County Health Department also will offer testing from 9-11:30 a.m. on July 27 and July 29 at the Tarboro Leggett Volunteer Fire Department at 29 Draughn Road in Tarboro. Call 252-985-4100 for more information.

A 27-year-old man with a prior record is charged with assault inflicting serious injury in connection with an attack on his girlfriend earlier this month to the point she required hospitalization.

Officers found a 33-year-old woman standing by in one of the rooms and could see a laceration underneath her chin, Wilder said.

The woman told officers she had gotten into an altercation with her boyfriend and the woman indicated to officers she had been choked and punched in the face, causing her to fall down, Wilder said.

The woman also had suffered a blackout as a result of the attack, Wilder said.

The woman was transported by ambulance to the hospital and police secured an arrest warrant against Dancey, Wilder said.

Dancey, of the 200 block of East Bassett Street, was taken into custody on July 8, Wilder said.

He was released from the Edgecombe County Detention Center on July 10 after posting a $1,000 secured bond, Sheriff Clee Atkinson said.

Dancey is due on Sept. 14 in Edgecombe County District Court on the charge, which is considered to be a misdemeanor offense.

State Public Safety records show Dancey was convicted in 2010 for reckless driving and disorderly conduct, both in Nash County.