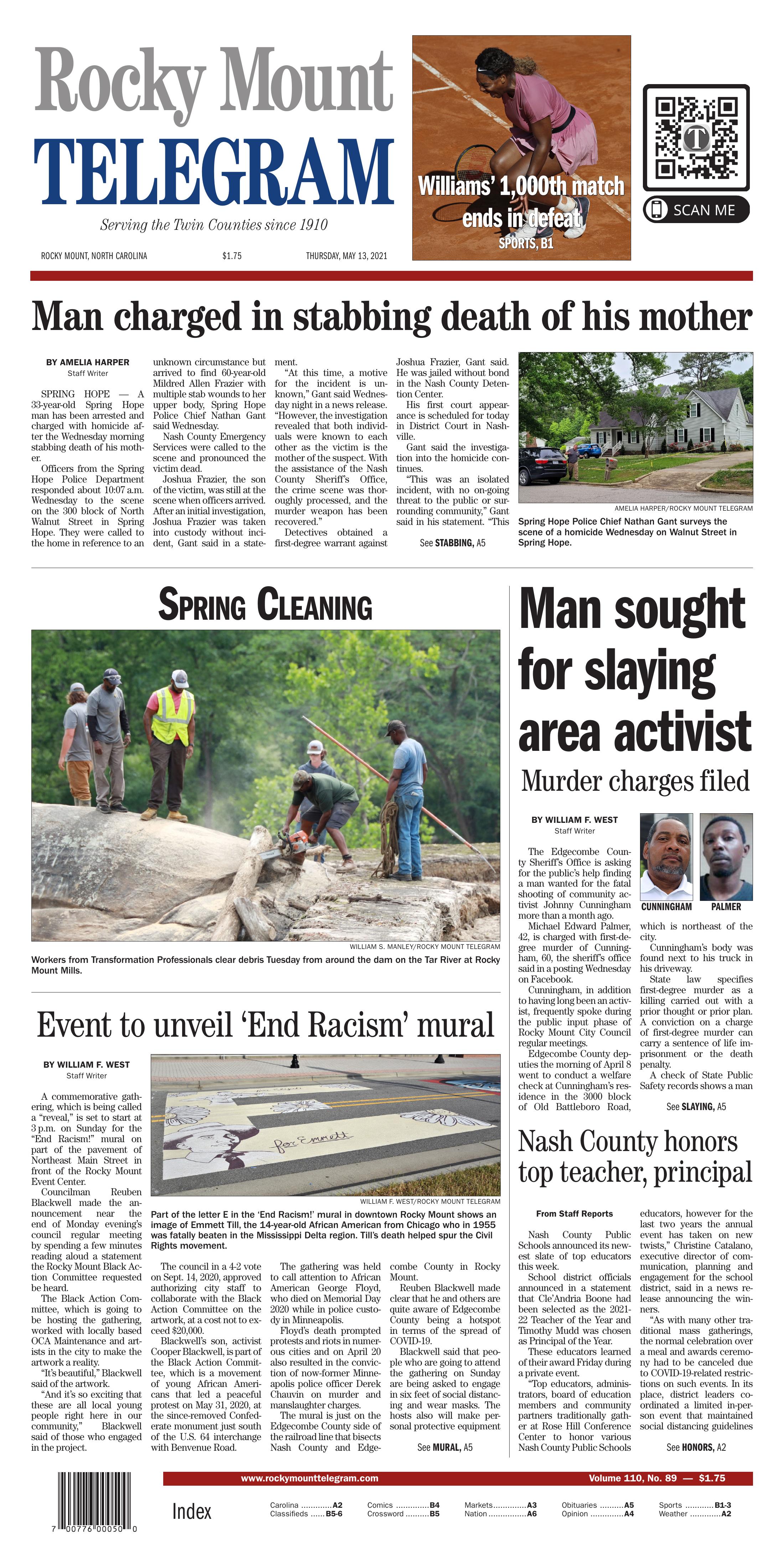 SPRING HOPE — A 33-year-old Spring Hope man has been arrested and charged with homicide after the Wednesday morning stabbing death of his mother.

Officers from the Spring Hope Police Department responded about 10:07 a.m. Wednesday to the scene on the 300 block of North Walnut Street in Spring Hope. They were called to the home in reference to an unknown circumstance but arrived to find 60-year-old Mildred Allen Frazier with multiple stab wounds to her upper body, Spring Hope Police Chief Nathan Gant said Wednesday.

Nash County Emergency Services were called to the scene and pronounced the victim dead.

Joshua Frazier, the son of the victim, was still at the scene when officers arrived. After an initial investigation, Joshua Frazier was taken into custody without incident, Gant said in a statement.

“At this time, a motive for the incident is unknown,” Gant said Wednesday night in a news release. “However, the investigation revealed that both individuals were known to each other as the victim is the mother of the suspect. With the assistance of the Nash County Sheriff’s Office, the crime scene was thoroughly processed, and the murder weapon has been recovered.”

Detectives obtained a first-degree warrant against Joshua Frazier, Gant said. He was jailed without bond in the Nash County Detention Center.

His first court appearance is scheduled for today in District Court in Nashville.

Gant said the investigation into the homicide continues.

“This was an isolated incident, with no on-going threat to the public or surrounding community,” Gant said in his statement. “This is still an on-going investigation.”

While Gant said in an interview Wednesday that he could not comment on the mental state of the suspect, Michael Edwards, a next-door neighbor to the Frazier home, said Joshua Frazier was known in the community to have a history of mental illness.

“I have known the guy for a little while and he has some mental issues,” Edwards said. “I don’t think he should have been in this town because of his mental issues.”

Edwards said Frazier lived at the home with his mother, father and several other family members. He said Wednesday that he was appalled to come home to learn what had happened in the home next door.

“I came home and heard about this and it makes me mad. The lady was real nice, and this is a peaceful neighborhood. Nobody in this neighborhood messes with nobody,” he said.

Edwards was especially upset to learn that the mother of the family was the victim of the homicide.

“It makes me so mad that he killed his mama because my daddy just died from COVID-19. If I ever see him again, I am afraid I might hurt him because you aren’t supposed to kill your mama. I take that to the heart. When you kill a mama, you are a sick man,” Edwards said.

Anyone who has any information about the incident is asked to contact Detective Bell of the Spring Hope Police Department at 252-478-5197 or via email at twbell@springhope.net. 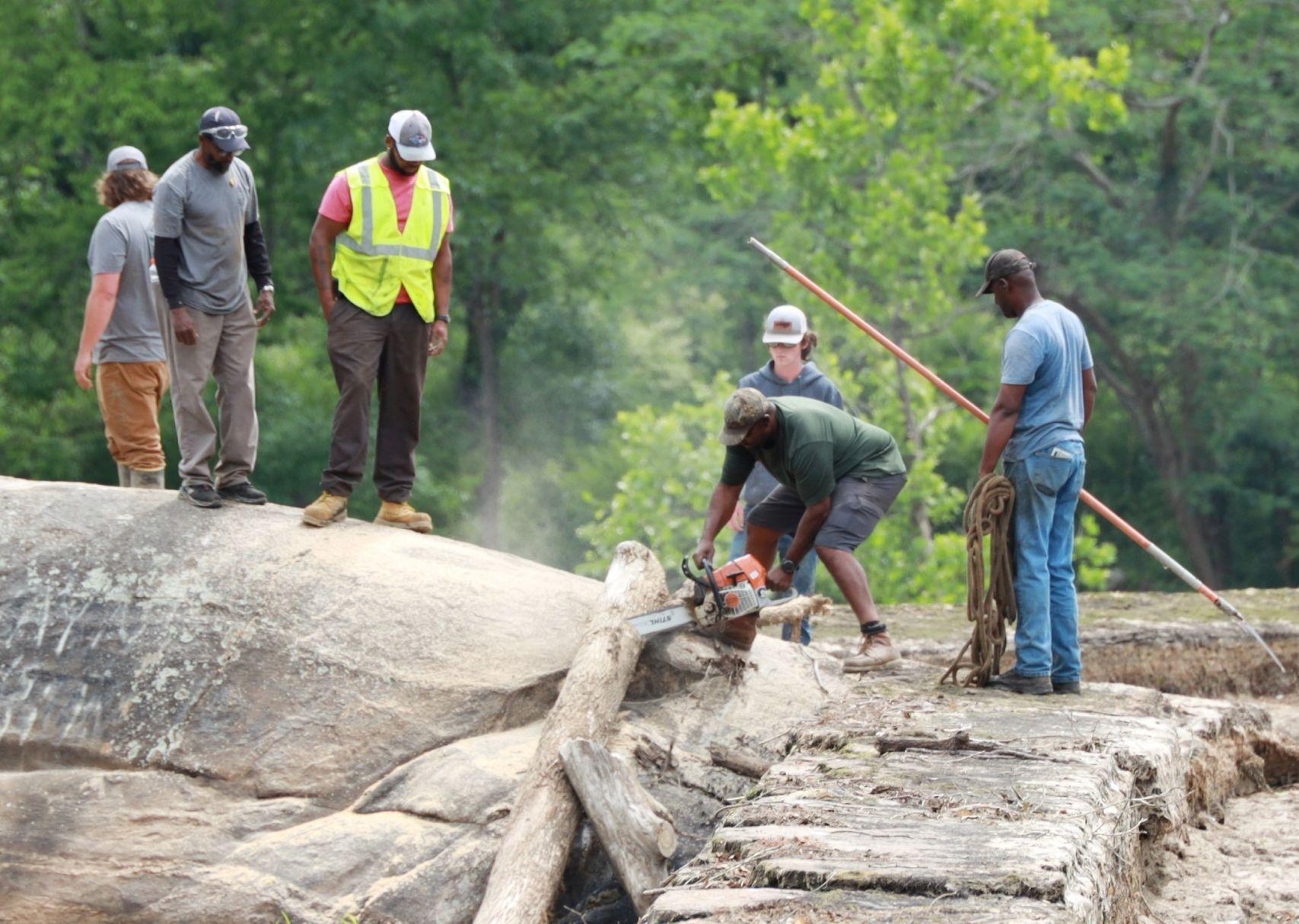 Workers from Transformation Professionals clear debris Tuesday from around the dam on the Tar River at Rocky Mount Mills.

Part of the letter E in the ‘End Racism!’ mural in downtown Rocky Mount shows an image of Emmett Till, the 14-year-old African American from Chicago who in 1955 was fatally beaten in the Mississippi Delta region. Till’s death helped spur the Civil Rights movement.

Volunteers work on an ‘End Racism!’ street mural Tuesday on Northeast Main Street in front of the event center.

Cooper Blackwell works on an 'End Racism!' street mural Wednesday on Northeast Main Street in front of the event center.

Volunteers work on an ‘End Racism!’ street mural Wednesday on Northeast Main Street in front of the event center.

A commemorative gathering, which is being called a “reveal,” is set to start at 3 p.m. on Sunday for the “End Racism!” mural on part of the pavement of Northeast Main Street in front of the Rocky Mount Event Center.

Councilman Reuben Blackwell made the announcement near the end of Monday evening’s council regular meeting by spending a few minutes reading aloud a statement the Rocky Mount Black Action Committee requested be heard.

The Black Action Committee, which is going to be hosting the gathering, worked with locally based OCA Maintenance and artists in the city to make the artwork a reality.

“And it’s so exciting that these are all local young people right here in our community,” Blackwell said of those who engaged in the project.

The council in a 4-2 vote on Sept. 14, 2020, approved authorizing city staff to collaborate with the Black Action Committee on the artwork, at a cost not to exceed $20,000.

Blackwell’s son, activist Cooper Blackwell, is part of the Black Action Committee, which is a movement of young African Americans that led a peaceful protest on May 31, 2020, at the since-removed Confederate monument just south of the U.S. 64 interchange with Benvenue Road.

The gathering was held to call attention to African American George Floyd, who died on Memorial Day 2020 while in police custody in Minneapolis.

Floyd’s death prompted protests and riots in numerous cities and on April 20 also resulted in the conviction of now-former Minneapolis police officer Derek Chauvin on murder and manslaughter charges.

Reuben Blackwell made clear that he and others are quite aware of Edgecombe County being a hotspot in terms of the spread of COVID-19.

Blackwell said that people who are going to attend the gathering on Sunday are being asked to engage in six feet of social distancing and wear masks. The hosts also will make personal protective equipment available to help ensure health safety.

The Telegram on July 9, 2020, reported that Candice Kirtz, who is the purchasing manager in the city Finance Department’s purchasing division, had online requested a quote from vendors for a project titled, “Black Lives Matter Painting.”

The newspaper reported that the City of Rocky Mount appeared to be interested in having the words “Black Lives Matter” painted on the roof of an old railroad track-side loading dock along Falls Road and across the tracks from the event center.

A city spokesman did not respond to an email seeking further information for that story, but during a council work session on Aug. 10, 2020, the council heard a presentation by Cooper Blackwell calling for a Black Lives Matter mural project.

During Monday’s council regular meeting, Reuben Blackwell, in reading from the Black Action Committee’s prepared statement, said that the committee conducted brainstorming sessions during meetings this past autumn as options for the Black Lives Matter message — and ultimately selected “End Racism!” as the message to be painted.

Blackwell, in reading from the prepared statement, said artists submitted designs to the Black Action Committee and were selected based on both skill levels and their respective messages.

He said that each artist received a $250 stipend from the city for their respective contribution to the mural and that the city hired OCA Maintenance to complete the outline of the message.

Blackwell, who attended UNC-Chapel Hill, noted with humor that while he does not promote Duke University, OCA Maintenance is owned by former Duke Blue Devils football player Quay Mann.

The Edgecombe County Sheriff’s Office is asking for the public’s help finding a man wanted for the fatal shooting of community activist Johnny Cunningham more than a month ago.

Michael Edward Palmer, 42, is charged with first-degree murder of Cunningham, 60, the sheriff’s office said in a posting Wednesday on Facebook.

Cunningham, in addition to having long been an activist, frequently spoke during the public input phase of Rocky Mount City Council regular meetings.

Edgecombe County deputies the morning of April 8 went to conduct a welfare check at Cunningham’s residence in the 3000 block of Old Battleboro Road, which is northeast of the city.

Cunningham’s body was found next to his truck in his driveway.

A check of State Public Safety records shows a man with the same date of birth as Palmer having a history of convictions, mostly in Nash County, although not in roughly a dozen years.

The records also show a conviction in 1999 in Granville County for attempted breaking and entering of vehicles.

The posting by the Edgecombe County Sheriff’s office on Facebook said Palmer had listed an address in the 100 block of Burnette Street, which is in Southeast Rocky Mount.

Anyone with any information as to Palmer’s whereabouts is asked to phone Detective Sgt. Robert Tinder at 252-813-2451.

GARRY E. HODGES/SPECIAL TO THE TELEGRAM

School district officials announced in a statement that Cle’Andria Boone had been selected as the 2021-22 Teacher of the Year and Timothy Mudd was chosen as Principal of the Year.

These educators learned of their award Friday during a private event.

“Top educators, administrators, board of education members and community partners traditionally gather at Rose Hill Conference Center to honor various Nash County Public Schools educators, however for the last two years the annual event has taken on new twists,” Christine Catalano, executive director of communication, planning and engagement for the school district, said in a news release announcing the winners.

“As with many other traditional mass gatherings, the normal celebration over a meal and awards ceremony had to be canceled due to COVID-19-related restrictions on such events. In its place, district leaders coordinated a limited in-person event that maintained social distancing guidelines but still allowed honorees to celebrate together,” she said.

Boone teaches at Williford Elementary School. She also was the Nash County Public Schools Elementary Teacher of the Year.

“Her obvious surprise and excitement was captured during the event as Graham Nelson of Davenport Honda presented her with the keys to a brand new Honda Accord,” Catalano said in the statement.

Each year, the Nash County Public Schools Teacher of the Year is typically presented with a free one-year lease to a new vehicle courtesy of the Rocky Mount dealership.

Mudd, who won top honors as the 2021-22 Nash County Public Schools Principal of the Year, is a middle school principal serving at Red Oak Middle School.