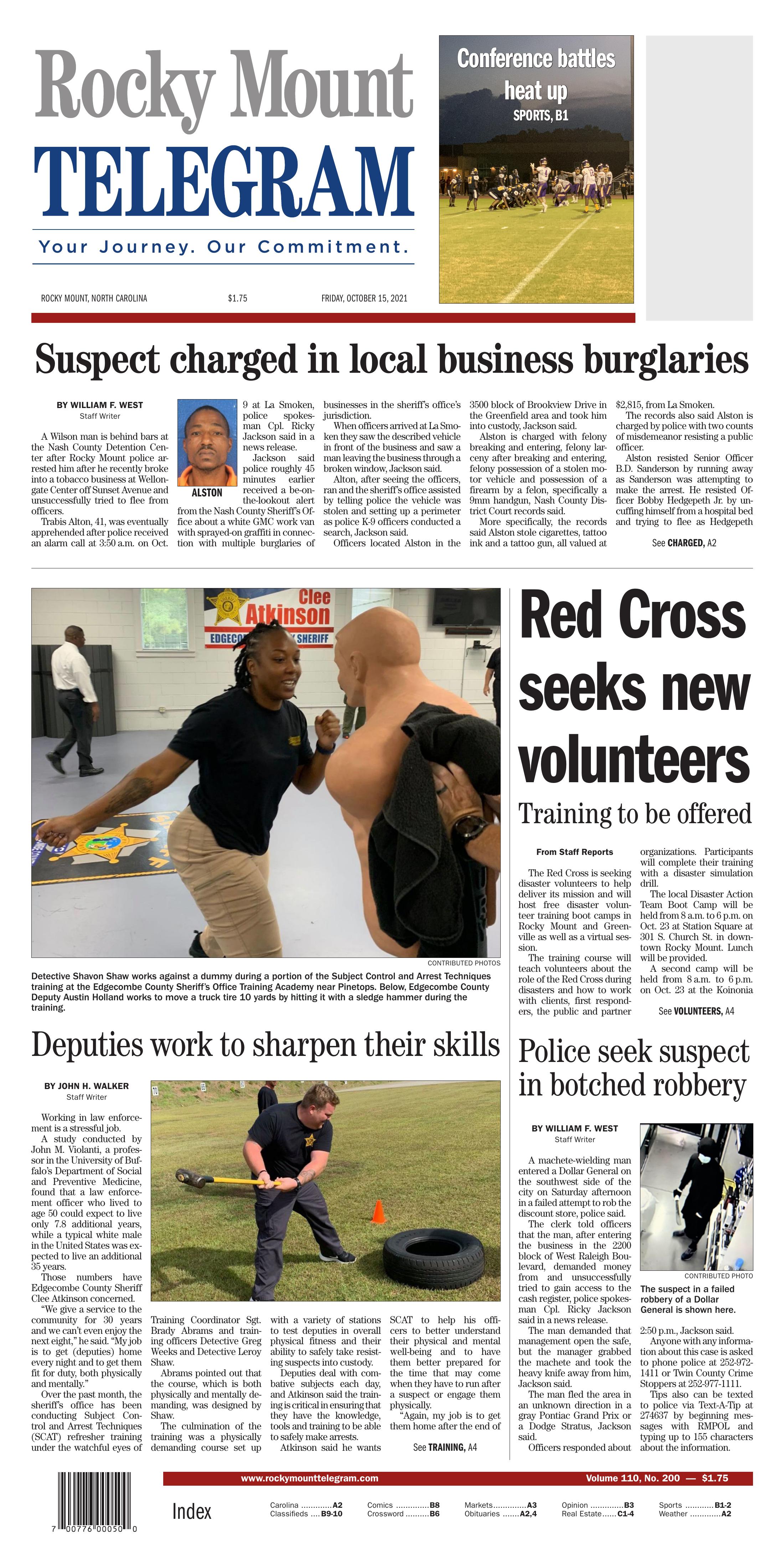 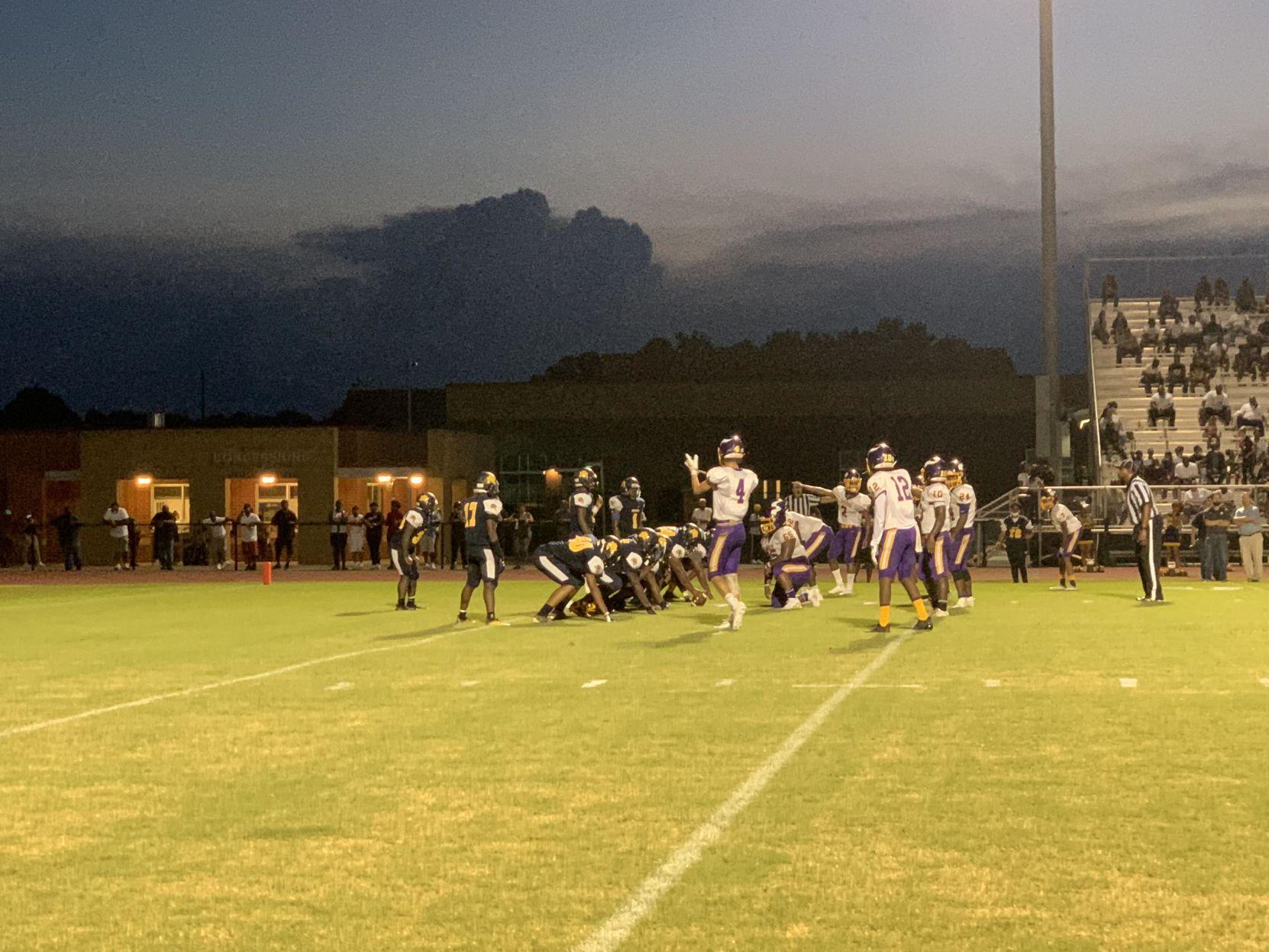 Tarboro players point across the line at Rocky Mount High during their Week 1 game in Rocky Mount. The Vikings have won seven games in a row.

A Wilson man is behind bars at the Nash County Detention Center after Rocky Mount police arrested him after he recently broke into a tobacco business at Wellongate Center off Sunset Avenue and unsuccessfully tried to flee from officers.

When officers arrived at La Smoken they saw the described vehicle in front of the business and saw a man leaving the business through a broken window, Jackson said.

Alton, after seeing the officers, ran and the sheriff’s office assisted by telling police the vehicle was stolen and setting up a perimeter as police K-9 officers conducted a search, Jackson said.

Officers located Alston in the 3500 block of Brookview Drive in the Greenfield area and took him into custody, Jackson said.

More specifically, the records said Alston stole cigarettes, tattoo ink and a tattoo gun, all valued at $2,815, from La Smoken.

The records also said Alston is charged by police with two counts of misdemeanor resisting a public officer.

Alston resisted Senior Officer B.D. Sanderson by running away as Sanderson was attempting to make the arrest. He resisted Officer Bobby Hedgepeth Jr. by uncuffing himself from a hospital bed and trying to flee as Hedgepeth tried to render aid to Alston after Alston had complained of having been injured, the records said.

Alston was turned over to the custody of the county detention center on $30,500 secured bond, Jackson said.

Additionally, the Nash County District Court records said Alston is facing a list of theft-related charges by the sheriff’s office.

The records said Alston is accused of breaking and entering and stealing cartons of cigarettes, male enhancement pills and coins, with the property valued at about $600, from a store whose building is owned by Norman Batchelor and located at the junction of N.C. 97 and South Halifax Road.

That incident occurred on Oct. 8, the records said.

The records also said Alston is accused of throwing a block through the glass front door of the Dollar General discount store in Dortches and of trying to break into the Griffin’s convenience store in Red Oak.

Both incidents occurred on Oct. 9, the records said.

Alston had listed an address in the 400 block of Academy Street in Wilson, the records said.

State Public Safety records said Alston has a list of convictions in Wilson County from 2013 to 1997.

The records said Alston over the years has been convicted of assault with a deadly weapon inflicting serious injury, selling illegal drugs, possession with intent to sell illegal drugs and maintaining a place for the purposes of illegal drugs.

The records also said Alston over the years has been convicted of larceny, possessing stolen goods, receiving a stolen vehicle and resisting an officer.

Working in law enforcement is a stressful job.

A study conducted by John M. Violanti, a professor in the University of Buffalo’s Department of Social and Preventive Medicine, found that a law enforcement officer who lived to age 50 could expect to live only 7.8 additional years, while a typical white male in the United States was expected to live an additional 35 years.

“We give a service to the community for 30 years and we can’t even enjoy the next eight,” he said. “My job is to get (deputies) home every night and to get them fit for duty, both physically and mentally.”

Over the past month, the sheriff’s office has been conducting Subject Control and Arrest Techniques (SCAT) refresher training under the watchful eyes of Training Coordinator Sgt. Brady Abrams and training officers Detective Greg Weeks and Detective Leroy Shaw.

Abrams pointed out that the course, which is both physically and mentally demanding, was designed by Shaw.

The culmination of the training was a physically demanding course set up with a variety of stations to test deputies in overall physical fitness and their ability to safely take resisting suspects into custody.

Deputies deal with combative subjects each day, and Atkinson said the training is critical in ensuring that they have the knowledge, tools and training to be able to safely make arrests.

Atkinson said he wants SCAT to help his officers to better understand their physical and mental well-being and to have them better prepared for the time that may come when they have to run after a suspect or engage them physically.

“Again, my job is to get them home after the end of their shift and to be able to survive because they have the proper training and they are physically and mentally fit,” he said.

SCAT was broken down into four sessions.

“We made sure the sergeants went first, but the interesting thing we saw was that everyone stayed after completing the course to cheer on others,” Atkinson said. “It helped build teamwork. We saw strengths and weaknesses, but it went better as a team pulling for one another.”

Atkinson said the training was not mandated by the state.

“It was sheriff-mandated,” he said with a smile.

Atkinson said there was no pass or fail tied to the course, just a method of evaluation and a continuation of training.

That won’t be the case next year when all sworn deputies will be required to pass POPAT — the Police Officer Physical Ability Test.

“It will be pass or fail,” Atkinson said. “That’s why we’re giving everybody a year to prepare.”

Atkinson said he has officers who are great runners and officers who can handle themselves physically but added that all of them need to be well-rounded.

“This is to ensure that we are ready to best serve the public, while also looking after the physical and mental health of the deputies that serve,” he said. “This training puts us in a position to make sure we are successful.”

The training course will teach volunteers about the role of the Red Cross during disasters and how to work with clients, first responders, the public and partner organizations. Participants will complete their training with a disaster simulation drill.

The local Disaster Action Team Boot Camp will be held from 8 a.m. to 6 p.m. on Oct. 23 at Station Square at 301 S. Church St. in downtown Rocky Mount. Lunch will be provided.

One virtual session will be offered via Microsoft Teams, with a link to be provided to registrants prior to the event.

Participants in the training boot camps will:

To sign up for a training boot camp, go to bit.ly/datbootcamp or contact Elisabeth Grant at elisabeth.grant@redcross.org or 252-933-7386. Registration is required by Oct. 21.

The suspect in a failed robbery of a Dollar General is shown here.

The suspect in a failed robbery of a Dollar General is shown here.

A machete-wielding man entered a Dollar General on the southwest side of the city on Saturday afternoon in a failed attempt to rob the discount store, police said.

The clerk told officers that the man, after entering the business in the 2200 block of West Raleigh Boulevard, demanded money from and unsuccessfully tried to gain access to the cash register, police spokesman Cpl. Ricky Jackson said in a news release.

The man demanded that management open the safe, but the manager grabbed the machete and took the heavy knife away from him, Jackson said.

The man fled the area in an unknown direction in a gray Pontiac Grand Prix or a Dodge Stratus, Jackson said.

Tips also can be texted to police via Text-A-Tip at 274637 by beginning messages with RMPOL and typing up to 155 characters about the information.