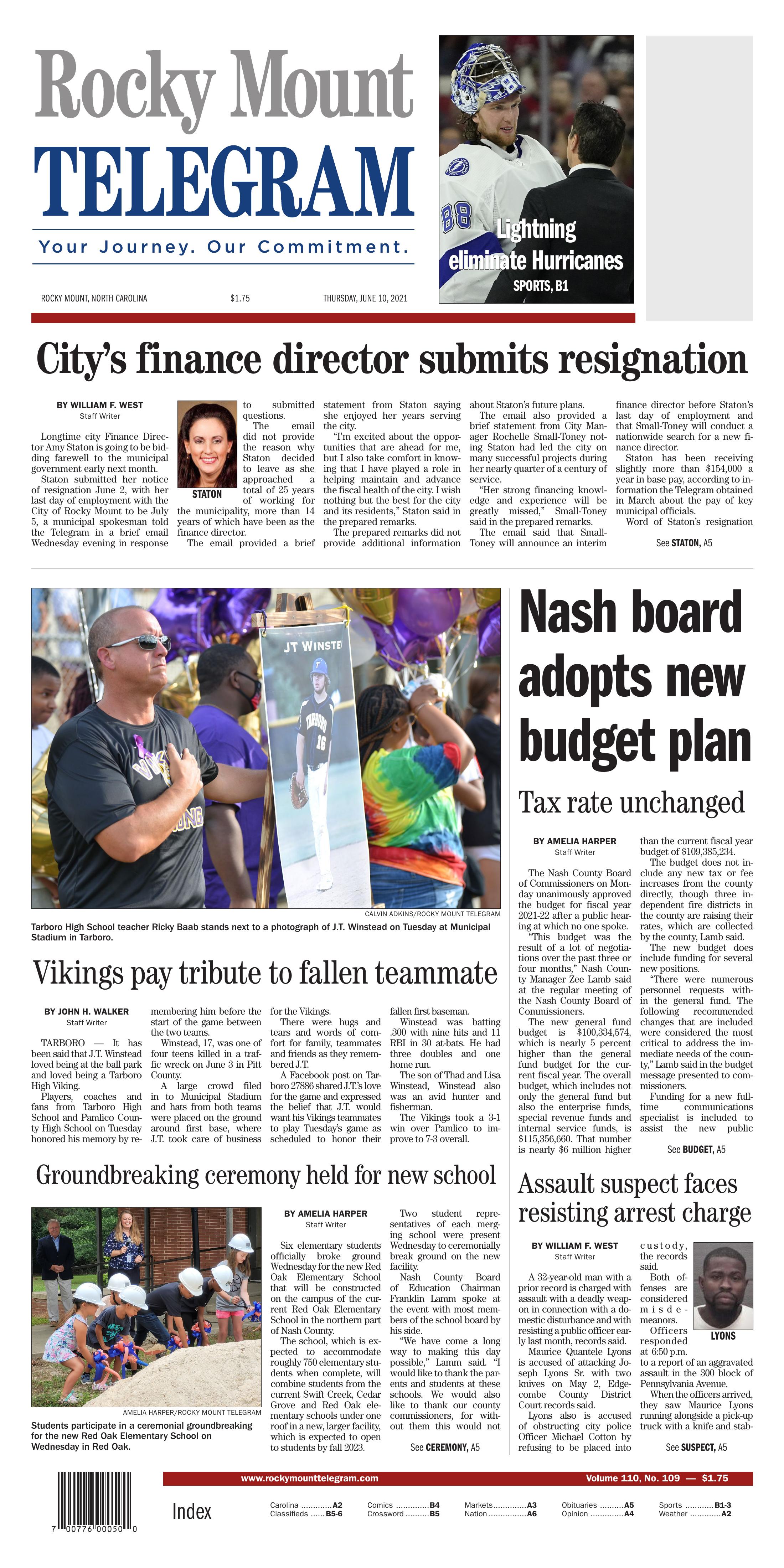 Longtime city Finance Director Amy Staton is going to be bidding farewell to the municipal government early next month.

Staton submitted her notice of resignation June 2, with her last day of employment with the City of Rocky Mount to be July 5, a municipal spokesman told the Telegram in a brief email Wednesday evening in response to submitted questions.

The email did not provide the reason why Staton decided to leave as she approached a total of 25 years of working for the municipality, more than 14 years of which have been as the finance director.

The email provided a brief statement from Staton saying she enjoyed her years serving the city.

“I’m excited about the opportunities that are ahead for me, but I also take comfort in knowing that I have played a role in helping maintain and advance the fiscal health of the city. I wish nothing but the best for the city and its residents,” Staton said in the prepared remarks.

The prepared remarks did not provide additional information about Staton’s future plans.

The email also provided a brief statement from City Manager Rochelle Small-Toney noting Staton had led the city on many successful projects during her nearly quarter of a century of service.

“Her strong financing knowledge and experience will be greatly missed,” Small-Toney said in the prepared remarks.

Staton has been receiving slightly more than $154,000 a year in base pay, according to information the Telegram obtained in March about the pay of key municipal officials.

Staton’s departure is going to close the book on a career with the city going to back to when she started in July 1996 as an accounting manager.

In February 2007, Staton was named the finance director.

A Telegram story that month about Staton being elevated said she filled the position that came open as a result of Finance Director Craig Kivett retiring.

The story said Staton served as acting finance manager during the search for Kivett’s successor and quoted Staton as saying Kivett had been grooming her for the leadership position. Staton was one of 20-25 applicants for the job and one of two whom the city interviewed.

The story also noted Staton, 39 at the time, being a Rocky Mount native with a bachelor’s degree in business administration from Meredith College.

The story noted Staton had previously worked as a controller at Heritage Hospital in Tarboro and as a staff accountant with McGladrey & Pullen.

Tarboro High School teacher Ricky Baab stands next to a photograph of J.T. Winstead on Tuesday at Municipal Stadium in Tarboro.

Players, coaches and fans from Tarboro High School and Pamlico County High School on Tuesday honored his memory by remembering him before the start of the game between the two teams.

Winstead, 17, was one of four teens killed in a traffic wreck on June 3 in Pitt County.

A large crowd filed in to Municipal Stadium and hats from both teams were placed on the ground around first base, where J.T. took care of business for the Vikings.

There were hugs and tears and words of comfort for family, teammates and friends as they remembered J.T.

A Facebook post on Tarboro 27886 shared J.T.’s love for the game and expressed the belief that J.T. would want his Vikings teammates to play Tuesday’s game as scheduled to honor their fallen first baseman.

Winstead was batting .300 with nine hits and 11 RBI in 30 at-bats. He had three doubles and one home run.

The son of Thad and Lisa Winstead, Winstead also was an avid hunter and fisherman.

The Vikings took a 3-1 win over Pamlico to improve to 7-3 overall.

Two student representatives of each merging school were present Wednesday to ceremonially break ground on the new facility.

Nash County Board of Education Chairman Franklin Lamm spoke at the event with most members of the school board by his side.

“We have come a long way to making this day possible,” Lamm said. “I would like to thank the parents and students at these schools. We would also like to thank our county commissioners, for without them this would not be possible. We have numerous meetings and quite a few discussions, but we have been all in to make this day possible.”

Nash County Board of Commissioners Chairman Robbie Davis also spoke at the event where most of his fellow commissioners were present.

“I think children will have a much better chance of learning in this brand new, very modern, high-tech facility with advanced safety features,” Davis said.

The new Red Oak Elementary School will consist of an 87,297-square-foot single-story building equipped with administrative areas, a media center, cafeteria, classrooms, support and storage spaces as well as an 1,896-square-foot addition to the existing gymnasium.

The project also will include partial renovation to the existing 12,311-square-foot gymnasium building, according to a statement from Nash County Public Schools. The Oakley Collier Architect firm will oversee construction of the facility.

The school is expected to cost roughly $20 million including preliminary costs and furnishings. Roughly $10 million of that is coming in the form of a grant from the state of North Carolina while Nash County is footing the bill for the rest of the construction.

Davis on Wednesday praised the efforts of former state Sen. Rick Horner, who was present at the event, for his part in helping the county gain access to the grant.

“Rick is the one I think was the key person responsible for the $10 million grant that enabled us to move forward with this project,” Davis said.

Construction on the school is expected to begin this summer, but those efforts have been somewhat delayed by the scarce availability of steel at this time. Because of the delay, students who are attending Red Oak Elementary School will likely be moved into the new facility in January 2023 so that the current Red Oak Elementary School building can be demolished to make room for parking.

The Nash County Board of Commissioners on Monday unanimously approved the budget for fiscal year 2021-22 after a public hearing at which no one spoke.

“This budget was the result of a lot of negotiations over the past three or four months,” Nash County Manager Zee Lamb said at the regular meeting of the Nash County Board of Commissioners.

The budget does not include any new tax or fee increases from the county directly, though three independent fire districts in the county are raising their rates, which are collected by the county, Lamb said.

The new budget does include funding for several new positions.

“There were numerous personnel requests within the general fund. The following recommended changes that are included were considered the most critical to address the immediate needs of the county,” Lamb said in the budget message presented to commissioners.

Funding for a new full-time communications specialist is included to assist the new public communications department to address the growing need to keep area residents informed, Lamb said. The part-time farmers market coordinator will become full time due to increased activity with the Farmers Market.

Part-time security personnel are recommended for the Administrative Building to aid with security concerns, Lamb said. The county is building a new security station on the first floor of the administration building to help address these concerns.

Recommended personnel changes in the sheriff’s office include the reclassification of a captain’s position to a deputy position and adding three new full-time deputies. These changes will allow the four patrol shifts to add one extra deputy on each shift.

Lamb thanked commissioners for looking out for county employees.

“I want to thank commissioners for the generosity that they have shown to our employees over the past 36 months,” he said.

Over the past three years, commissioners have increased county salaries across the board with two 5 percent raises and two 3 percent raises, including the raise in the new budget.

“Compounded, that is a 16.9 percent increase, rounded to 17 percent, that this board has provided our employees,” Lamb said. “I can tell you that 90 percent of our employees very much appreciate the raises that you have provided.”

Lamb said he and his staff support a pay study by an outside independent human resources company.

“As I told the sheriff several times, that process will begin immediately, but it will be up to the board when or if any potential raises will be implemented after the study is complete,” he said.

“We cut that to $1.7 million in this recommended budget,” he said. “While that sounds like a lot of cuts, I feel that many of those requests can be deferred to other years. The $1.7 million is actually a doubling from the current year.”

A 32-year-old man with a prior record is charged with assault with a deadly weapon in connection with a domestic disturbance and with resisting a public officer early last month, records said.

Lyons also is accused of obstructing city police Officer Michael Cotton by refusing to be placed into custody, the records said.

Both offenses are considered misdemeanors.

Officers responded at 6:50 p.m. to a report of an aggravated assault in the 300 block of Pennsylvania Avenue in the Holly Street area of the city.

When the officers arrived, they saw Maurice Lyons running alongside a pickup truck with a knife and stabbing the side of the truck, police Cpl. Ricky Jackson said in a brief news release.

Lyons the day after he was arrested was released on a $2,500 secured bond, Edgecombe County District Court records said.