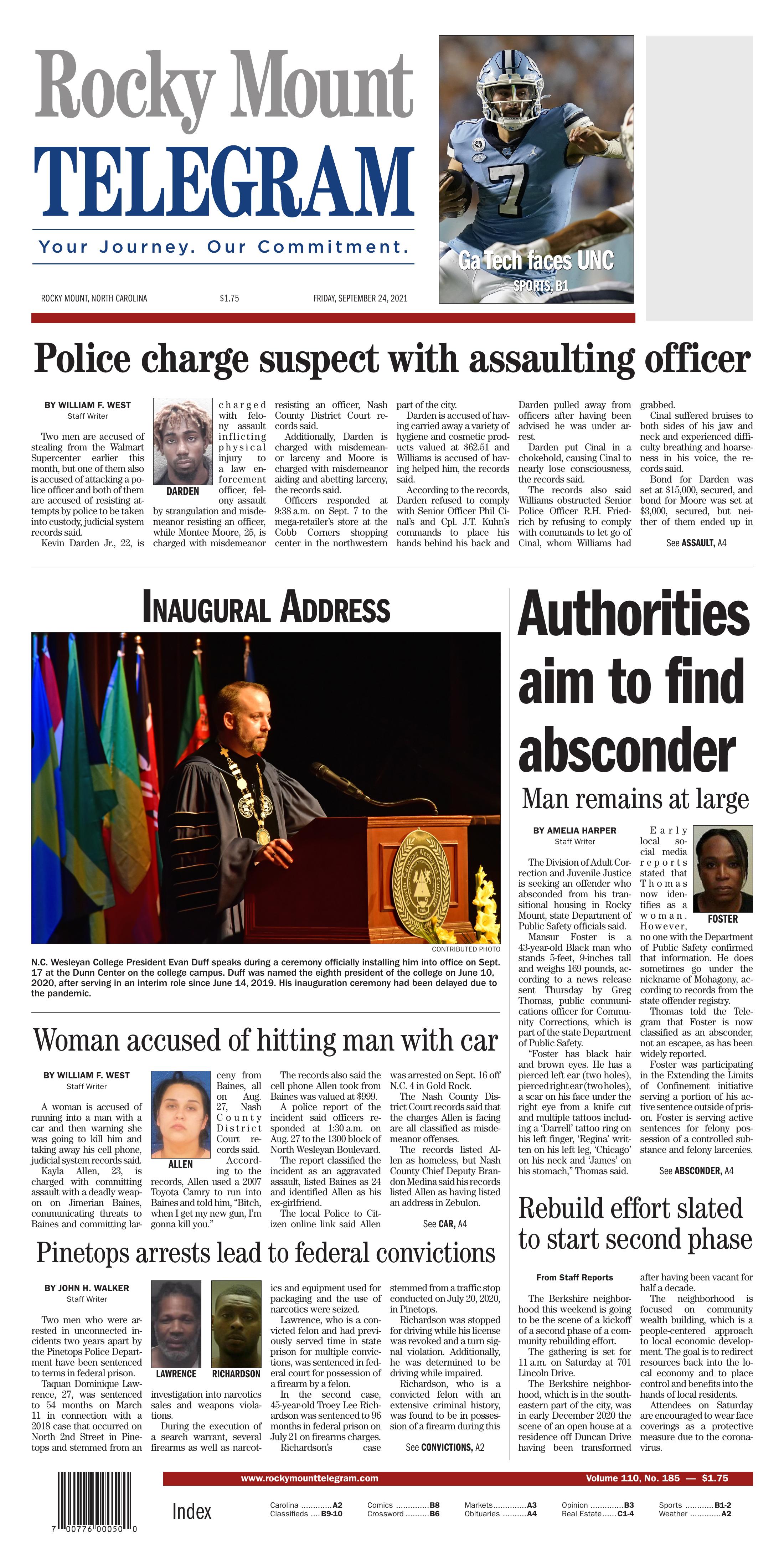 Photos by The Associated Press

Two men are accused of stealing from the Walmart Supercenter earlier this month, but one of them also is accused of attacking a police officer and both of them are accused of resisting attempts by police to be taken into custody, judicial system records said.

Officers responded at 9:38 a.m. on Sept. 7 to the mega-retailer’s store at the Cobb Corners shopping center in the northwestern part of the city.

According to the records, Darden refused to comply with Senior Officer Phil Cinal’s and Cpl. J.T. Kuhn’s commands to place his hands behind his back and Darden pulled away from officers after having been advised he was under arrest.

The records also said Williams obstructed Senior Police Officer R.H. Friedrich by refusing to comply with commands to let go of Cinal, whom Williams had grabbed.

Cinal suffered bruises to both sides of his jaw and neck and experienced difficulty breathing and hoarseness in his voice, the records said.

Whitehead was released on a written promise to appear in court as required, the records said.

Both Darden and Moore had listed addresses in the 1200 block of South Franklin Street, Nash County District Court records said. 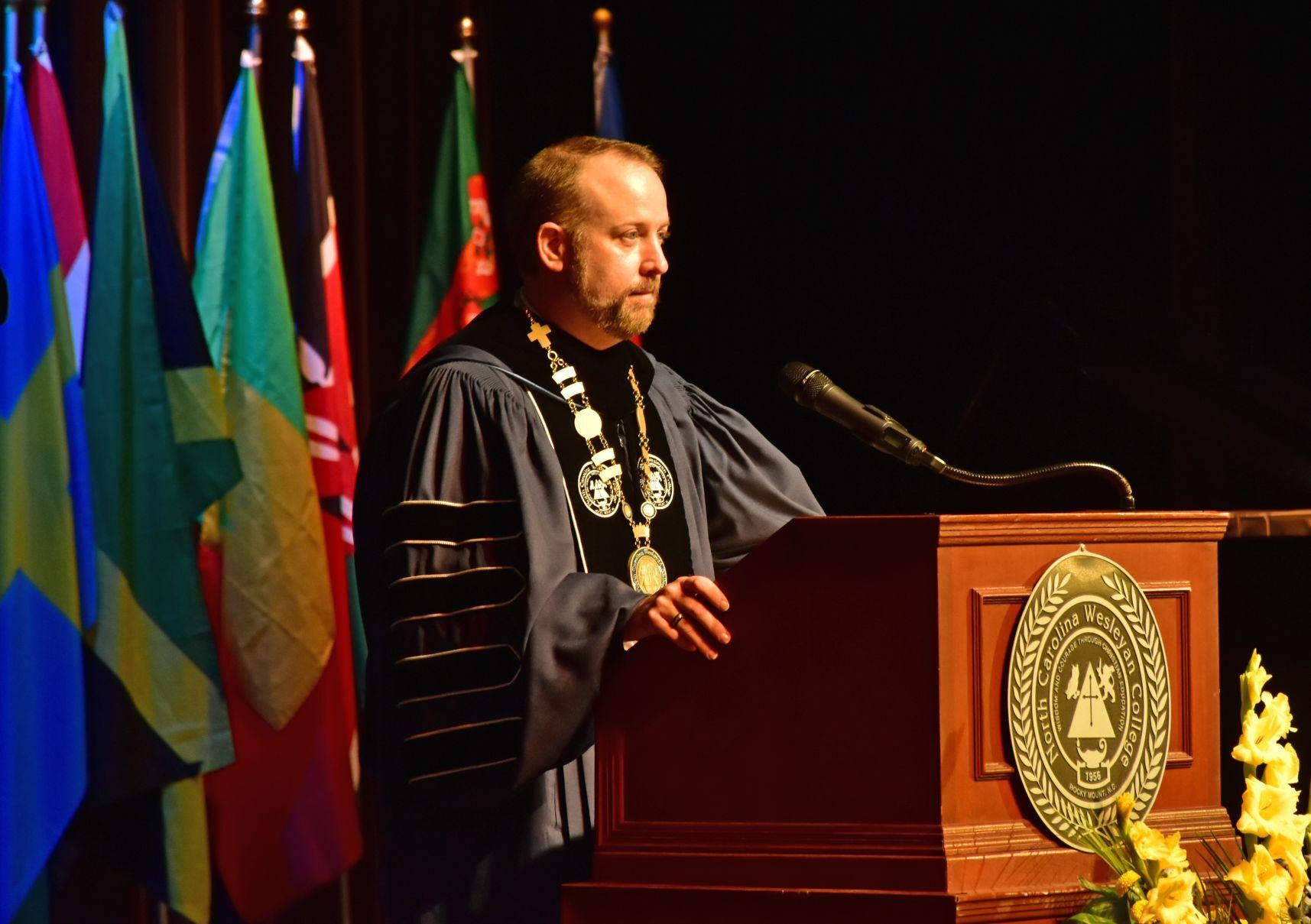 N.C. Wesleyan College President Evan Duff speaks during a ceremony officially installing him into office on Sept. 17 at the Dunn Center on the college campus.

A woman is accused of running into a man with a car and then warning she was going to kill him and taking away his cell phone, judicial system records said.

Kayla Allen, 23, is charged with committing assault with a deadly weapon on Jimerian Baines, communicating threats to Baines and committing larceny from Baines, all on Aug. 27, Nash County District Court records said.

According to the records, Allen used a 2007 Toyota Camry to run into Baines and told him, “Bitch, when I get my new gun, I’m gonna kill you.”

The records also said the cell phone Allen took from Baines was valued at $999.

A police report of the incident said officers responded at 1:30 a.m. on Aug. 27 to the 1300 block of North Wesleyan Boulevard.

The report classified the incident as an aggravated assault, listed Baines as 24 and identified Allen as his ex-girlfriend.

The local Police to Citizen online link said Allen was arrested on Sept. 16 off N.C. 4 in Gold Rock.

The Nash County District Court records said that the charges Allen is facing are all classified as misdemeanor offenses.

Medina also said his records listed Allen as having bonded out of the Nash County Detention Center after 13 hours in custody.

The bond was set at $2,500, secured, with the condition being that if Allen posted the bond then she was not to have any contact with Baines, the Nash County District Court records said.

Two men who were arrested in unconnected incidents two years apart by the Pinetops Police Department have been sentenced to terms in federal prison.

Taquan Dominique Lawrence, 27, was sentenced to 54 months on March 11 in connection with a 2018 case that occurred on North 2nd Street in Pinetops and stemmed from an investigation into narcotics sales and weapons violations.

During the execution of a search warrant, several firearms as well as narcotics and equipment used for packaging and the use of narcotics were seized.

Lawrence, who is a convicted felon and had previously served time in state prison for multiple convictions, was sentenced in federal court for possession of a firearm by a felon.

In the second case, 45-year-old Troey Lee Richardson was sentenced to 96 months in federal prison on July 21 on firearms charges.

Richardson’s case stemmed from a traffic stop conducted on July 20, 2020, in Pinetops.

Richardson was stopped for driving while his license was revoked and a turn signal violation. Additionally, he was determined to be driving while impaired.

Pinetops Police Chief Stacy Harrell said his agency works with the federal Bureau of Alcohol, Tobacco, Firearms and Explosives, other local agencies and the U.S. Attorney’s Office to prosecute weapons and violent crimes to the fullest.

He said a combination of hard work from his officers aided by the town’s camera system have proven to be an effective combination.

The Division of Adult Correction and Juvenile Justice is seeking an offender who absconded from his transitional housing in Rocky Mount, state Department of Public Safety officials said.

Mansur Foster is a 43-year-old Black man who stands 5-feet, 9-inches tall and weighs 169 pounds, according to a news release sent Thursday by Greg Thomas, public communications officer for Community Corrections, which is part of the state Department of Public Safety.

“Foster has black hair and brown eyes. He has a pierced left ear (two holes), pierced right ear (two holes), a scar on his face under the right eye from a knife cut and multiple tattoos including a ‘Darrell’ tattoo ring on his left finger, ‘Regina’ written on his left leg, ‘Chicago’ on his neck and ‘James’ on his stomach,” Thomas said.

Early local social media reports stated that Foster now identifies as a woman. However, no one with the Department of Public Safety confirmed that information. He does sometimes go under the nickname of Mohagony, according to records from the state offender registry.

Thomas told the Telegram that Foster is now classified as an absconder, not an escapee, as has been widely reported.

Foster was participating in the Extending the Limits of Confinement initiative serving a portion of his active sentence outside of prison. Foster is serving active sentences for felony possession of a controlled substance and felony larcenies. He had a projected release date of Nov. 5, 2021.

Thomas said that Foster has been working in the Rocky Mount area. However, he said he was not allowed to share information about his workplace.

“I do know that he had a job and was actually able to get one fairly quickly after he transitioned to the ELC program in May,” Thomas said.

The Extending the Limits of Confinement initiative allows certain inmates to serve the remainder of their prison sentence at home or in transitional housing. ELC is not an early release or commutation, Thomas said. Participants are still considered incarcerated and are supervised by probation/parole officers from Community Corrections. Violating the terms of ELC can result in the offender being returned to a correctional facility.

The program was started last year in response to the COVID pandemic, Thomas said.

“Navigating the uncharted waters of a modern-day pandemic has been difficult and challenging for everyone, particularly for people working and living in congregate housing settings. That’s one reason DPS is using existing provisions in state law to reduce the prison population to help reduce the spread of the virus,” Thomas said in a statement posted online explaining the program.

“The safety of our employees and those in our custody is our top priority,” Moose said in a news release explaining the initiative. “ELC is one of many initiatives the department has worked diligently on to help reduce the spread of COVID-19.”

More than 1,549 people have participated in ELC as of early September, Thomas said in a statement. Of those, 171 are active in ELC and finishing up their sentences.

More than 25 inmates have been returned to a correctional facility because they violated the terms of ELC. Foster will likely be among that number once he is located.

Probation/parole officers from Community Corrections are currently searching for Foster and an escape warrant is being sought. Anyone who knows Foster or knows his whereabouts is asked to contact local law enforcement or call 911.

Thomas said that Foster is not thought to be a threat to the public.

Members of the Berkshire Neighborhood Association attend an open house of a renovated residence in December 2020 in the 1800 block of Duncan Drive in Berkshire Acres.

The Berkshire neighborhood this weekend is going to be the scene of a kickoff of a second phase of a community rebuilding effort.

The Berkshire neighborhood, which is in the southeastern part of the city, was in early December 2020 the scene of an open house at a residence off Duncan Drive having been transformed after having been vacant for half a decade.

The neighborhood is focused on community wealth building, which is a people-centered approach to local economic development. The goal is to redirect resources back into the local economy and to place control and benefits into the hands of local residents.

Attendees on Saturday are encouraged to wear face coverings as a protective measure due to the coronavirus.