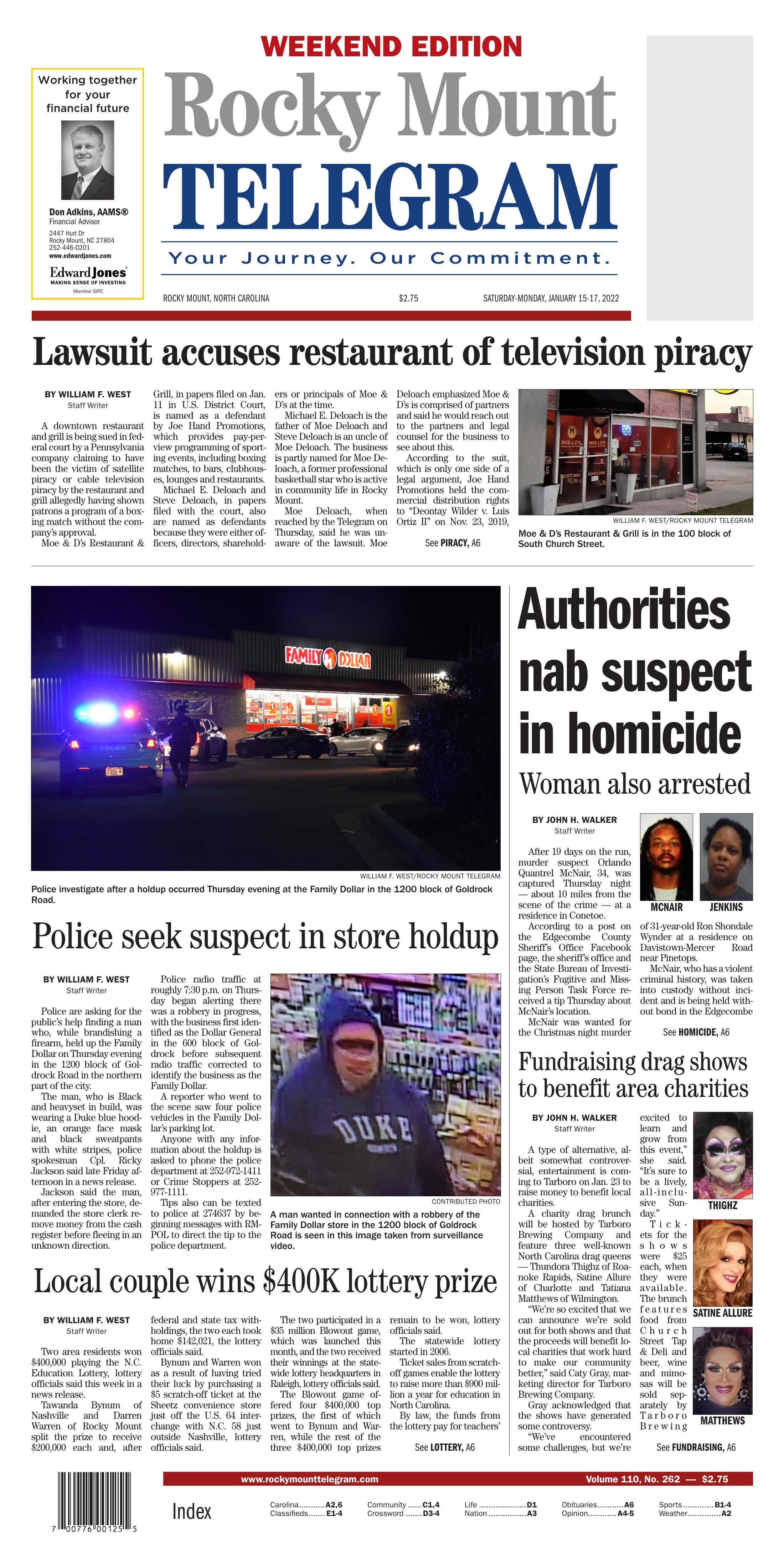 Moe & D’s Restaurant & Grill is in the 100 block of South Church Street.

A downtown restaurant and grill is being sued in federal court by a Pennsylvania company claiming to have been the victim of satellite piracy or cable television piracy by the restaurant and grill allegedly having shown patrons a program of a boxing match without the company’s approval.

Moe & D’s Restaurant & Grill, in papers filed on Jan. 11 in U.S. District Court, is named as a defendant by Joe Hand Promotions, which provides pay-per-view programming of sporting events, including boxing matches, to bars, clubhouses, lounges and restaurants.

Michael E. Deloach and Steve Deloach, in papers filed with the court, also are named as defendants because they were either officers, directors, shareholders or principals of Moe & D’s at the time.

Moe Deloach, when reached by the Telegram on Thursday, said he was unaware of the lawsuit. Moe Deloach emphasized Moe & D’s is comprised of partners and said he would reach out to the partners and legal counsel for the business to see about this.

According to the suit, which is only one side of a legal argument, Joe Hand Promotions held the commercial distribution rights to “Deontay Wilder v. Luis Ortiz II” on Nov. 23, 2019, including all preliminary bouts and commentary.

The boxing match was held in Las Vegas, Nev. Wilder defeated Ortiz in a knockout to keep the title of WBC heavyweight champion.

The lawsuit said that Joe Hand Promotions had the exclusive right to license and distribute the program about the match to commercial establishments throughout the nation. The program originated via satellite uplink and subsequently was re-transmitted to cable and satellite systems via satellite signal.

According to the suit, Joe Hand Promotions entered into subsequent agreements with various commercial establishments in North Carolina in which those establishments paid a fee for the right to show the program to their respective patrons.

The suit said that prior to the broadcast of the program, Moe & D’s and Michael E. Deloach and Steve Deloach could have contracted with Joe Hand Promotions and purchased the right to show the program for a fee at Moe & D’s but chose to neither sign a contract nor pay the fee for the proper license or authorization. At no time did Joe Hand Promotions give Moe & D’s or Michael E. Deloach and Steve Deloach license, permission or authority to receive and show the program at Moe & D’s.

The suit said the actions of Moe & D’s and Michael E. Deloach and Steve Deloach were committed with the purpose and intent to secure a commercial advantage and private financial gain.

Attorney Todd Jones of Anderson Jones in Raleigh is representing Joe Hand Promotions, which is based in Feasterville, Penn., which is northeast of Philadelphia.

The suit also seeks compensation for attorney’s fees, interest and costs of the legal action or any additional relief to which Joe Hand Promotions may be entitled.

A man wanted in connection with a robbery of the Family Dollar store in the 1200 block of Goldrock Road is seen in this image taken from surveillance video.

Police are asking for the public’s help finding a man who, while brandishing a firearm, held up the Family Dollar on Thursday evening in the 1200 block of Goldrock Road in the northern part of the city.

The man, who is Black and heavyset in build, was wearing a Duke blue hoodie, an orange face mask and black sweatpants with white stripes, police spokesman Cpl. Ricky Jackson said late Friday afternoon in a news release.

Jackson said the man, after entering the store, demanded the store clerk remove money from the cash register before fleeing in an unknown direction.

Police radio traffic at roughly 7:30 p.m. on Thursday began alerting there was a robbery in progress, with the business first identified as the Dollar General in the 600 block of Goldrock before subsequent radio traffic corrected to identify the business as the Family Dollar.

A reporter who went to the scene saw four police vehicles in the Family Dollar’s parking lot.

Tips also can be texted to police at 274637 by beginning messages with RMPOL to direct the tip to the police department.

And messages can be sent to police via the MyRMT mobile app.

Tawanda Bynum of Nashville and Darren Warren of Rocky Mount split the prize to receive $200,000 each and, after federal and state tax withholdings, the two each took home $142,021, the lottery officials said.

Bynum and Warren won as a result of having tried their luck by purchasing a $5 scratch-off ticket at the Sheetz convenience store just off the U.S. 64 interchange with N.C. 58 just outside Nashville, lottery officials said.

The two participated in a $35 million Blowout game, which was launched this month, and the two received their winnings at the statewide lottery headquarters in Raleigh, lottery officials said.

The statewide lottery started in 2006.

Ticket sales from scratch-off games enable the lottery to raise more than $900 million a year for education in North Carolina.

By law, the funds from the lottery pay for teachers’ salaries from kindergarten up to third grade, along with school construction, pre-kindergarten programs for at-risk 4-year-olds and college scholarships and financial aid based on need.

The lottery website said that in Nash County, in which the U.S. 64 at N.C. 58 Sheetz is located, education programs in the county received slightly more than $4.8 million in funds from the lottery in the fiscal year 2020.

After 19 days on the run, murder suspect Orlando Quantrel McNair, 34, was captured Thursday night — about 10 miles from the scene of the crime — at a residence in Conetoe.

According to a post on the Edgecombe County Sheriff’s Office Facebook page, the sheriff’s office and the State Bureau of Investigation’s Fugitive and Missing Person Task Force received a tip Thursday about McNair’s location.

McNair was wanted for the Christmas night murder of 31-year-old Ron Shondale Wynder at a residence on Davistown-Mercer Road near Pinetops.

McNair, who has a violent criminal history, was taken into custody without incident and is being held without bond in the Edgecombe County Detention Center.

Also arrested was Brandan Jenkins, 35, of 111 E. Thigpen Road in Conetoe. Jenkins was allowing McNair to stay at her home and was charged with harboring a fugitive from justice. She was jailed under a $125,000 bond in the Edgecombe County Detention Center.

Edgecombe County Sheriff Clee Atkinson said McNair’s arrest was due to long and countless hours of work put into the case by the SBI and his detective division that led to the development of the tip. A reward of up to $5,000 had been offered for information about the case by Team Cold Case.

McNair had been on the run since the Christmas night murder of Wynder near Pinetops.

Edgecombe County deputies responded to a call at 10:06 p.m. that night about a shooting at the residence.

Upon arrival, Wynder’s body was found inside the house, dead from gunshots.

Wynder’s girlfriend, who witnessed the shooting, was able to tell deputies that McNair was responsible for the shooting and why it occurred.

At the time, McNair was also wanted for the kidnapping of the woman’s three children, of whom he is the father. The children were found safe a short time later.

A type of alternative, albeit somewhat controversial, entertainment is coming to Tarboro on Jan. 23 to raise money to benefit local charities.

“We’re so excited that we can announce we’re sold out for both shows and that the proceeds will benefit local charities that work hard to make our community better,” said Caty Gray, marketing director for Tarboro Brewing Company.

Gray acknowledged that the shows have generated some controversy.

“We’ve encountered some challenges, but we’re excited to learn and grow from this event,” she said. “It’s sure to be a lively, all-inclusive Sunday.”

Tickets for the shows were $25 each, when they were available. The brunch features food from Church Street Tap & Deli and beer, wine and mimosas will be sold separately by Tarboro Brewing Company, with cash or card accepted for alcohol purchases.

Gray said the selection of the time for the shows — on a Sunday morning and early afternoon — were based strictly on scheduling.

“We’re usually closed then, so we were available, and it gave us the opportunity to partner with another downtown business, generate some revenue and help organizations who help others,” she said.