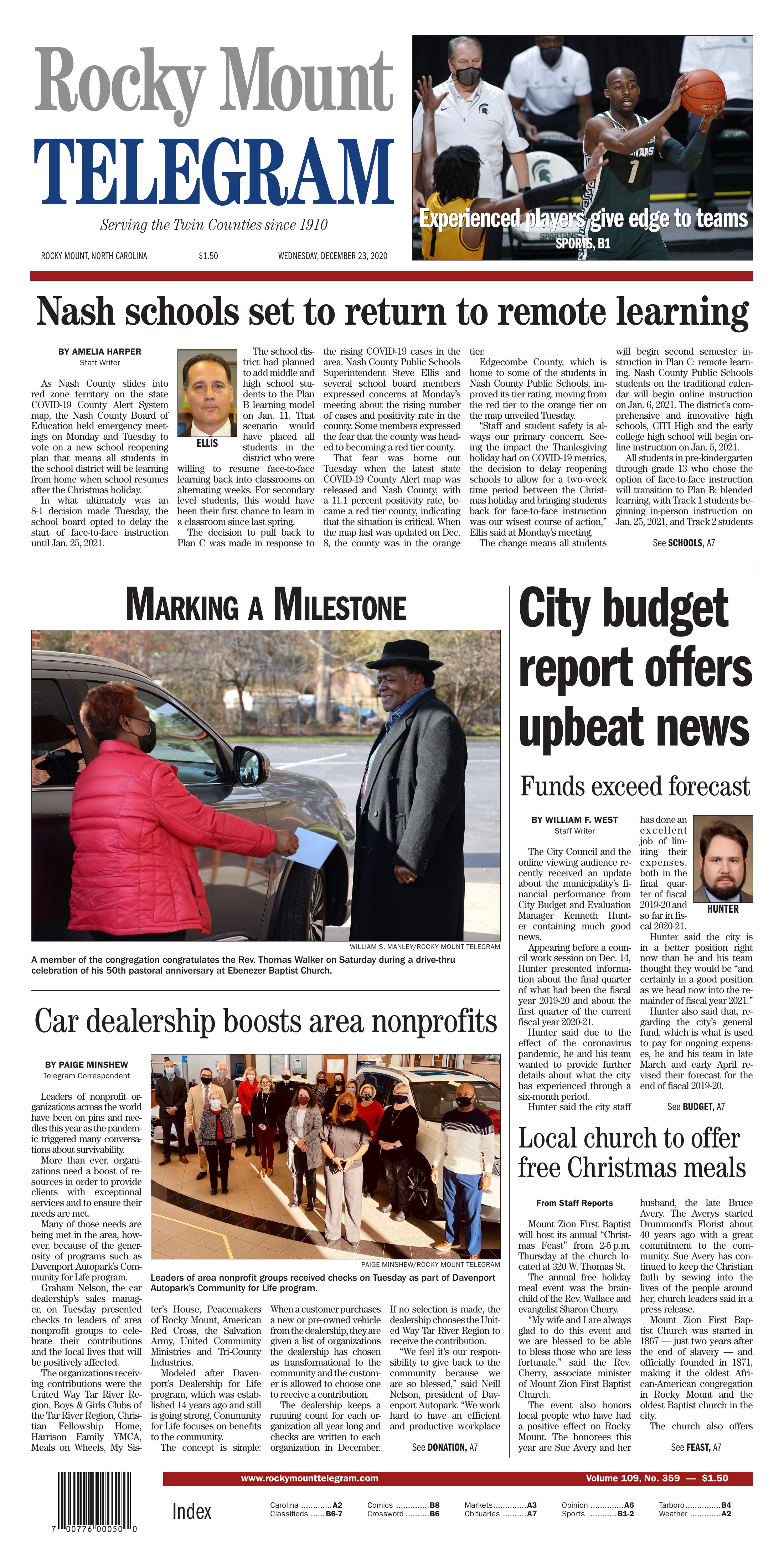 As Nash County slides into red zone territory on the state COVID-19 County Alert System map, the Nash County Board of Education held emergency meetings on Monday and Tuesday to vote on a new school reopening plan that means all students in the school district will be learning from home when school resumes after the Christmas holiday.

In what ultimately was an 8-1 decision made Tuesday, the school board opted to delay the start of face-to-face instruction until Jan. 25, 2021.

The school district had planned to add middle and high school students to the Plan B learning model on Jan. 11. That scenario would have placed all students in the district who were willing to resume face-to-face learning back into classrooms on alternating weeks. For secondary level students, this would have been their first chance to learn in a classroom since last spring.

The decision to pull back to Plan C was made in response to the rising COVID-19 cases in the area. Nash County Public Schools Superintendent Steve Ellis and several school board members expressed concerns at Monday’s meeting about the rising number of cases and positivity rate in the county. Some members expressed the fear that the county was headed to becoming a red tier county.

That fear was borne out Tuesday when the latest state COVID-19 County Alert map was released and Nash County, with a 11.1 percent positivity rate, became a red tier county, indicating that the situation is critical. When the map last was updated on Dec. 8, the county was in the orange tier.

Edgecombe County, which is home to some of the students in Nash County Public Schools, improved its tier rating, moving from the red tier to the orange tier on the map unveiled Tuesday.

“Staff and student safety is always our primary concern. Seeing the impact the Thanksgiving holiday had on COVID-19 metrics, the decision to delay reopening schools to allow for a two-week time period between the Christmas holiday and bringing students back for face-to-face instruction was our wisest course of action,” Ellis said at Monday’s meeting.

All students in pre-kindergarten through grade 13 who chose the option of face-to-face instruction will transition to Plan B: blended learning, with Track 1 students beginning in-person instruction on Jan. 25, 2021, and Track 2 students beginning in-person instruction on Feb, 1, 2021, according to a statement from the school district. Under Plan B, families have the option of choosing to remain on the virtual track or attending school for face-to-face learning Monday through Thursday every other week.

School board members discussed the issue in detail during a roughly 30-minute meeting held virtually on Monday afternoon. However, the challenges of voting on such issues virtually became apparent at that meeting and necessitated a second virtual meeting Tuesday morning.

At Monday’s meeting, school board member Reginald Silver was absent and the vote on the issue appeared to be a 6-4 decision, with Evelyn Bulluck, who made the motion, ultimately voting against the measure. Board Chairman Franklin Lamm declared the vote as passed.

However, it later was discovered that the votes were miscounted due to the confusion caused by the modified Zoom format. The vote later was declared a 5-5 tie vote and a second meeting was scheduled for Tuesday morning to clarify the decision and break the tie.

At that meeting, the motion to delay face-to-face learning until at least Jan. 25 passed by an 8-2 margin with Silver again absent from the meeting. School board members Dean Edwards and Ricky Jenkins opposed the delay in face-to-face instruction during that vote.

However, Lamm then realized that a true motion and second had not been made in accordance with parliamentary procedure. To make the vote official, he then asked for a motion, a second and another official vote. But by this time, Jenkins had dropped out of the call and the motion officially passed 8-1 with Edwards as the lone holdout.

School board members plan to re-examine the issue and seek further advice from Ellis and school district staff at the next board meeting planned for Jan. 7. The decision as to when to bring students back into the classroom may be adjusted then as more recent data becomes available. 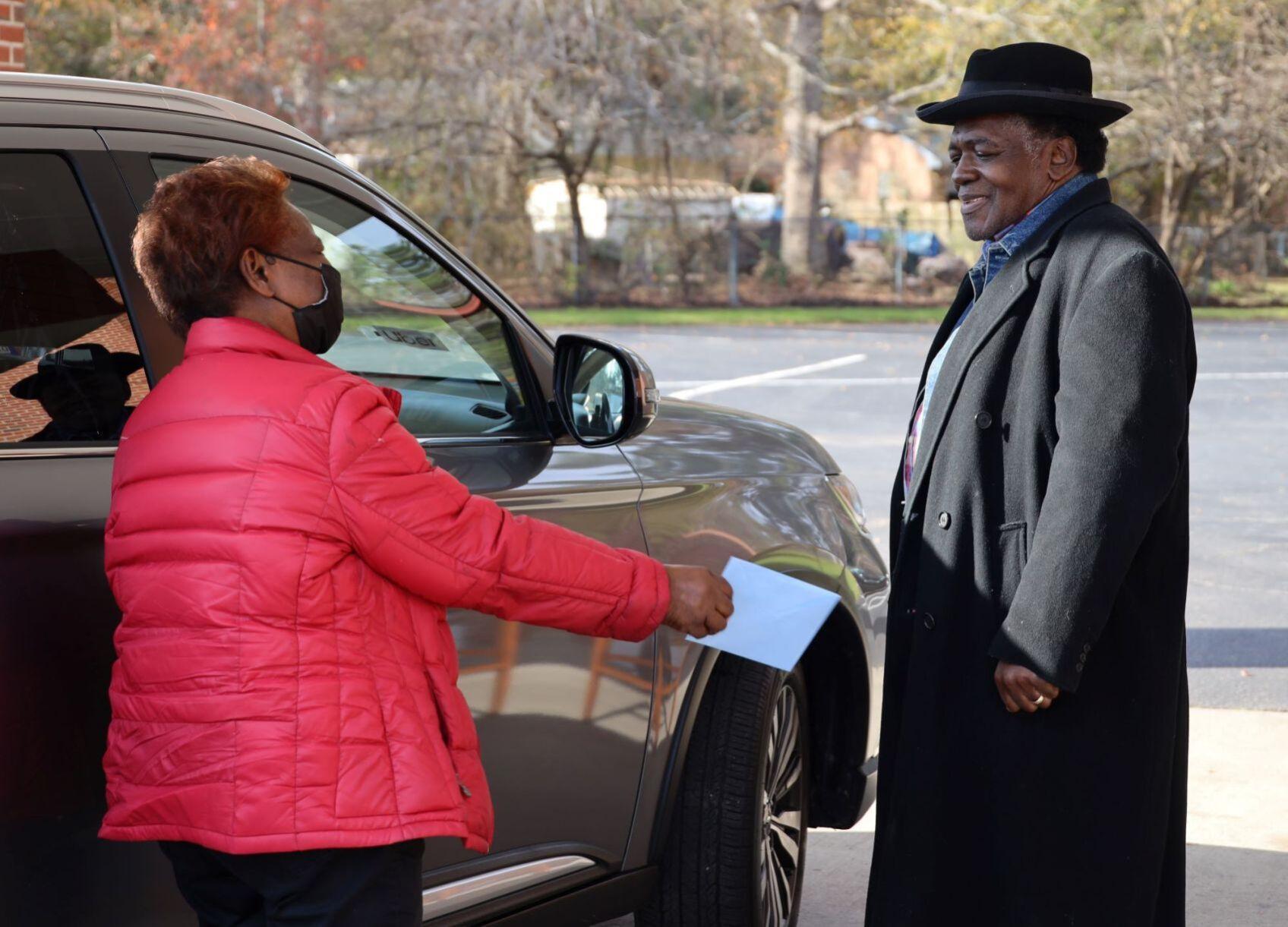 A member of the congregation congratulates the Rev. Thomas Walker on Saturday during a drive-thru celebration of his 50th pastoral anniversary at Ebenezer Baptist Church.

Leaders of nonprofit organizations across the world have been on pins and needles this year as the pandemic triggered many conversations about survivability.

More than ever, organizations need a boost of resources in order to provide clients with exceptional services and to ensure their needs are met.

Many of those needs are being met in the area, however, because of the generosity of programs such as Davenport Autopark’s Community for Life program.

Graham Nelson, the car dealership’s sales manager, on Tuesday presented checks to leaders of area nonprofit groups to celebrate their contributions and the local lives that will be positively affected.

Modeled after Davenport’s Dealership for Life program, which was established 14 years ago and still is going strong, Community for Life focuses on benefits to the community.

The concept is simple: When a customer purchases a new or pre-owned vehicle from the dealership, they are given a list of organizations the dealership has chosen as transformational to the community and the customer is allowed to choose one to receive a contribution.

“We feel it’s our responsibility to give back to the community because we are so blessed,” said Neill Nelson, president of Davenport Autopark. “We work hard to have an efficient and productive workplace so we can allocate more resources to the causes we believe in.”

“It’s important to us to show the community we aren’t only in the money-making business. We work hard so we can help those who need it most,” he said.

Davenport Autopark was started in 1929 by the late David Davenport, Neill Nelson’s grandfather, and is in its fourth location in Rocky Mount just off Winstead Avenue at 600 English Road.

Davenport Autopark has won numerous awards for automotive excellence and has been voted “Best Automotive Dealership” in the Twin Counties for the past 10 years by readers of the Rocky Mount Telegram.

The City Council and the online viewing audience recently received an update about the municipality’s financial performance from City Budget and Evaluation Manager Kenneth Hunter containing much good news.

Hunter said due to the effect of the coronavirus pandemic, he and his team wanted to provide further details about what the city has experienced through a six-month period.

Hunter said the city staff has done an excellent job of limiting their expenses, both in the final quarter of fiscal 2019-20 and so far in fiscal 2020-21.

Hunter said the city is in a better position right now than he and his team thought they would be “and certainly in a good position as we head now into the remainder of fiscal year 2021.”

Hunter also said that, regarding the city’s general fund, which is what is used to pay for ongoing expenses, he and his team in late March and early April revised their forecast for the end of fiscal 2019-20.

Hunter emphasized that he and his team brought forward a proposed budget for fiscal 2020-21 with a forecast of revenues reduced to accommodate for an anticipated economic impact in a variety of areas, predominantly in sales taxes, as well as in other revenues the city receives.

“We are happy to report, however, that so far during that six-month period of time, both the final quarter of 2020 and the first quarter of 2021, that our revenues did exceed our COVID-adjusted forecast,” Hunter said.

Hunter also said that while he and his team were greatly concerned about a potential significant drop in local option sales tax revenues, the figures have remained strong and have been relatively stable with respect to performance over time.

Hunter said that when he and his team did their forecast at the end of March, they anticipated some significant reductions in revenues across several areas and projected about $12.6 million in revenues generated in the final few months of fiscal 2019-20.

Hunter said the city actually over-collected by about 21 percent, at roughly $15.3 million.

“And that enabled us to finish the fiscal year in a strong position financially. It allowed us to return money to fund balance,” Hunter said.

Hunter emphasized that this in turn allowed the city to be in a position he and his team knew meant the city would be in proper shape to move forward.

Hunter said that in the first quarter of the fiscal year 2020-21, he and his team continued to reduce the forecast, down to only roughly $10.4 million in revenues. He said the city generated about $10.6 million during that time.

“So we were close overall with respect to revenues, but the good news was that we were still performing above the anticipated forecast,” Hunter said. “Even if it’s a smaller amount, we still feel confident about where we are in our forecasting going forward.”

Hunter also showed a chart to illustrate how local option sales tax revenues consistently came in above forecasts from April into September.

A local option sales tax is created for a specific purpose, namely in Rocky Mount’s and Nash County’s case to generate revenue from guests in hotel and motel rooms.

July was the one exception to the better-than-projected forecast for local option sales tax revenues.

Hunter said that due to accounting rules, the July revenues are charged back to fiscal 2019-20, which are shown in the results for June 2020.

Hunter also provided an update about enterprise funds, which include electricity and natural gas, sewer and water and stormwater so far in the fiscal year 2020-21.

Hunter said that overall those funds remain in good shape, but he and his team have noticed some decreases — but not significant decreases — in sales to residential customers as well as sales to commercial and industrial customers.

Hunter said some of that is due to conservation and some is due to COVID-19-related activity.

Hunter also said there was some manageable capital improvement activity for electric and natural gas services.

Documents provided to the council by Hunter show the electric fund was at more than $21.7 million in revenues compared to more than $16 million in spending.

Hunter said the city is above where it was last year with respect to sewer revenues.

“And what we’re trying to do, particularly with the sewer fund, is trying to ensure that we are returning funds to fund balance at the end of this fiscal year, while at the same time continuing to address our necessary capital infrastructure needs,” Hunter said.

The annual free holiday meal event was the brainchild of the Rev. Wallace and evangelist Sharon Cherry.

“My wife and I are always glad to do this event and we are blessed to be able to bless those who are less fortunate,” said the Rev. Cherry, associate minister of Mount Zion First Baptist Church.

The event also honors local people who have had a positive effect on Rocky Mount. The honorees this year are Sue Avery and her husband, the late Bruce Avery. The Averys started Drummond’s Florist about 40 years ago with a great commitment to the community. Sue Avery has continued to keep the Christian faith by sewing into the lives of the people around her, church leaders said in a press release.

Mount Zion First Baptist Church was started in 1867 — just two years after the end of slavery — and officially founded in 1871, making it the oldest African-American congregation in Rocky Mount and the oldest Baptist church in the city.

The church also offers emergency services for those in need of help and soon will launch long-term recovery programs and services to people needing and wanting to change their current life circumstances in an effort to become their best selves.

For more information about Mount Zion First Baptist Church and this event, call 252-442-1627, email mzfbc1871@gmail.com or visit the church’s Facebook page at www.https://www.facebook.com/Mountzionfirstbaptistchurch.