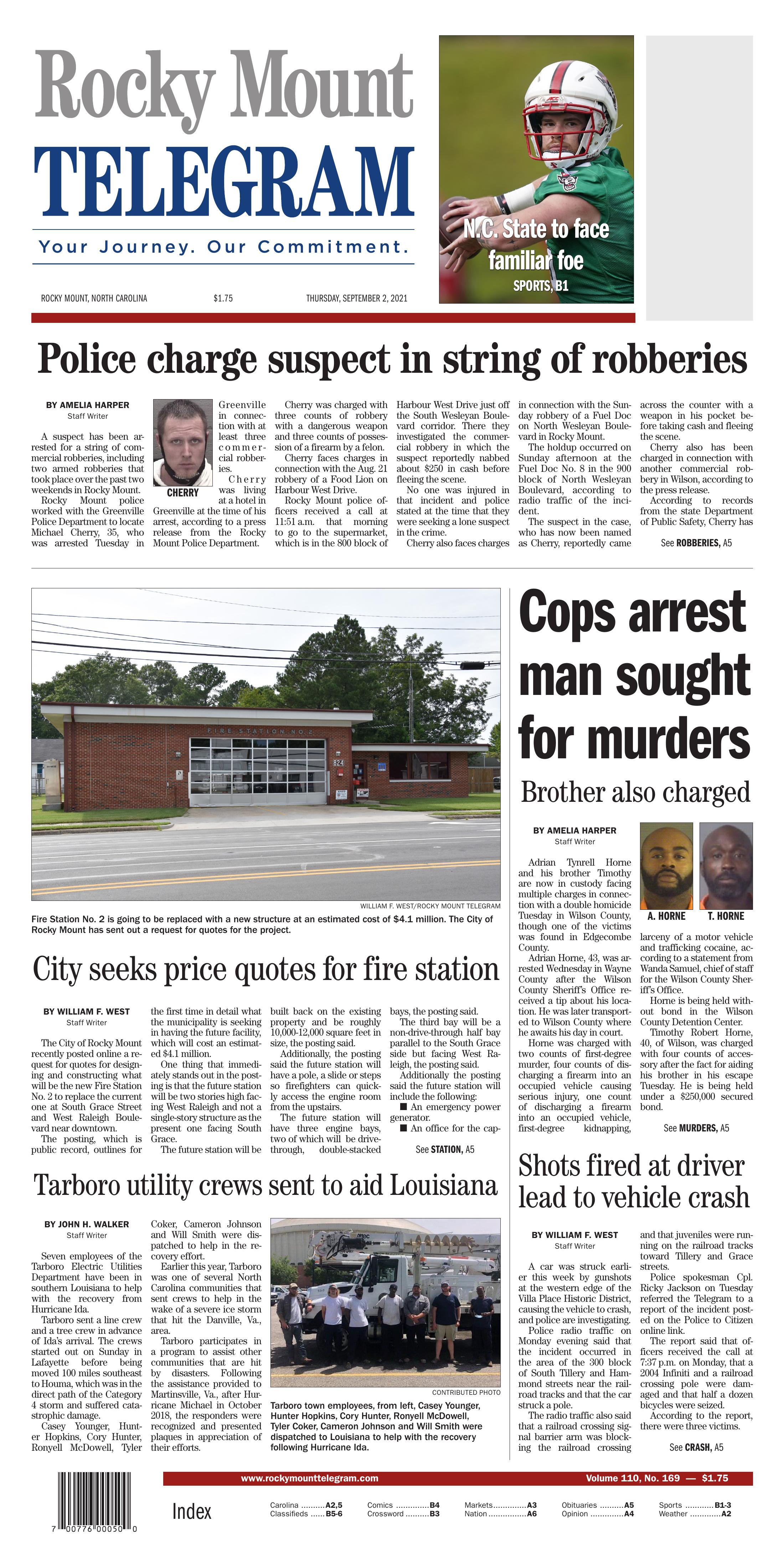 A suspect has been arrested for a string of commercial robberies, including two armed robberies that took place over the past two weekends in Rocky Mount.

Rocky Mount police worked with the Greenville Police Department to locate Michael Cherry, 35, who was arrested Tuesday in Greenville in connection with at least three commercial robberies.

Cherry was living at a hotel in Greenville at the time of his arrest, according to a press release from the Rocky Mount Police Department.

Cherry faces charges in connection with the Aug. 21 robbery of a Food Lion on Harbour West Drive.

Rocky Mount police officers received a call at 11:51 a.m. that morning to go to the supermarket, which is in the 800 block of Harbour West Drive just off the South Wesleyan Boulevard corridor. There they investigated the commercial robbery in which the suspect reportedly nabbed about $250 in cash before fleeing the scene.

No one was injured in that incident and police stated at the time that they were seeking a lone suspect in the crime.

Cherry also faces charges in connection with the Sunday robbery of a Fuel Doc on North Wesleyan Boulevard in Rocky Mount.

The holdup occurred on Sunday afternoon at the Fuel Doc No. 8 in the 900 block of North Wesleyan Boulevard, according to radio traffic of the incident.

The suspect in the case, who has now been named as Cherry, reportedly came across the counter with a weapon in his pocket before taking cash and fleeing the scene.

Cherry also has been charged in connection with another commercial robbery in Wilson, according to the press release.

According to records from the state Department of Public Safety, Cherry has been convicted on multiple counts of felony breaking and entering and common law forgery ranging as far back as 2005.

Fire Station No. 2 is going to be replaced with a new structure at an estimated cost of $4.1 million.

A fire-related safety sign hangs on the fence at Fire Station No. 2 on Tuesday. The station is going to be replaced with a new structure at an estimated cost of $4.1 million.

The City of Rocky Mount recently posted online a request for quotes for designing and constructing what will be the new Fire Station No. 2 to replace the current one at South Grace Street and West Raleigh Boulevard near downtown.

The posting, which is public record, outlines for the first time in detail what the municipality is seeking in having the future facility, which will cost an estimated $4.1 million.

One thing that immediately stands out in the posting is that the future station will be two stories high facing West Raleigh and not a single-story structure as the present one facing South Grace.

The future station will be built back on the existing property and be roughly 10,000-12,000 square feet in size, the posting said.

Additionally, the posting said the future station will have a pole, a slide or steps so firefighters can quickly access the engine room from the upstairs.

The future station will have three engine bays, two of which will be drive-through, double-stacked bays, the posting said.

The third bay will be a non-drive-through half bay parallel to the South Grace side but facing West Raleigh, the posting said.

Additionally the posting said the future station will include the following:

The posting also includes the future station having for the public at the front entrance what is called a panic room. Generally, a panic room is a place where a person or persons can hole up for safety reasons.

The request for quotes was issued on Aug. 17 and the deadline for responses is 2 p.m. on Sept. 16.

The Telegram on May 29 reported that Assistant to the City Manager for Budget and Evaluation Kenneth Hunter told the council the largest proposed municipal services improvement project, from a financial perspective, for the at-the-time proposed fiscal year 2021-22 budget would be to replace Fire Station No. 2.

Hunter told the council that Fire Station No. 2 is no longer in a condition or position to be an effective place to house fire engines and firefighting equipment.

The council on June 28 approved the fiscal year 2021-22 budget with the future fire station as the top priority for construction projects.

Seven employees of the Tarboro Electric Utilities Department have been in southern Louisiana to help with the recovery from Hurricane Ida.

Tarboro sent a line crew and a tree crew in advance of Ida’s arrival. The crews started out on Sunday in Lafayette before being moved 100 miles southeast to Houma, which was in the direct path of the Category 4 storm and suffered catastrophic damage.

Earlier this year, Tarboro was one of several North Carolina communities that sent crews to help in the wake of a severe ice storm that hit the Danville, Va., area.

Tarboro participates in a program to assist other communities that are hit by disasters. Following the assistance provided to Martinsville, Va., after Hurricane Michael in October 2018, the responders were recognized and presented plaques in appreciation of their efforts.

Adrian Tynrell Horne and his brother Timothy are now in custody facing multiple charges in connection with a double homicide Tuesday in Wilson County, though one of the victims was found in Edgecombe County.

Adrian Horne, 43, was arrested Wednesday in Wayne County after the Wilson County Sheriff’s Office received a tip about his location. He was later transported to Wilson County where he awaits his day in court.

Horne is being held without bond in the Wilson County Detention Center.

Timothy Robert Horne, 40, of Wilson, was charged with four counts of accessory after the fact for aiding his brother in his escape Tuesday. He is being held under a $250,000 secured bond.

According to information provided in a news release from the Wilson County Sheriff’s Office, Adrian Horne was living with his girlfriend, 44-year-old Latasha Tennill Tomlin. The crime spree appears to have begun Tuesday at their shared home on London Church Road in Wilson.

Horne and Tomlin reportedly got into an argument that prompted Tomlin to leave the home. Several of her family members were present at the scene to support Tomlin.

“It has been stated that the victims were at the London Church Road home to assist Latasha Tomlin with leaving,” Samuel said in a statement.

In the aftermath of the incident, Tomlin’s son, 21-year-old Raekwon Tyleek Williams, was found dead in the home. He succumbed to multiple gunshot wounds, according to the news release.

Raekwon Williams’ live-in girlfriend, Lakiyah Williams, 18, also was reportedly shot in the back during the incident. However, she was treated for her injuries and released.

The 8-month-old child that was allegedly kidnapped during the incident is the child of Raekwon and Lakiyah Williams. The infant was later found in Edgecombe County and has since been reunited with the mother.

Tomlin’s daughter, 18-year-old Fredria Williams, also was allegedly shot by Horne during the incident. At last report, she was hospitalized in critical condition, Samuel said.

Horne also allegedly killed his girlfriend, Latasha Tomlin, during the incident. He fled the scene of the carnage in a black Buick with Tomlin and her grandchild in tow. Tomlin’s body was found in the abandoned vehicle later Tuesday in Edgecombe County. The baby was found elsewhere in Edgecombe County unharmed.

Horne was quickly named as a suspect in the homicides. After a manhunt lasting more than 24 hours, a search warrant was issued for 3201 Central Heights Road in Goldsboro, Lot 200, in response to a tip regarding his location. The State Bureau of Investigation Violent Crime Apprehension Team Unit, the Goldsboro Police Department and Wayne County Sheriff’s Office executed a search warrant at the scene, which led to the capture of Horne and the seizure of two handguns.

“Mr. Horne was armed and dangerous and now he has been removed from the community, and he will no longer be able to harm anyone else,” Wilson County Sheriff Calvin Woodard said in a statement.

Woodard also expressed appreciation for the help of the multiple law enforcement agencies who assisted in the investigation and the capture of the suspect.

Crime
Car crashes into pole after shots fired at driver

A car was struck earlier this week by gunshots at the western edge of the Villa Place Historic District, causing the vehicle to crash, and police are investigating.

Police radio traffic on Monday evening said that the incident occurred in the area of the 300 block of South Tillery and Hammond streets near the railroad tracks and that the car struck a pole.

Police spokesman Cpl. Ricky Jackson on Tuesday referred the Telegram to a report of the incident posted on the Police to Citizen online link.

The report said that officers received the call at 7:37 p.m. on Monday, that a 2004 Infiniti and a railroad crossing pole were damaged and that half a dozen bicycles were seized.

According to the report, there were three victims.

The report identified victim No. 1 as Christian Stallings, 19; victim No. 2 as Evelyn Kirby, 25; and victim No. 3 as Carolina Coastal Railway.

The report said there were no reports of any injuries.