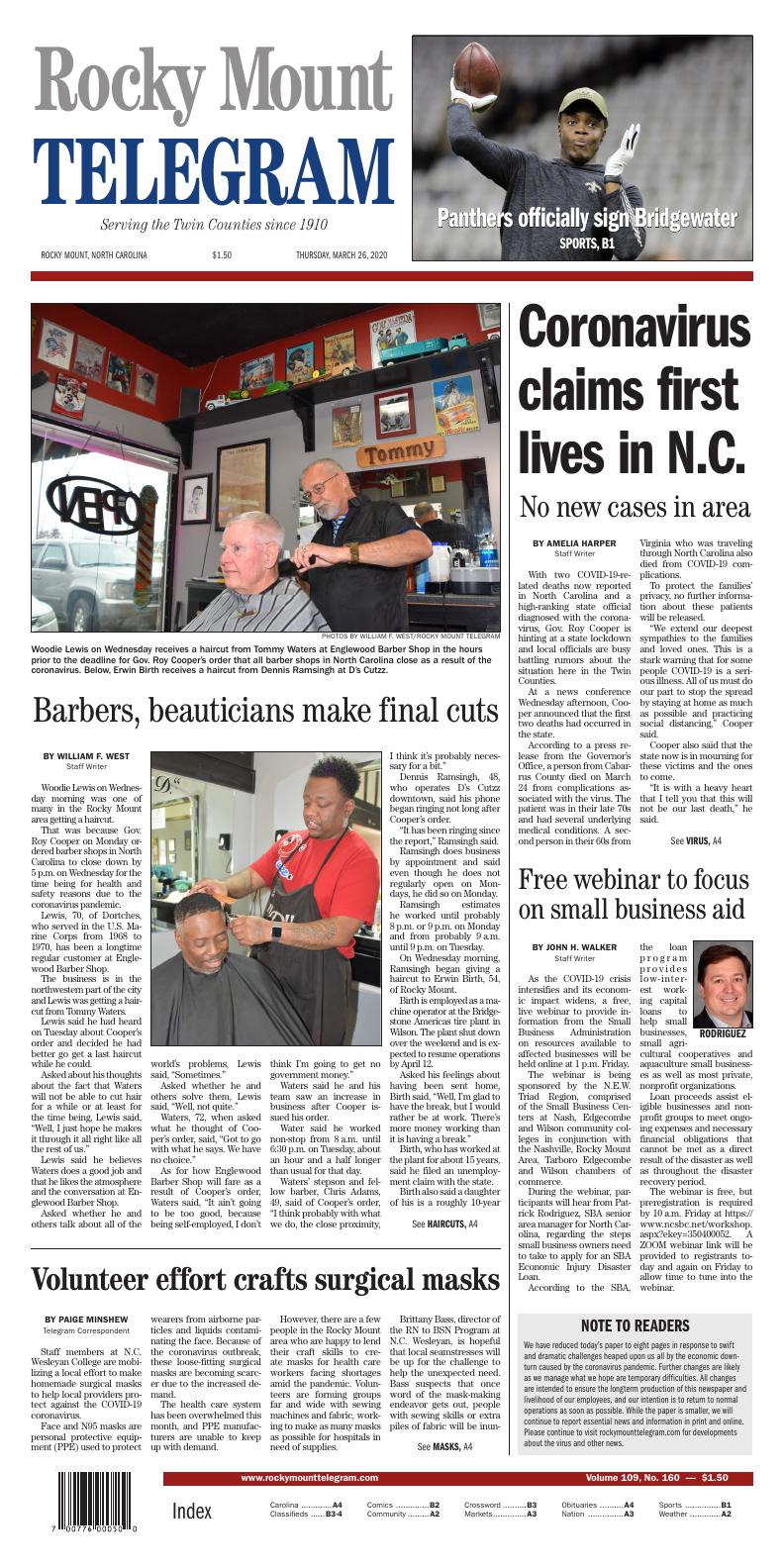 Woodie Lewis on Wednesday morning was one of many in the Rocky Mount area getting a haircut.

That was because Gov. Roy Cooper on Monday ordered barber shops in North Carolina to close down by 5 p.m. on Wednesday for the time being for health and safety reasons due to the coronavirus pandemic.

Lewis, 70, of Dortches, who served in the U.S. Marine Corps from 1968 to 1970, has been a longtime regular customer at Englewood Barber Shop.

The business is in the northwestern part of the city and Lewis was getting a haircut from Tommy Waters.

Lewis said he had heard on Tuesday about Cooper’s order and decided he had better go get a last haircut while he could.

Asked about his thoughts about the fact that Waters will not be able to cut hair for a while or at least for the time being, Lewis said, “Well, I just hope he makes it through it all right like all the rest of us.”

Lewis said he believes Waters does a good job and that he likes the atmosphere and the conversation at Englewood Barber Shop.

Asked whether he and others talk about all of the world’s problems, Lewis said, “Sometimes.”

Asked whether he and others solve them, Lewis said, “Well, not quite.”

Waters, 72, when asked what he thought of Cooper’s order, said, “Got to go with what he says. We have no choice.”

As for how Englewood Barber Shop will fare as a result of Cooper’s order, Waters said, “It ain’t going to be too good, because being self-employed, I don’t think I’m going to get no government money.”

Waters said he and his team saw an increase in business after Cooper issued his order.

Water said he worked non-stop from 8 a.m. until 6:30 p.m. on Tuesday, about an hour and a half longer than usual for that day.

Waters’ stepson and fellow barber, Chris Adams, 49, said of Cooper’s order, “I think probably with what we do, the close proximity, I think it’s probably necessary for a bit.”

“It has been ringing since the report,” Ramsingh said.

Ramsingh does business by appointment and said even though he does not regularly open on Mondays, he did so on Monday.

Ramsingh estimates he worked until probably 8 p.m. or 9 p.m. on Monday and from probably 9 a.m. until 9 p.m. on Tuesday.

Birth is employed as a machine operator at the Bridgestone Americas tire plant in Wilson. The plant shut down over the weekend and is expected to resume operations by April 12.

Asked his feelings about having been sent home, Birth said, “Well, I’m glad to have the break, but I would rather be at work. There’s more money working than it is having a break.”

Birth, who has worked at the plant for about 15 years, said he filed an unemployment claim with the state.

Birth also said a daughter of his is a roughly 10-year employee at the plant and, like him, is a machine operator who was sent home.

One of them, Studio 360 in the northwestern part of the city, was quite busy early Wednesday afternoon.

Catherine Jackson, 36, is one of the stylists at Studio 360.

Jackson said she and her fellow team members were flooded with Facebook and text messages from customers after Cooper issued his order.

“And then it has been even crazier because we have to take longer between everybody,” Jackson said.

Jackson also said, “The shampoo bowls have to be sprayed.”

Jackson also noted the shampoo capes were being washed after every single use.

Overall, Jackson said, “It’s very tedious and it has been tiresome.”

Face and N95 masks are personal protective equipment (PPE) used to protect wearers from airborne particles and liquids contaminating the face. Because of the coronavirus outbreak, these loose-fitting surgical masks are becoming scarcer due to the increased demand.

The health care system has been overwhelmed this month, and PPE manufacturers are unable to keep up with demand.

However, there are a few people in the Rocky Mount area who are happy to lend their craft skills to create masks for health care workers facing shortages amid the pandemic. Volunteers are forming groups far and wide with sewing machines and fabric, working to make as many masks as possible for hospitals in need of supplies.

Brittany Bass, director of the RN to BSN Program at N.C. Wesleyan, is hopeful that local seamstresses will be up for the challenge to help the unexpected need. Bass suspects that once word of the mask-making endeavor gets out, people with sewing skills or extra piles of fabric will be inundating the college to help.

“The surgical mask shortage is very serious, but we are happy that so many people in our community are eager to get involved in ways they might not have thought possible,” Bass said.

While anyone who needs a mask is welcome, front-line medical staff will be given priority.

Bass offered these tips to ensure the masks volunteers make are as safe and effective as possible:

Fabric masks are far from an ideal solution, and their use is not widespread as of yet. Cloth masks are not to be used with patients who are infected with COVID-19, but the masks can be used for other medical concerns. In turn, this will leave appropriate masks available for infected patients.

But with a dwindling supply of N95 masks and a surge in virus cases, health care facilities are preparing for the worst. Many hospitals are asking for donations of fully constructed cloth masks but also are welcoming fabric and elastic to make their own masks.

Joann Fabrics and Craft Stores also are getting in on the cloth mask trend. In addition to taking masks to area hospitals that are dropped off at stores by volunteers, they are opening classrooms to anyone who wants to help customers safely make face masks for donation. Joann Fabrics will provide and donate 100 percent of the supplies needed for these projects for those who come into the stores. The retail outlet will adhere to social distancing guidelines.

The college will be collecting masks at a drive-thru drop-off at the Gateway Technology Center at the front of campus from 3–7 p.m. on Tuesdays and Thursdays and from 9 a.m. to noon on Saturdays.

With two COVID-19-related deaths now reported in North Carolina and a high-ranking state official diagnosed with the coronavirus, Gov. Roy Cooper is hinting at a state lockdown and local officials are busy battling rumors about the situation here in the Twin Counties.

At a news conference Wednesday afternoon, Cooper announced that the first two deaths had occurred in the state.

According to a press release from the Governor’s Office, a person from Cabarrus County died on March 24 from complications associated with the virus. The patient was in their late 70s and had several underlying medical conditions. A second person in their 60s from Virginia who was traveling through North Carolina also died from COVID-19 complications.

To protect the families’ privacy, no further information about these patients will be released.

“We extend our deepest sympathies to the families and loved ones. This is a stark warning that for some people COVID-19 is a serious illness. All of us must do our part to stop the spread by staying at home as much as possible and practicing social distancing,” Cooper said.

Cooper also said that the state now is in mourning for these victims and the ones to come.

“It is with a heavy heart that I tell you that this will not be our last death,” he said.

Cooper also said that homes and businesses should prepare for more restrictions that likely will be introduced later this week, including a possible shelter-in-place order like those already issued by some counties and municipalities across the state.

“We want to be deliberate and do what is right,” Cooper said. “We will be issuing additional orders soon.”

More than 500 people across the state have been diagnosed with COVID-19 and 29 currently are hospitalized. Two of those hospitalized are from Nash County.

No new cases have been reported in Nash County and the current total is four, Nash County Health Director William Hill said at a meeting on Wednesday. This number is accurate despite the fact that state maps published by the state Department of Health and Human Services only are reporting two Nash County cases, he said.

State Treasurer Dale Folwell reported Wednesday that he has tested positive for COVID-19 and now is under quarantine.

“I have quarantined myself and will follow the advice of my physician as to when I will be medically cleared to return to the office. The staff at the Department of State Treasurer has been notified and starting today, only those absolutely necessary for continuing business services will be in our building,” Folwell said.

Folwell said the state’s business should continue as normal.

“My thoughts and prayers are with not only those who are sick, but those who are impacted by the vast financial fallout of this pandemic,” he said. “We will continue to work diligently to make sure retiree checks still go out on time. The State Health Plan provides comprehensive health care coverage and state banking operations continue uninterrupted.”

Meanwhile, the Rocky Mount Telegram and local officials have been kept busy with rumor control.

While neither Hill nor Nash County Deputy Health Director Trey Wright will come right out and comment on specific situations, both treated these reports as rumors without foundation.

“If an employee at any business tests positive for COVID-19, they are quarantined, and we conduct contact tracing to make sure that anyone who could be affected is notified. If we find that the employee has had contact with the public, we will send out a press release notifying the public of possible exposure just as we would with hepatitis or other communicable diseases,” Wright said. “We have not sent out such a notice.”

Wright said Sam’s and other businesses are safe to shop at as long as customers take the normal precautions for COVID-19 including sanitizing carts and keypads before touching them, avoiding contact with surfaces when possible and practicing social distancing measures.

Nash UNC Health Care spokeswoman Dorsey Tobias confirmed Wednesday afternoon that there are no patients in the hospital with COVID-19.

Edgecombe County Health Director Karen Lachapelle reported Wednesday afternoon that no cases of COVID-19 have been reported anywhere in Edgecombe County, including in Tarboro.

Both Brent Fisher of the Nash County EMS and state officials say the National Guard has been called out. However, they have not been tasked with any enforcement duties.

“The National Guard is on active duty for commodity management and distribution of supplies needed during this crisis,” Fisher said. “They are not on enforcement duty, despite rumors.” 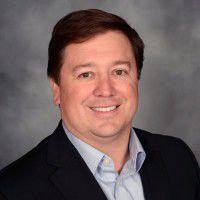 As the COVID-19 crisis intensifies and its economic impact widens, a free, live webinar to provide information from the Small Business Administration on resources available to affected businesses will be held online at 1 p.m. Friday.

During the webinar, participants will hear from Patrick Rodriguez, SBA senior area manager for North Carolina, regarding the steps small business owners need to take to apply for an SBA Economic Injury Disaster Loan.

According to the SBA, the loan program provides low-interest working capital loans to help small businesses, small agricultural cooperatives and aquaculture small businesses as well as most private, nonprofit organizations.

Loan proceeds assist eligible businesses and nonprofit groups to meet ongoing expenses and necessary financial obligations that cannot be met as a direct result of the disaster as well as throughout the disaster recovery period.

The webinar is free, but preregistration is required by 10 a.m. Friday at https://www.ncsbc.net/workshop.aspx?ekey=350400052. A ZOOM webinar link will be provided to registrants today and again on Friday to allow time to tune into the webinar. 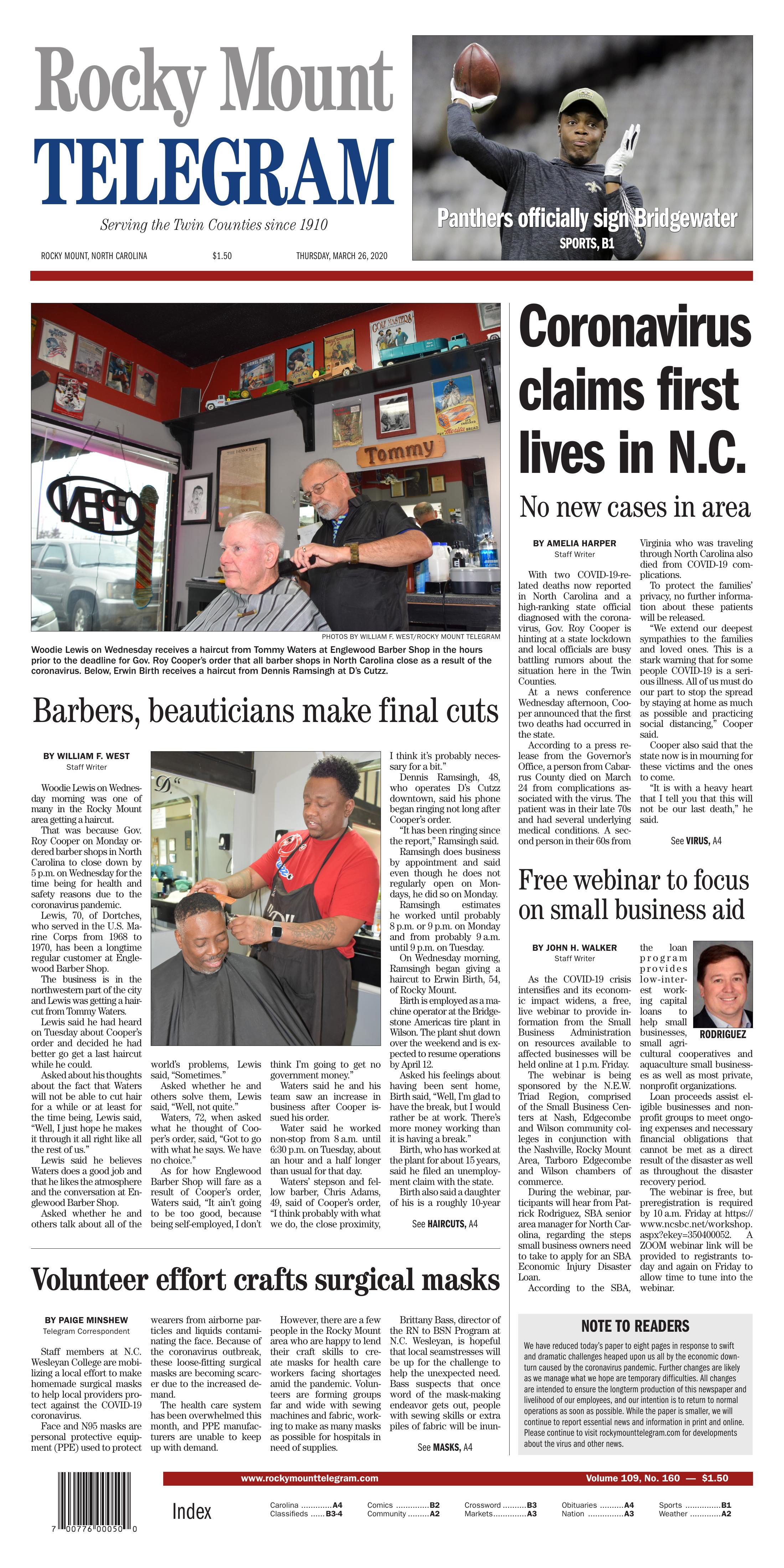