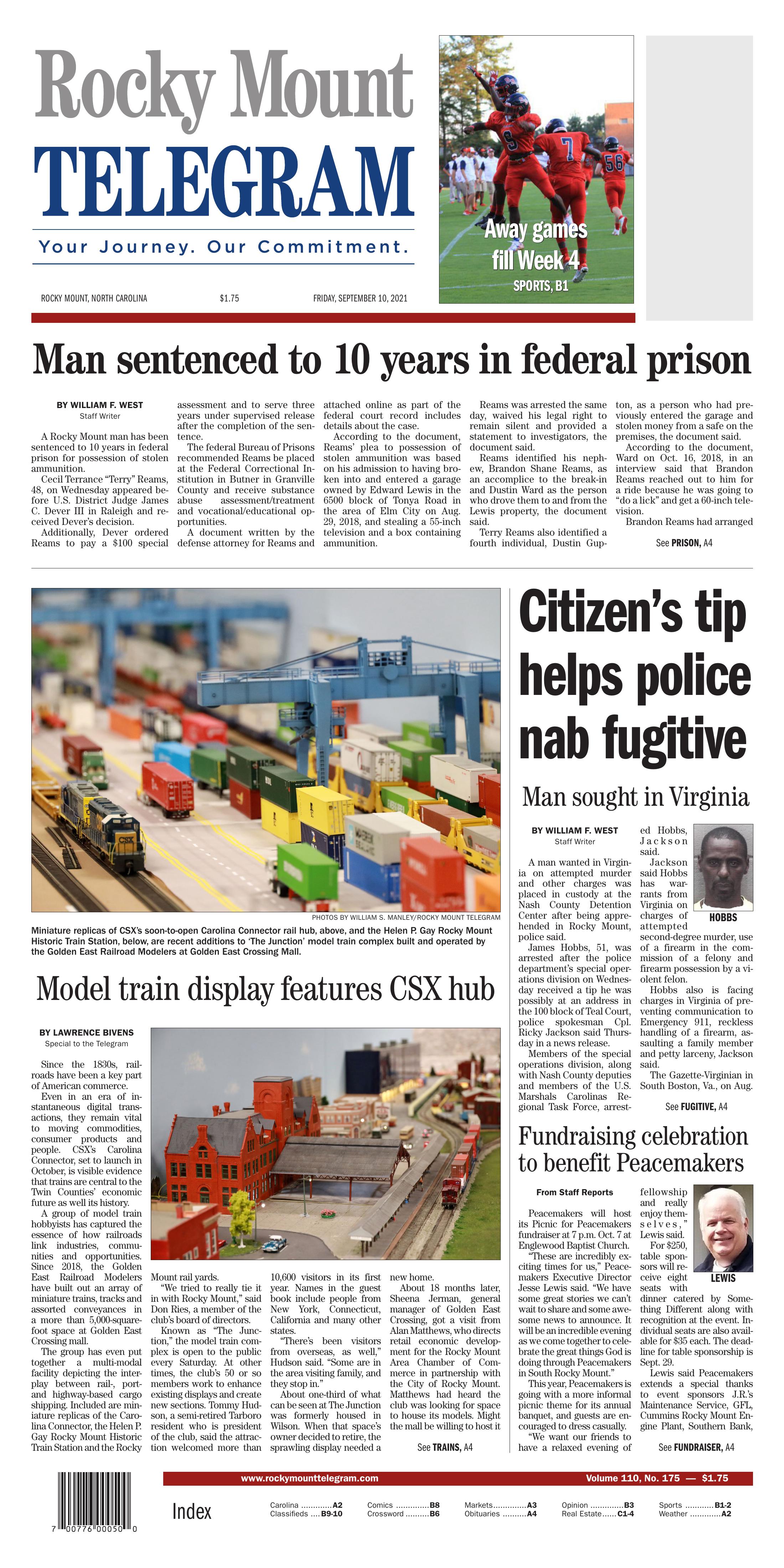 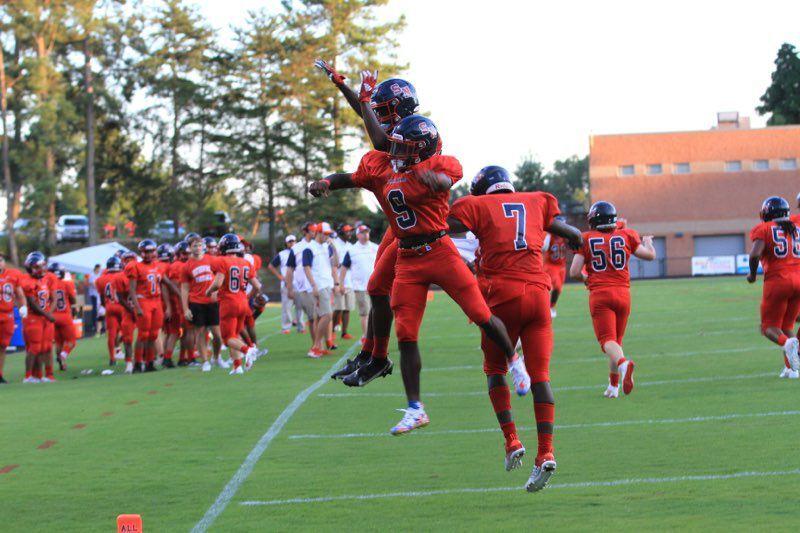 A Rocky Mount man has been sentenced to 10 years in federal prison for possession of stolen ammunition.

Additionally, Dever ordered Reams to pay a $100 special assessment and to serve three years under supervised release after the completion of the sentence.

The federal Bureau of Prisons recommended Reams be placed at the Federal Correctional Institution in Butner in Granville County and receive substance abuse assessment/treatment and vocational/educational opportunities.

A document written by the defense attorney for Reams and attached online as part of the federal court record includes details about the case.

According to the document, Reams’ plea to possession of stolen ammunition was based on his admission to having broken into and entered a garage owned by Edward Lewis in the 6500 block of Tonya Road in the area of Elm City on Aug. 29, 2018, and stealing a 55-inch television and a box containing ammunition.

Reams was arrested the same day, waived his legal right to remain silent and provided a statement to investigators, the document said.

Reams identified his nephew, Brandon Shane Reams, as an accomplice to the break-in and Dustin Ward as the person who drove them to and from the Lewis property, the document said.

Terry Reams also identified a fourth individual, Dustin Gupton, as a person who had previously entered the garage and stolen money from a safe on the premises, the document said.

According to the document, Ward on Oct. 16, 2018, in an interview said that Brandon Reams reached out to him for a ride because he was going to “do a lick” and get a 60-inch television.

Brandon Reams had arranged to sell the television to Terrence “Tank” Rogers for $1,000 and four to five bags of heroin and offered Ward the opioid, the document said.

Ward picked up Brandon Reams and Terry Reams from their home, dropped them off near the garage and waited nearby, the document said.

After 30 to 45 minutes, Brandon Reams messaged Ward and told him to pick them up, the document said.

Ward took them to Tank Rogers’ house and Terry Reams remained outside smoking a cigarette, the document said.

Rogers asked Brandon Reams where the guns were and Brandon Reams said he could not get to them because they were locked in the safe, the document said.

Rogers did not purchase the television because the screen was cracked and the picture was blurry, but he gave Brandon Reams $30 of crack cocaine for the wall mount and they left the television leaning against a tree outside the house, the document said.

According to the document, on Jan. 29, 2019, Calvin “Wise” Grant was interviewed at the Nash County Detention Center in connection with an investigation of a shooting, and a search of his home led to the discovery of a 9mm rifle stolen from Edward Lewis.

Grant told investigators he had purchased the firearm from Dustin Gupton and had owned the firearm for about a month prior to being arrested on Dec. 1, 2018, the document said.

The document said that Brandon Reams brokered the sale of the firearm and that Grant went to the residence where Gupton, Brandon Reams and Terry Reams resided.

At the residence, Gupton traded the rifle for $60 worth of crack cocaine. Brandon Reams carried the rifle out of the house and put the firearm in Grant’s truck, the document said.

The U.S. Attorney’s Office in a news release on Thursday said that at the time of the break-in, Brandon and Terry Reams were both convicted felons on state probation and were required to wear ankle monitors.

Officers reviewed the ankle-monitored movements of both men and found those movements showed they were on the property in the area of Elm City at the time of the break-in, the news release said.

Brandon Reams, 42, on Aug. 4 was sentenced by Dever to five years in federal prison for possession of a firearm by a felon and for aiding and abetting.

Since the 1830s, railroads have been a key part of American commerce.

Even in an era of instantaneous digital transactions, they remain vital to moving commodities, consumer products and people. CSX’s Carolina Connector, set to launch in October, is visible evidence that trains are central to the Twin Counties’ economic future as well its history.

A group of model train hobbyists has captured the essence of how railroads link industries, communities and opportunities. Since 2018, the Golden East Railroad Modelers have built out an array of miniature trains, tracks and assorted conveyances in a more than 5,000-square-foot space at Golden East Crossing mall.

The group has even put together a multi-modal facility depicting the interplay between rail-, port- and highway-based cargo shipping. Included are miniature replicas of the Carolina Connector, the Helen P. Gay Rocky Mount Historic Train Station and the Rocky Mount rail yards.

“We tried to really tie it in with Rocky Mount,” said Don Ries, a member of the club’s board of directors.

Known as “The Junction,” the model train complex is open to the public every Saturday. At other times, the club’s 50 or so members work to enhance existing displays and create new sections. Tommy Hudson, a semi-retired Tarboro resident who is president of the club, said the attraction welcomed more than 10,600 visitors in its first year. Names in the guest book include people from New York, Connecticut, California and many other states.

“There’s been visitors from overseas, as well,” Hudson said. “Some are in the area visiting family, and they stop in.”

About one-third of what can be seen at The Junction was formerly housed in Wilson. When that space’s owner decided to retire, the sprawling display needed a new home.

About 18 months later, Sheena Jerman, general manager of Golden East Crossing, got a visit from Alan Matthews, who directs retail economic development for the Rocky Mount Area Chamber of Commerce in partnership with the City of Rocky Mount. Matthews had heard the club was looking for space to house its models. Might the mall be willing to host it on an in-kind basis?

“Alan came to me personally about accommodating it,” Jerman said. “We had just gotten news about the CSX hub coming, and I could see how developing the model train site could help the community.”

Jerman quickly received an OK from Hendon Properties, which owns the nearly 580,000-square-foot mall. Executives of the Atlanta-based company shared her excitement about moving the club into the mall, later sending a photographer down to snap pictures of the set-up for distribution in the company newsletter.

The partnership has since been a win-win for both parties — as well as for Rocky Mount.

“We’re in constant communication with them about things we can do,” Jerman said. “We’re always looking at ways we can help the community. There will definitely be more to come.”

Notwithstanding its partnership with Hendon Properties, the Golden East Railroad Modelers nonetheless incur expenses of running The Junction. Supplies, including lumber and electronics, are borne mostly by the members. Utilities and insurance on the space run several hundred dollars a month, according to Ries, who serves as the club’s secretary. Proceeds from a donation box at the entry to The Junction help defer those costs, said Ries, a retired computer industry technician living in Littleton.

Ries said the nonprofit association has enjoyed growth in its membership since moving to Rocky Mount. Its members live as far away as Raleigh, Durham and Wake Forest.

“We’re one of the largest model railroader clubs on the East Coast,” he said.

Model rail buffs can spend years building their elaborate displays, and the patience required in their intricate work is increasingly at odds with the instant-gratification ethos of today’s times.

The Tennessee-based National Model Railroad Association reports 18,000 active members across the country. Through the club’s Facebook page and YouTube videos, news about The Junction has spread among the country’s model train enthusiasts, many of whom have ventured to Rocky Mount to check out the club’s displays, which snake around the room on four distinct rail gauges.

“There are also the train guys,” Ries said of his fellow rail hobbyists around the U.S. “It’s not just the general walk-in public that comes to see us.”

A man wanted in Virginia on attempted murder and other charges was placed in custody at the Nash County Detention Center after being apprehended in Rocky Mount, police said.

James Hobbs, 51, was arrested after the police department’s special operations division on Wednesday received a tip he was possibly at an address in the 100 block of Teal Court, police spokesman Cpl. Ricky Jackson said Thursday in a news release.

Jackson said Hobbs has warrants from Virginia on charges of attempted second-degree murder, use of a firearm in the commission of a felony and firearm possession by a violent felon.

Hobbs also is facing charges in Virginia of preventing communication to Emergency 911, reckless handling of a firearm, assaulting a family member and petty larceny, Jackson said.

The Gazette-Virginian in South Boston, Va., on Aug. 27 reported that law enforcement officers from multiple agencies were searching for Hobbs.

The Gazette-Virginian reported that a woman had called the emergency operator to report an assault and that the suspect had fired a gun at her. When law enforcement met with the woman there was evidence of an assault.

South Boston is the largest municipality in Halifax County, Va., which is part of Virginia’s Southside region.

Peacemakers will host its Picnic for Peacemakers fundraiser at 7 p.m. Oct. 7 at Englewood Baptist Church.

“These are incredibly exciting times for us,” Peacemakers Executive Director Jesse Lewis said. “We have some great stories we can’t wait to share and some awesome news to announce. It will be an incredible evening as we come together to celebrate the great things God is doing through Peacemakers in South Rocky Mount.”

This year, Peacemakers is going with a more informal picnic theme for its annual banquet, and guests are encouraged to dress casually.

“We want our friends to have a relaxed evening of fellowship and really enjoy themselves,” Lewis said.

For $250, table sponsors will receive eight seats with dinner catered by Something Different along with recognition at the event. Individual seats are also available for $35 each. The deadline for table sponsorship is Sept. 29.

Peacemakers is a Christian nonprofit organization serving South Rocky Mount with a mission to empower members of the community with the knowledge and skills necessary to lead successful and sustainable lives.