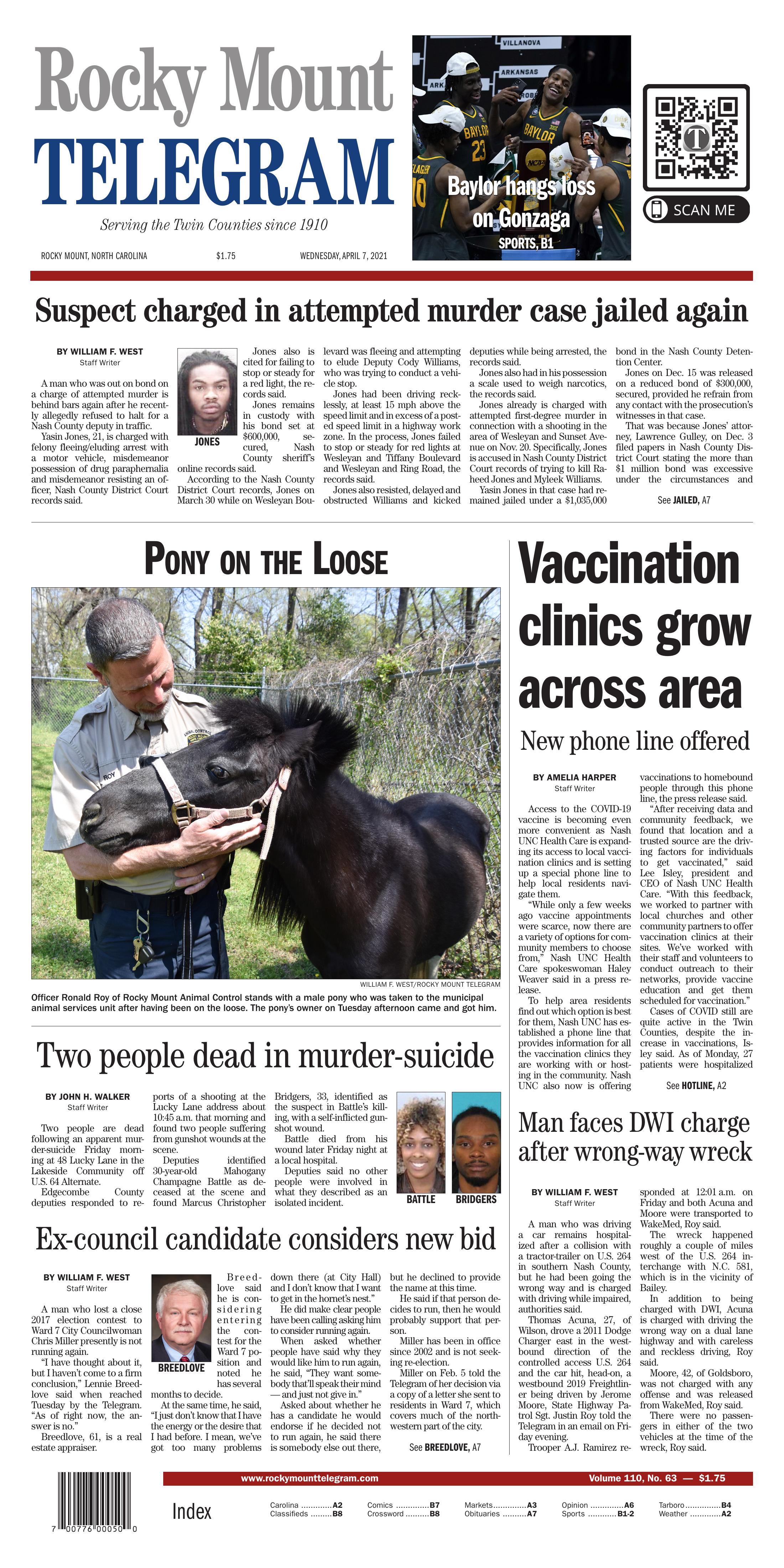 A man who was out on bond on a charge of attempted murder is behind bars again after he recently allegedly refused to halt for a Nash County deputy in traffic.

Jones also is cited for failing to stop or steady for a red light, the records said.

According to the Nash County District Court records, Jones on March 30 while on Wesleyan Boulevard was fleeing and attempting to elude Deputy Cody Williams, who was trying to conduct a vehicle stop.

Jones had been driving recklessly, at least 15 mph above the speed limit and in excess of a posted speed limit in a highway work zone. In the process, Jones failed to stop or steady for red lights at Wesleyan and Tiffany Boulevard and Wesleyan and Ring Road, the records said.

Jones also resisted, delayed and obstructed Williams and kicked deputies while being arrested, the records said.

Jones also had in his possession a scale used to weigh narcotics, the records said.

Jones already is charged with attempted first-degree murder in connection with a shooting in the area of Wesleyan and Sunset Avenue on Nov. 20. Specifically, Jones is accused in Nash County District Court records of trying to kill Raheed Jones and Myleek Williams.

Yasin Jones in that case had remained jailed under a $1,035,000 bond in the Nash County Detention Center.

Jones on Dec. 15 was released on a reduced bond of $300,000, secured, provided he refrain from any contact with the prosecution’s witnesses in that case.

That was because Jones’ attorney, Lawrence Gulley, on Dec. 3 filed papers in Nash County District Court stating the more than $1 million bond was excessive under the circumstances and amounted to a “no bond” in that case.

Gulley in the papers said his client was unable to obtain the funds to meet a large bond and requested a setting of a reasonable bond.

The District Attorney’s Office in the papers consented to Gulley’s request.

The Telegram on Dec. 11 filed a story about Jones after backtracking and obtaining District Court records in Edgecombe and Nash counties showing him accused of assault-related, firearms-related and illegal drug-related crimes and also of motor vehicle-related violations. 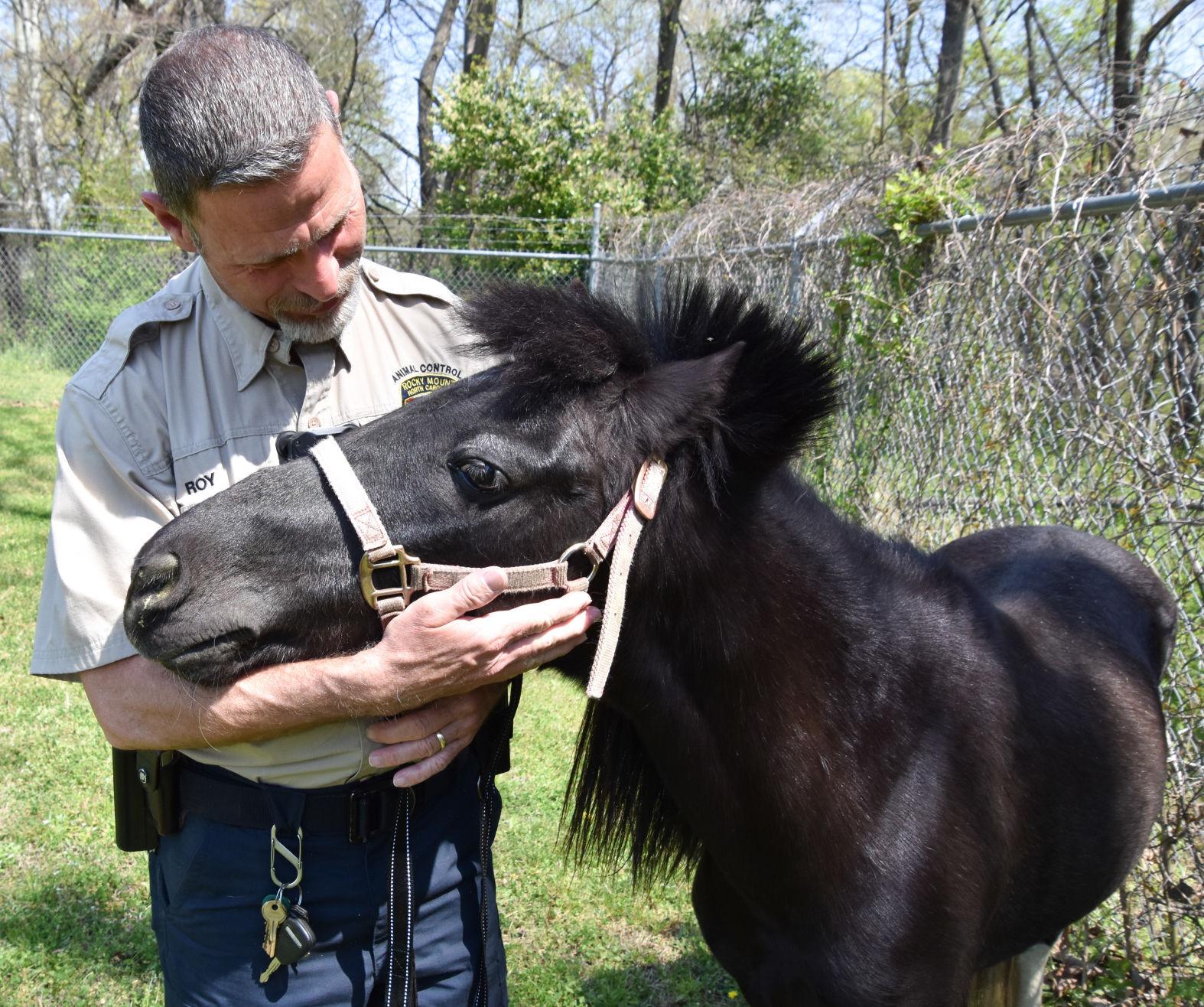 Pony on the Loose

Officer Ronald Roy of Rocky Mount Animal Control stands with a male pony who was taken to the municipal animal services unit after having been on the loose. The pony’s owner on Tuesday afternoon came and got him.

Two people are dead following an apparent murder-suicide Friday morning at 48 Lucky Lane in the Lakeside Community off U.S. 64 Alternate.

Edgecombe County deputies responded to reports of a shooting at the Lucky Lane address about 10:45 a.m. that morning and found two people suffering from gunshot wounds at the scene.

Deputies identified 30-year-old Mahogany Champagne Battle as deceased at the scene and found Marcus Christopher Bridgers, 33, identified as the suspect in Battle’s killing, with a self-inflicted gunshot wound.

Battle died from his wound later Friday night at a local hospital.

Deputies said no other people were involved in what they described as an isolated incident.

A man who lost a close 2017 election contest to Ward 7 City Councilwoman Chris Miller presently is not running again.

“I have thought about it, but I haven’t come to a firm conclusion,” Lennie Breedlove said when reached Tuesday by the Telegram. “As of right now, the answer is no.”

Breedlove, 61, is a real estate appraiser.

Breedlove said he is considering entering the contest for the Ward 7 position and noted he has several months to decide.

He did make clear people have been calling asking him to consider running again.

When asked whether people have said why they would like him to run again, he said, “They want somebody that’ll speak their mind — and just not give in.”

Asked about whether he has a candidate he would endorse if he decided not to run again, he said there is somebody else out there, but he declined to provide the name at this time.

He said if that person decides to run, then he would probably support that person.

Miller has been in office since 2002 and is not seeking re-election.

Miller on Feb. 5 told the Telegram of her decision via a copy of a letter she sent to residents in Ward 7, which covers much of the northwestern part of the city.

So far, two candidates have told the Telegram they are seeking election in Ward 7: Linwood Williams, a former longtime police officer who chairs the Rocky Mount Human Relations Commission; and Jabaris “J. Kelly” Walker, a local businessman who served in combat in Afghanistan.

Councilman W.B. Bullock, who represents Ward 6 and who has been in office since 2002, had told the Telegram he was aiming for some time in early March to inform Ward 6 residents about whether he is going to seek re-election. Bullock could not be reached on Tuesday for an update.

Retired banker Tom Harris has told the Telegram he is seeking election to the Ward 6 position.

The election was supposed to be in October, but Nash County Elections Director John Kearney on Feb. 22 said that due to delays in the release of 2020 U.S. Census data, the election in Rocky Mount likely will be postponed.

Rocky Mount has a council-city manager form of government. The mayor is elected citywide and the seven council members are elected from wards, with all eight elected officials serving staggered four-year terms. City Manager Rochelle Small-Toney was hired in 2017.

Knight has been in office since 2003 and Roberson, Walker and Daughtridge were sworn into office in December 2019.

Access to the COVID-19 vaccine is becoming even more convenient as Nash UNC Health Care is expanding its access to local vaccination clinics and is setting up a special phone line to help local residents navigate them.

“While only a few weeks ago vaccine appointments were scarce, now there are a variety of options for community members to choose from,” Nash UNC Health Care spokeswoman Haley Weaver said in a press release.

To help area residents find out which option is best for them, Nash UNC has established a phone line that provides information for all the vaccination clinics they are working with or hosting in the community. Nash UNC also now is offering vaccinations to homebound people through this phone line, the press release said.

“After receiving data and community feedback, we found that location and a trusted source are the driving factors for individuals to get vaccinated,” said Lee Isley, president and CEO of Nash UNC Health Care. “With this feedback, we worked to partner with local churches and other community partners to offer vaccination clinics at their sites. We’ve worked with their staff and volunteers to conduct outreach to their networks, provide vaccine education and get them scheduled for vaccination.”

Cases of COVID still are quite active in the Twin Counties, despite the increase in vaccinations, Isley said. As of Monday, 27 patients were hospitalized at Nash UNC with COVID complications, the press release said.

Nash County Health Director William Hill said Monday that five of these patients are under intensive care and one of those patients is on a ventilator.

“We saw a brief decrease in COVID patients at Nash UNC Health Care in February, with our inpatient COVID census getting down to the mid-teens for a few weeks,” Isley said. “However, cases requiring hospitalization crept back up in March and have been hanging in the high 20s and low 30s for the past few weeks. We must encourage folks to get vaccinated and to seek early treatment if they test positive for COVID-19.”

Nash UNC’s new Community Vaccination Line number is 252-962-8624. This phone line will provide information about various clinics in the area and will serve as a way for people to schedule their vaccine appointment.

To schedule a vaccination appointment at one of Nash UNC’s community vaccine clinics, which vary from week to week, local residents can call and leave a voicemail with their full name, date of birth and best contact number.

People also should include which clinic they prefer to use. As the clinics change from week to week, anyone who is unsure of the current clinic locations and vaccination opportunities should note this in their message. Anyone who is homebound and unable to travel to a clinic location also should note this information in the message when they call.

Nash UNC Health Care has access to the two-shot Moderna vaccine and the one-shot Johnson & Johnson vaccine, though the amount of each vaccine is limited by the hospital’s weekly allotment, Weaver said. If people prefer one vaccine over another, that information should be noted in the message as well.

A member of the Nash UNC vaccine scheduling team will call people back as soon as possible, often during normal business hours, to discuss vaccination options and schedule appointments at clinics hosted by the hospital.

Anyone who prefers to receive a vaccine in a doctor’s office setting can call 984-215-5485 from 8 a.m. to 5 p.m. on Mondays through Fridays or visit www.yourshot.org to schedule an appointment through Eastern North Carolina Medical Group or another nearby UNC Health primary care provider.

Nash UNC’s Vaccine website — nashunchealthcare.org/vaccine — includes all of this information, as well as information on other community vaccination resources such as Nash County Health Department’s COVID-19 Hotline and registration link, Edgecombe County Health Department’s phone numbers and webpages and links to the state Department of Health and Human Services Vaccine Locator site, which provides vaccination sites by zip code.

“Although the vaccine helps us take a big step towards normal life again, we encourage everyone to continue doing their part to keep communities in the region safe from COVID-19. Please continue to wash your hands, wear a mask and social distance,” Isley said in the press release.

A man who was driving a car remains hospitalized after a collision with a tractor-trailer on U.S. 264 in southern Nash County, but he had been going the wrong way and is charged with driving while impaired, authorities said.

Thomas Acuna, 27, of Wilson, drove a 2011 Dodge Charger east in the westbound direction of the controlled access U.S. 264 and the car hit, head-on, a westbound 2019 Freightliner being driven by Jerome Moore, State Highway Patrol Sgt. Justin Roy told the Telegram in an email on Friday evening.

Trooper A.J. Ramirez responded at 12:01 a.m. on Friday and both Acuna and Moore were transported to WakeMed, Roy said.

The wreck happened roughly a couple of miles west of the U.S. 264 interchange with N.C. 581, which is in the vicinity of Bailey.

In addition to being charged with DWI, Acuna is charged with driving the wrong way on a dual lane highway and with careless and reckless driving, Roy said.

Moore, 42, of Goldsboro, was not charged with any offense and was released from WakeMed, Roy said.

There were no passengers in either of the two vehicles at the time of the wreck, Roy said.