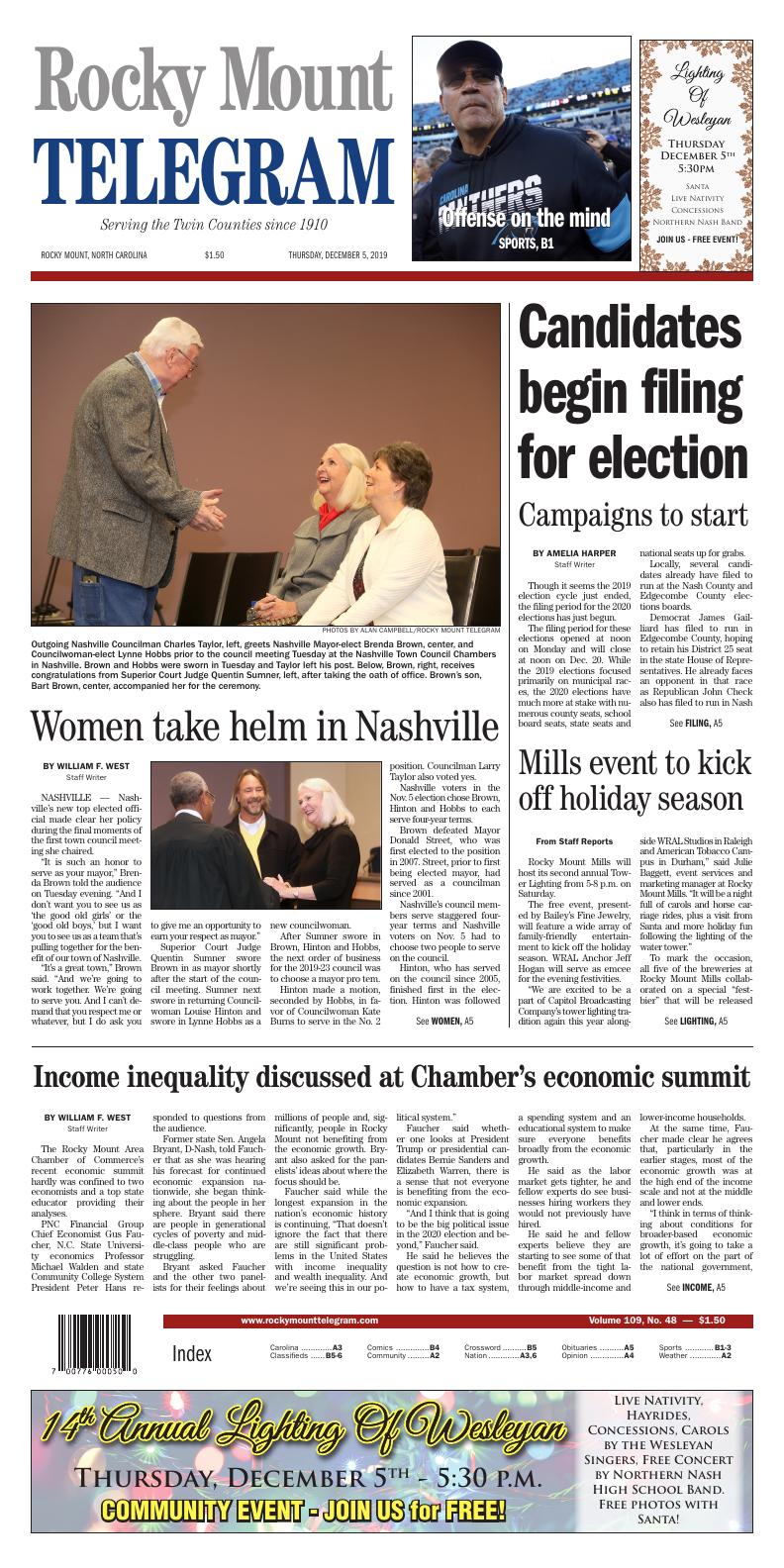 NASHVILLE — Nashville’s new top elected official made clear her policy during the final moments of the first town council meeting she chaired.

“It’s a great town,” Brown said. “And we’re going to work together. We’re going to serve you. And I can’t demand that you respect me or whatever, but I do ask you to give me an opportunity to earn your respect as mayor.”

Superior Court Judge Quentin Sumner swore Brown in as mayor shortly after the start of the council meeting. Sumner next swore in returning Councilwoman Louise Hinton and swore in Lynne Hobbs as a new councilwoman.

After Sumner swore in Brown, Hinton and Hobbs, the next order of business for the 2019-23 council was to choose a mayor pro tem.

Hinton made a motion, seconded by Hobbs, in favor of Councilwoman Kate Burns to serve in the No. 2 position. Councilman Larry Taylor also voted yes.

Nashville voters in the Nov. 5 election chose Brown, Hinton and Hobbs to each serve four-year terms.

Brown defeated Mayor Donald Street, who was first elected to the position in 2007. Street, prior to first being elected mayor, had served as a councilman since 2001.

Nashville’s council members serve staggered four-year terms and Nashville voters on Nov. 5 had to choose two people to serve on the council.

Hinton, who has served on the council since 2005, finished first in the election. Hinton was followed by Hobbs, candidate Dwight Jordan and Councilman Charles Taylor, who was first elected to the council in 2007. Taylor also had been doubling as mayor pro tem.

After Street called Tuesday’s council meeting to order, he and Taylor gave their final remarks as Nashville elected officials before they vacated their seats at the municipal government table.

Taylor expressed appreciation to the municipal government staff, Town Manager Randy Lansing, police Chief Anthony Puckett and the citizens who had elected him to serve a dozen years.

Street said he believes the municipal government has good staffers, good finance officials and good management staff and that he believes the police and fire departments finally are stabilized.

“So I’ll leave very happy that everything is going good,” Street said. “And I don’t know where the town is going to go, but my successor is a very goal-oriented person.”

Street said, “Wherever you’re going to go, you’ve got a golden platform from which to launch.”

The audience, however, did get to hear briefly one more time from Street and Taylor.

That was because Brown presented each of the two with a resolution expressing appreciation for their service.

Street, after receiving a plaque from Lansing, told the audience, “I started this thing as a neophyte.”

With a slight chuckle, he said he did not know there was a salary accompanying his job and noted, “I was planning to do it for nothing.”

Street, with a smile, said, “But it’s still not much of a salary anyway.”

He expressed thanks, wished Brown luck and told Brown and Lansing if he could help them or anybody else, he would do so.

Taylor expressed appreciation to the citizens for supporting the town and added, “I hope you will continue to support it as we go forward.”

Tuesday’s council meeting lasted about an hour and 45 minutes, with Brown and the council dealing extensively with a list of items and hearing from town and state officials.

After the meeting, Brown told the Telegram, “I felt good about tonight, but I have a learning curve. And I know that this was the beginning, but I will get better and better as we go along.”

Hobbs afterward told the Telegram she was happy about being sworn in and added, “It’s just a real honor to be able to serve the good citizens of Nashville.

“I’m looking forward to the future together,” Hobbs said. “I know that we’ll have some challenges, but I think it’s going to be a good opportunity to do some good things here in town.”

Hinton, asked by the Telegram about her priorities for the next four years, summed them up as follows: “Good government, open government, everything up front.”

Brown will be paid $6,000 a year as mayor and the council members will each be paid $4,800 a year. Each of the five officials also will be allocated $1,000 a year for travel-related expenses.

Former state Sen. Angela Bryant, D-Nash, told Faucher that as she was hearing his forecast for continued economic expansion nationwide, she began thinking about the people in her sphere. Bryant said there are people in generational cycles of poverty and middle-class people who are struggling.

Bryant asked Faucher and the other two panelists for their feelings about millions of people and, significantly, people in Rocky Mount not benefiting from the economic growth. Bryant also asked for the panelists’ ideas about where the focus should be.

Faucher said while the longest expansion in the nation’s economic history is continuing, “That doesn’t ignore the fact that there are still significant problems in the United States with income inequality and wealth inequality. And we’re seeing this in our political system.”

Faucher said whether one looks at President Trump or presidential candidates Bernie Sanders and Elizabeth Warren, there is a sense that not everyone is benefiting from the economic expansion.

“And I think that is going to be the big political issue in the 2020 election and beyond,” Faucher said.

He said he believes the question is not how to create economic growth, but how to have a tax system, a spending system and an educational system to make sure everyone benefits broadly from the economic growth.

He said as the labor market gets tighter, he and fellow experts do see businesses hiring workers they would not previously have hired.

He said he and fellow experts believe they are starting to see some of that benefit from the tight labor market spread down through middle-income and lower-income households.

At the same time, Faucher made clear he agrees that, particularly in the earlier stages, most of the economic growth was at the high end of the income scale and not at the middle and lower ends.

“I think in terms of thinking about conditions for broader-based economic growth, it’s going to take a lot of effort on the part of the national government, the state government, the local governments to make sure that all potential workers are trained,” he said.

Faucher emphasized he is concerned about large pockets of workers and potential workers who have not seen the benefits of the economic expansion.

He emphasized he is concerned about societal tensions stemming from people feeling some are getting ahead of others.

“And that’s leading to a lot of the political angst in our system,” he said. “And I really think that, for our own sanity as a nation, we need to address that and figure out how we can have broad-based economic growth.”

Walden has a book coming out titled “Real Solutions: Commonsense Ideas for Solving Our Most Pressing Problems.”

Specifically, Walden said he is calling for a surge in spending, primarily funded by the federal government, of $500 billion a year.

Walden said he proposes the money be spent to reduce class sizes by one-third, to increase teacher pay by one-third and on after pre-school and after-school programs.

He also noted he once served then-Gov. Jim Hunt on a welfare reform task force. He said he and fellow members discovered, in many programs, when a welfare recipient reaches a certain income level, he or she stops receiving government payments.

He said what he believes needs to be done for many of the safety net programs is to provide support on a sliding scale.

He said he believes when a welfare recipient earns an additional dollar of income, he or she should receive a reduction of maybe anywhere from 40-50 cents in government support, instead of a whole dollar of support.

Hans said he believes a person’s education will become shorter in duration and occur more regularly throughout his or her life.

The summit was held on Tuesday morning at Benvenue Country Club and lasted for nearly two hours.

Though it seems the 2019 election cycle just ended, the filing period for the 2020 elections has just begun.

The filing period for these elections opened at noon on Monday and will close at noon on Dec. 20. While the 2019 elections focused primarily on municipal races, the 2020 elections have much more at stake with numerous county seats, school board seats, state seats and national seats up for grabs.

Several seats on the Nash County Board of Commissioners are up for election this year. Democrat Lou Richardson in District 1, Republican Dan Cone in District 3 and Republican Sue Leggett in District 4 all face elections this year. So far, Cone has filed for re-election and Leggett has filed to run for her seat for the first time as she was appointed to the position in January.

Incumbent Democrat Anne Melvin also already has filed to run to retain her position as the Nash County Register of Deeds.

Six Nash-Rocky Mount school board seats are destined for the polls in 2020. The terms of Doneva Chavis in District 1, Franklin Lamm in District 3, Bill Sharpe in District 5, Ricky Jenkins in District 5, Evelyn Bulluck in District 10 and Ann Edge in District 11 all end next year. So far, none of these candidates have filed for re-election and no other challengers have come forward.

In Edgecombe County, Democrat Shelly Willingham has filed with the Board of Elections to retain his District 23 seat in the state House of Representatives. So far, he faces no opposition in this race.

The Edgecombe County Register of Deeds position also is up for grabs in 2020. Democrat Vila Reed Anderson of Tarboro has filed to run for the position.

Three seats on the Edgecombe County Board of Education also are in play in 2020. Democrat Lillie Worsley of District 2, Democrat William Ellis of District 4 and Democrat Raymond L. Privott of District 6 will all need to file for election this year in order to run for the opportunity to retain their seats. So far, Worsley and Ellis have filed to run and face no opposition thus far.

The free event, presented by Bailey’s Fine Jewelry, will feature a wide array of family-friendly entertainment to kick off the holiday season. WRAL Anchor Jeff Hogan will serve as emcee for the evening festivities.

“We are excited to be a part of Capitol Broadcasting Company’s tower lighting tradition again this year alongside WRAL Studios in Raleigh and American Tobacco Campus in Durham,” said Julie Baggett, event services and marketing manager at Rocky Mount Mills. “It will be a night full of carols and horse carriage rides, plus a visit from Santa and more holiday fun following the lighting of the water tower.”

To mark the occasion, all five of the breweries at Rocky Mount Mills collaborated on a special “festbier” that will be released and served as part of the evening festivities. “Tower Lighting Lager” is an amber beer brewed in the German “Festbier-Maerzen” tradition that is designed to please a crowd.

The event will include horse and carriage rides around the Mills campus, pictures with Santa in the main mill building and music by Stray Local from 6:45-8 p.m. in the Beer Garden. 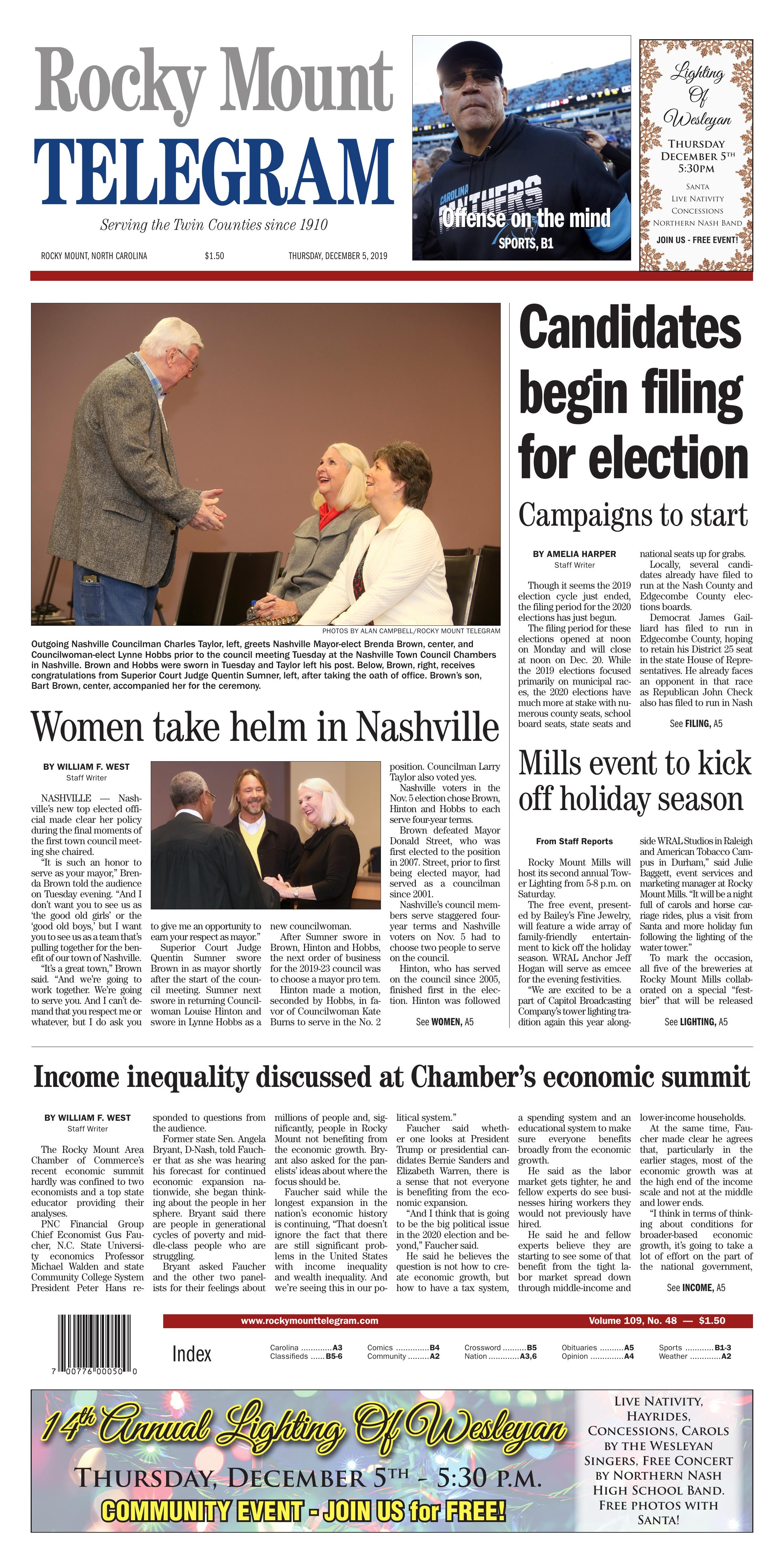