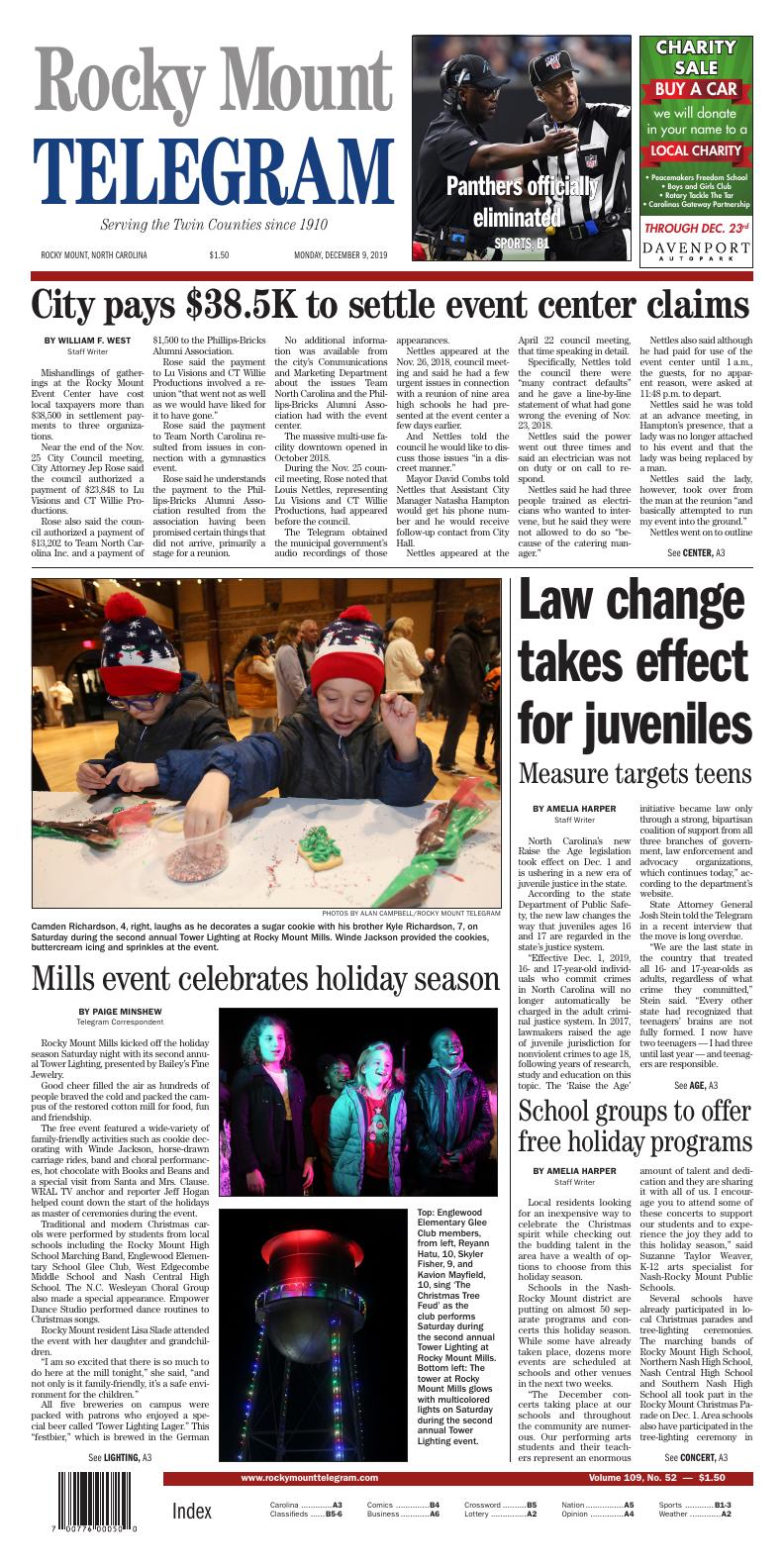 Mishandlings of gatherings at the Rocky Mount Event Center have cost local taxpayers more than $38,500 in settlement payments to three organizations.

Near the end of the Nov. 25 City Council meeting, City Attorney Jep Rose said the council authorized a payment of $23,848 to Lu Visions and CT Willie Productions.

Rose said the payment to Lu Visions and CT Willie Productions involved a reunion “that went not as well as we would have liked for it to have gone.”

Rose said the payment to Team North Carolina resulted from issues in connection with a gymnastics event.

Rose said he understands the payment to the Phillips-Bricks Alumni Association resulted from the association having been promised certain things that did not arrive, primarily a stage for a reunion.

No additional information was available from the city’s Communications and Marketing Department about the issues Team North Carolina and the Phillips-Bricks Alumni Association had with the event center.

During the Nov. 25 council meeting, Rose noted that Louis Nettles, representing Lu Visions and CT Willie Productions, had appeared before the council.

The Telegram obtained the municipal government’s audio recordings of those appearances.

Nettles appeared at the Nov. 26, 2018, council meeting and said he had a few urgent issues in connection with a reunion of nine area high schools he had presented at the event center a few days earlier.

And Nettles told the council he would like to discuss those issues “in a discreet manner.”

Mayor David Combs told Nettles that Assistant City Manager Natasha Hampton would get his phone number and he would receive follow-up contact from City Hall.

Nettles appeared at the April 22 council meeting, that time speaking in detail.

Specifically, Nettles told the council there were “many contract defaults” and he gave a line-by-line statement of what had gone wrong the evening of Nov. 23, 2018.

Nettles said the power went out three times and said an electrician was not on duty or on call to respond.

Nettles said he had three people trained as electricians who wanted to intervene, but he said they were not allowed to do so “because of the catering manager.”

Nettles also said although he had paid for use of the event center until 1 a.m., the guests, for no apparent reason, were asked at 11:48 p.m. to depart.

Nettles said he was told at an advance meeting, in Hampton’s presence, that a lady was no longer attached to his event and that the lady was being replaced by a man.

Nettles said the lady, however, took over from the man at the reunion “and basically attempted to run my event into the ground.”

Nettles went on to outline more grievances, including having been told he would have use of a venue to accommodate 3,000 people yet there were only 90 tables and 60 tablecloths.

Hampton, in an extensive response, told the council the city staff made clear to Nettles an intent to reimburse him, pending proof of payments for all reported expenses.

Hampton said Nettles provided proof of payments totaling $15,398 and said city staff attempts to contact him about the unreconciled amount had been unsuccessful.

Councilman Reuben Blackwell, noting Nettles’ presence in the council chamber and the length of time since the reunion, asked, “Can we please resolve this so that we can move forward?”

Councilwoman Chris Miller wanted to know whether the city or Florida-based Sports Facilities Management, which oversees the event center, was responsible for reimbursing any legitimate costs.

Small-Toney also said the city’s intent was to return to the council for authorization should the city have to step in and make the payment.

And Small-Toney made clear she and city staff are willing to sit down with Nettles afterward to try to reconcile any receipts he had that the city did not have.

During the April 22 council meeting, Councilman Andre Knight, who was at the reunion and is a classmate of Nettles, apologized to Nettles.

And Knight noted he had encouraged city staff to make sure Nettles was fully reimbursed.

Additionally, Knight apologized to the organizer of what was going to be the “Grown and Sexy” event at the event center.

Knight told of the organizer of the “Grown and Sexy” event having followed proper advance procedure, only to be notified the event should be canceled because of local residents who had problems with that event’s name.

“I have a strong, strong bitter taste in my mouth that we let a few citizens dictate what is going to take place at this event center,” Knight said. “I just want to say to the city manager that this needs to be resolved. You have the power — and we have the power — to make it right.”

Knight said if there are policies at the event center and applicants follow them, then they should be treated fairly and justly across the board.

And he added, “We need to have a strong talk with those that are managing the event center. And if they can’t manage it, we need to get rid of ‘em.”

Camden Richardson, 4, right, laughs as he decorates a sugar cookie with his brother Kyle Richardson, 7, on Saturday during the second annual Tower Lighting at Rocky Mount Mills. Winde Jackson provided the cookies, buttercream icing and sprinkles at the event.

The tower at Rocky Mount Mills glows with multicolored lights on Saturday during the second annual Tower Lighting event.

Good cheer filled the air as hundreds of people braved the cold and packed the campus of the restored cotton mill for food, fun and friendship.

The free event featured a wide-variety of family-friendly activities such as cookie decorating with Winde Jackson, horse-drawn carriage rides, band and choral performances, hot chocolate with Books and Beans and a special visit from Santa and Mrs. Clause. WRAL TV anchor and reporter Jeff Hogan helped count down the start of the holidays as master of ceremonies during the event.

Rocky Mount resident Lisa Slade attended the event with her daughter and grandchildren.

“I am so excited that there is so much to do here at the mill tonight,” she said, “and not only is it family-friendly, it’s a safe environment for the children.”

All five breweries on campus were packed with patrons who enjoyed a special beer called ‘Tower Lighting Lager.” This “festbier,” which is brewed in the German “Fiestbier-Maerzen” tradition, made its debut at the event and is the product of a collaboration by all of the Rocky Mount Mills breweries.

Debbie and Jerry Brewer made the trek all the way from Stantonsburg to experience the fun evening. Debbie said of her first time at the mill, “I cannot believe how beautiful this campus is. It’s lively and busy and it really gets me excited for Christmas.”

North Carolina’s new Raise the Age legislation took effect on Dec. 1 and is ushering in a new era of juvenile justice in the state.

According to the state Department of Public Safety, the new law changes the way that juveniles ages 16 and 17 are regarded in the state’s justice system.

“Effective Dec. 1, 2019, 16- and 17-year-old individuals who commit crimes in North Carolina will no longer automatically be charged in the adult criminal justice system. In 2017, lawmakers raised the age of juvenile jurisdiction for nonviolent crimes to age 18, following years of research, study and education on this topic. The ‘Raise the Age’ initiative became law only through a strong, bipartisan coalition of support from all three branches of government, law enforcement and advocacy organizations, which continues today,” according to the department’s website.

State Attorney General Josh Stein told the Telegram in a recent interview that the move is long overdue.

“We are the last state in the country that treated all 16- and 17-year-olds as adults, regardless of what crime they committed,” Stein said. “Every other state had recognized that teenagers’ brains are not fully formed. I now have two teenagers — I had three until last year — and teenagers are responsible.

“They need to be held accountable — but you also have to recognize they’re still immature and their brains are not fully formed.”

“That is why we need to have a juvenile justice system where they can be held accountable for whatever act they did, but which also recognizes that they have a long time left in their lives. We need to try to rehabilitate those young people so that they actually can be productive members of our communities,” Stein said.

“As this law was crafted, I supported the position of the N.C. Conference of District Attorneys. We wanted to make sure the law was still tough on criminal offenses. As such, the law does not cover juveniles indicted for class A through F felonies. Our policy is that these juveniles ages 16 and 17 who are charged with these crimes will automatically be transferred to adult court,” Evans said.

However, Evans said he supports the intent of the law, which is to benefit juvenile offenders convicted of many non-violent crimes and allow them a second chance to succeed in life.

“Since we were the last state in the nation to adopt such a law, our children were at a complete disadvantage where they were applying to college or trying to get a job. If a 16- or 17-year-old in another state stole a sweater from a store, that crime would not be recorded. But it would follow them if they were from North Carolina,” Evans said.

The law is complex and includes new provisions for how to deal with juvenile offenders. According to the new law, 16- and 17-year-old juveniles charged with violent crimes and certain felonies are automatically transferred to adult court “upon notice of an indictment or a finding of probable cause after notice and a hearing.”

Gang activity and ties, which are now explored by juvenile court counselors at intake, can also affect where the case is tried. And though most motor vehicle offenses will be tried in juvenile court, driving under the influence still counts as an adult crime for teens in this age range.

The new law also impacts the length of time juvenile offenders spend in a juvenile detention center, allows law enforcement officers to have easier access to records in certain situations, provides more training and resources of officers regarding juvenile justice and authorizes the creation of school-justice partnerships to reduce in-school arrests and out-of-school suspensions.

For more information about the new Raise the Age Law, go to https://www.ncdps.gov/our-organization/juvenile-justice/key-initiatives/raise-age-nc .

Local residents looking for an inexpensive way to celebrate the Christmas spirit while checking out the budding talent in the area have a wealth of options to choose from this holiday season.

Schools in the Nash-Rocky Mount district are putting on almost 50 separate programs and concerts this holiday season. While some have already taken place, dozens more events are scheduled at schools and other venues in the next two weeks.

“The December concerts taking place at our schools and throughout the community are numerous. Our performing arts students and their teachers represent an enormous amount of talent and dedication and they are sharing it with all of us. I encourage you to attend some of these concerts to support our students and to experience the joy they add to this holiday season,” said Suzanne Taylor Weaver, K-12 arts specialist for Nash-Rocky Mount Public Schools.

Tonight, Cedar Grove Elementary School will be holding a “Christmas at the Grove” concert at 6 p.m. in their multipurpose room. Nash Central High School will also host a Christmas concert at 6:30 p.m. in their gymnasium. That concert will feature the chorus, Show Choir, Joy Choir, strings and a preschoolers concert.

While many local school concerts will be held on their school campus, some groups are branching out to other locations. The Englewood Elementary Glee Club will perform at 6 p.m. Tuesday at the CresCom Bank on Sunset Avenue and at 1:30 p.m. on Saturday at the Farmer’s Market in Rocky Mount.

For a complete list of all Nash-Rocky Mount Public Schools Holiday Concerts, go to https://bit.ly/2LzL7Db . 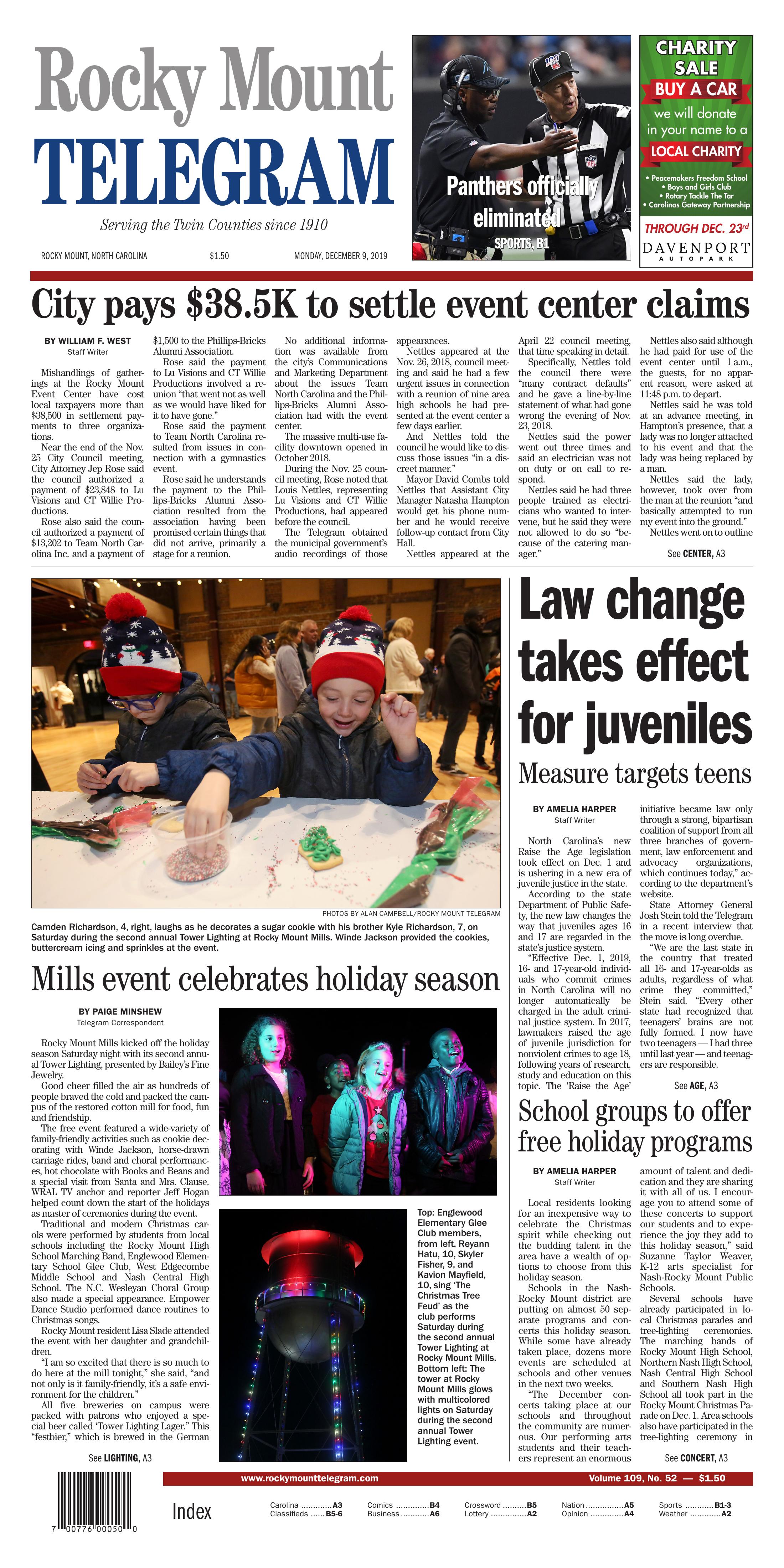