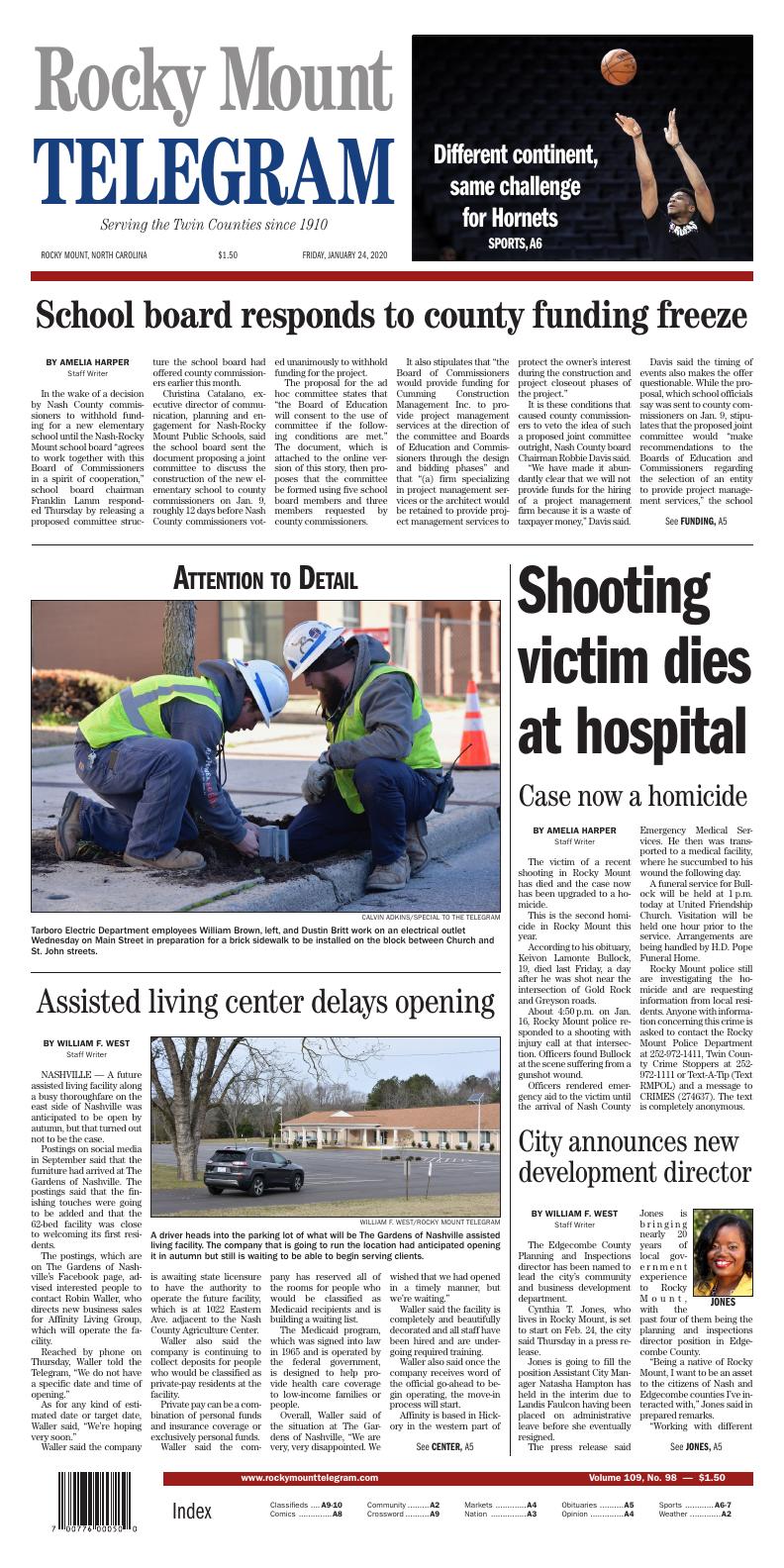 Milwaukee Bucks’ Giannis Antetokounmpo shoots during a training session Thursday ahead of the NBA basketball game against the Charlotte Hornets in Paris.

Christina Catalano, executive director of communication, planning and engagement for Nash-Rocky Mount Public Schools, said the school board sent the document proposing a joint committee to discuss the construction of the new elementary school to county commissioners on Jan. 9, roughly 12 days before Nash County commissioners voted unanimously to withhold funding for the project.

The proposal for the ad hoc committee states that “the Board of Education will consent to the use of committee if the following conditions are met.” The document, which is attached to the online version of this story, then proposes that the committee be formed using five school board members and three members requested by county commissioners.

It is these conditions that caused county commissioners to veto the idea of such a proposed joint committee outright, Nash County board Chairman Robbie Davis said.

“We have made it abundantly clear that we will not provide funds for the hiring of a project management firm because it is a waste of taxpayer money,” Davis said.

Lamm said the school board had to make that decision quickly.

“We had to have that item in our budget before we reconciled the budget for the year. If we had waited, it would have been July before we could have added the item to the budget. We needed to move on that,” Lamm said.

“We did not want to hire a local firm to help with the site selection process because of the potential for bias or perceived bias in making that decision,” Lamm said.

“I am not sure how the school board can make plans to build a new school when they don’t have any money to build it,” he said.

Nash County Manager Zee Lamb said such conflicts between county commissioners and school boards are not uncommon in North Carolina because state laws empower school districts to make decisions about the building of schools but does not give them the taxing authority to generate funds to pay for them. Instead, school districts must get the money from county commissioners, who are obligated to act as guardians of the tax money collected from the public. The effort to build a school requires cooperation between those two boards, he said.

“North Carolina has always funded schools this way, but our state is in the minority with this funding structure,” Lamb said. “In most states, school boards operate independently and have the responsibility to raise the funds from taxes themselves rather than just demanding it from the county. The funding structure we have essentially encourages conflict between the boards and most school districts in the state find themselves in conflict with their county commissioners at times.”

Davis said he is not sure what the future holds.

“We will just have to keep encouraging the school board to cooperate with us,” Davis said.

Lamm said the school board is willing to cooperate. What bothers Lamm most, he said, is that county commissioners did not discuss the issues they had with the proposed ad hoc committee structure. Instead, they just voted to withhold the school funding.

Lamm said there is some wiggle room on the formation of a joint committee. The school board would have been foolish not to request reimbursement for the hiring of the project management firm for the initial phases of the project. But they are more flexible about the future phases.

In the past, Lamm said he has seen boards cut aspects of school construction that affected later maintenance of the school and cost more for taxpayers in the long run. That is foolish economy, he said.

“No one wants to protect taxpayer dollars more than I do,” he said. “But we need to build this school correctly from the start.”

Both county commissioners and school board members seem to want the same result: a well-crafted school that will meet the needs of children without wasting taxpayer money. Lamm said he is hopeful that the two groups will come to a better understanding after Tuesday’s school construction committee meeting to which county commissioners are invited, he said.

“The main thing is the children. We can’t let petty differences affect them,” Lamm said. 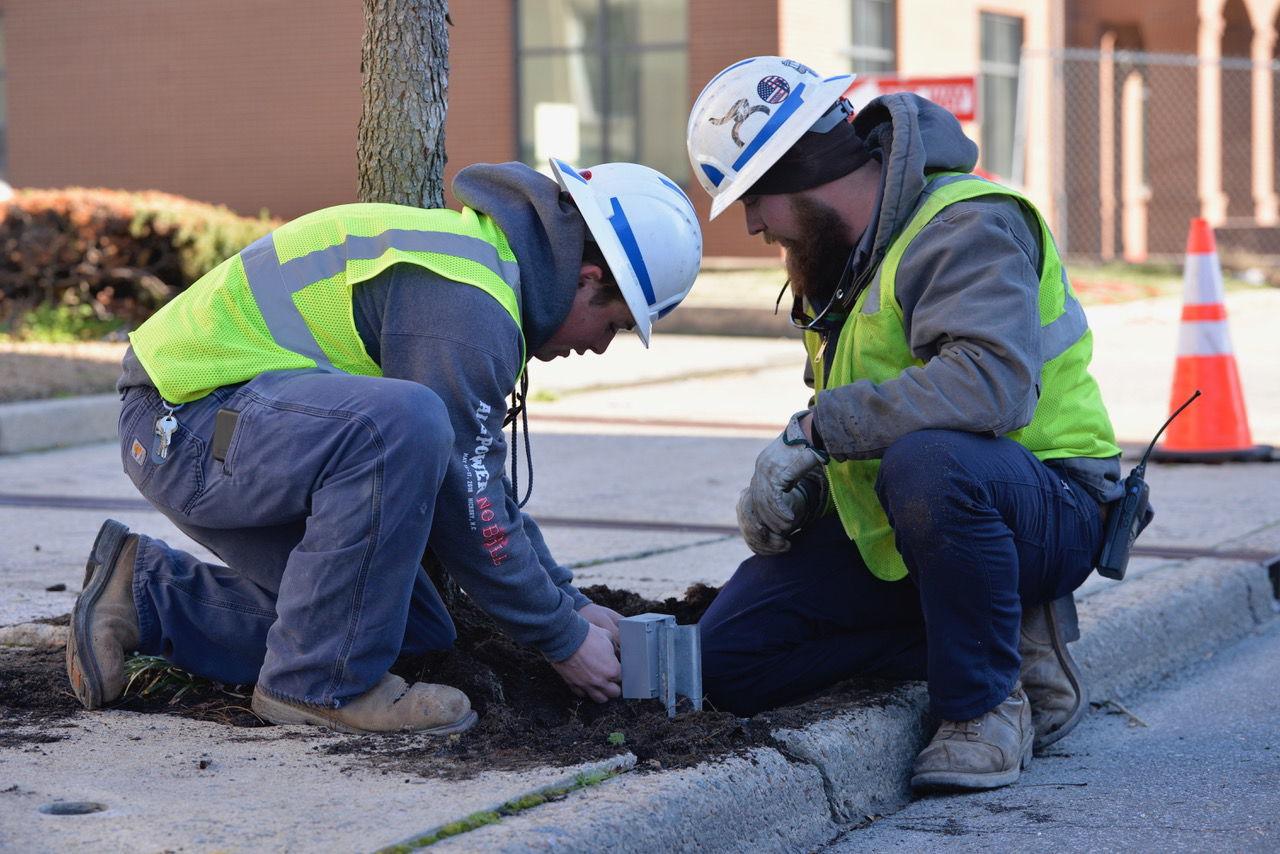 Tarboro Electric Department employees William Brown, left, and Dustin Britt work on an electrical outlet Wednesday on Main Street in preparation for a brick sidewalk to be installed on the block between Church and St. John streets.

A driver heads into the parking lot of what will be The Gardens of Nashville assisted living facility. The company that is going to run the location had anticipated opening it in autumn but still is waiting to be able to begin serving clients.

Signs outside The Gardens of Nashville assisting facility say the location is going to be opening soon but the company is having to wait for licensure.

NASHVILLE — A future assisted living facility along a busy thoroughfare on the east side of Nashville was anticipated to be open by autumn, but that turned out not to be the case.

Postings on social media in September said that the furniture had arrived at The Gardens of Nashville. The postings said that the finishing touches were going to be added and that the 62-bed facility was close to welcoming its first residents.

The postings, which are on The Gardens of Nashville’s Facebook page, advised interested people to contact Robin Waller, who directs new business sales for Affinity Living Group, which will operate the facility.

Reached by phone on Thursday, Waller told the Telegram, “We do not have a specific date and time of opening.”

As for any kind of estimated date or target date, Waller said, “We’re hoping very soon.”

Waller said the company is awaiting state licensure to have the authority to operate the future facility, which is at 1022 Eastern Ave. adjacent to the Nash County Agriculture Center.

Waller also said the company is continuing to collect deposits for people who would be classified as private-pay residents at the facility.

Waller said the company has reserved all of the rooms for people who would be classified as Medicaid recipients and is building a waiting list.

The Medicaid program, which was signed into law in 1965 and is operated by the federal government, is designed to help provide health care coverage to low-income families or people.

Overall, Waller said of the situation at The Gardens of Nashville, “We are very, very disappointed. We wished that we had opened in a timely manner, but we’re waiting.”

Waller said the facility is completely and beautifully decorated and all staff have been hired and are undergoing required training.

Waller also said once the company receives word of the official go-ahead to begin operating, the move-in process will start.

Affinity is based in Hickory in the western part of the state.

The state Department of Health and Human Services has said the property along Eastern Avenue was licensed as an adult care home in July 2015 and owned by Universal Health Care.

Universal in July 2016 issued discharge notices to all residents, with all residents discharged the next month so the company could make mechanical repairs. Affinity in April 2018 purchased the facility from Universal.

Affinity already has a presence in the area, with Somerset Court of Rocky Mount in the 900 block of Westwood Drive and Wilson House in the 1800 block of Martin Luther King Parkway Southeast in Wilson.

The victim of a recent shooting in Rocky Mount has died and the case now has been upgraded to a homicide.

This is the second homicide in Rocky Mount this year.

According to his obituary, Keivon Lamonte Bullock, 19, died last Friday, a day after he was shot near the intersection of Gold Rock and Greyson roads.

About 4:50 p.m. on Jan. 16, Rocky Mount police responded to a shooting with injury call at that intersection. Officers found Bullock at the scene suffering from a gunshot wound.

Officers rendered emergency aid to the victim until the arrival of Nash County Emergency Medical Services. He then was transported to a medical facility, where he succumbed to his wound the following day.

A funeral service for Bullock will be held at 1 p.m. today at United Friendship Church. Visitation will be held one hour prior to the service. Arrangements are being handled by H.D. Pope Funeral Home.

Rocky Mount police still are investigating the homicide and are requesting information from local residents. Anyone with information concerning this crime is asked to contact the Rocky Mount Police Department at 252-972-1411, Twin County Crime Stoppers at 252-972-1111 or Text-A-Tip (Text RMPOL) and a message to CRIMES (274637). The text is completely anonymous.

The Edgecombe County Planning and Inspections director has been named to lead the city’s community and business development department.

Cynthia T. Jones, who lives in Rocky Mount, is set to start on Feb. 24, the city said Thursday in a press release.

Jones is going to fill the position Assistant City Manager Natasha Hampton has held in the interim due to Landis Faulcon having been placed on administrative leave before she eventually resigned.

The press release said Jones is bringing nearly 20 years of local government experience to Rocky Mount, with the past four of them being the planning and inspections director position in Edgecombe County.

“Being a native of Rocky Mount, I want to be an asset to the citizens of Nash and Edgecombe counties I’ve interacted with,” Jones said in prepared remarks.

“Working with different partners has afforded me the opportunity to engage with the citizens of our area,” Jones said. “It’s exciting to see all the projects going on in Rocky Mount.”

Generally, UDOs place all of a jurisdiction’s development regulations into one document so all of the regulations work together and property owners and other users can quickly find the information they need.

The press release also said Jones’ background includes having a decade of experience in the Durham City-County Planning Department, where she served as a planner/certified zoning enforcement officer.

Jones also holds a bachelor’s degree in urban and regional planning from East Carolina University and a master’s degree in public administration from N.C. Central University.

City Manager Rochelle Small-Toney, in prepared remarks, said she and her team are elated about the skills and experience Jones brings to the organization.

“She has firmly cemented herself as a knowledgeable public service professional in our area,” Small-Toney said. “We are confident that our city will see growth in the areas of downtown development, small business growth, affordable housing and more under her leadership.”

Jones will be reporting for work at City Hall in the aftermath of the community and business development department having become a center of controversy earlier last year. That was when questions surfaced about Faulcon’s competency and residency.

Specifically, the Telegram reported that about a year after being hired by Small-Toney, Faulcon continued to live in Virginia Beach, Va., and in Halifax County.

The Telegram also reported that, under Faulcon’s watch, permitting for commercial and residential buildings had slowed to a crawl and key employees in her department had left.

Under Faulcon’s watch, the city also failed to achieve accreditation status with the Main Street revitalization program. Rocky Mount is an affiliate of the program, which in effect is a slip of a notch in status.

By June, Faulcon was on administrative leave and by September, she resigned after she and the municipal government reached a settlement. 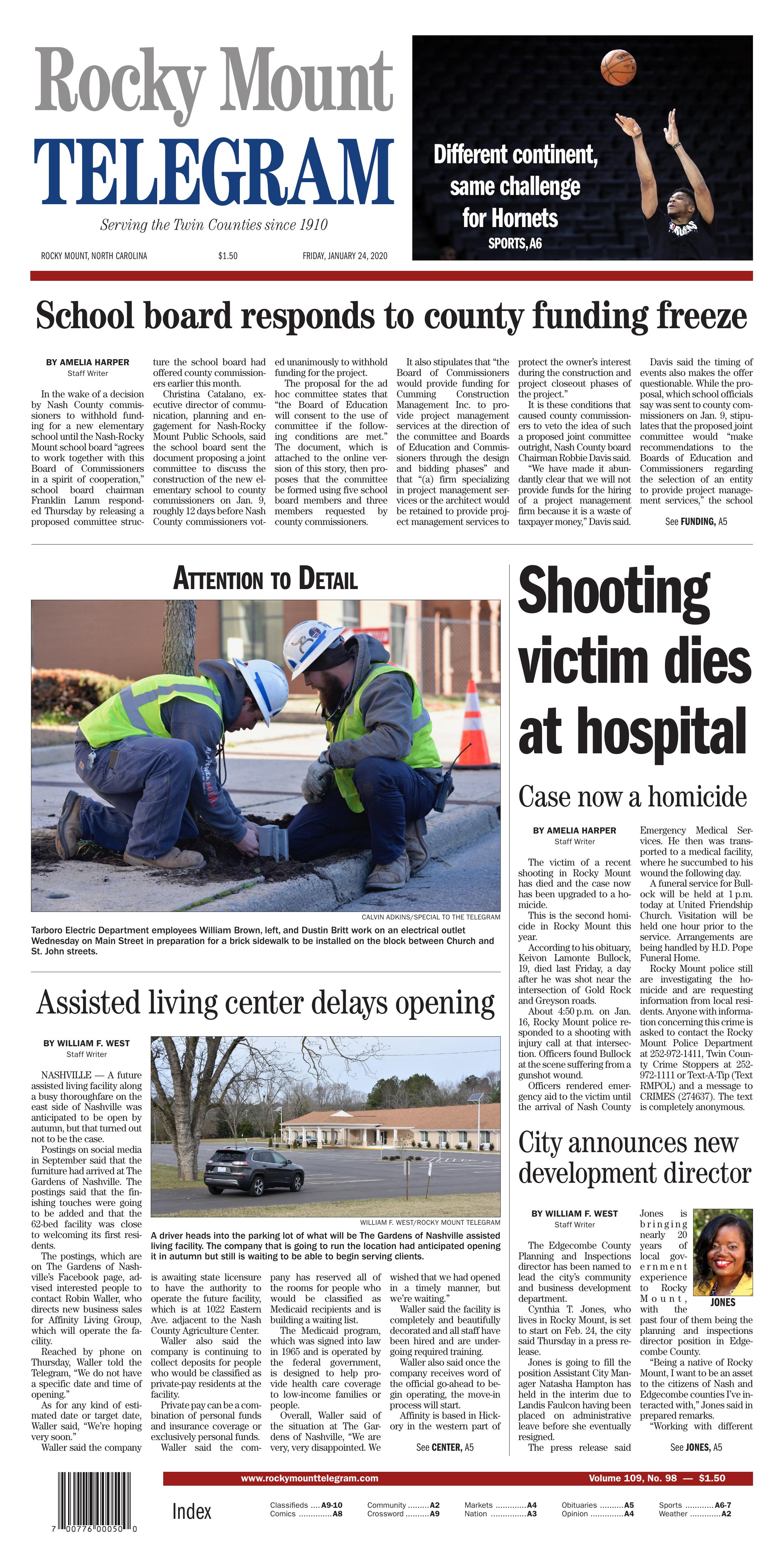