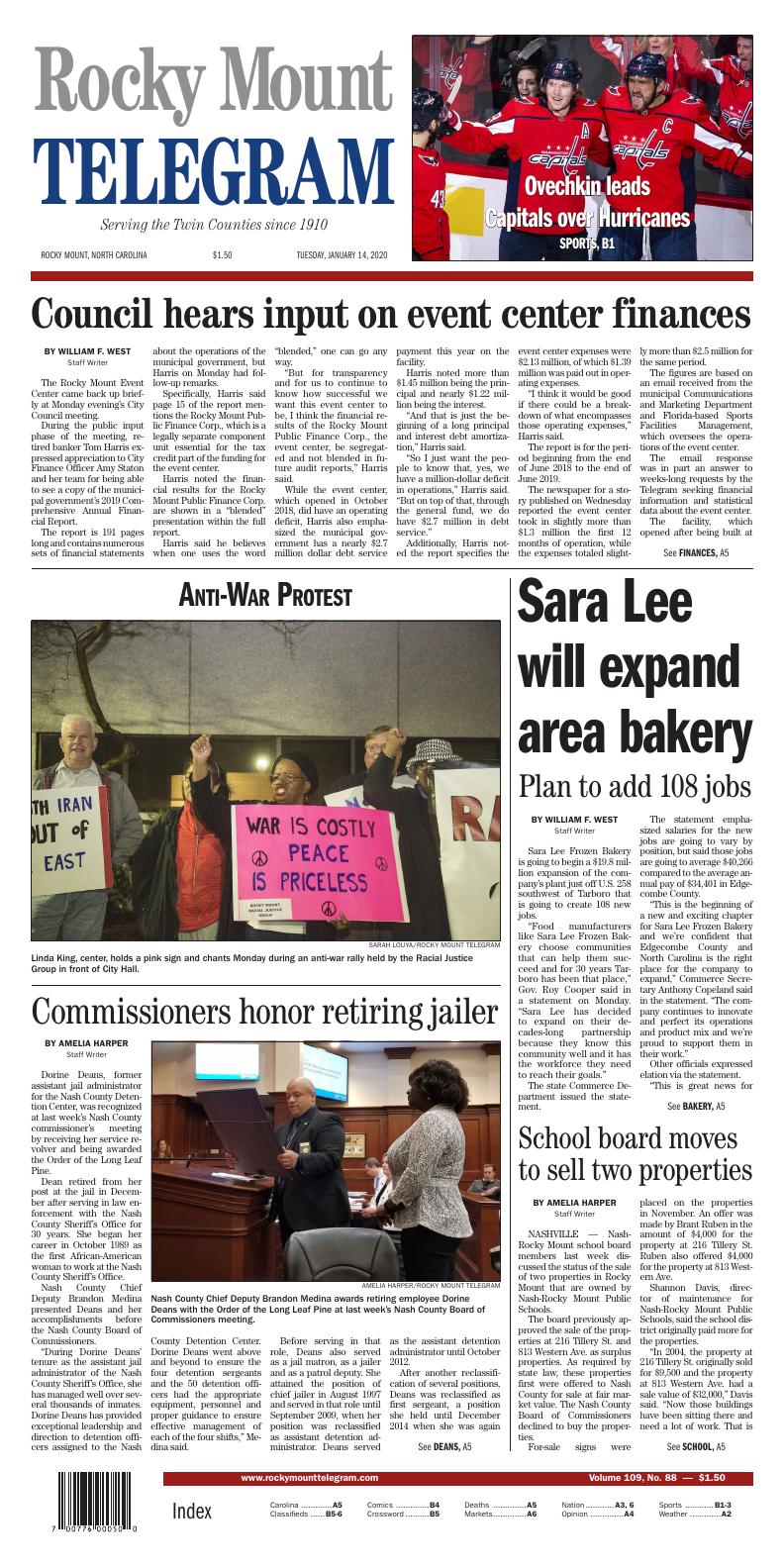 During the public input phase of the meeting, retired banker Tom Harris expressed appreciation to City Finance Officer Amy Staton and her team for being able to see a copy of the municipal government’s 2019 Comprehensive Annual Financial Report.

The report is 191 pages long and contains numerous sets of financial statements about the operations of the municipal government, but Harris on Monday had follow-up remarks.

Specifically, Harris said page 15 of the report mentions the Rocky Mount Public Finance Corp., which is a legally separate component unit essential for the tax credit part of the funding for the event center.

Harris noted the financial results for the Rocky Mount Public Finance Corp. are shown in a “blended” presentation within the full report.

Harris said he believes when one uses the word “blended,” one can go any way.

“But for transparency and for us to continue to know how successful we want this event center to be, I think the financial results of the Rocky Mount Public Finance Corp., the event center, be segregated and not blended in future audit reports,” Harris said.

While the event center, which opened in October 2018, did have an operating deficit, Harris also emphasized the municipal government has a nearly $2.7 million dollar debt service payment this year on the facility.

“And that is just the beginning of a long principal and interest debt amortization,” Harris said.

“So I just want the people to know that, yes, we have a million-dollar deficit in operations,” Harris said. “But on top of that, through the general fund, we do have $2.7 million in debt service.”

Additionally, Harris noted the report specifies the event center expenses were $2.13 million, of which $1.39 million was paid out in operating expenses.

“I think it would be good if there could be a breakdown of what encompasses those operating expenses,” Harris said.

The figures are based on an email received from the municipal Communications and Marketing Department and Florida-based Sports Facilities Management, which oversees the operations of the event center.

The email response was in part an answer to weeks-long requests by the Telegram seeking financial information and statistical data about the event center.

The facility, which opened after being built at a cost of $48 million, is not anticipated to turn a profit for the first few years of operation.

During the public input phase of the Dec. 9 council meeting, Harris called for the panel to provide him and fellow taxpayers information about the financial performance of the event center.

That was after a Dec. 3 report by the Telegram stating the newspaper had at the time been unsuccessful in trying to obtain information about the event center’s finances via the state Public Records Act.

In other business at Monday’s council meeting, the audience heard the municipal government is going to begin working to make city broadcasts of council meetings a reality.

City Manager Rochelle Small-Toney announced she has assembled a committee, led by interim city chief spokeswoman Dorothy Brown Smith, to study and recommend to her the staffing and the capital costs needs associated with televising the council meetings.

Small-Toney said she expects to have follow-up information to share with Mayor Sandy Roberson and the council beginning in the February to March timeframe.

Unsuccessful candidate for mayor Bronson Williams on the campaign trail also stated he believes the council meetings should be broadcast.

Local television station WHIG and activist and videographer Curmilus Dancy II broadcast delayed video of the council meetings. Resident Theresa Alston Stokes uses a cellphone while seated in the audience to show the meetings in real time on her Facebook page. 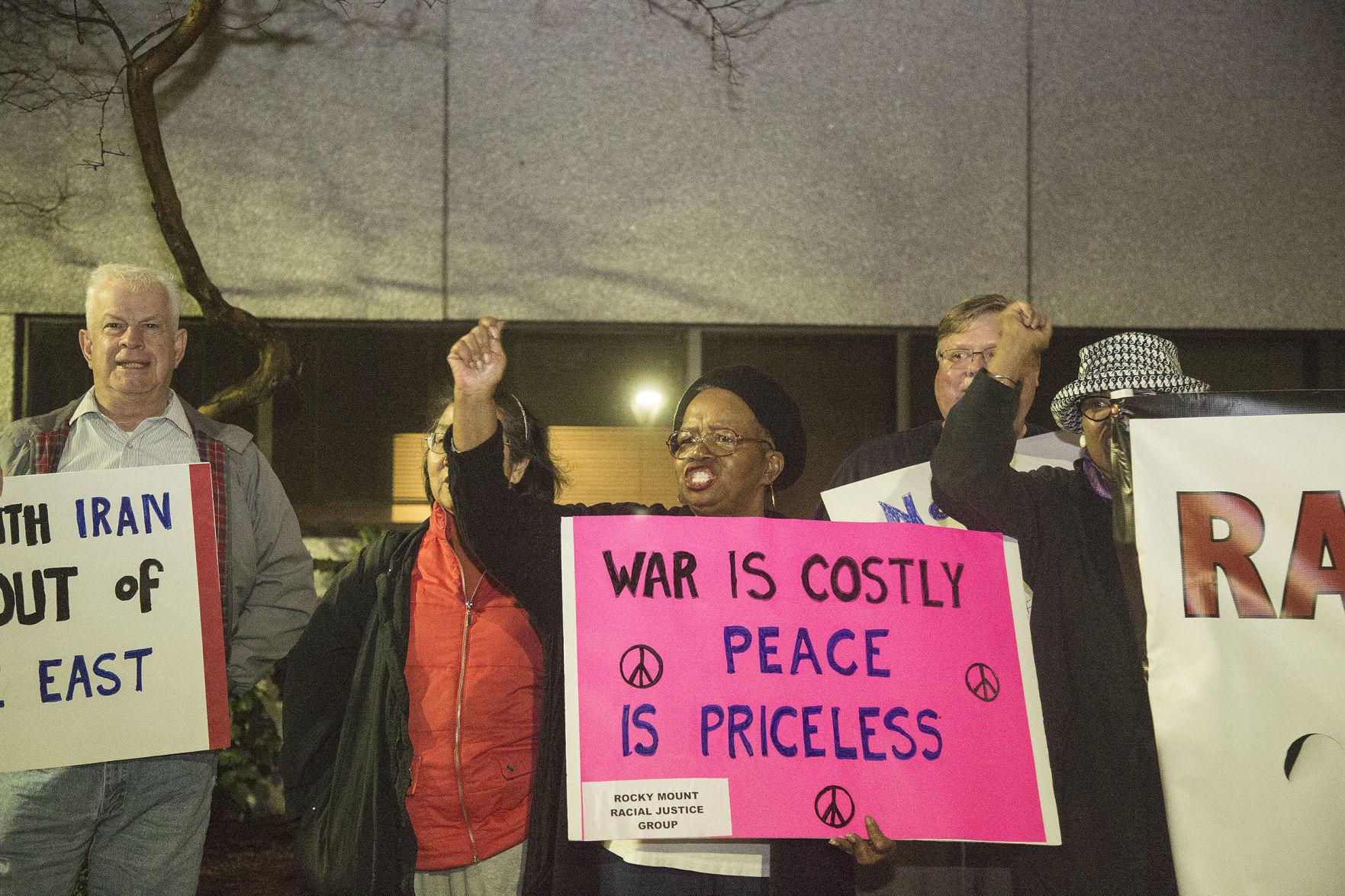 Linda King, center, holds a pink sign and chants Monday during an anti-war rally held by the Racial Justice Group in front of City Hall.

Dorine Deans, former assistant jail administrator for the Nash County Detention Center, was recognized at last week’s Nash County commissioner’s meeting by receiving her service revolver and being awarded the Order of the Long Leaf Pine.

Nash County Chief Deputy Brandon Medina presented Deans and her accomplishments before the Nash County Board of Commissioners.

“During Dorine Deans’ tenure as the assistant jail administrator of the Nash County Sheriff’s Office, she has managed well over several thousands of inmates. Dorine Deans has provided exceptional leadership and direction to detention officers assigned to the Nash County Detention Center. Dorine Deans went above and beyond to ensure the four detention sergeants and the 50 detention officers had the appropriate equipment, personnel and proper guidance to ensure effective management of each of the four shifts,” Medina said.

Before serving in that role, Deans also served as a jail matron, as a jailer and as a patrol deputy. She attained the position of chief jailer in August 1997 and served in that role until September 2009, when her position was reclassified as assistant detention administrator. Deans served as the assistant detention administrator until October 2012.

After another reclassification of several positions, Deans was reclassified as first sergeant, a position she held until December 2014 when she was again reclassified as the assistant jail administrator, Medina said.

Nash County commissioners unanimously approved the motion to present Deans with her service revolver. The motion came after nearly three hours of presentations and public comment concerning the present state of the Detention Center.

“I didn’t particularly enjoy the presentations this morning, but I think it adds a lot to what you have done for Nash County to be here this morning and see the challenges you have faced in your job every day,” board Chairman Robbie Davis told Deans.

Davis said he appreciates the service Deans gave to the county. Other board members repeated their appreciation before giving Deans a standing ovation.

“I know there were better times than this time and I hope that this did not have anything to do with your retirement,” Davis said. “But it makes me appreciate what you’ve done a lot more, just being here today and witnessing the two sides of this opportunity Nash County currently has before them to make things better. I know you were a key part in keeping things together for many years. I am absolutely appreciative of what you have done in a very challenging job.”

Medina also presented Deans with the Order of the Long Leaf Pine at the meeting.

“The Order of the Long Leaf Pine is an honor granted by the State of North Carolina to individuals who have shown extraordinary service to the state. It is the highest award for state service granted by the Office of the Governor. Nominations can be made for individuals with 30 years or more of service to the State of North Carolina,” Medina said.

In response to these accolades, Deans’ comments were short and sweet.

“The only thing I want to say is to God be the glory for what he has done for me,” she said. “And I am looking forward to my retirement.”

Sara Lee Frozen Bakery is going to begin a $19.8 million expansion of the company’s plant just off U.S. 258 southwest of Tarboro that is going to create 108 new jobs.

“Food manufacturers like Sara Lee Frozen Bakery choose communities that can help them succeed and for 30 years Tarboro has been that place,” Gov. Roy Cooper said in a statement on Monday. “Sara Lee has decided to expand on their decades-long partnership because they know this community well and it has the workforce they need to reach their goals.”

“This is the beginning of a new and exciting chapter for Sara Lee Frozen Bakery and we’re confident that Edgecombe County and North Carolina is the right place for the company to expand,” Commerce Secretary Anthony Copeland said in the statement. “The company continues to innovate and perfect its operations and product mix and we’re proud to support them in their work.”

Other officials expressed elation via the statement.

“This is great news for our community,” state Sen. Milton F. “Toby” Fitch, D-Wilson, said. “These good paying jobs will lift up more families in Edgecombe and surrounding counties and benefit the entire area.”

“We’re proud to call Sara Lee Frozen Bakery one of our largest employers,” state Rep. Shelly Willingham, D-Edgecombe, said. “We’re excited about this new phase in their plan for growth. We know they’ll continue to thrive in Tarboro.”

The announcement comes approximately 3½ months after a celebration of the plant’s three decades in operation.

Sara Lee Frozen Bakery, which is based in the Chicago area, was formed in 2018 as a result of a sell-off by Arkansas-based Tyson Foods to a private equity firm, New York-based Kohlberg & Co.

The plant in Edgecombe County employs more than 650 people and produces a variety of frozen bakery and dessert products, including biscuits, brownies, cheesecake, croissants, muffins and pound cakes.

The Sara Lee brand can be traced to the 1950s, when Charlie Lubin, a bakery entrepreneur, decided to name his new line of cheesecakes after his daughter.

The statement from the Commerce Department said $500,000 from the One North Carolina Fund is going to help pay for the expansion of the plant in Edgecombe County.

And this hardly the first time the plant has been the scene of a major investment.

In early 2016, Tyson subsidiary Hillshire Brands announced plans to upgrade and improve the location, creating an additional 98 jobs. The One North Carolina Fund also helped pay for that project.

And in 2000, the Telegram reported the plant was undergoing a $35 million renovation and expansion.

Sara Lee Frozen Bakery has two other plants. One is in Michigan and the other is in Massachusetts.

“In 2004, the property at 216 Tillery St. originally sold for $9,500 and the property at 813 Western Ave. had a sale value of $32,000,” Davis said. “Now those buildings have been sitting there and need a lot of work. That is the reason we wanted to receive an offer and start an upset bid process.”

On Thursday, the school board rejected those bids and interim Superintendent Del Burns recommended that the board authorize staff to initiate the upset bid process with a starting bid set by the attorney. That minimum bid will be $4,250 for each property, school board attorney Rod Malone said.

The school board voted 10-1 to accept this recommendation with Bill Sharpe as the lone holdout.

During the discussion, Sharpe said he felt the City of Rocky Mount should be offered the opportunity to purchase the property in the same way that Nash County had.

“There are a lot of things happening inside the city that might help develop the community in that area,” Sharpe said. “So there may be plans that someone in the city could help redevelop those housing needs inside the city itself.”

Sharpe noted that the board did offer the Spaulding Elementary School site to the Town of Spring Hope when it was put up for sale. In that case, the town was already using that facility for certain functions. However, other board members noted that O.R. Pope Elementary was not offered to the City of Rocky Mount when it was sold.

Malone said that offering the properties to the city was not required by law but was allowed.

“You are not required by statute to do that — but if the board directs that, you could,” Malone said. “It would have to be offered for the fair market value. ... That may or may not be the tax value or some appraised value. With the upset bid process, wherever that ends is deemed the fair market value.”

In the end, the upset bid process remains in place and the City of Rocky Mount has the same opportunity to bid as other entities. This process may go on for some time, Malone reminded the board.

“Depending on the interest in the property, you may get a lot of minimum bids, especially as you start in this range, “ Malone said. “As the board may recall, we went through 17 or 18 rounds of bidding with Spaulding and 15 or 16 rounds with Pope. It is quite possible this could go on awhile.” 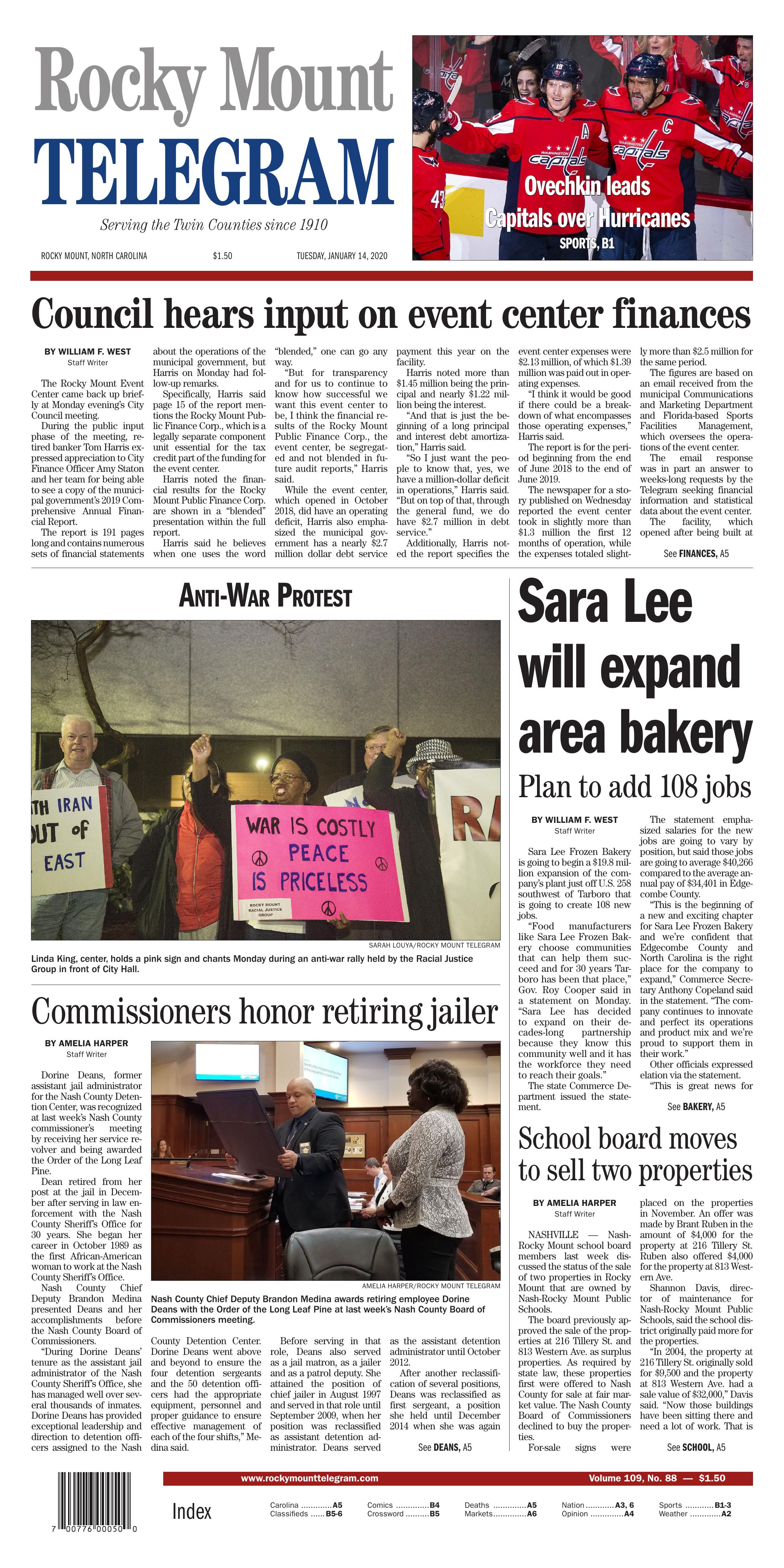